Mansion of the Brain Fogs

The animated Asterix movies have generally been rather disappointing in how they take the wonderfully satirical books and turn them into lushly drawn pieces of mediocre stories that only display a fraction of their intellect. Often enough, relying more on stretch-and-squash animation for humour, rather than their playful wordplay they were better known for.  Ironically enough, the first Asterix movie was decried for being TOO faithful to the book, being little more than a straight retelling.  Other movies padded out their length with unnecessary songs and animated pratfalls that hardly contributed overall to the story.

So it was something of a pleasant surprise to see an animated adaption that actually managed to live up to the quality of the original.  What made this trailer sell it for me is the humour that while shows aspects of slapstick, also has moments of intellect that are on par with the books themselves.

Mansion of the Gods is one of Julius Caesar's most subtle plans - rather than try to conquer the indomitable village through means of force, he intends instead to bring the mountain to the molehill by transplanting Roman Culture right in their backyard. Of course, this plot is faced with resistance from the construction, and the Gaul's reluctant to allow any building flats to be built in the first place. But when they see that their efforts to impede the buildings get completed means that the slaves will wind up working long hours for nothing, they decide to intervene by giving the slaves a dose of their magic potion. However, this backfires as the slaves, rather than use their power for escaping, use it as a bargaining position for freedom and better pay once the buildings are done.

When the Roman tenants move in, the Gaulish village is faced with the prospect of making money off their bartering system and figure they want some of that action, which causes divides between those who want to keep their old lifestyle, and those who see an opportunity where none previously existed. 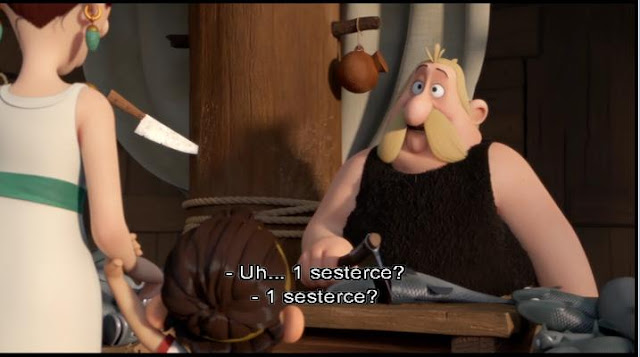 There are a few instances of historical anachronisms, but nothing pop-cultural that would be considered obsolete within a few years.  Another welcome change is having the overused Centurion Voluptuous replaced by Centurion Somniferus (who's never referred to by name) since he's more typical to the Roman guards surrounding the village who aren't normally corrupt, and are constantly exasperated at their troops.

While the English subtitles have the advantage of being faithful to the translated names, there are a few instances that could've been better rewritten to capture the same tone as the books.

One of the greatest enjoyment from the Asterix books is the list of varied punny authentic-sounding names for new Romans, and this movie gave us several, ranging from Giveusabonus (Anglaigus), Anonymous (Petiminus) and Mischiefus (Apeldjus).  Yet for some reason, there's a different turn of phrase between the trailer and the translated version.

This isn't the only instance where the trailer was different from the movie.  In the book, the scene where Chief Vitalstatistix asks his Gaulish warriors if everyone's had their magic potion (to which Obelix bluntly replies a flat "no") has two different takes in the trailer and movie: 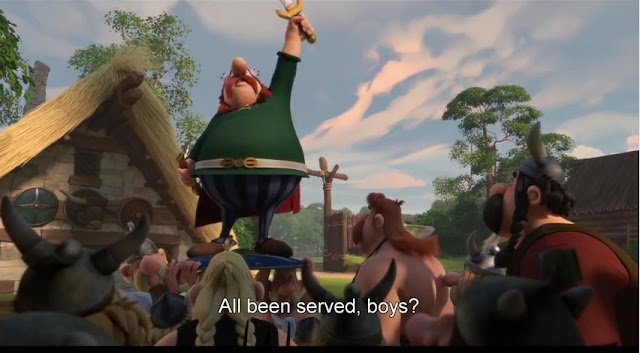 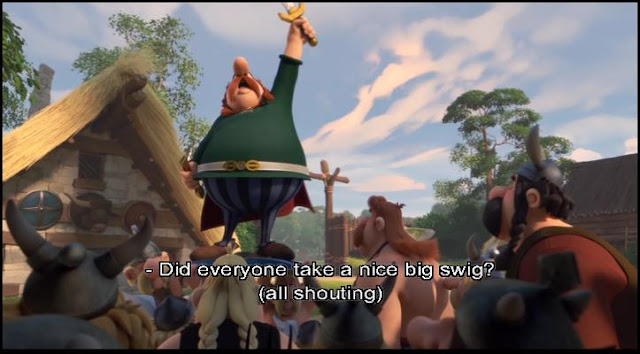 One more changed scene near the trailer's end was where a Roman Legionary was about to taste some of the Magic Potion that gives Invulnerable Strength(TM), when he's interrupted by Obelix at the crucial moment: 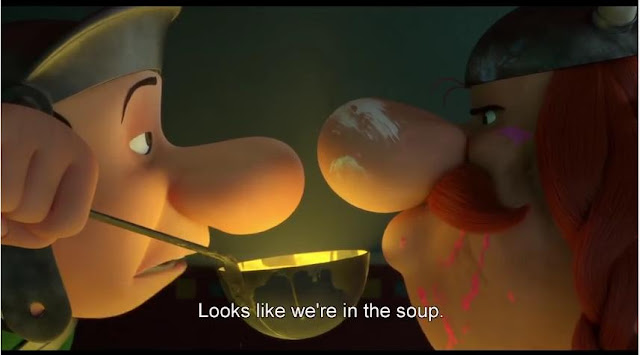 This wonderful pun was given a slightly less effective (if equal meaning) treatment in the movie: 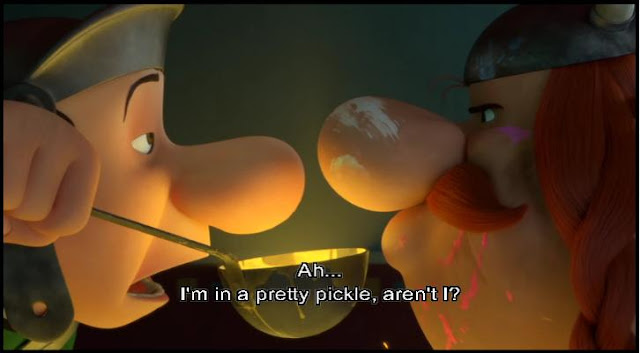 Of course, it's not only wordplay that's objected to, but the lack of usage of certain terminology that would be immensely familiar with fans of the books.  Earlier, there was Unhygienix's confusion over how much Sesterce his fish cost, as opposed to a single Sestertius, or more commonly known from the proper plural of Sestertii.  Likewise, everybody knows the proper name for the oval stones Obelix carries behind his back, and occasionally teaches Doxmatix to catch.  What we get instead is a more literal name for Menheirs.  Doesn't exactly roll off the tongue, does it? 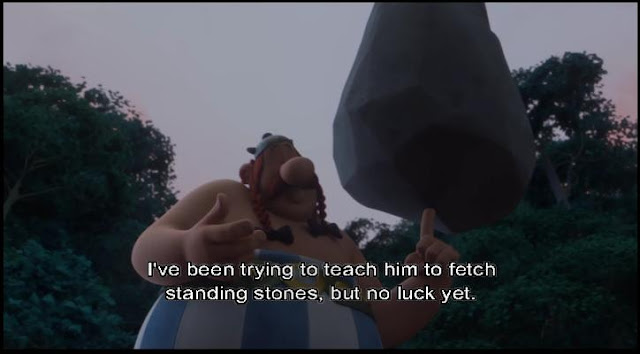 By far, the biggest indignity is neutering Obelix's trademark catchphrase, "These Romans are crazy!" with the following: 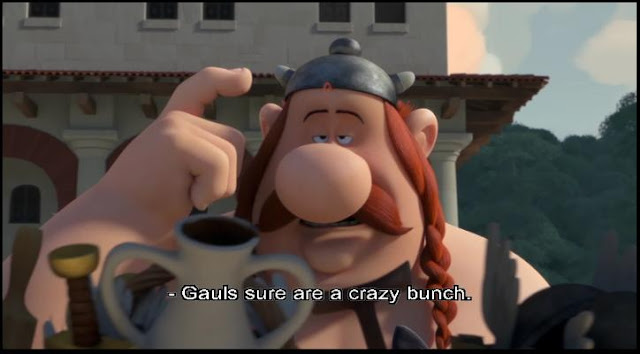 It feels like the translation could've handled another proofreading from someone who was a fan of the books, and not just the names. At least they're better than the online translated subtitles which is just the original text gone through GoogleTranslate with lousy timing reminiscent of Chinese subtitles.  (Which are more annoying and incomprehensible than funny, certain exceptions notwithstanding)

Despite these quibbles, Asterix: Mansion of the Gods is a worthy watch worth repeat viewings, which shouldn't be considered surprising, since one of its co-directors was Louis Clichy, a former Pixar animator (Wall-E and Up).  The other, Alexandre Astier worked on Kaamelott, a humourous take on the King Arthur legend, which I know little about, and will reserve judgement, since it seems somewhat popular. 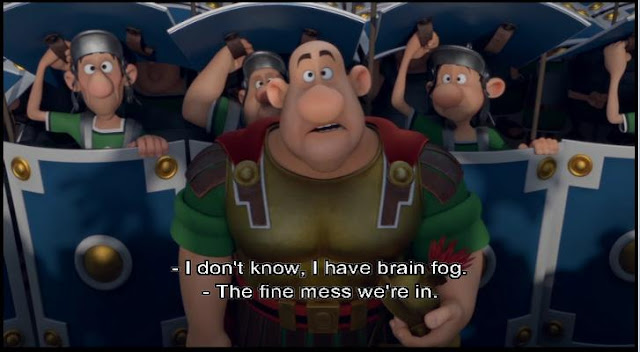 One last thing - Brain Fog is more of a French idiom than an English one, and its inclusion feels slightly clumsy.  A better saying would be "I don't know, I'm all confused."
Posted by DeBT at 10:46 PM