It's recently been announced that The Legend of Zelda comic that ran in Nintendo Power was an instant bestseller on the sales chart, which isn't too surprising given the nostalgia factor and that there hasn't been a reprint for years.  I'm still awaiting another collection of the Mario comic from that same magazine, in all its glorious insanity.  Strangely enough, an earlier reprint had an extra comic including Wario, but not the follow-up segment where Princess Peach wanted a Samus Doll (in conjunction with Super Metroid that was coming up that year)  It was written by the author of Even a Monkey can Draw Manga, whose satirical advice still seems relevant years later, and the prediction that Ninja manga would make a comeback a decade before Naruto came onto the scene.

The Nintendo Power comics were also notable for introducing elements that would later be added to their games, such as Luigi's crossdressing, fear of ghosts and Peach being a badass (which eventually led to noble attempt Super Princess Peach, the only game where PMS is a Superpower)  The other two comics, StarFox (the prototype for Krysta) and Metroid (the Chozo, the annoying male partner) had lush art, but were less comedic.  I was surprised to find out the artist for both was Japanese, since it certainly didn't fit the usual profile.  (I don't consider the detachable Pokemon Fumetti or the Blast Corps comic with its serious American art to count)  Possibly on the minus side, we never got to see Friendly Floyd in any games, even though he's along the same annoying lines as Stanley the Talking Fish, which is strange considering the weird popularity of loathed Tingle.

Being bereft of any comics that adhered to my taste, the Mario and Zelda additions were a welcome (if temporary) addition, and I was sorry to see them go.  I would've killed to have the surplus of material that's available today.  Even withstanding the German Mario comics that had Necronomicon readings, Cthulhu parties and Zombie Peach.  I would've gone for the latter, even if it ended on an ambiguous note.  Just look at all the craziness present.  Despite the wonky writing, they're even more hallucinogenic than the games themselves!
Nintendo Power wasn't the only gaming magazine out there, but in terms of comic content, it was the most memorable.  There are Howard and Nester scans are available online, but when it comes to a segment of other Gaming Magazines that also had comics within its pages, their presence is strangely absent.

Or maybe not.  The founder of Gamefan Magazine, Dave Halverson, has mentioned several times that he doesn't want copies of his magazine available online, so websites that have declined to be faced with lawsuits have followed his wishes.  Most gaming magazines are little more than glorified advertisements and hyperbolic excitement (save for the shining example of game journalism of Next Generation, which were above the usual grade) and for awhile, mentioned that interested parties could purchase digital copies online.

This seemed to work for awhile for the first three issues with promise of more to come... until the GameFan store suddenly went under, leaving curious parties and nostalgic fans out in the lurch.  To add insult to injury, the replacement GameFan online shop no longer bothers to sell magazines, and is now regulated to selling games instead.  Might as well cut the middleman, amiright?

Even though the majority of the online world seems willing to abide to his wishes, it may have the unintended consequence of backfiring on potential customers who may not be aware that such things exist.  Since there's no concrete way to tell which magazines have the relevant content that we'd be most interested in, it makes it harder to make a blind purchase just to look at 3-4 pages of a silly comic.  Especially since today's gaming audience are more likely to wean their experience on online manuals that'll give step-by-step instructions.

This is somewhat of a shame, since the appeal of game magazines (apart from seeing your favorite games given coverage) is from the various layouts designed to capture your eye (of which GameFan was an expert in) where other magazines were devoted in seeing the amount of advertising space vying for your attention.  Anybody remember the numerous various of Fritz... for the Don Bluth inspired BrainDead 13?  "Fritz... He's a real %$#@!"  "Fritz... He can only count to two." 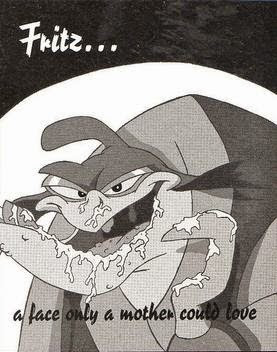 These gaming mags were also our first peek at the blooming interest in Anime, with interest in titles such as Ruronin Kenshin and Flame of Recca.  Their choice of screenshots could give the sensation of seeing the action happening between frames. 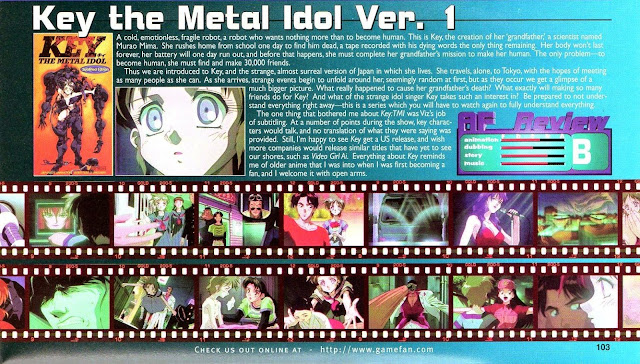 For all its good points, GameFan wasn't without its flaws.  It was notorious for praising games up to the skies, if they fit to a reviewer's preferences, and give low scores for other elements, such as disagreeing on the style of music playing.  And it would pander to the male gaze.  To get an idea for how they represented the staff avatars, they were shown in typical Liefeld caricatures that I was notoriously ignorant about, since I wasn't the target audience.  To get an idea of what comics in the 90's were like in a gun-crazy culture, these panels from Archie's TMNT spinoff, Mighty Mutanimals may help my point. 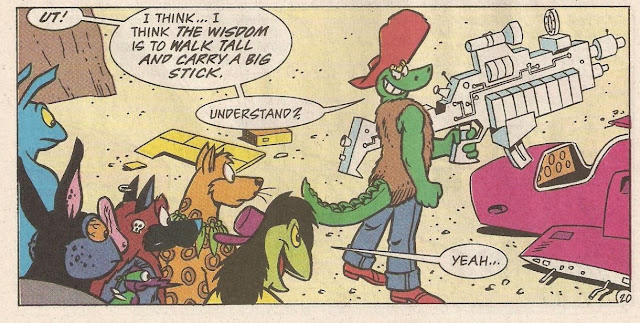 One common trait was to give heroes bulking biceps, persistent scowls, and have them lug around honking huge guns.  Having loaded their weaponry with load to spare, and going on a trail of bloody vengeance, the animals march their way towards their target... 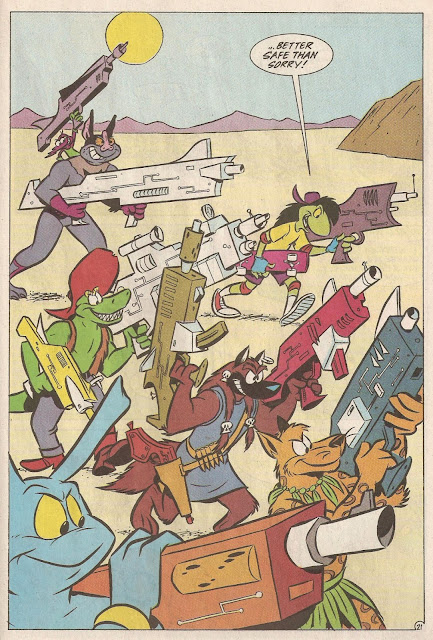 Only to wind up completely exhausted after walking around with heavy pea-shooters.

Adventures of Monitaur, drawn by cover artist Terry Wolfinger, featuring the writers of GameFan (some who used multiple shared aliases) and the titular character who was basically The Tick with a computer screen for a face. 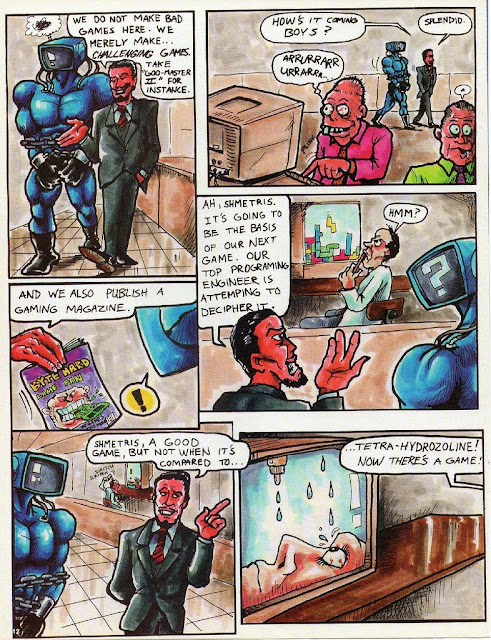 His mission was to protect gamers from purchasing intentionally shabbily made games whose only intention was to make a quick buck.  Amusingly enough, this last game would be a regular feature for WarioWare.

The origins of Monitaur had its humble beginnings as a doodle in the DieHard Gameclub, before being considered a potential mascot.  Beyond that, I have no idea how he initially started out, since he's little more than The Tick with a computer screen for a face.

But for origin stories designed to provoke a reason for indulging in the dangerous world of game reviews, none does it better than the second half of the GameFan mascot; The PostMeister. 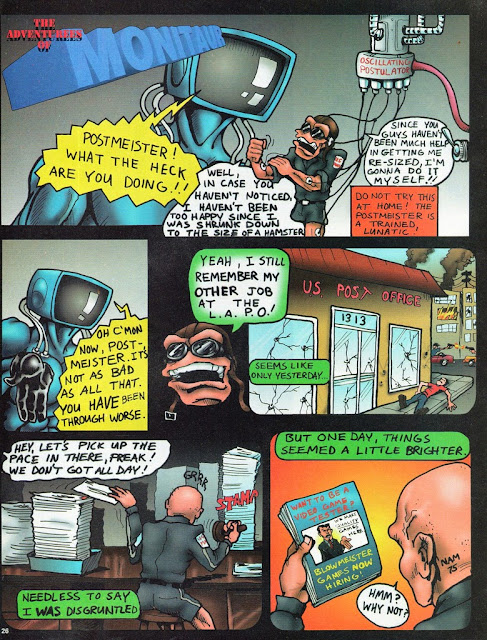 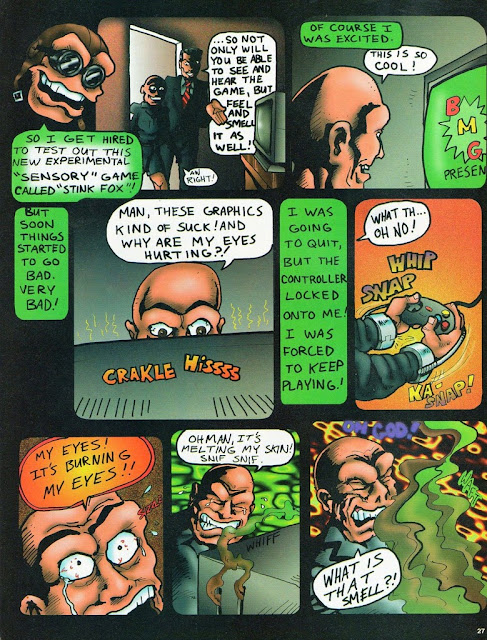 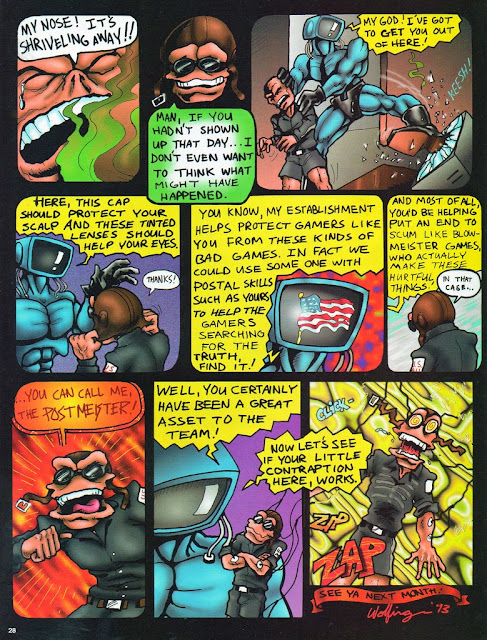 Going further along the S-hero analogy, they would routinely face off against the dreaded Blowmeister, who was an expy for rival gaming magazines, such as Electronic Gaming Monthly, and was routinely portrayed as a Mother Brain figure.  One of their last encounters had said Blowmeister's head dropped into a vat of hydrochloric acid, which would've ended things there... or so we thought.

The next issue opened up with a cute 'lil innocent-looking striped-shirt kid sucking on a lollypop who as soon as he was within the Monitaur's hideout, suddenly started bulked up and looking massively non-cute with straining veins and revealing that the man they'd killed was his Father, and he wanted revenge.  He put up a good fight despite having gone through multiple dangerous operations, but in the ensuing scuffle, a team member wound up unintentionally killing him by ripping his blood bags off him. 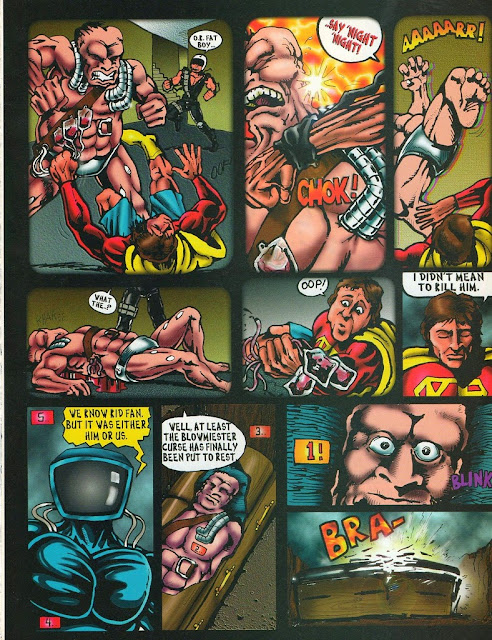 Of course, you can't get rid of a persistent enemy that easily, and he self-destructed via a dead man's timebomb, spreading his body parts all over the landscape, infecting his mind on any nearby animals, no doubt popularizing on the extreme coverage of Earthworm Jim. 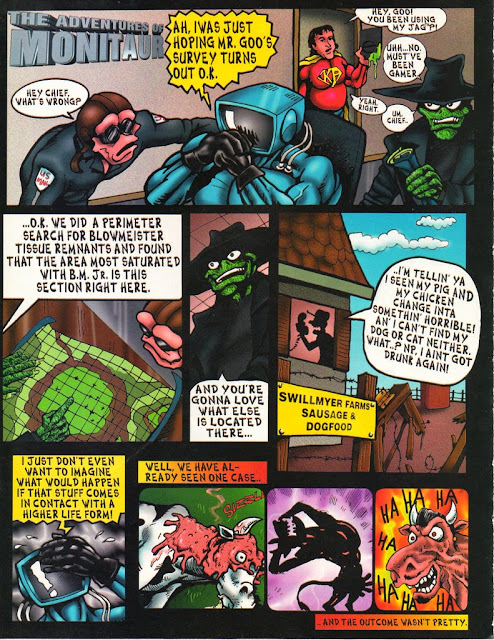 This led to the next two issues of conflict where the GameFan team wound up in that most Shonen-like cliche of resolving conflicts - via a tournament.  But this was no ordinary tournament - this was more along the veins of Mortal Kombat, Primal Rage, and the dozens imitators they spawned. 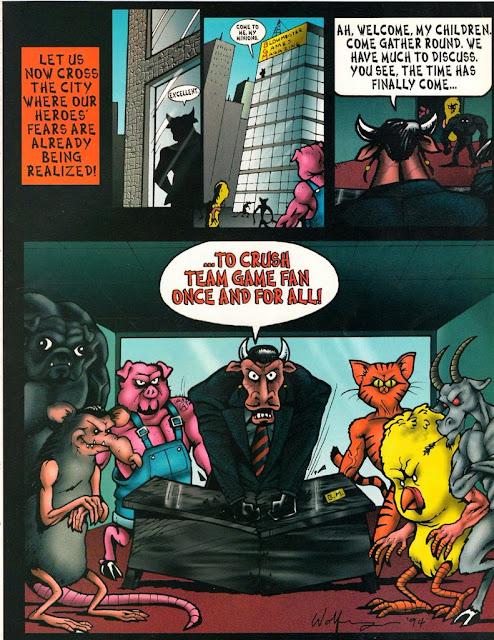 They ran through the ranks of increasingly stronger opponents, to finally come up to the Bull Boss... who was somewhat anticlimaxically defeated in a few panels.  Monitaur asked the editor if this was finally the end of this reoccurring villain, and was reluctantly confirmed in the affirmative.

After defeating the Big Bad once and for all (for real this time!) and it was for real, the comics seemed to suffer from a sense of aimlessness.  Without an overarching villain to unite them together, they resorted to the promotional gaming cameos for whatever system was deemed "hot" at the moment.  These segments wouldn't be too bad in themselves if it weren't for the fact that the author couldn't figure out how to end these stories on their own, and left it entirely up to audience participation. 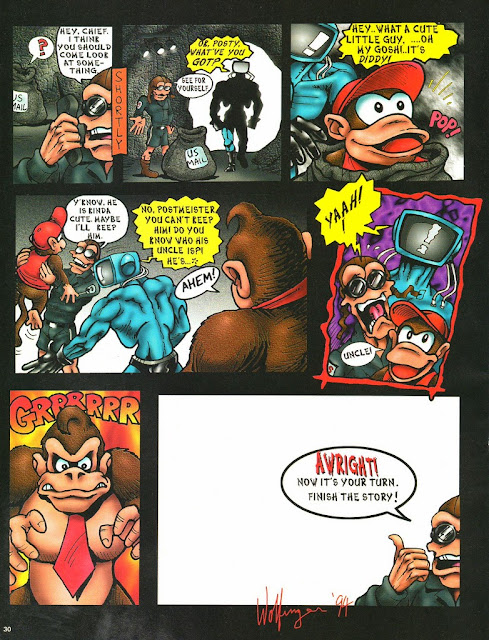 Asking readers to finish a story of continuous build-up into one solitary panel might've been asking for too much.  If there was some kind of collection (ironic, considering the PostMeister was in charge of the mail) surveying their attempts, this might've been salvaged.  But there never was any attempt at follow-up, either because of reader's lack of interest, or faulty memory for something that happened months ago, and who'd have the time to focus on that when there's all kinds of new games to lord over?  So, in a strange way, Blowmeister wound up defeating GameFan after all.  (Though from going through the unbelievably true horror stories in the background, they may have dug their own grave themselves)

From the link above, some more comic pages can be found right under the legendary "Cybermorph review" that was written on acid, giving overzealous praise of "surreal planet sounds" and "aware enemies" for a second-rate 3D shooter.

It'd be nice to have a full collection of these Adventures of Monitaur, if only for their appreciation of ludicrous elements, much like warped historical artifacts that could've only existed in their time.
Posted by DeBT at 8:01 PM