Just recently, I was introduced to the welcome and long overdue news that one of my favorite Mangas, Franken Fran was finally licensed.  Way back when David Welsh was looking for appropriate Horror-themed titles, I suggested this title in his comments, which he later posted two days later.  It's one of the few instances that I'm grateful for being called out for my contribution. 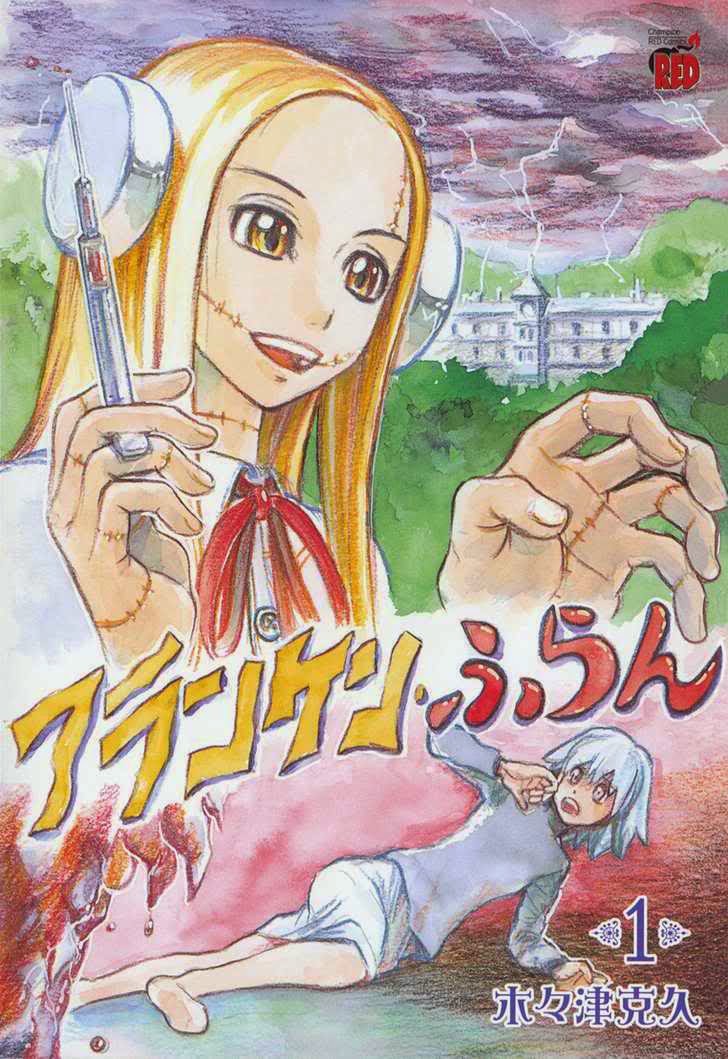 "I like to think of Franken Fran as Pinoko all grown up, and being raised with the Doctor’s medical skill would make her a prime candidate for doing outlandish operations that would be banned in any country. Admit it – all the elements are there – she’s a childish tumor with no qualms of ethics or humanity, and enjoys operating madcap experiments that would make Desty Nova proud, just for the fun of it."

Part of the appeal is the ditzy "Mad Scientist's Beautiful Daughter" trait taken upon its head by having said makeshift Frankenstein daughter fill in for the Professor's absence, which allows her to do all kinds of weird experiments on an unsuspecting audience who only expect the best of her service.  Despite her ditzyness and ability to cry at a client's prospective plight, her dexterity and multi-tasking is far beyond the realm of mere mortals.  Furthermore, she accepts all her clients wishes without judgement, no matter how outlandish they may seem.  Need to repair your failing eyesight?  Just upgrade to a broader spectrum where you can see radio waves.  Want to become immortal?  Just inject yourself with Cancer cells.  Her descriptions of horrific medical terms is put in such a  matter-of-factually way that it's hard to stay mad at her otherworldy detachment to the subject.  A certain amount of desensitization is necessary for surgeons to succeed in their operations.  A doctor who faints at the sight of blood is probably in the wrong line of work.  (Though one that could operate blindfolded and work by touch would be interesting, if practically limited)

Considering the amount of medical skill she displays, and that she's only his assistant, the Professor's (who's often referenced to, but never seen) ability must be on a truly staggering level.

While the majority of Franken Fran is standalone stories, there's a reoccurring theme where the Professor's other daughters resent Fran's usurping what they assume should be their job, but since their talent lie more on assassination than saving lives, they're not really suited for it, and despite their bloodthirstiness, they're far less frightening than the girl who's casually rearranging your inner guts to save your life.

It's certainly gained something of a cult following, and was one of the first series that I helped foster some interest in for a reluctant blogger who was put off by the cheesecake covers (which are blatant lies that don't reveal the gruesome science behind them)  For a long time, I thought it'd never get licensed, due to one of the early chapters having an unusually ambiguous ending that was a culturally specific urban legend that's rather obscure.  Whether the notes will be as extensive as the scanlators' will be undetermined.  Even if that remains a mystery, the majority of the series is enjoyable for its satirical black humour and would be a natural progression for fans of Black Jack.  Of all the Mangas influenced by that classic (and there are many), Franken Fran with its multitude of mad science and condensed storytelling is easily the best.

However, there was only ONE story that I was reluctant to re-read again, amidst stories of a cult based around a macroscopic human circulatory system and anthropomorphic transplanted human limbs.  (I've read a lot of Shintaro Kago stuff)  That one story involved a specific type of plastic surgery. 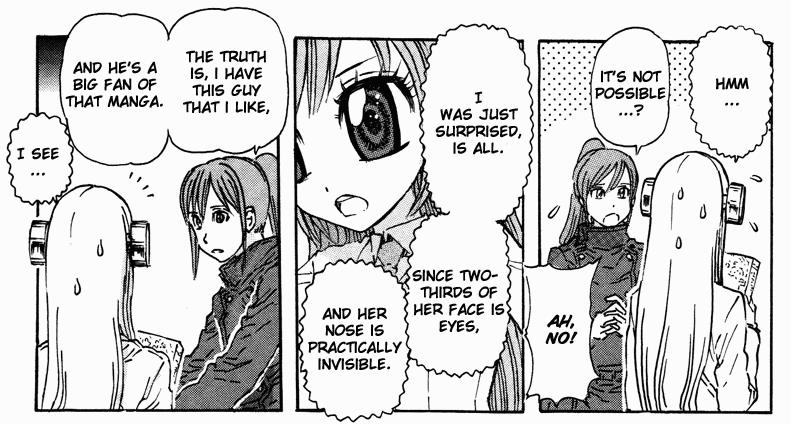 While there were other stories that involved bodily mutilation to achieve changing genders or achieving immortality, those weren't as disturbing to me as this one.  In this instance, the client wanted to have her appearance changed to become more appealing to her boyfriend.  While putting on a false front to appear more attractive is nothing new, this goes far beyond the realm of applying permanent makeup.  No, what she wanted was to look like a character from a popular Shoujo Manga. 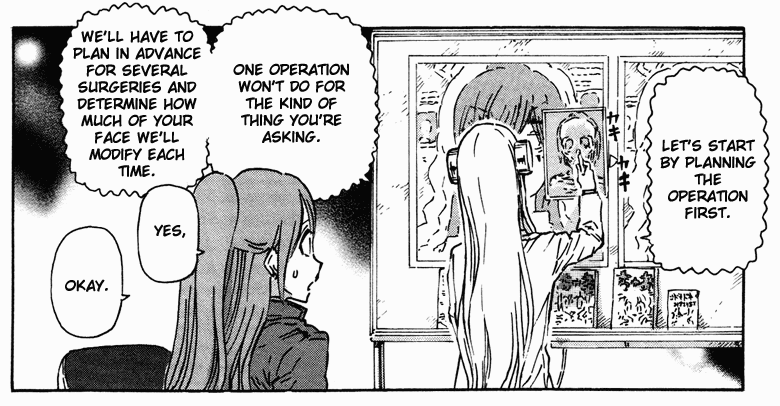 The characters are already cartoonily exaggerated, so taking that prospect further just raises the shackles for me. Not to mention that Asian people's self-respect about their epicanthic eyes is a self-image problem.  It strikes too hard to me for a series that plays fast and loose with medical plausibility. 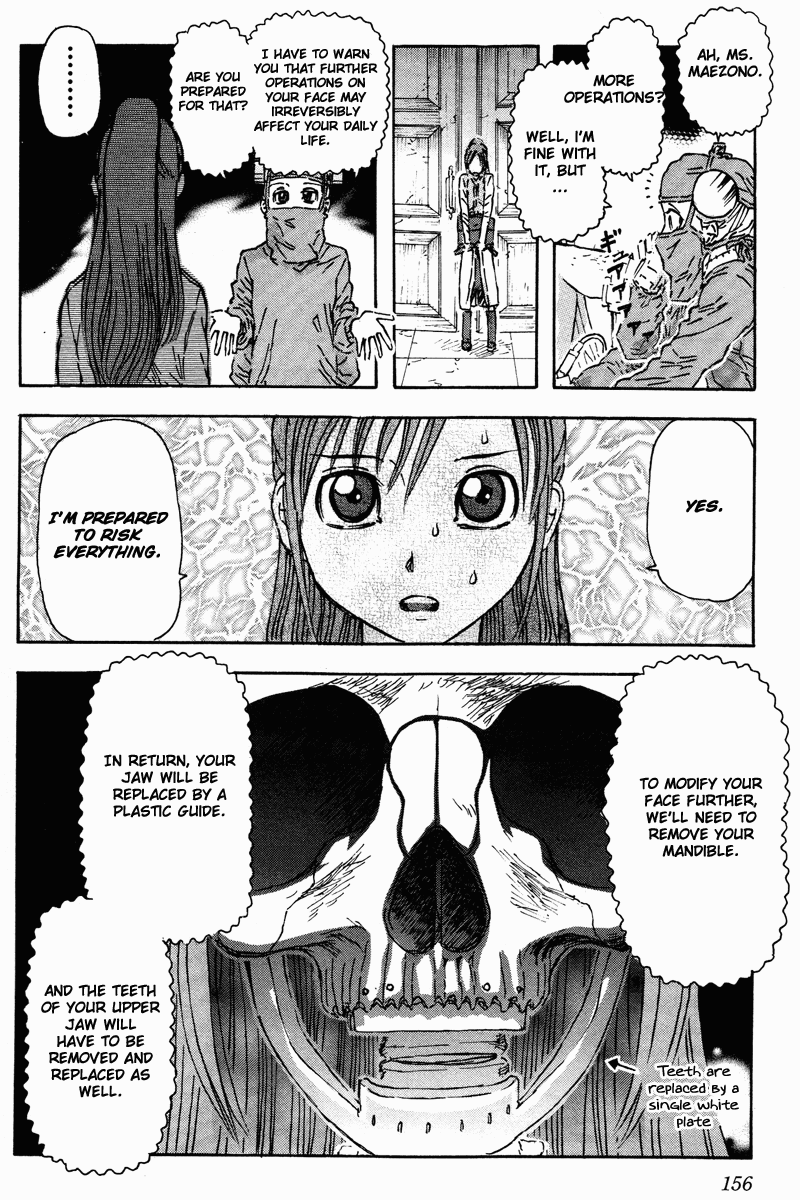 As if the process of maintaining an already impossible body figure wasn't bad enough, she's regulated to a state of constant check-ups and monitoring to the point where her existence is limited to just appearing beautiful.  She has to be on a very limited and restricted diet due to the amount of food she can fit in her mouth, and lie in a tank of nutrients to cultivate her unnatural body image.  It's awkwardly similar to Michael Jackson's post-surgical conditioning. 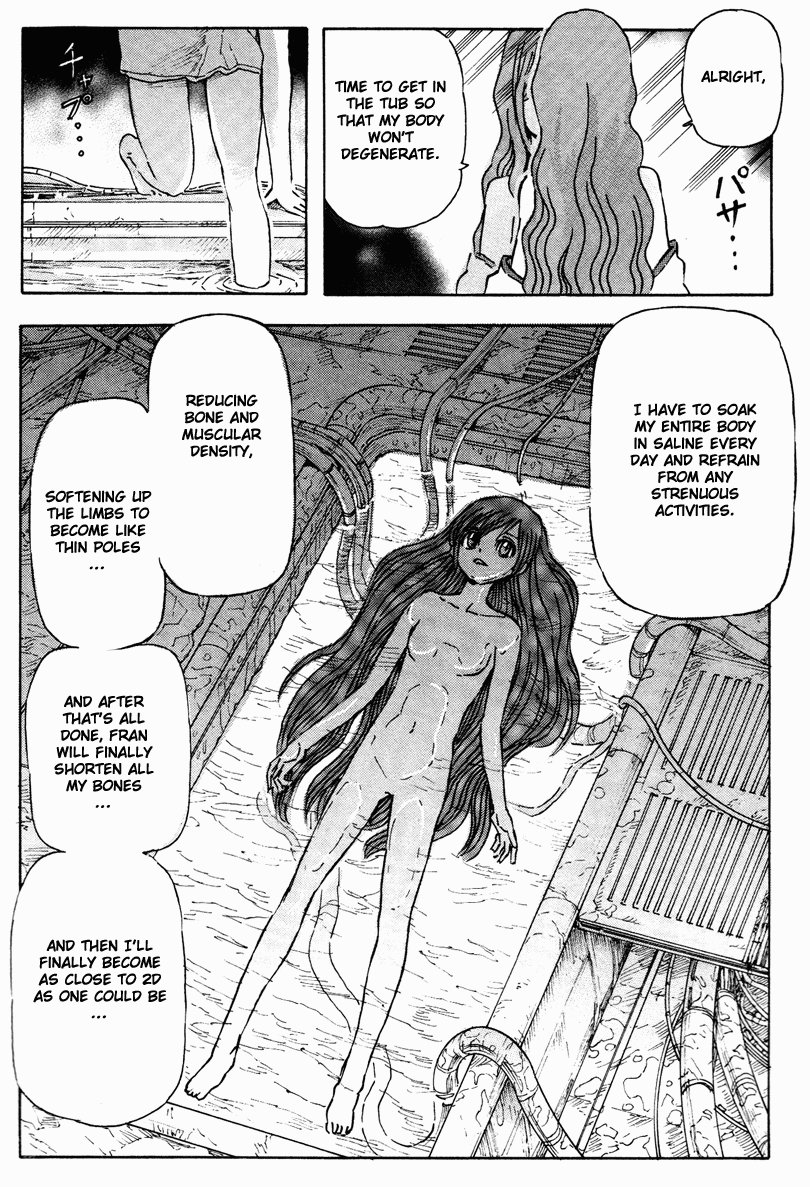