While known for its portrayal of sophisticated kids commenting on everyday life, Peanuts is best described and known as a strip on unrequited love.  Lucy is obsessed with Schroeder whose primary interest is Beethoven.  While passively chased by Marcie and Peppermint Patty, Charlie Brown is forever obsessed with the Red-Haired little girl and has also had occasional flings with Emily and Peggy Jean.  On the bizarre scale, there was Sally and her School Building, who unexpectedly committed suicide.  Even Snoopy isn't immune, having fallen prey to a bride who ran away at the last minute.

And then there's Linus. 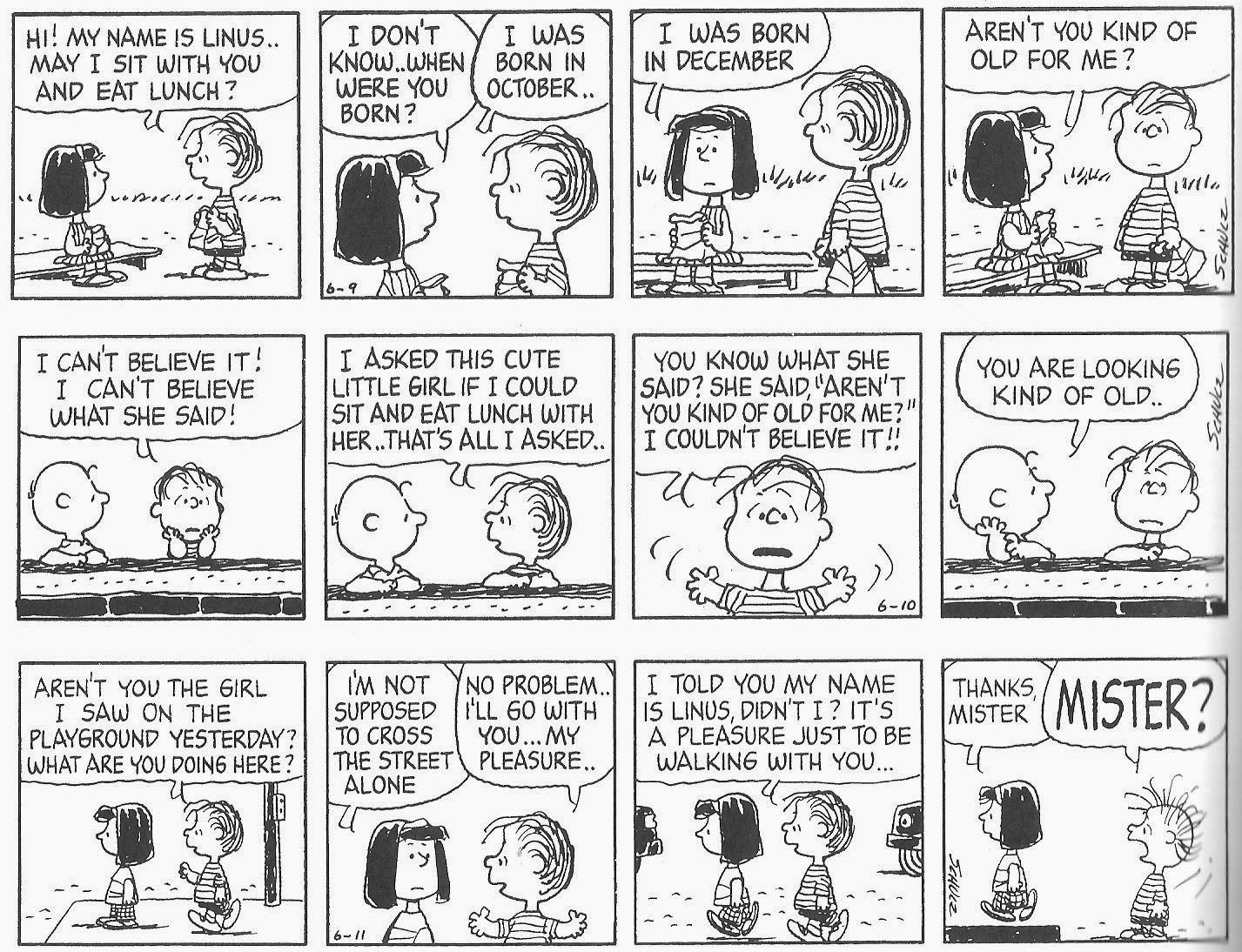 While Walt Disney thought himself as Mickey Mouse (who appeared in 10 animated shorts), his animation employees related him closer to the violate and explosive Donald Duck (who had 200 shorts).  By the same token, Charles Schultz thought of himself as constantly put down Good Ol' Charlie Brown, but his creative avatar was through the talented and thoughtful Linus. 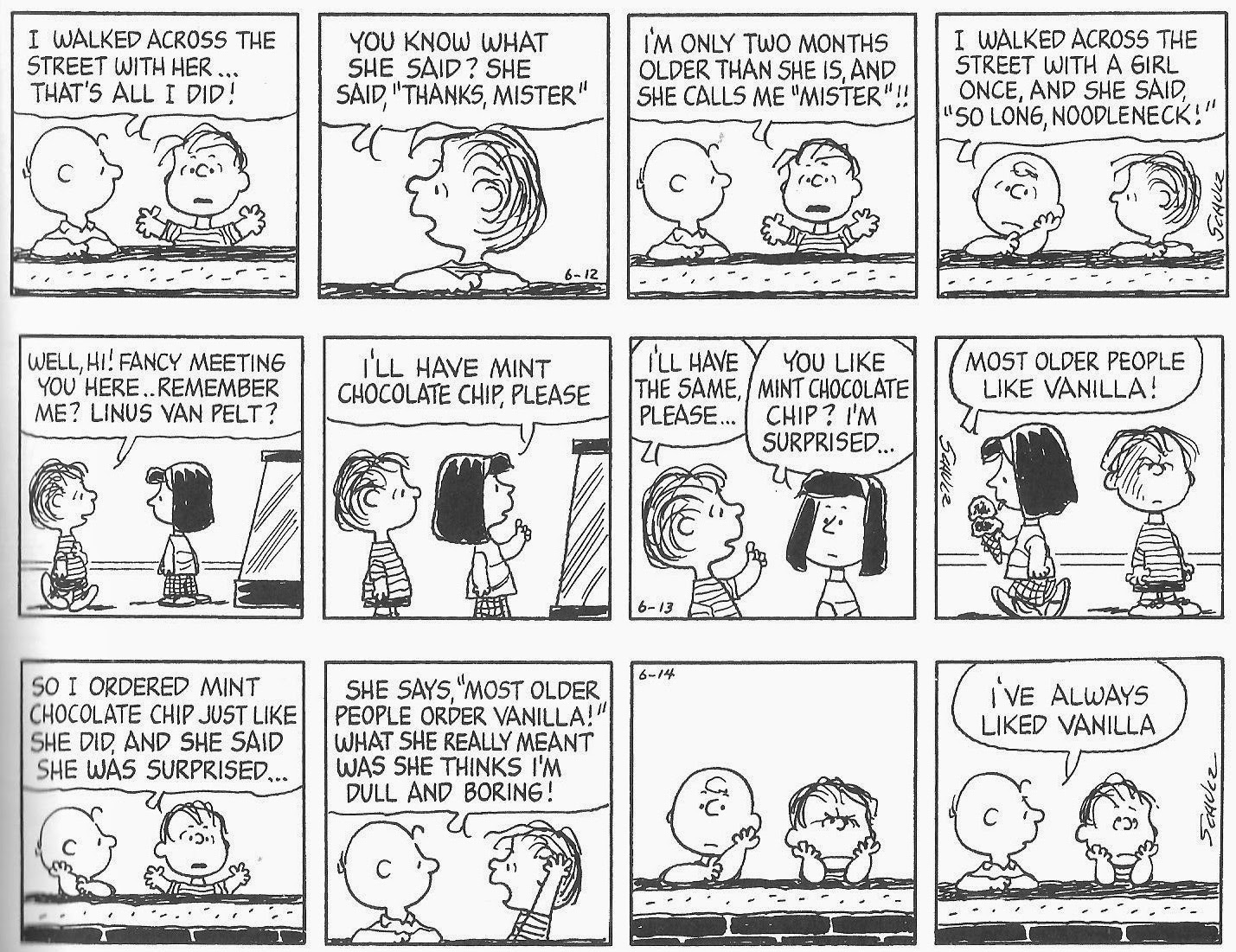 While Charlie Brown was the protagonist of Peanuts in the States (leading to a plethora of autobiographical self-conscious self-doubting self-hating nerds questioning their lifestyle choices along the likes of Robert Crumb and Woody Allen), other international countries focused on other memorable characters.  In France, the Peanuts title is merchandising bonanza, Snoopy, while in Japan, the main character is thought to be the intellectual and thoughtful Linus. 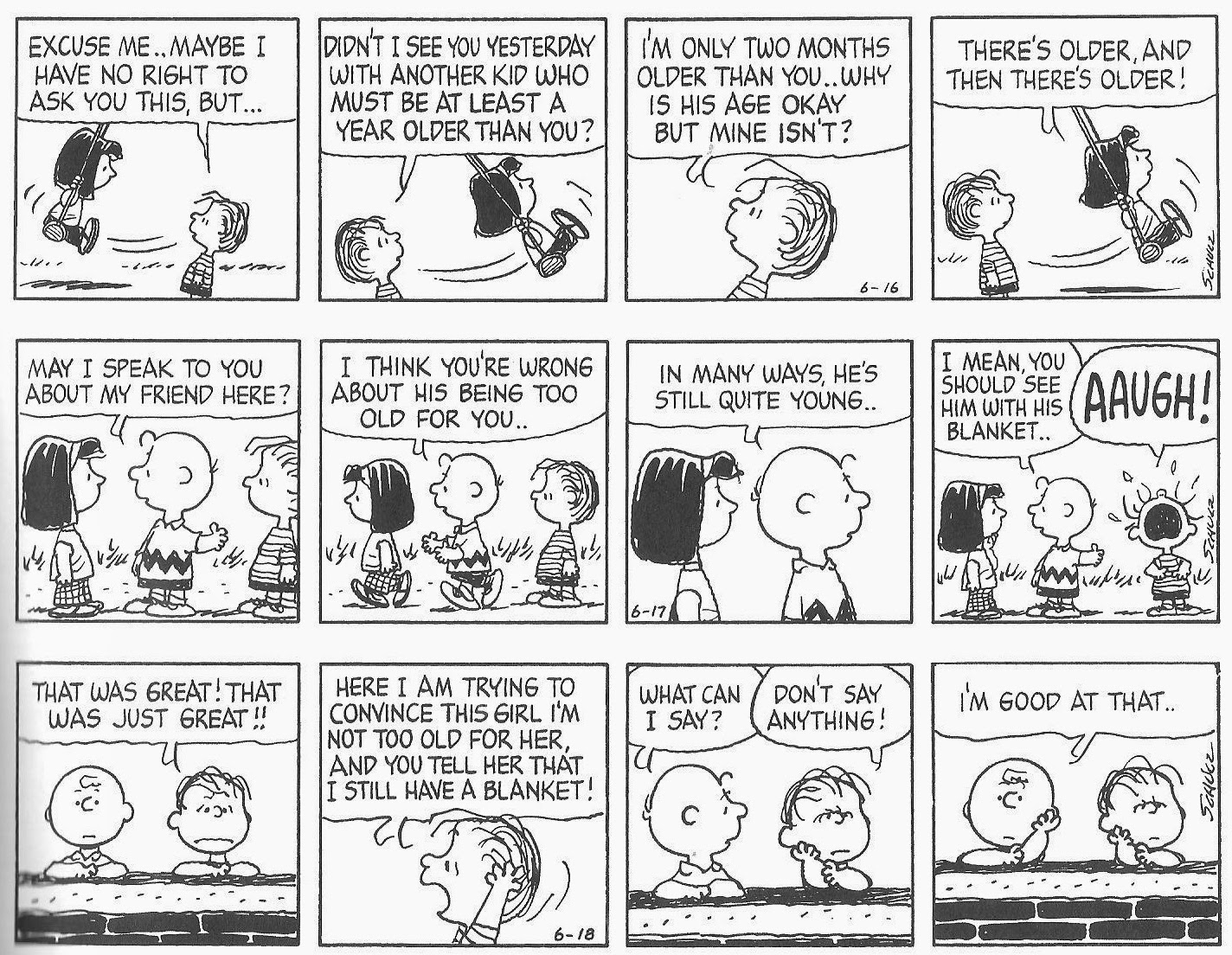 When not being pestered by Sally Brown or pining for the much older Miss Othmar, he has had various love interests as far as childlike infatuation allows.  He's engaged with girls such as Truffles the farmgirl, Eudora of the knitted hat, or Janice from the animated special on Lukemia, Why, Charlie Brown, Why?  But to me, his most interesting relationship was one relationship that occurred at the tail end of the strip's life when Charles Schultz was devoted to the daily drudge of his life's work, Lydia. 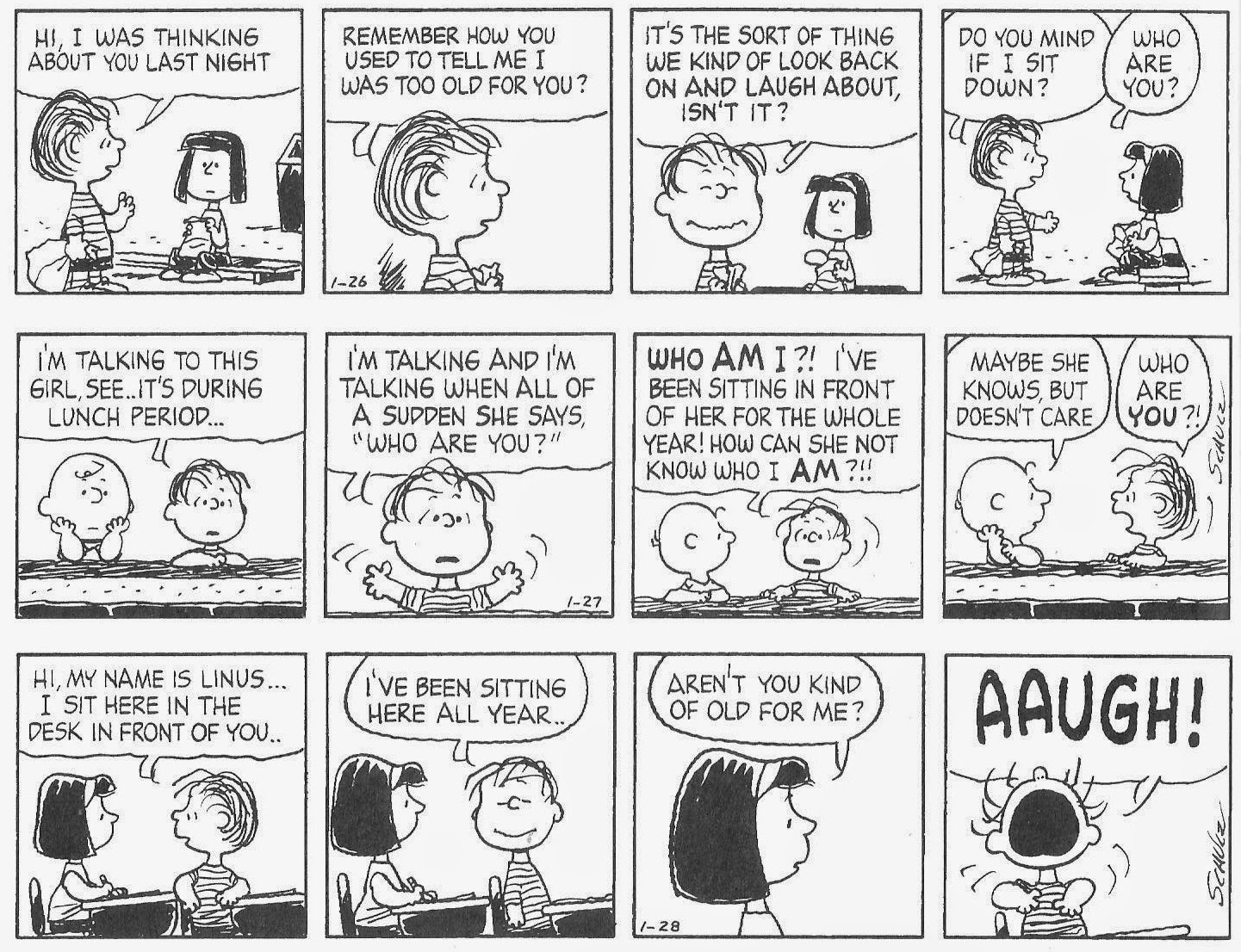 This mysterious girl only showed up in a few dozen strips, and her existence seemed to be nothing less than to completely perplex and frustrate the philosophical boy.  Lucy may attempt to allure others with her strength, but it's more through threat of intimidation than outright seduction.  Considering her traits, Lydia's the closest Peanuts has to a Femme Fatale.  Either knowingly or unknowingly playing hard to get and manages to be attractive without even trying. 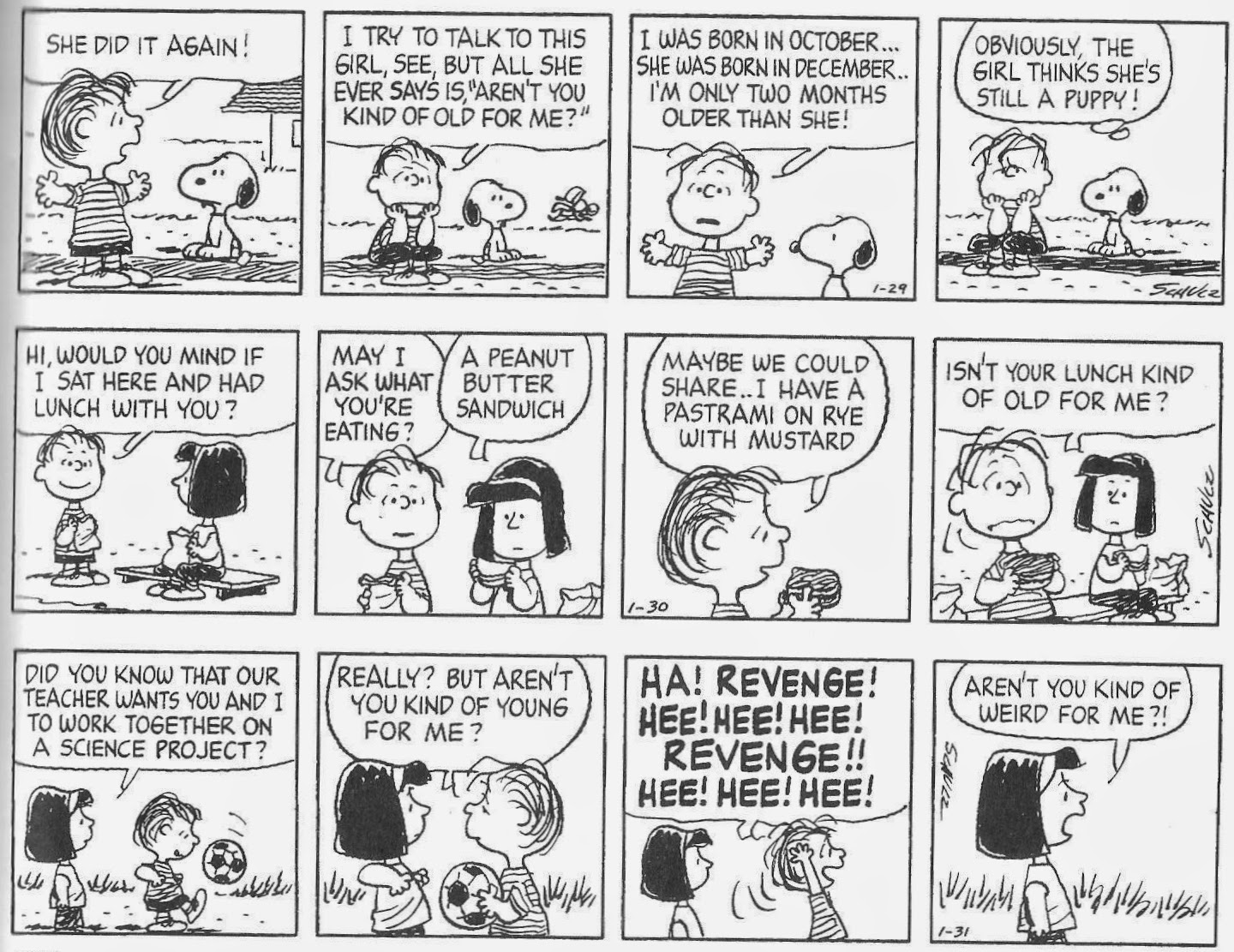 For all her amusing potential, Lydia's main appearance was regulated to the dailies, and would be considered a complete unknown unless faithful readers bothered to pick up more recent Peanuts collections whose widescreen format were less attractive than the concise Peanuts Parade paperbacks.  Sadly, she only appeared in one single Sunday comic.

What makes Lydia so interesting is how non-nonconformist she is compared to everyone else.  Compared to the regular Peanuts cast who spouted safe platitudes, Lydia seemed committed to saying complete non-sequiturs to perfectly innocuous questions that only deepened the mystique. 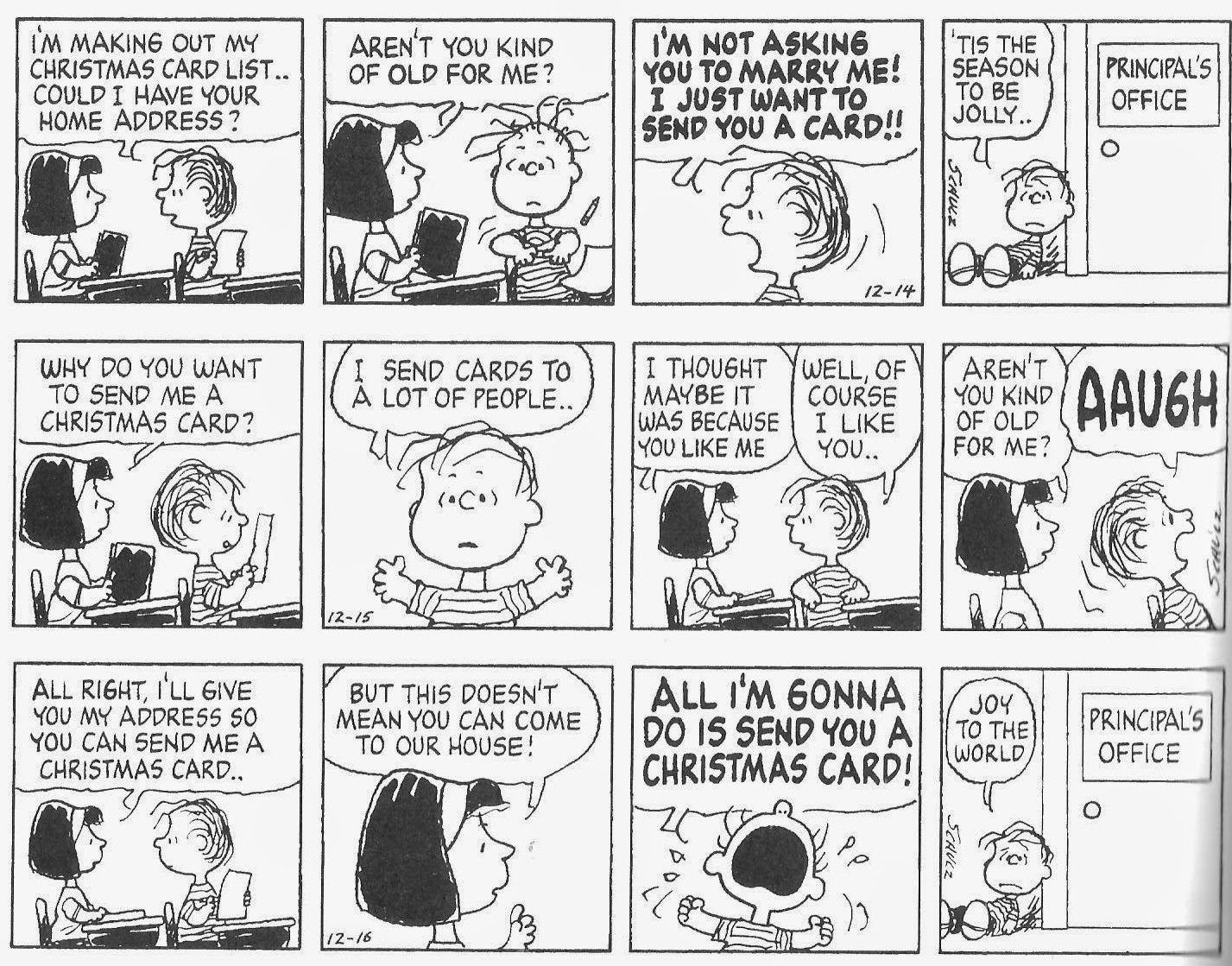 Amazingly enough, while introduced in June 1986 and again in January 1987, she didn't give her "name" until May of that same year.  That's almost a year before Linus got a hint of what her name is, and it may not even be her true name, considering how often she changes it on a daily basis like socks.  One suspects that this school doesn't take name attendance, otherwise her identity wouldn't be an issue. 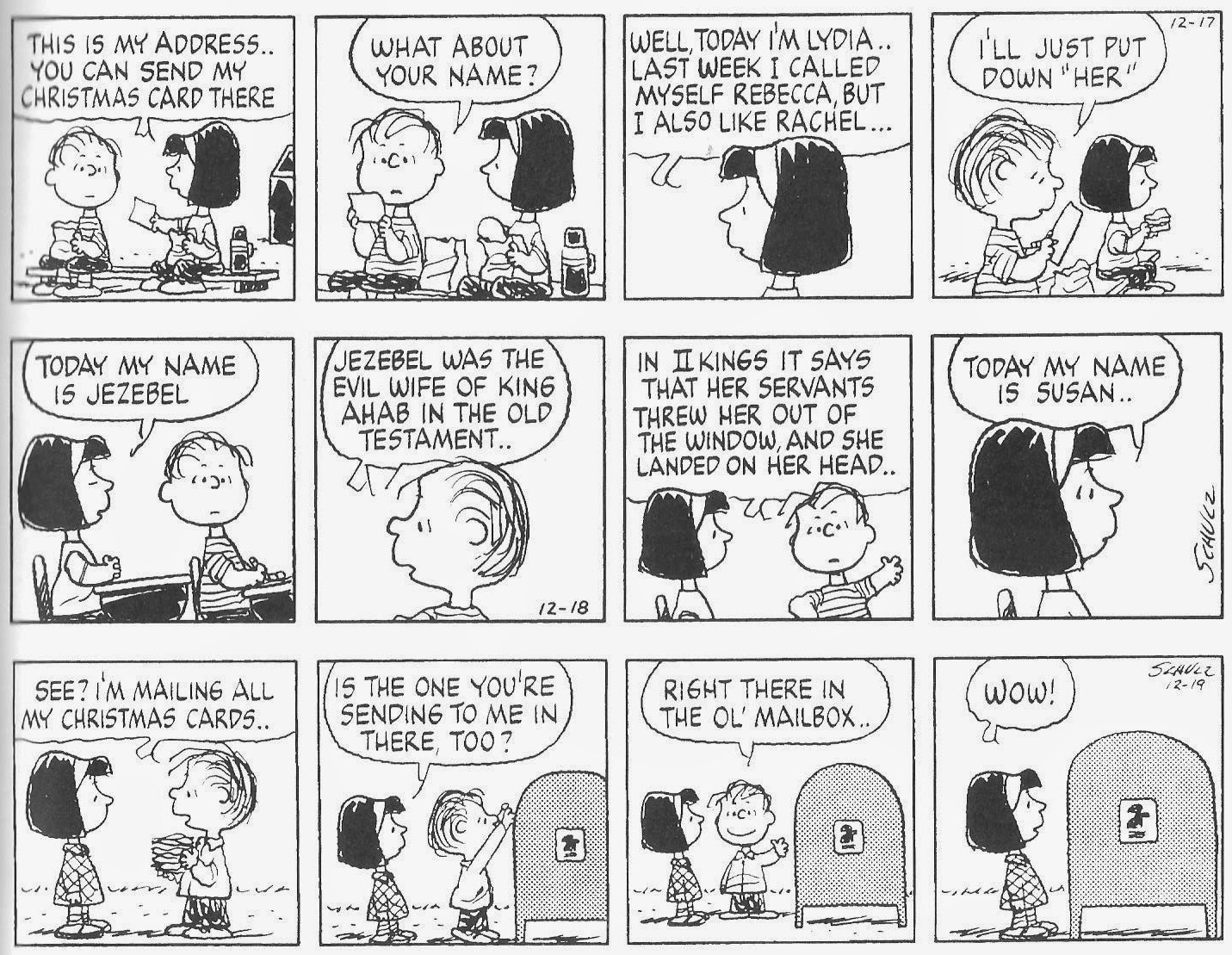 Despite her aloofness, I like how Lydia seems completely surprised by the simplicity of everyday life with something as mundane as mailing letters. 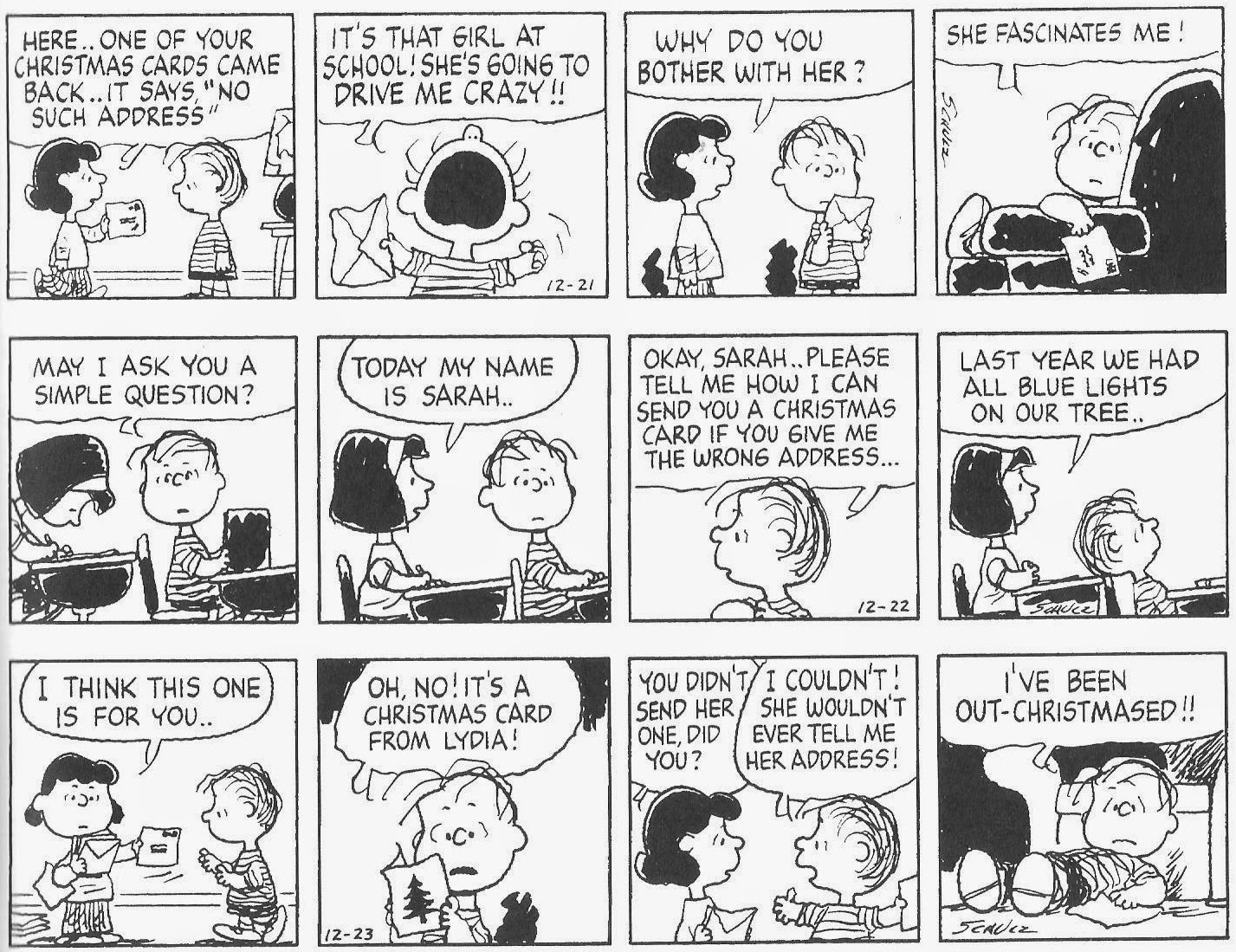 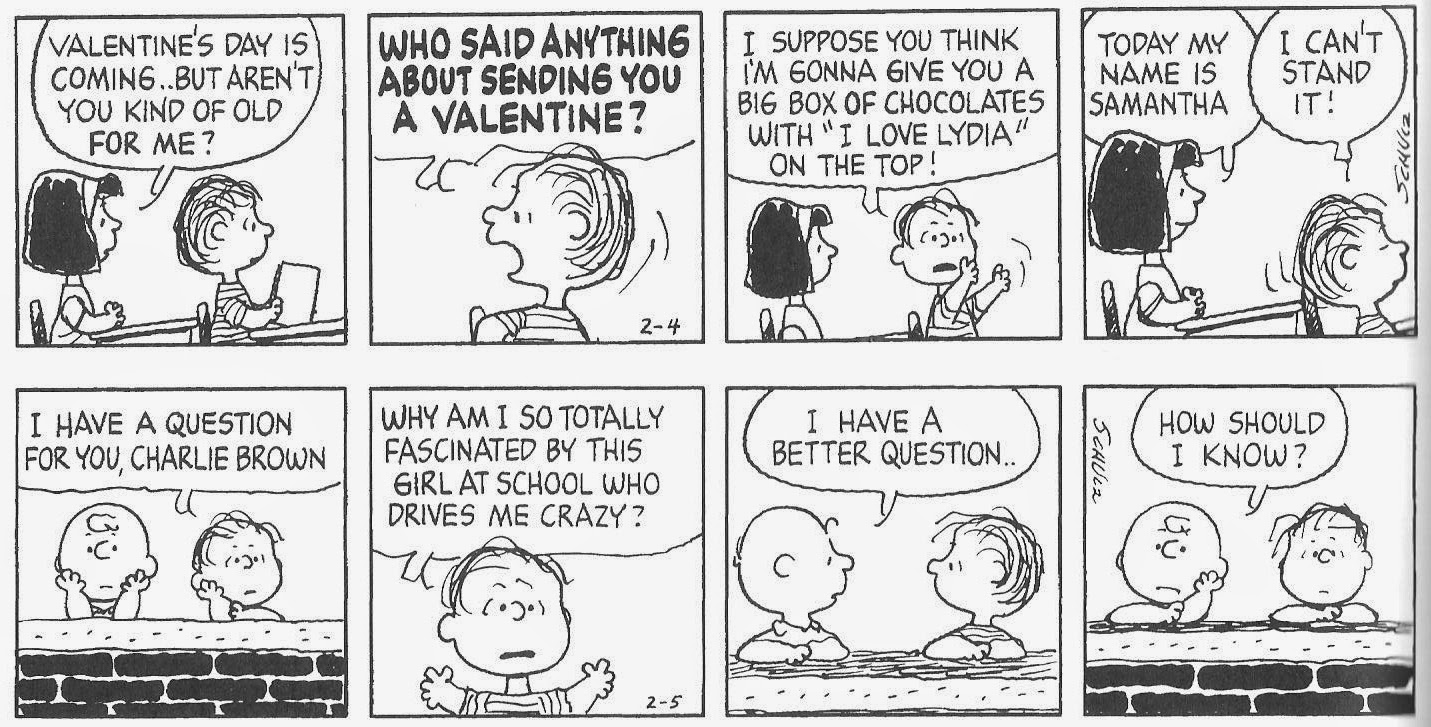 It's probably the fact that she only interacted with Linus that limited her potential for talking with the rest of the Peanuts cast, which is something of a shame.  It would've been something if Sally got jealous and tried to intervene, being unable to either scare her off or drive her away. 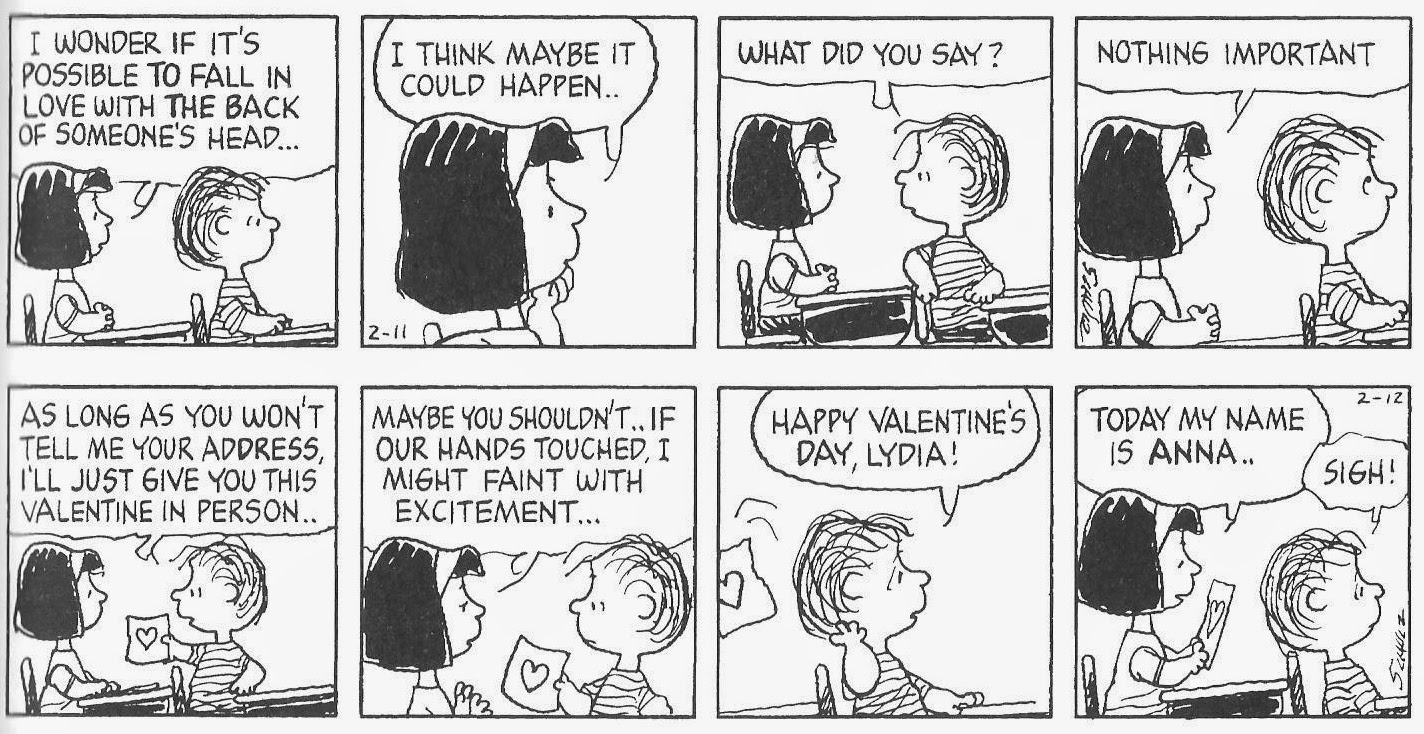 Linus: Here's a Valentine's Day card.
Lydia: Aren't you kind of old for me?
Linus: Could you stop saying that?!  I don't want to marry you!
Sally:  That's right!  Keep away from my Sweet Babboo!
Linus: I'm not your Sweet Babboo!
Lydia: You aren't?  Then what are you?
Linus: I'm not an anything!  Though I'm feeling like a wild-eyed fanatic lately.
Sally:  Well, he's not yours, so hands off!
Lydia: When were you born?
Sally: Huh?  In August...
Lydia: Isn't he too old for you?
Sally: What??  Where did that come from?
Lydia: When you're Ninety-Seven years old, he'll be Ninety-nine.  Are you comfortable with that?
Sally:  I just want to share my lunch with him.
Lydia: There's nothing wrong with that.  Just don't rush into anything.
Linus: Look here, Lydia...
Lydia: Today, my name is Sally.
Sally: You can't be Sally - I'M Sally!
Lydia: There's more than one Sally in the world, you know.  (Opens newspaper)  See?  There's a Sally Forth. 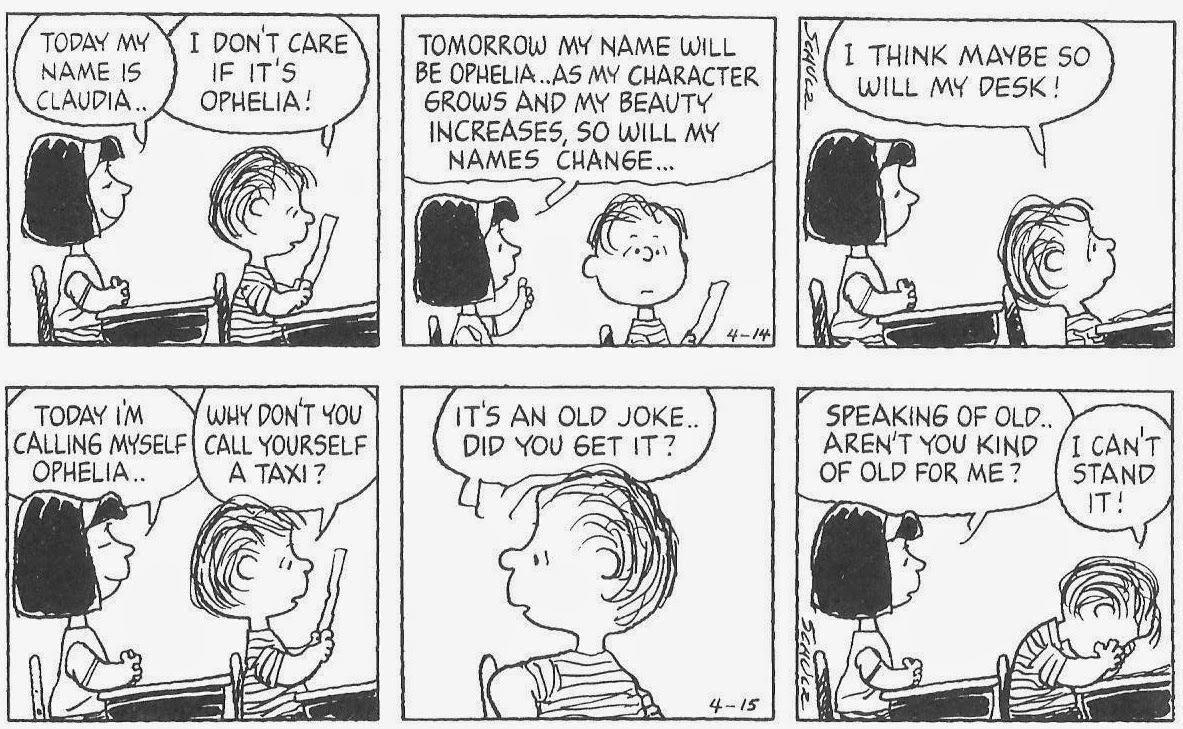 The potential comedic implications were limited, but endlessly creative.  Other characters have relied on less than memorable stock punch lines.  It's possible Schultz had trouble trying to work scripts around this infuriating girl, or wasn't around the influence of whatever made this outstanding limited dry run possible. 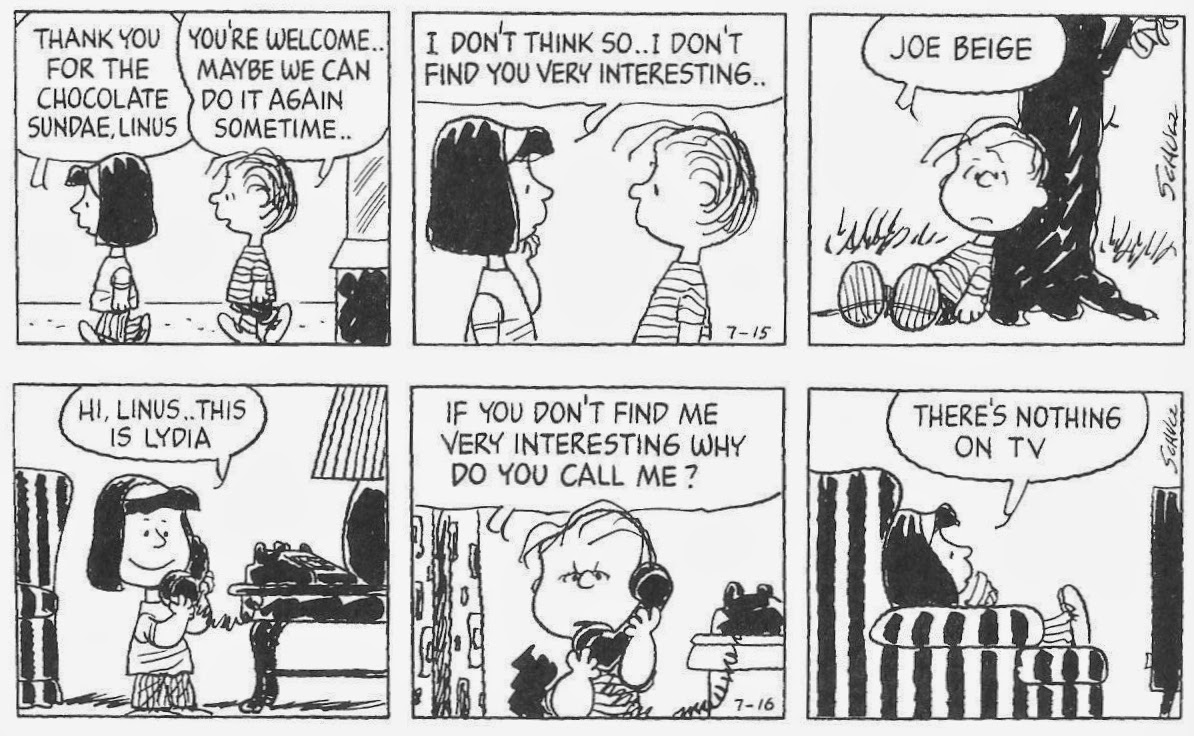 Ending on one last tangent, I always felt that Lydia was the influential model for Laura from Kyle Baker's Why I Hate Saturn.