Years ago, there was some online links doing some research on just how much money was stuffed within the three cubic acres that is Scrooge McDuck's Money Bin.  While the general consensus is that the amount of nickels and dimes is somewhere within the realm of Multiplujillion, Impossibidillion and Fantasticatrillions of dollars and possible more funny-sounding made up numbers.  When these articles came out, I was reminded of a letter I read that tried to determine the exact nature of the legendary dimensions of the world's largest visible vault. 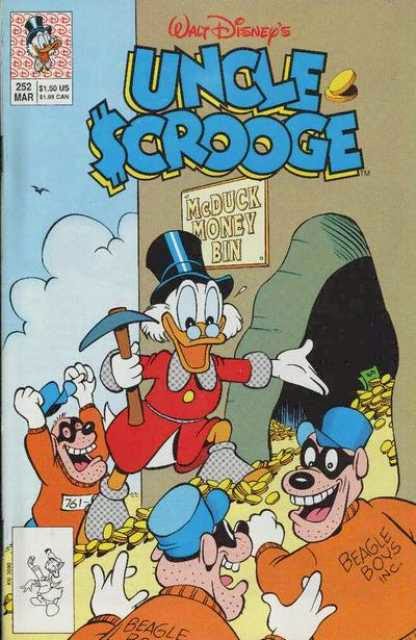 However, since I traded that particular issue for some obscure single-issue Mangas, I had trouble finding it again.  All I had to go on were my scant memories of the select few comics that I'd had in my possession that were picked up during my few visits to the airport, which were the only place where Gladstone Comics were available.  It was only recently that I recalled that the issue in question was #252, written by John Lustig and drawn by William Van Horn, was about a micromanaging robot, Perfecto 4000, took over Scrooge's business, under the belief that he was better suitable for managing it, since he was perfect.  While it sounds similar to the Armstrong episode of the DuckTales cartoon, there were slight differences, such as the Perfecto 4000 Robot only keeping residence within Scrooge's Money Bin, and all attempts to cast the mechanical being out via the army is easily repelled, not unlike the other overzealous Guardian Robot that was eventually taken out by Gizmoduck.  In the end, Scrooge has to rely on other expert safecrackers, the Beagle Boys to break into his own vault.

It was only recently that I finally recalled the cover I was looking for, since it wasn't available on the coverbrowser site, and managed to be in a place where I could write down my reminder, since past recollections led me to go on the spurious fallacy that I'd certainly remember it later.  After finally finding the relevant issue in question, I went to the last page and found the page-length letter devoted to the issue of Scrooge's bin size. 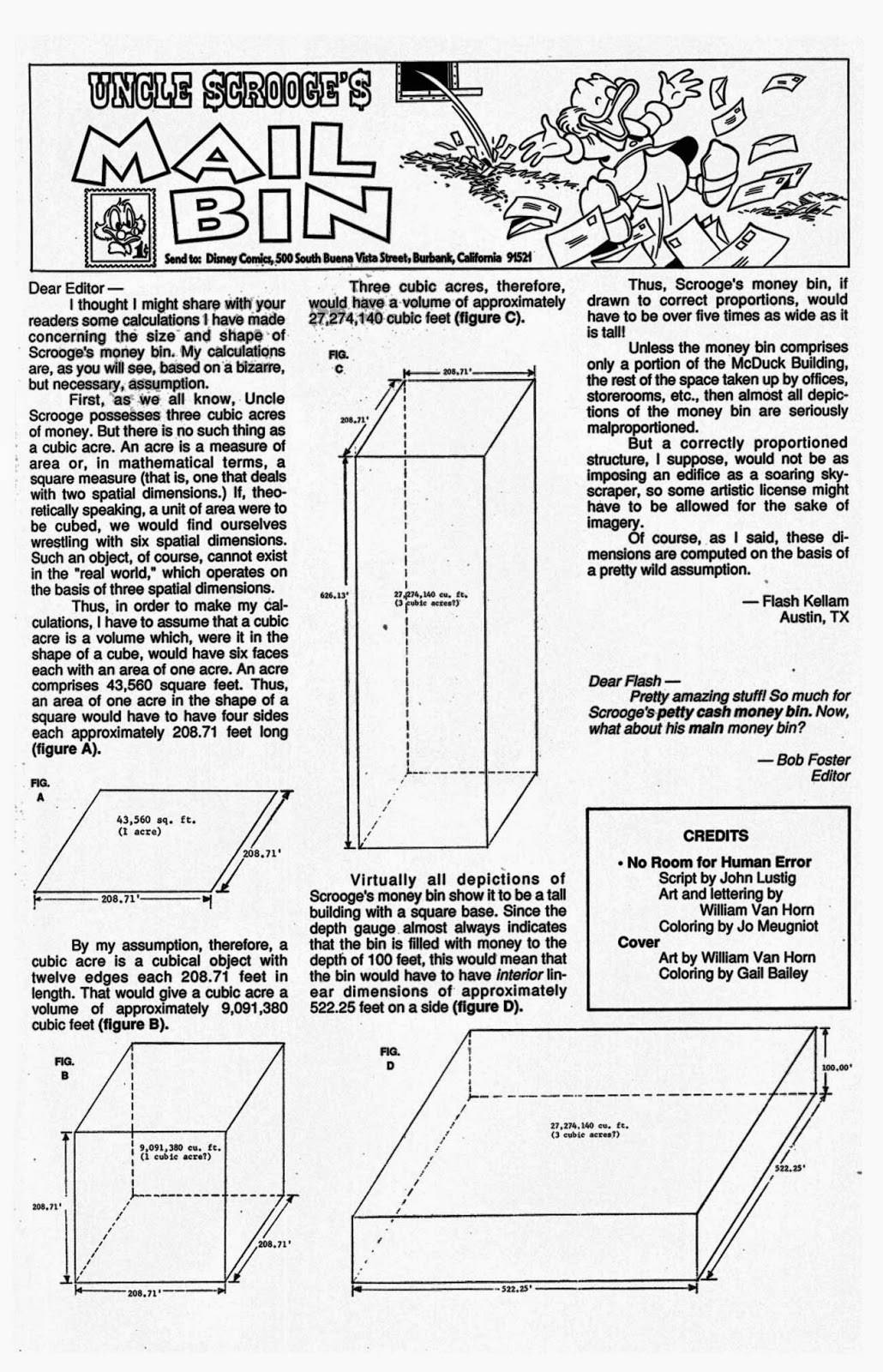 For ease of access, I've divided the letter into separate sections:

Right away, we can see that there's reasonable analysis of the meaning of the term 3 cubic acres, which's been bandied around so much that its lost all meaning.  When taken a closer look in the context of the dimensions, a singular acre is a piece of land, so putting it in three dimensions would yield the results below: 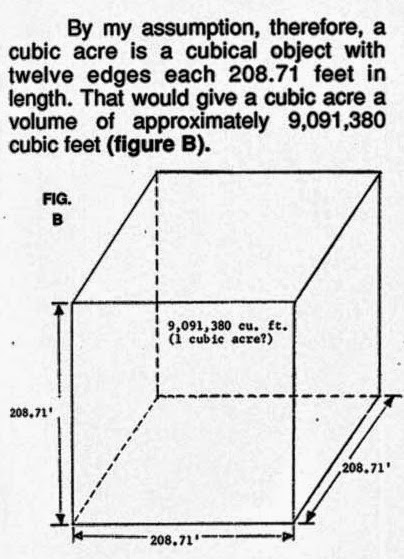 This is the nominal size of the familiar money bin we all know and love.  However, this would be equivalent to one cubic acre, not three.

This model of three cubic acres is basically three cubes stacked on top of each other, which is nowhere close to the square figure.  Now obviously, having such a structure holding valuable currency within its coffers would be subject to dangers of building health codes and windchill factors.  Rather than force the overarching structure into the Earth, the more logical choice would be to diverse and spread this mass into wider dimensions across.  However, Flash Kellan takes a more pragmatic interpretation of this, and winds up reducing the dimensions to a less than impressive degree. 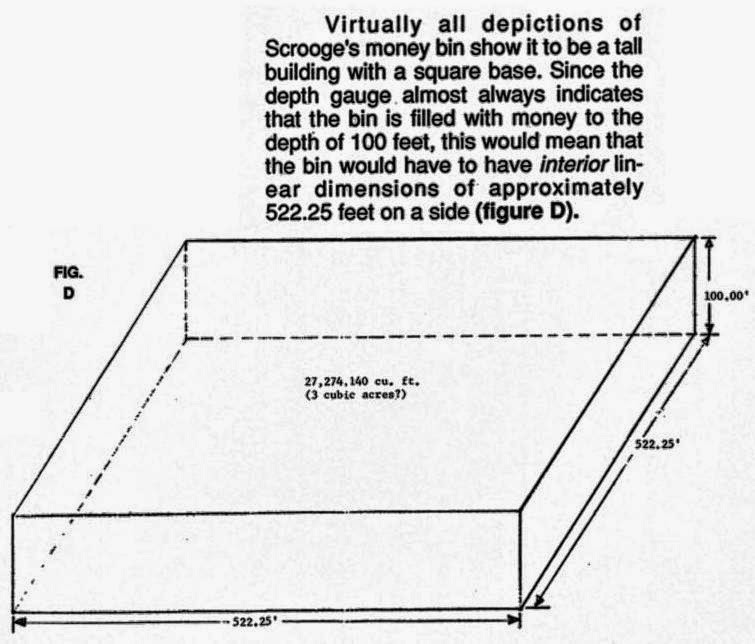 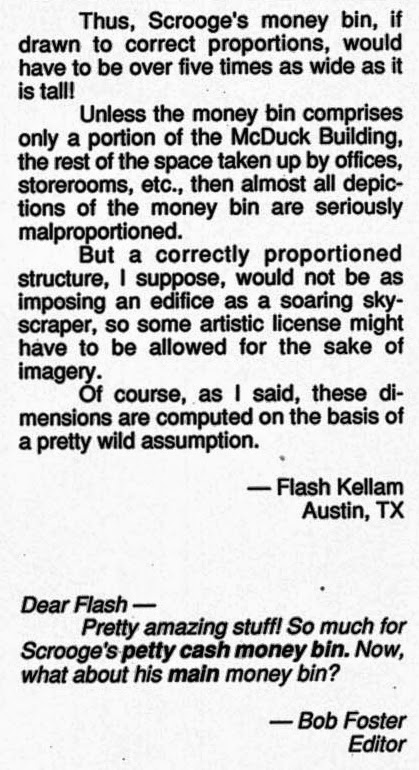 While looking up information to check if any of this was available online, I found out that there were several follow-up comments to Flash Kellam's letter.  I've reproduced their contents below, and corrected them for spelling.  Included are the editorial responses, which were left out.

Mr. Kellam's letter in Uncle Scrooge #252 calls to our attention an important mystery concerning the size of Uncle Scrooge's money bin: More remarkable still, however, is the fact that Mr. Kellam's letter solves a second mystery that has been troubling me for several months, while, contrarywise, the second mystery appears to solve the first. Let me explain.  You see, a few months ago, when I received an Uncle Scrooge comic book in the mail, I happened to notice there was something extra enclosed within the comic book: It was a brittle, yellowed envelope which appeared to be very old. Thinking that someone at the publishing house had accidentally dropped an advertisement in with my subscription, I was about to throw it away when I noticed the letters S. McD. scribbled in pencil in one corner.  Then, as you may imagine, my curiosity was greatly aroused. I hastened to open the envelope. Inside was a single sheet of paper containing the sketch of a cube. On examining the sketch more closely, I noticed that the six sides of the cube had been carefully shaded in with cross-hatches. Beneath the sketch, the following inscription appeared:

I pondered over the sketch for many hours, but to no avail; I could not fathom its meaning. So matters continued until I read Mr. Kellam's letter today. Then, suddenly, the meaning of the old sketch became perfectly clear: Mr. Kellam assumes that a cubic acre means the volume of a standard cube, each side of which is one acre in area. As he competently shows, this assumption appears to be inconsistent with the commonly assumed shape of the money bin. However, suppose that the entire surface of the standard cube is intended to equal one acre. Then, since an acre equals 43,560 square feet, each of the six faces of the standard cube must have an area of only 7,260 square feet. This seems to be exactly what the mysterious sketch was saying! Going on from here, we find that each of the twelve edges of the standard cube must be approximately 85.2 feet long.  Consequently, a cubic acre turns out to be about 618,593 cubic feet. Since Scrooge's wealth occupies three cubic acres, this means that he has about 1,855,779 cubic feet of cash. Assuming, then, that his money has reached the 100 foot mark on the depth gauge, we find that the square base of his money bin is roughly 136 feet in width and length. This corresponds perfectly with the usual cubical picture of the money bin, for it allows the bin to rise 36 feet above the money level, which is roughly the amount of empty space that one usually sees in drawings of the bin's interior. I hope this clarifies things. Of course Scrooge, with the vast mathematical abilities he has gained from constantly counting his wealth, knew it all along. Now, can anybody explain how Scrooge's notes happened to get mailed to me? 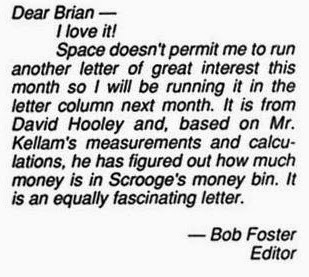 As a follow-up to Flash Kellam's investigation into the projected size of Scrooge's money bin, I have taken things a step further in order to estimate the minimum net worth of his fortune. Mr. Kellam arrived at a figure of 27,274,140 cubic feet for the size of the money bin. Let us assume that Scrooge collected silver and gold coins in equal amounts; this would imply that approximately 13,637,070 cubic feet of the bin is occupied by each of the precious metals.  Now, silver has a density of 10.5 grams per cubic centimeter; gold has a density of 19.3 grams per cubic centimeter. Since precious metals are usually measured in troy ounces, we multiply by 0.0321507 ounces per gram and 28,316.846 cubic centimeters per cubic foot to give densities of 9559.267 ounces per cubic foot for silver and 17,570,843 ounces per cubic foot for gold. Multiplying these densities times the volumes above gives us 130,360,390,000 ounces of silver and 239,614,810,000 ounces of gold, in the money bin.

At the time of this letter, silver was selling for approximately $4.00 an ounce; gold was worth $400.00 an ounce. Scrooge's silver is thus worth $521,441,560,000, and his gold would amount to something like $95,845,924,000,000.00. So we conclude that in today's market his coins alone are valued at over 96 trillion dollars. At the bottom of the bin, of course, crushed under the immense weight of the metal above, lie the fabulous greenbacks which make up the remainder of his umpticatillion, fantasticatillion fortune. 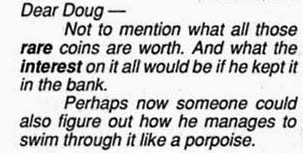 In Uncle Scrooge #256, you printed a letter about the size of Scrooge's money bin. It gave a size of 136 feet square, 100 feet deep arid 36 feet empty at the top. l'm afraid the calculations are somewhat off. Scrooge is supposed to have 3 cubic acres of cash, and while acre is a measure of area and not cubage in the usual sense, it is used in measuring volume. In irrigation, water is measured by the acre-foot. One acre of area a foot deep, 43,560 cubic feet is one acre-foot. So, l'd consider a cubic acre as the square root of 43,560 = 208.71 feet on aside by the same in depth, that works out to 9,091,408 cubic feet per cubic acre. Then multiply by 3 and you get 27,274,224 cubic feet. Extract the cube root of this and you get just a scratch over 301 feet.

Strictly speaking, unless Uncle Scrooge's world has six spatial dimensions, the term "cubic acres" is meaningless. An acre is a measure of area, equivalent to 43,560 square feet. A cubic acre would therefore measure approximately 82,653,950.010.000 square feet. Scrooge's money should be measured in terms of volume - something that can expressed in terms of cubic feet.

Now, let's see if Randal Munroe of Xkcd fame can give his interpretation of this.
Posted by DeBT at 9:23 PM