The movie 12 Monkeys was a visual and intellectual tour de force that led some film reviewers to categorize it as humour, when there was very little to laugh about, Brad Pitt's scenery overacting otherwise.  When Hollywood comes across something they can't properly pigeonhole or classify, they add "humour" to its description as a way to attract audiences that would otherwise be scared off.  Despite their unsure marketing, 12 Monkeys became something of a sleeper hit.  Because it was somewhat successful, 20 years later, they decided to make a TV show out of the premise, even though it was a one-off movie never intended to be a series.  MightyGodKing went into further detail over how producers are looking for well-proven franchises, rather than daring to explore new ground.

I was somewhat cautious but wary, since they were dealing with a concept that could either be an emotional trainwreck, or tolerably watchable.  I'm generally a good judge of deciding whether a show is to my taste or not within the first five minutes. Unless it's been extensively parodied by MAD, I'm not going to show much interest otherwise.  Let others burn their precious brain cells on perfectly harmless shows. 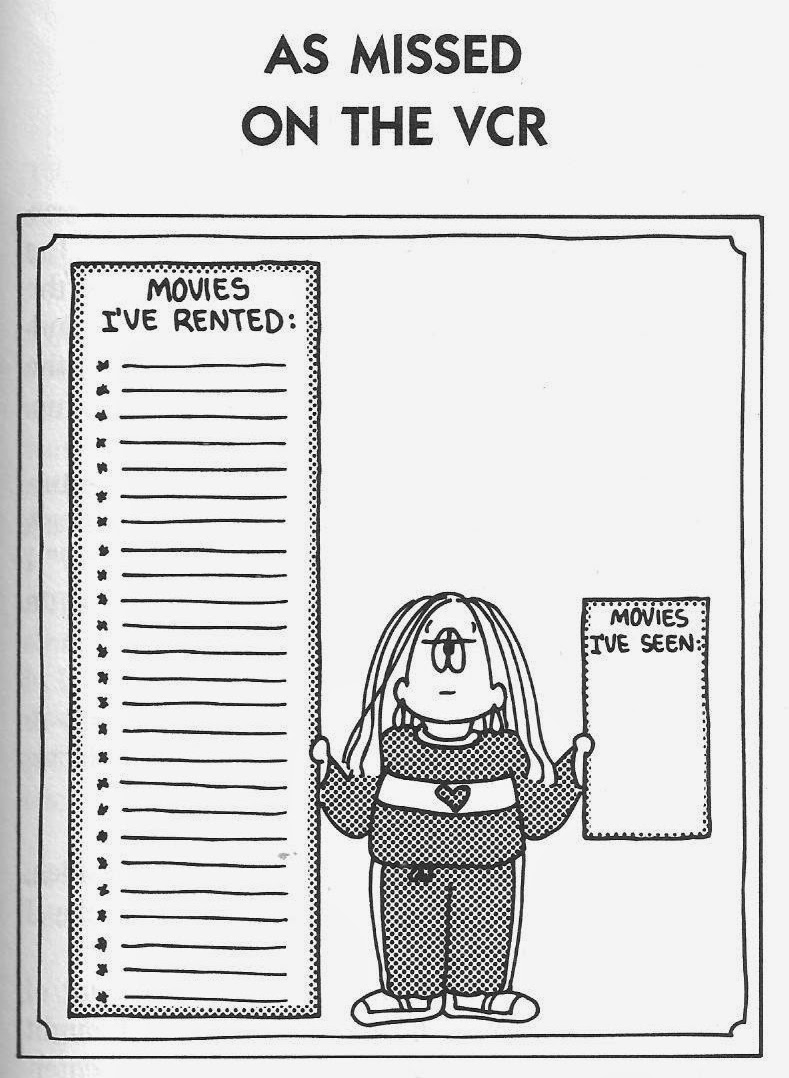 Having had the courage to check out the pilot, I knew we weren't off to a good start 15 seconds in, when we're given expository narrative, telling us exactly what we need to know.  As if the audience wouldn't be able to figure things out themselves, because God Forbid they should have different ideas about interpreting exactly what's in front of them.  It's not like they wouldn't appreciate having narrative curves thrown at them from a Terry Gilliam premise.

I basically stopped watching after Cole demonstrated that he came from the future by scratching the Doctor's watch. The whole point of 12 Monkeys was that their version of Time Travel was different from others such as Terminator and Back to the Future.  In those, history wasn't clearly linear, was capable of fluidity, and with small but significant changes to the timeline, certain events could be influenced to cause things to change for the better or for the worse.  12 Monkeys took the concept of Time Travel, and determined that if it was used at any point in history, history would have already be based around that fact, rather than rewriting itself.  But I suppose that would be considered too uncomfortable (and plot-intensive) for an audience more accustomed to having a choice.  If any of us were able to fully comprehend the consequences of our actions from something as innocuous as tossing an apple core, we'd never be able to function in our lives.

Also, changing James Cole from a confused mental patient with no control over his life to a hardboiled detective misses out on the pathos and makes him just another tough schmoe no different from dozens of tough guys on other shows and channels. There's none of the pure joy of experiencing the simple things we take for granted. The earlier carjacking is made more poignant by Cole's reaction to hearing music on the radio. "What a Wonderful World..."

Removing the rigidity of the time-travel device also ensures that there's little need for rewatching the series as a whole, since in the movie, there were dozens of insignificant scenes that which didn't contribute to the mission, that made for a richer experience.  Chances are, you'll be watching a much different movie the second time around, knowing what's going to happen at the end, and notice certain details that were lost the first time around.  Nowhere is this more evident than when Cole is watching the Hitchcock movie Vertigo, and remarks that he "Doesn't remember this scene.  That the movie is different every time you see it, because you're a different person."  To purists out there, I'm obviously paraphrasing, so take the above with a grain of salt.  Memory is an unreliable asset at best, and can be subject to scrutiny even in the best of situations.

Ironically enough, in a show about time travel, there's simply no time to allow the characters to breathe, and simply TALK to each other. In fact, the only thing that audiences found implausible about the movie was how quickly the Doctor became interested in James Cole after some brief encounters. Even allowing for Stockholm Syndrome doesn't move that fast.

The need to get the Sci-fi setup up in a hurry is probably its biggest fault. Similar to the American adaption of Prime Suspect, which wanted to show how tough Jane Timoney was by having her wave a gun in front of a taxicab driver, rather than Jane Tennison using cutthroat interrogation techniques by catching the suspect in conflicting lies. The better show for using a female cop combating male chauvinism and slipshod police work was The Closer, which had smart (and funny!) writing, believable interaction scenarios, and a constantly changing status quo, even as the characters remained consistent.  It also helped that the cast were a likable bunch, despite (or because of) their glaring faults, especially Flynn and Provenza.

That distinction between likable and unlikable cast members goes a long way in determining whether audiences will identify with whoever's on the screen.  Lately, Warner Brothers has been having trouble with pretty much every S-hero under the DC comics line, trying to shoehorn Batman's grimdark schtick onto other heroes who don't fit the profile, leading to a morally ambiguous Superman, because they believed that audiences don't want a beloved inspirational figure.  Constantly relying on a singular archetype figure not only limits the potential male protagonist, but also the alternate means of solving problems that don't ultimately resort to punching people in the face.

I was initially worried when I first heard about the American version of Sherlock, fearing that they would take the Dr. Gregory House route, where the intellectual genius' ability to find solution to unorthodox problems gives them the impetus to behave nasty to everybody around them.  An Ur example would be Cal Lightman from Lie to Me, about detecting the facial and body language cues of people to determine what they were being truthful about or not.  The first season was quite good, but by the second, Cal Lightman was being verbally abusive towards everyone to the point of contracting Tourettes.  While this method of snarking gives a kind of venting relief, in real life, this creates long-term strife with the people you're supposed to work with.  Even if your results gains traction, your employees will remember the uncomfortable implications of being around you, and prefer seeking employment elsewhere.

The likely culprit for this level of nastiness was the widespread diagnoses of Autism, and Asperger's Syndrome.  Exploring this mind-blind personality caught on, especially in Hollywood, since it gave an excuse for showing people with sociopathological symptoms to act however they want without worrying about the consequences.  But there's something people tend to overlook or forget about people with Asperger's - they have all the traits that would typically make them Sociopaths, except they don't ACT upon those traits. It's that thin line between a Villain and an Anti-Villain that makes them more compelling figures. Also, true Psychopaths are much more competent at manipulating the emotions of people around them, and have no fear about potential consequences of their actions.

Where remakes of popular movies tend to fail is by their lavish devotion to the original, which would alienate long-time fans, and possibly be less than inspiring than the source material.  It's recently been pointed out that these remakes could be vastly improved in one of two ways - either rip off the premise entirely, re-inventing it with your own rules, or be as different as possible with its own internal logic.  The BeetleJuice movie was an entirely different beast from the BeetleJuice cartoon, and the latter was all the better for it.  Where 12 Monkeys (and other shows) fail is in not taking their absurd premise far enough. 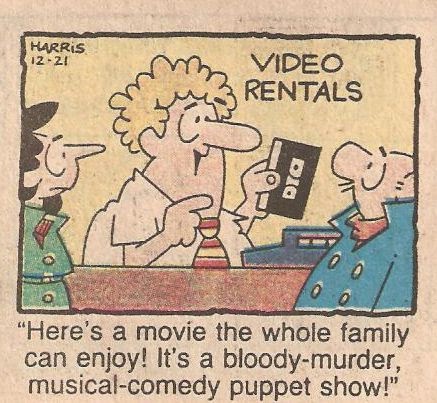 I've written about disturbing VHS covers in an earlier post, but this link goes into further detail of just how influential and inspiring these covers were to youngsters exploring the video store, and finding these lurid features in front of their innocent eyes.  Such imagery would be equivalent to those Tales from the Crypt comics that led to a crackdown of comics in the 1950s, but since movies were a more respected medium (despite parents complaints of how lousy they were), numerous people watched them regardless.  Never having the courage to watch one myself, I always thought Horror movies ended horribly, leaving only the lingering effects of what just happened.  A creative writing teacher could have their students use any one of the dozens of disturbing cover art and have them write a concise summary of what the story would be about. Chances are their descriptions would be far more creative and disturbing than the actual movies themselves.  It's that level of innovation that we should strive for, budgetary constraints be damned.  (Though working under restrictions yields more results than having access to extra funds)
Posted by DeBT at 8:23 AM