Sorry for the lack of updates recently.  This is not how I wanted to spend my first two weeks of the New Year.

On the day of the New Year's party, I had something of a nervous breakdown before the guests even came.  While unloading the dishwasher, I accidentally dropped a single knife on the floor.  This single act allaying to the superstition that company's coming led to a series of sudden coughing and sneezing that had me sniffing like a meth addict.  Even though I'd gone through the trouble of preparing all week, I was overcome with a bout of cold condition that no amount of allergy medication could calm down.  This was further exacerbated by the hosts being reluctant to let me touch any appetizers on my own, and bring my favorite foodstuff to me.  Being catered to my every whim, but being unable to make my decisions myself just compounded to the stress.  It was only after lying down and everybody came and brought the food in that I allowed myself to leave the luxury of my room and join the party world.

If there's anything resembling an allergic reaction to social conditions, I haven't seen it in the DSM-IV.

Then, a few days after the clean-up and having composed myself, I was thinking of what my next post should be about, when we were hit by Version 2.0 of the infamous 1998 Ice Storm.  Fortunately, as will most second editions and sequels, this was a much weaker version compared to the first.  However, I was still struck with a sense of impending madness, since the blackout occurred just as the sun was beginning to set on the shortest days of the year, and I wasn't feeling tired yet.  In fact, I was in a state of heightened awareness, and in a state of survival mode.
I also wanted to explore the town, to get a general sense of just how bad everything was.  This desire for knowing the full extent of the power outage was borne from having no second-hand access to any information of my own.  I wasn't in contact with anybody who could tell me what was going on.  Anybody who could listen on the radio was asleep, and would remain so until the power came back on, or had a well-deserved nap.  Of the people who responded to my texts, only my sister replied, verifying that it affected the region she was living in.  While others could easily rely on word of mouth, I had no such option. With a lack of human contact, I'm in a state of constant craving for intellectual stimulation.  I was in a state of perpetual anxiety, and wanted to read some books I'd taken out of the library, but wasn't feeling up to reading them by candle or flashlight.  Even though he wrote his epic that way, I don't know how Leo Tolstoy could stand it.

By this time, the sun was already beginning to set, and I'd already abused my retinas trying to finish reading a book.  It was only 5:00 Sunday, and most places were just beginning to close, and I didn't want to waste the remaining hours of the weekend just sitting around.  I noticed a faint glow in the horizon, and was told that it was likely the mall and restaurants running on backup generators.  I decided to take a look for myself,and maybe bask in the relieving glow of electricity. 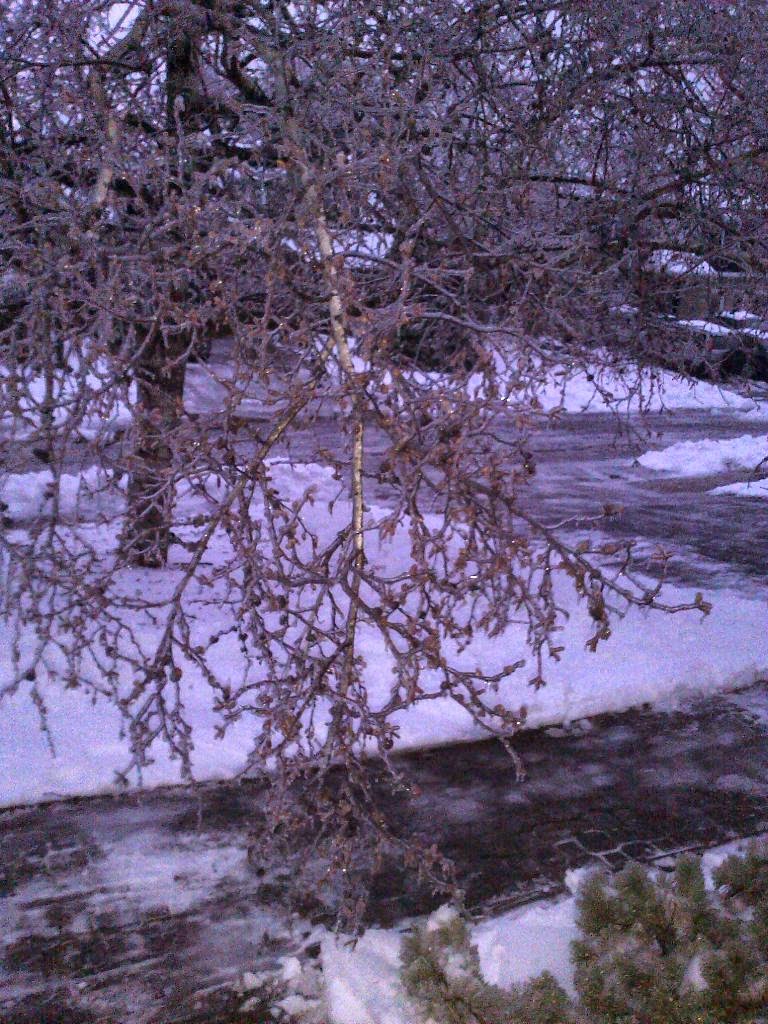 However, on my trek to the mall, I noticed a bus going the opposite direction, and decided to get in anyways.  Let me tell you that if you're caught in a blackout, and need some unnatural light to survive, the interior overhead light inside public transportation is a potential lifesaver.  I would've happily ridden around the bus with a handful of reading material, but chose to get off at a nearby mall where I could read to my heart's content.

That was, until I was kindly shooed off by someone who was locking the place up, and asked if I was waiting for anyone.  I replied honestly, saying I just wanted a place to read, and went back out to brave the elements.  While wandering the roadways looking for the next bus stop, I became aware of just how DARK it was without having helpful backup generators around.  Whole streets were littered with vast expanses of nothingness, save for what was illuminated by travelling headlights from passing cars.  After a brief foray in a wrong direction within the darker confines of town, I managed to hitch a ride back to my intended destination at the mall, where I took the opportunity to try a fast food restaurant that had suitable lighting while waiting for my next bus home.


It occurred to me that compared to my overreaction to the New Year's party, I was much more accepting of these conditions of this stressful situation than I should've been.  A possibility was that I'd already suffered the worst of what happened years ago, and this milder version simply wasn't as hard on the senses.  I have to be exposed to specific stressful situations before I can accept them.

The irony of it was, I'd just eaten an egg sandwich just before the power went out hours ago, yet I wasn't actually feeling that hungry.  I figured I might as well try the experience, since I'm usually averse to spending money whenever possible.   Most amazingly enough (at least to me), I wasn't feeling that hungry.  All I'd eaten that day before the power went off was an egg sandwich of my own making, which I'd made as a special occasion for New Year's, since my recipe was popular at potlucks, I figured the rest of the family should enjoy the experience.

This involves using 6-12 boiled eggs, cut using an egg slicer twice - vertically and horizontally.  Then in a bowl, I lay some mayonaise at the bottom for easier mixing.  The chopped eggs are added to the bowl, then mashed further with a fork, and added with a reasonable dose of Herbamare spice, which is a mixture of vegetables, herbs and sea salt.  Very tasty, but very potent.  After which, I add in some chopped up shalots or chives, depending on the season, and some extra mayo.  Don't use too much mayonaise, or you'll wind up smothering the batch in mush.  As an added incentive, due to some experimenting with rolled-up Naan, I found surprisingly enough that crab meat goes very well with eggs, and added some crab flakes to the mix as well.
After eating and reading to my fill, I decided to head back on home, even though it looked increasingly likely that this blackage would continue on for quite a while.  My hopes were briefly spurred on with the sound of sporadic "pop"s around outlets where I'd taken the opportunity to turn power switches to computers off so the sudden power surge wouldn't affect the hardware.  I was told that these "pop"s were attempts made to restore power, and that they were gradually getting closer to an answer.  In effect, it was the electric equivalent to the Chinese Water Torture, tempting us with hope spots one volt at a time.

Eventually, the ritual ended, and I could feel the welcome flow of electricity coursing throughout the abode. After this experience, I was confident that I would be able to fully accept more stressful conditions from now on.  That was, until I had another power failure the very next day.  In the afternoon.  Having power failures when there's nasty weather conditions is understandable, but is extremely annoying when weather conditions are nice.  I later found out that there were still power outages all over, and that Hydro Quebec was doing systematic checks to make sure everything was in working order.  The afterward explanation was helpful, but some prior warning would've been nice.  Just a few months ago, a decision was made to replace the oil heating system with electricity, and a man from Hydro Quebec came to do a quick exchange of the checking system, which resulted in a quick cuttage of power for two minutes.  Turns out this was something of a perfect storm - I was preoccupied with shoveling the backyard, and my Dad was in the bathroom, so neither of us were aware of his presence until he'd done his business.  It was only by the sheerest chance that I managed to catch the guy before he left, and verify exactly what happened.

By the time I had my third power failure, I was beginning to become annoyed.  This one more than the others, because this outtage only affected NINE houses on my street, while everybody else across the street had power.  I began to feel that the universe was conspiring against me again.  (To those people who're keeping close tabs on my life and devising clever ways to annoy me by adjusting the angle of stationary objects to reflect the sun into my eyes, I'm onto your little tricks)

On the plus side, while having some personal time in the bathroom, I noticed some flashlight activity by Hydro people who were inspecting the source, which turned out to be the generator in my back yard.  However, they couldn't reach it from my side, so they brought their truck around the block to get to the other side where they attempted to reattach the power line with an extra-long stick, knocking away a branch in the process.  Actually seeing the workers do their job from a distance helped make the waiting process that much more bearable.

Even so, the constant loss of power meant that I was having trouble keeping a consistent writing schedule, since my tabs and windows were constantly being closed without my permission, making me lose track of my trains of thoughts.  Now that I've finally posted this entry, future backdated posts should become more frequent.

An added bonus - while taking a look around town, I came across an unusual one-time bike lock. 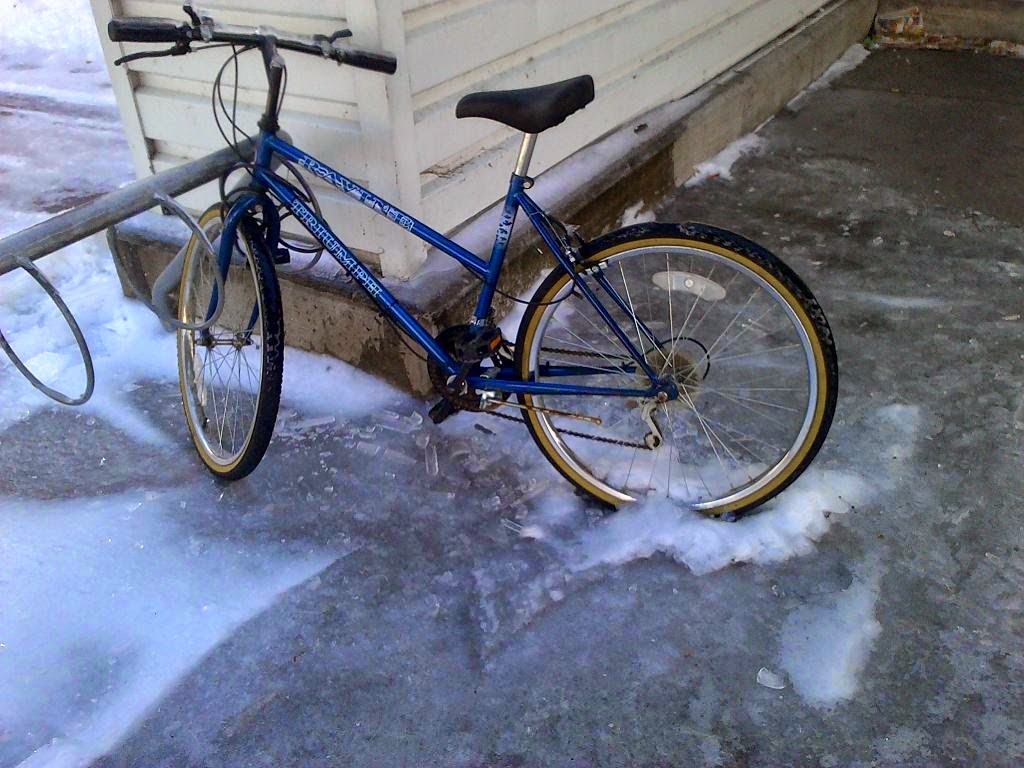