There was a comic that made strides on various comic boards about an emotionally stunted girl who has a deep dark secret.  When she looks at things that displeases her, they may find themselves becoming warped against their will.  Considering it's by Jason Yungbluth, the creator of Weapon Brown, a parodic tribute to Peanuts and the comics page, starring Charlie Brown as a Bruce Willis Action hero in a Mad Max world, Clarissa is a much more deeply unsettling work.

I recently thought about this comic while coming across another potentially compelling Manga that's just recently being scanlated, Sekai Oni.  Likewise, when the protagonist of Sekai Oni, Shinonome Azuma looks at objects in the mirror, things are reflected back in a warped manner.  This is a result of a symptom known as Alice Through the Looking Glass Syndrome.   (ATtLG Syndrome for short) 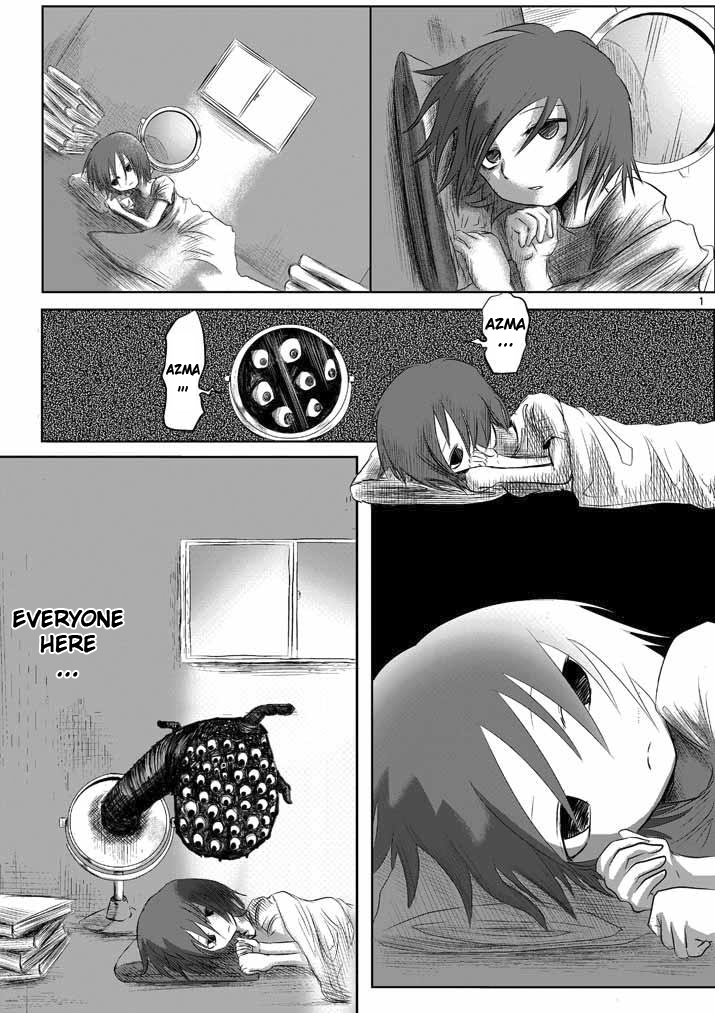 Despite this frightening ability reflective of a classic Twilight Zone episode, Clarissa doesn't seem particularly interested in inflicting this onto the outside world.  It seems to come and go against her will, such as in this instance where her stuffed animals come to life when no one's looking.

Faced with the reveal of an inanimate toy becoming the culmination of every childhood's dream, Clarissa is totally apathetic to this stunning revelation.

On the other side of the coin, Shinonome Azuma's best friend is a dead budgie that only lived for three days.  And that was only because she could talk to its mirror reflection. 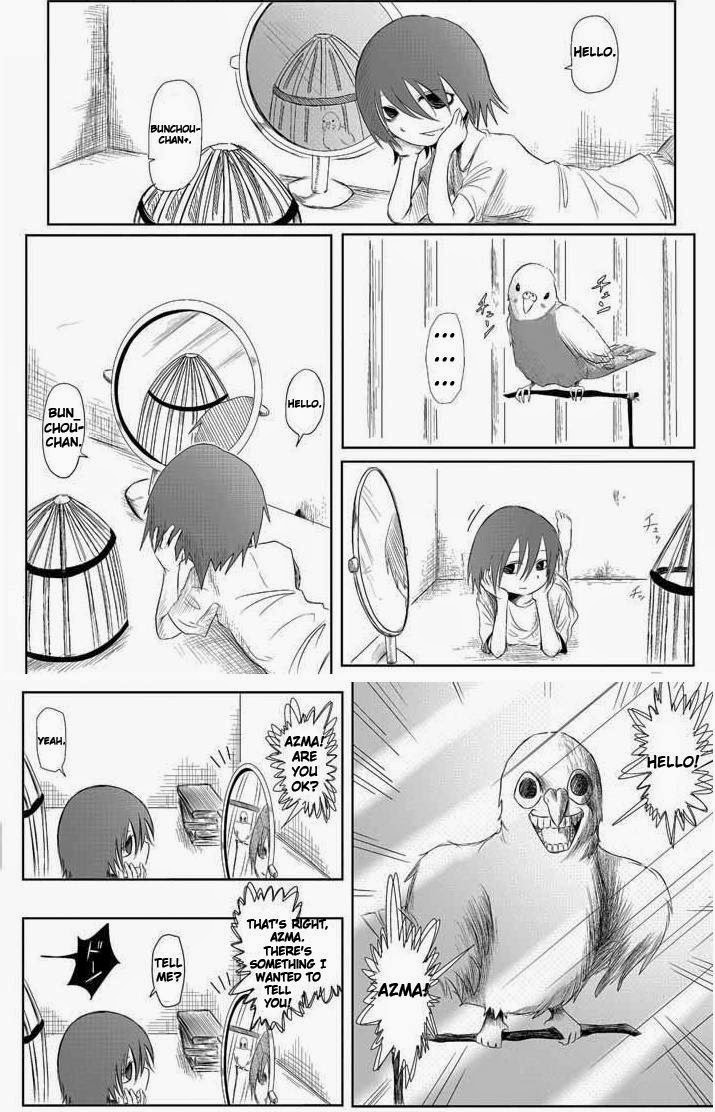 Oh, and Clarissa's Dad comes into her room every night.

After this, the formerly perky animal whose joy of being alive is so completely disgusted by this stint that his only rational reaction to this unpleasant scenario prefers to commit suicide rather than succumb themselves to an unfair reality.

This unflinching honesty of a sensitive issue was what attracted curious readers to read her other equally wrenching and short stories.  It doesn't help that Clarissa is stuck with a family who's more interested in keeping up appearances as a tight-knit nuclear family, even if they have to bully their youngest child into playing that role.

However, keeping up appearances can only go so far before the cracks begin to show.

Clarissa's situation is made all the more tragic by her mother's insistence at wanting to keep up all semblance of normalcy despite all evidence to the contrary.  Azuma also has a family of four, two brothers, a pedophlilac father and an abusive mother.  No need to guess what similar situation happens to the main character of Sekai Oni.  She's taken in with her uncle, her closest relatives' foster family, due to her mother's disappearance.  It's not her father, but considering the mental abuse, it might as well be. 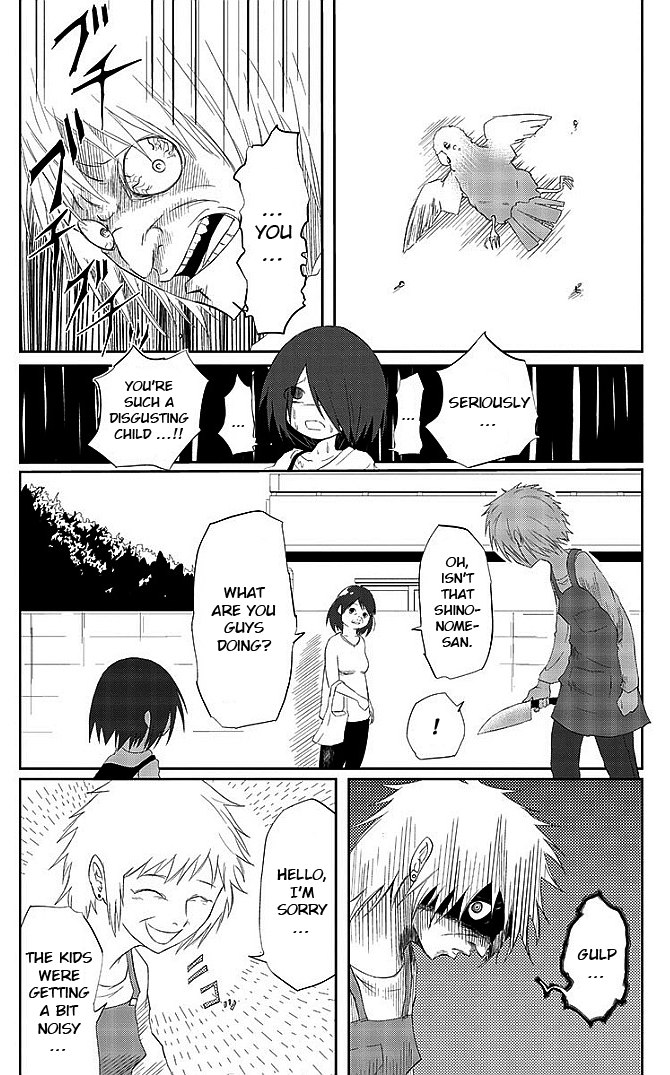 While this would be considered a soul-crushing existence for anyone, part of the appeal of Manga is that it explores escapist scenarios for powerless protagonists.  In this case, escape takes the form of an alternate universe for people afflicted with ATtLG Syndrome.  (Only now does it occur to me that in this aptly named Wonderland world, does Azuma's name could be a bastardization of Ozma from Oz.) 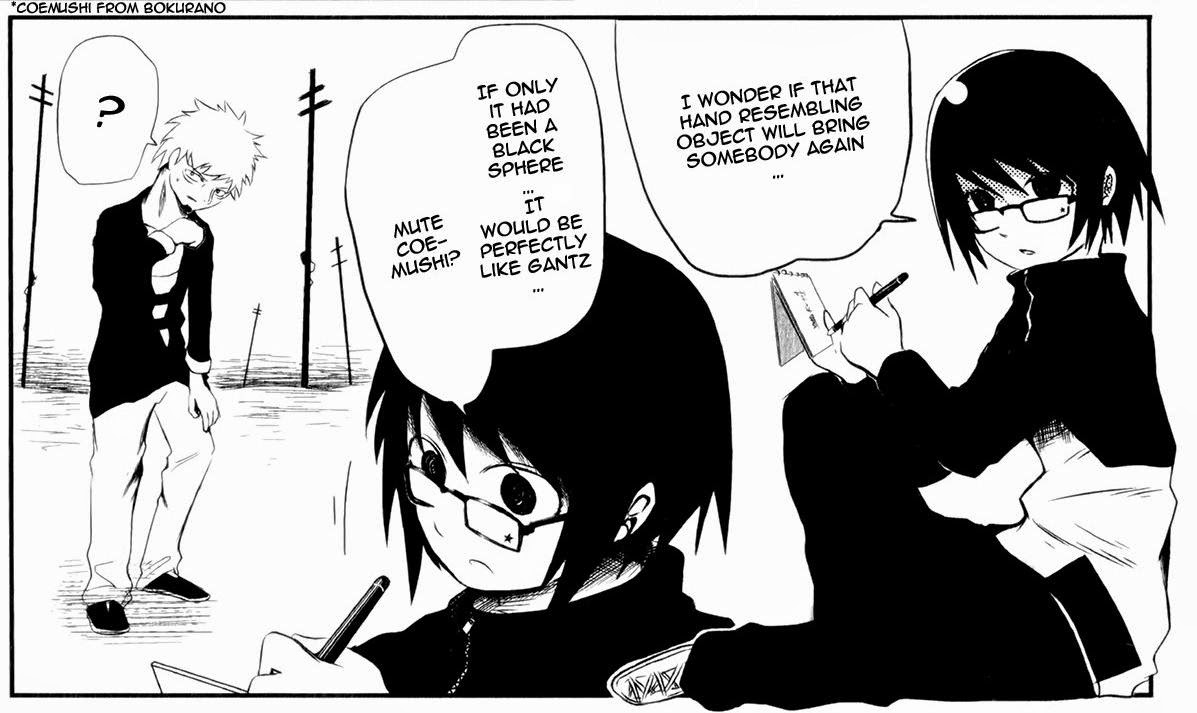 This group of unlikely individuals are given the basics from a a perpetual maniacally grinning creature called Cheshire Devil.  While this could be considred a larger version of Kyubey from Madoka Magica, the similarities end there.  For one thing, he seems quite knowledgeable, as well as ignorant about the situation everybody's in, and is trying to make as much sense of what's going on as much as anybody else.  Later chapters show that despite his posturing, he's just one of dozens of equally clueless employees working as a kind of company for saving the world from destruction.  The most maddening aspect of this creature is that unlike other mascot familiars who keep things as ambigious for as long as possible, Cheshire Devil has a tendency to simultaneously reveal lots of information while revealing almost nothing at all. 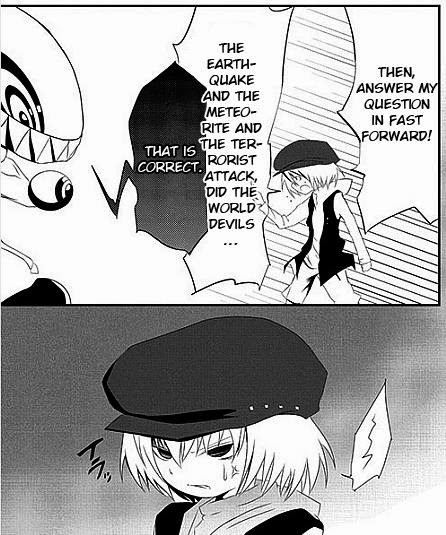 Part of the fun comes from figuring out the rules as you go along.  The purpose of gathering people with ATtLG Syndromes is to have them fight World Devils whose very existence are causing literal cracks to appear in reality.  While this premise is extremely familiar to other themed Mangas like Gantz, it's much more ambitious and tightly plotted in comparison.  (Gantz just seemed to pile up various plot threads without ever putting them to use, relying instead for a Robotech invasion at the end.  The vampires who seemed to be a major game-changer at the midway point turned out to be simple window dressing.)  This kind of theme is so popular that it's even heavily referenced and expanded upon within the first fight scene. 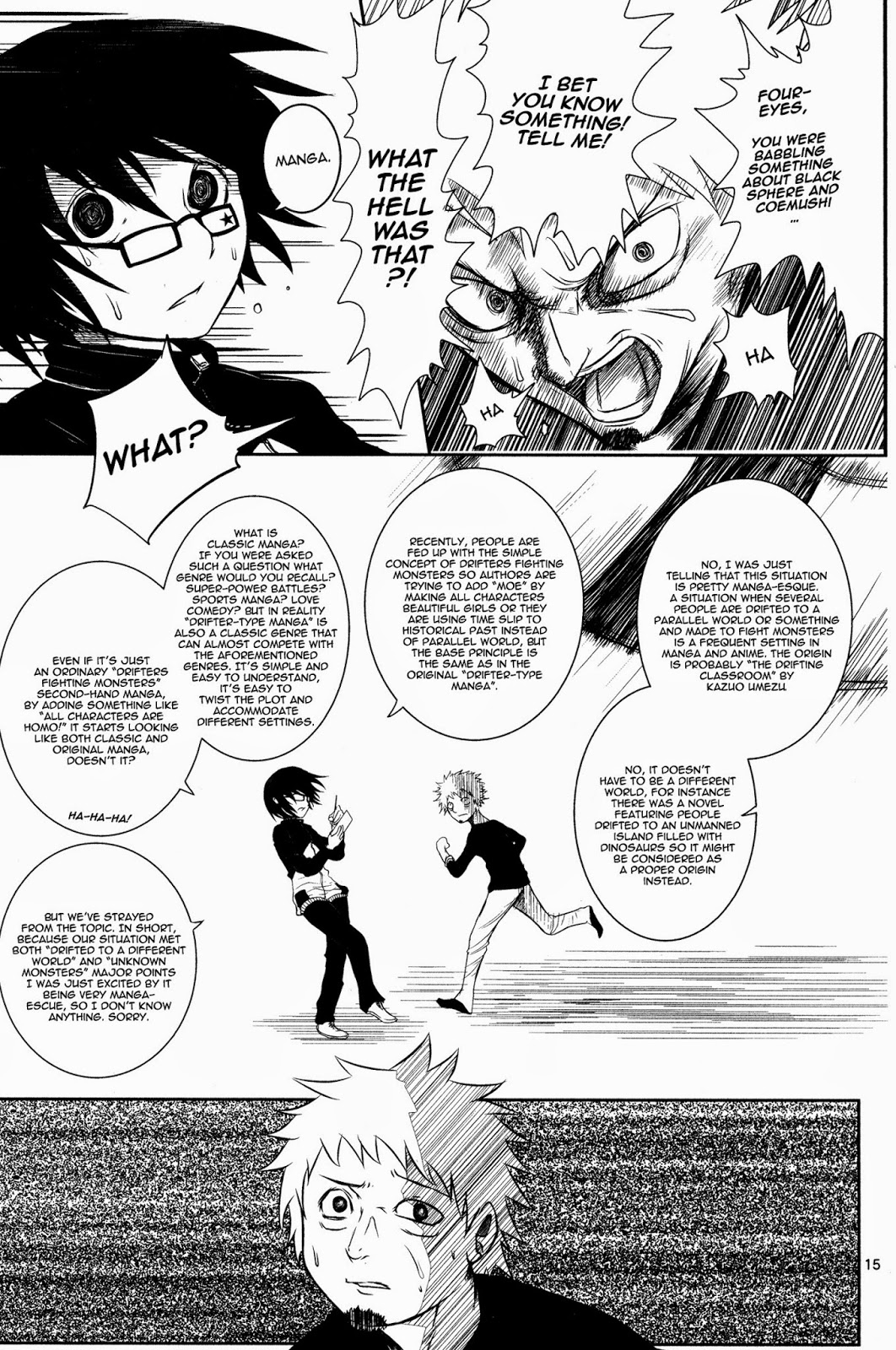 Unlike other similar Mangas such as Bokkurano Ours, Tenkuu Shinpan, Kamisama no Iutoori (As the Gods Will) and Cage of Eden, where shocking things happen for the sake of it, and are basically an excuse to show awful people forced into doing awful things that they wind up enjoying for the thrill, Sekai Oni goes the extra mile to show more nuanced representations of its cast.  Despite showing familiar archetypes, what's remarkable is how much it resists portraying stereotypes.  The jailed druggie army fanatic who shows realms of compassion and intellect.  The nymphomaniac whose actions for affection are more sad than erotic.  The Otaku Manga editor who can differentiate between fantasy and reality. 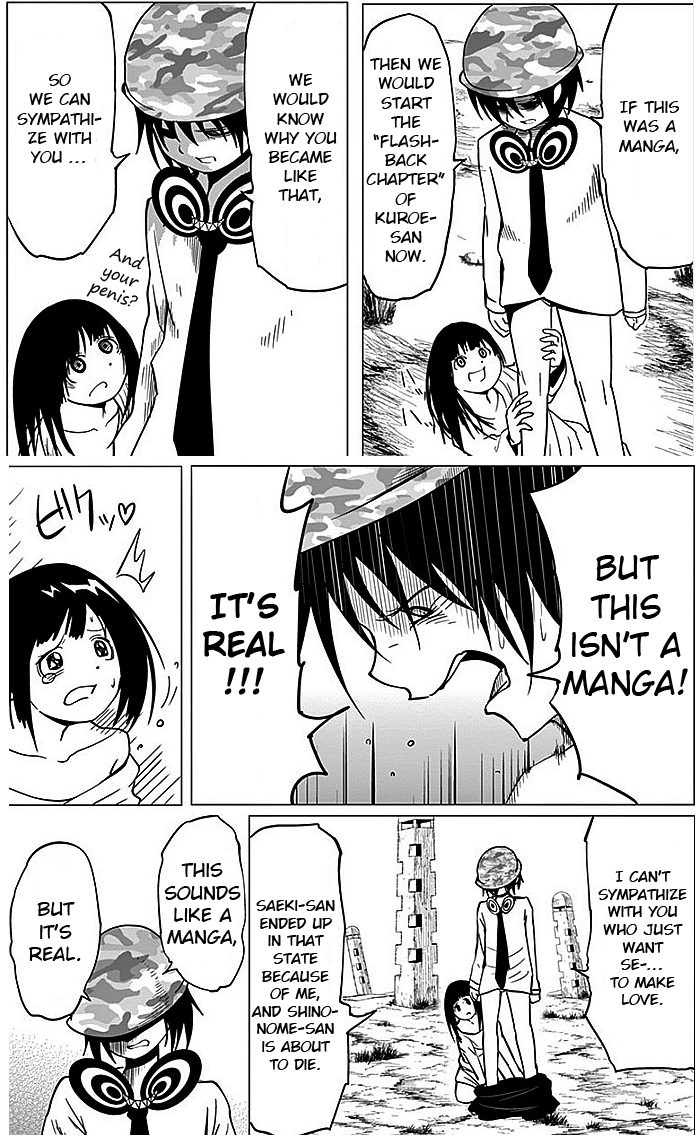 Too often, the need to appear shocking in stories relies in presenting sensationalistic scenarios in order to spread controversy about the issues of the day, but that's meaningless if there isn't a strong story to back up these unsettling topics.  What's needed in fiction is not more realism, which is always unpredictable and depressing, but authenticity, which is sorely lacking, and much more powerful and identifiable.  (Also harder to portray, which is why so many opt for the quick-'n-easy option)

It occurs to me that I've been going on about the setup of the conflict without going into detail of just how these people with ATtLG Syndrome are expected to fight against these monsters many times bigger and stronger than them.  The form of attack comes from "Materialization", only applicable when they're in the mirrored Wonderland world.  However, it's slightly more complicated than simply summoning a weapon to do your bidding - simply summoning a gun is meaningless if you're not aware of the physics and internal makeup of its inner workings.  Simpler tools such as blunt objects and knives work better. 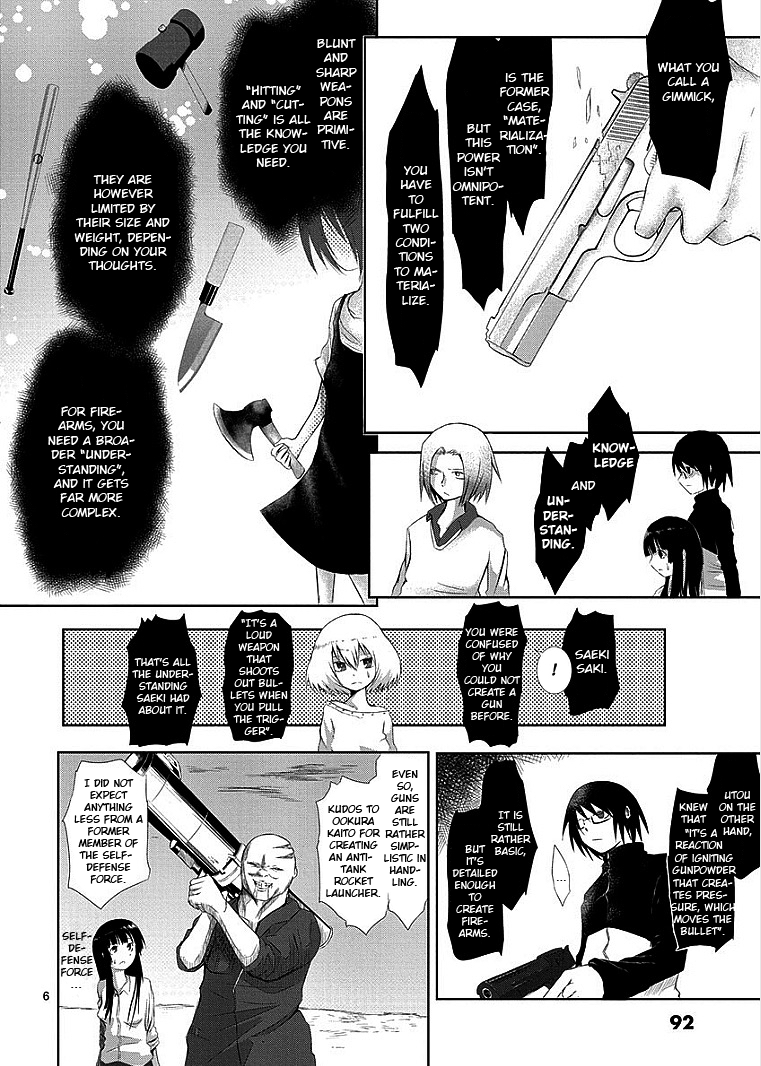 However, this "materialization" carries a huge drawback.  A person successfully killing a World Devil results in that person losing the people closest to them.  While the others are understandably hesitant to continue fighting after hearing this, Azuma sees this as a huge motivation for the opportunity to kill off her foster family without being blamed for it.  Consider it a form of karmic payback.  (If only Clarissa could have a similar option...)

While the basic setup of defeating Six World Devils seems simple enough, since the latest scanlation is at the 4th defeated World Devil, recent events show that the World Devil crisis extends far beyond just killing a specific number, and is far from reaching a conclusion anytime soon.  It's currently at the 80th chapter with no sign of slowing down.  It's the most popular Manga currently running in Ura Sunday, and I await catching up with baited breath.
Posted by DeBT at 10:37 PM