It's now the 100th anniversary of the First World War, also known as The Great War, or The War to End all Wars, and what better way to commemorate the memory of those who fought in that prelude than reading Charley's War?  Titan Books finished the Pat Mills run with the 10th volume The End last year, and are offering an omnibus collection of the first three books to allow seeing the Somme in all its gory glory.  As with every time around this time of year, you can see a brief once-a-year low-res download of the first arc, which is gone now.

Two years ago, I paid tribute to an ancient relic of the war - the horse.  This year, I might as well showcase another overlooked contributor to the war: 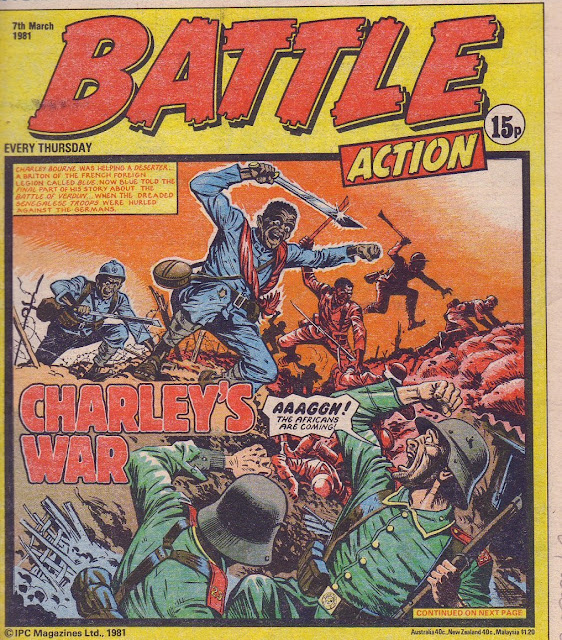 It seems important to bring up Black people at a time when white people all up over arms about an alternate take of Cinderella as portrayed by Black actors, even though Cinderella's name comes from being coated with cinder ashes.  Not to mention outraged comic fans outright threatening Black Cosplayers daring to dress as regularly white characters.  The most extreme example being the fatal shooting of a Cosplayer dressed as the main character from Samurai Champloo.  Then there's the Hollywood sin of whitewashing characters who were originally from other countries and darker skins, and having them portrayed by actors with heavy makeup instead of branching out and actually finding budding unknowns looking for a big break. 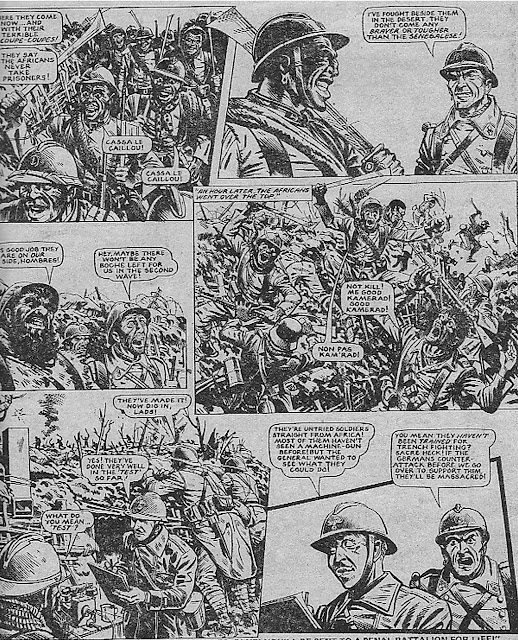 The closest Charley's War gets to portraying other races is during the battle of Verdun with the unfair treatment of the Sengalese Africans, who were basically little more than cannon fodder. 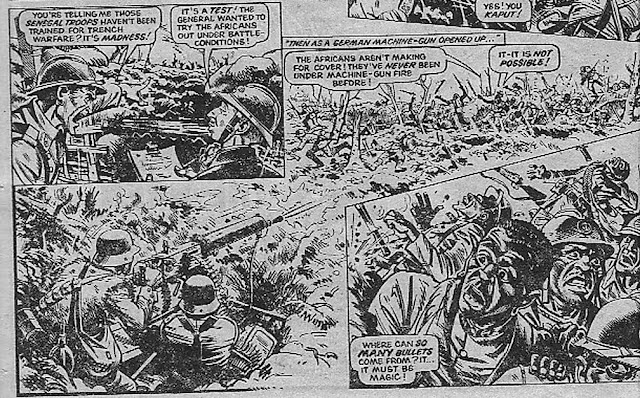 The army rebel, Blue, attempted to override his superior's commands by getting word to the commander, but the only words that got through were some high-sensitive information of great importance, which consisted of "Make sure your buttons are sewn on properly."

Disgusted, Blue and his friends defy orders in order to help support the Africans from being slaughtered. 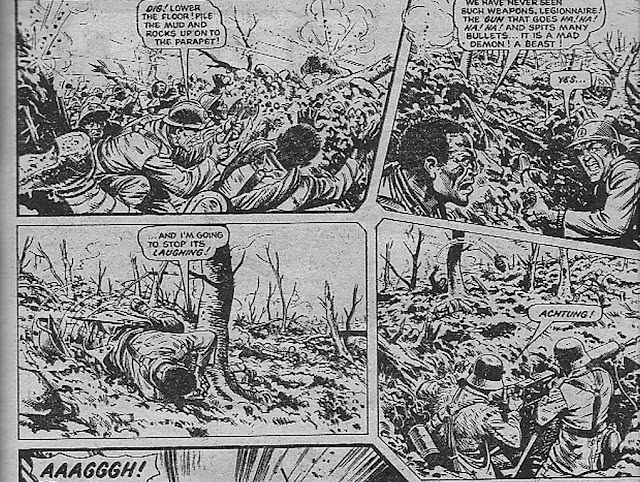 Of course, Blue winds up stealing the show, which isn't too surprising, since he was loosely modeled off Jack Nicholson.  The hijacking of the Black man's plight by the enlightened White man is nothing new.  In order to appease to the masses, they've had to swipe away charismatic Black's chance in the spotlight in favor of safe and comfortable White spokesmen, since executives believe that audiences can't possibly identify with ethnic characters that look differently from us.  Such short-sightedness has led to instances such as Winston Zeddmore being a late addition to Ghostbusters instead of being there at the beginning.

I greatly identified with children in books and movies who looked like me.  Why is it so hard to convince others that having more racial variety in main characters  would be greatly beneficial to under-utilized audiences that are grossly overlooked?  It's not a difficult conclusion to reach to.  Apparently, we can suspend disbelief when it comes to flying wizards and Russian Unicorns, but having a well-rounded Black protagonist is considered too unrealistic.


This is just to give a minor note to a little known contributor to Canada's Great War - The No. 2 Construction Battalion.  Better known as the Black Battalion, they were made up entirely of Black people, (but had white supervisors) who were implemented at a time when their efforts were looked down as little more than interferers in a "White Man's war".  Ironically enough, Blacks wanted to join the army to help their country, but were turned down simply because they weren't white.

Their efforts were not so much involved in actual combat as it was for laying down the foundation for advancing troops, such as laying down barbed wire and constructing bridges.  Actions which brought them in direct line of fire from the enemy, and without any weapons, save their shovels.  They not only had to worry about disease and enemy fire, but also (un)friendly fire from less than receptive soldiers who grudgingly didn't want to admit their helpfulness.  The only reason we even know about the 2nd Batallion is because of the written diary entries of Captain William White, the army chaplain, who recorded the events for posterity.  Founded in 1916, the second Battalion was disbanded in either 1918 or 1920, leaving it as a minor footnote in history. 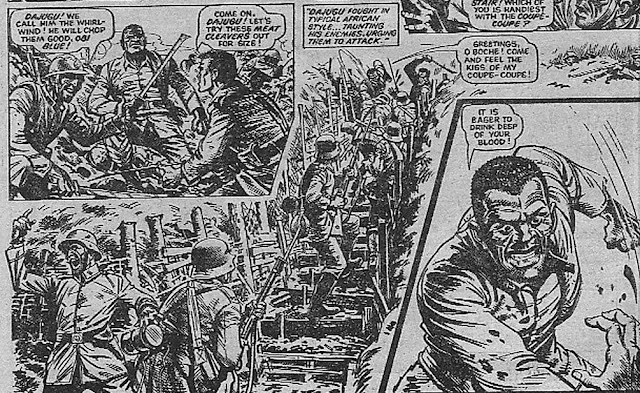 The actions of the Battalion were so underscored that when brought up to attention by High-ranking Canadian Military Officers, they said they'd never heard of them before.  And these weren't rank amateurs - they'd been in the military all their lives.  There's a bio-historical movie Honour Before Glory, based on these events that aired on the CBC in 2001 that's making a comeback.  Sadly, the lack of available resources means I can't give a concise summary of events, let alone recommend it for viewable watching.  Some historical representation of Canadian history is either overly schmaltzy or downright depressing, leaving little chance of repeat viewings.

The irony of espousing the need for diversity while being unable to accurately portray the plight of undervalued members of society is not lost on me.

A page from The Breath of Wendigo gives this little factoid:


It is estimated that over 12,000 North American Natives fought in the Allied Forces during the First World War.  However, the US Government had yet to grant them full Citizenship. 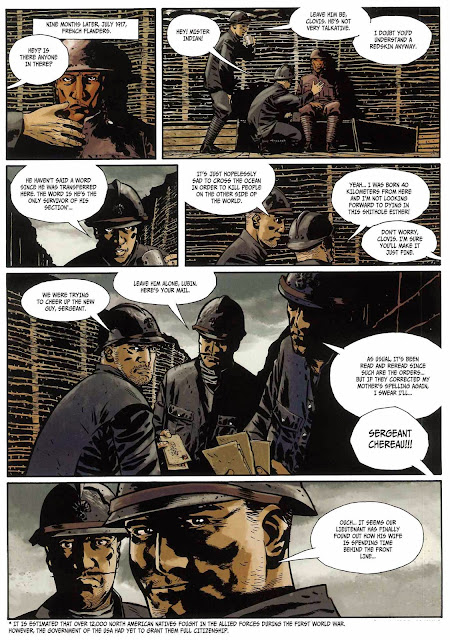