The recent For Better or for Worse rerun had this little ditty that originally ran on November 28, 1985.

The first commentor on the rather redundant Foobiverse Livejournal pointed out that this date was part of a large joint effort with 175 cartoonists worldwide to create comics around the theme of campaigning for the famine in Africa.  This was spearheaded by Charles Schultz, Gary Trudeau, and Milton "Steve Canon" Caniff.  (The last one I was unable to find)

If you pay attention to the particular comics that happened around this time, the stand-alone strips from their collections becomes more significant. 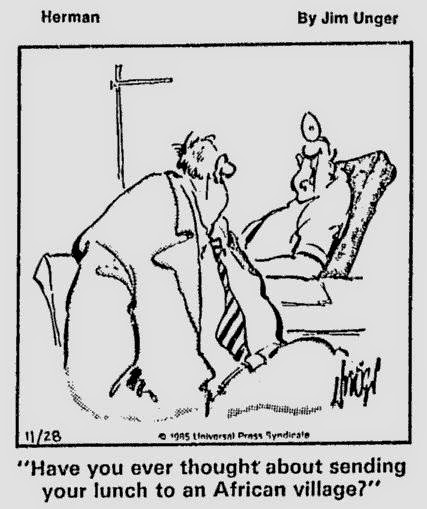 Recently, I was given notice of the discovery of the fact that there were online archives of microfiche newspapers.  In addition to seeing old articles, this was also a boon to finding many old newspaper comics that hadn't been collected.  Of course, it's not completely perfect - there's a lot of gaps here and there, and there are entire years missing.  Not to mention that some pages are aligned horizontally, and most of the space seems to devoted to ads.

To make things more problematic, everything's in black and white, and the quality isn't always very good, and is sometimes out of focus, making reading a chore. 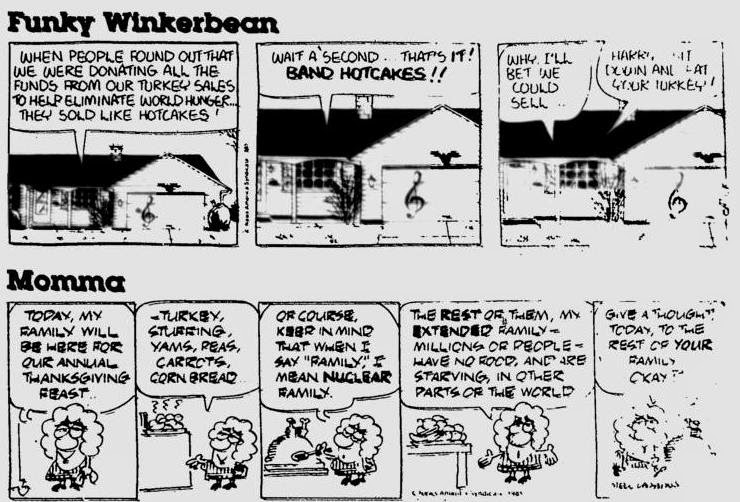 Still, it's better than nothing.

Normally, I don't include Far Side comics out of respect for Gary Larson's request not to do so, but in this case, I think I can make an exception. 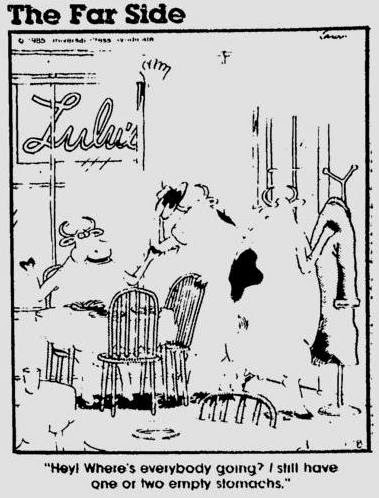 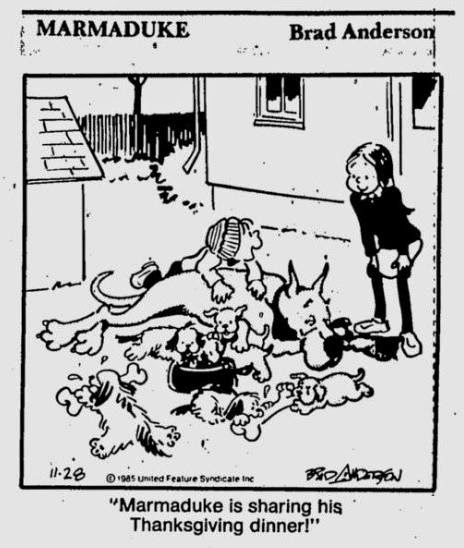 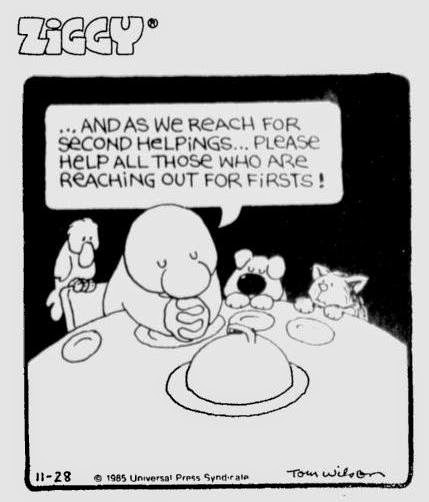 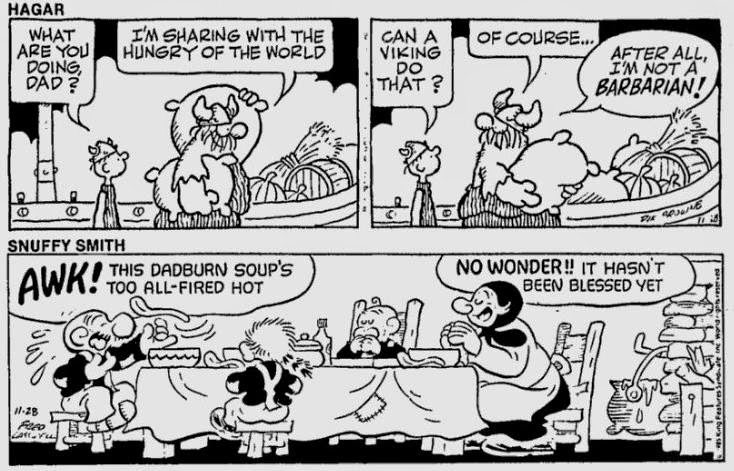 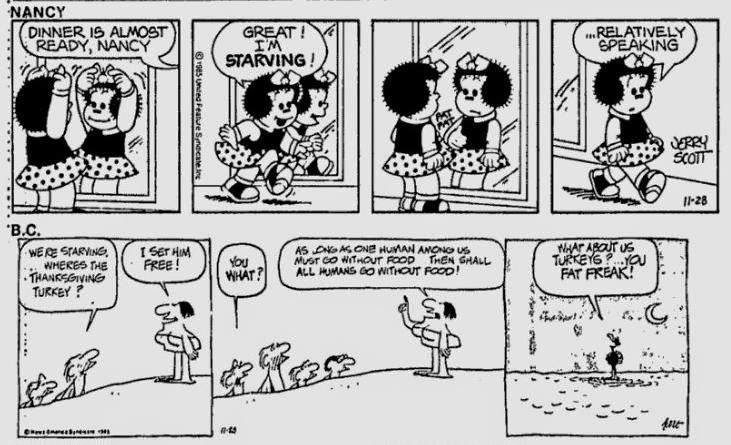 In case it's not entirely clear, the Turkey is left adrift in the middle of the ocean on a barebones raft at night, which is why he's complaining despite being spared. 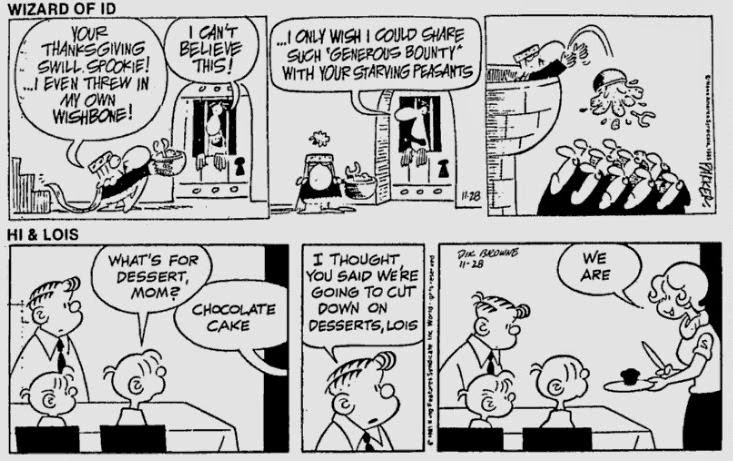 Some cartoonists were unable to make light of a heavy subject, leading to these examples, which were not unlike those "Very Special" episodes of Christmas, only replacing Thanksgiving as a theme. 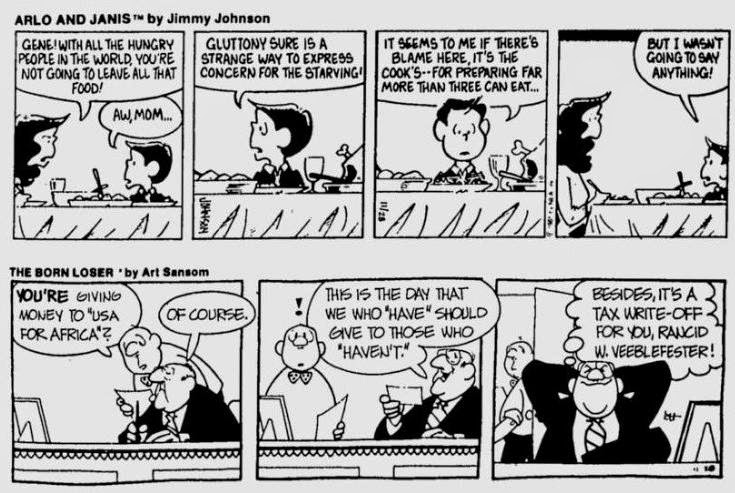 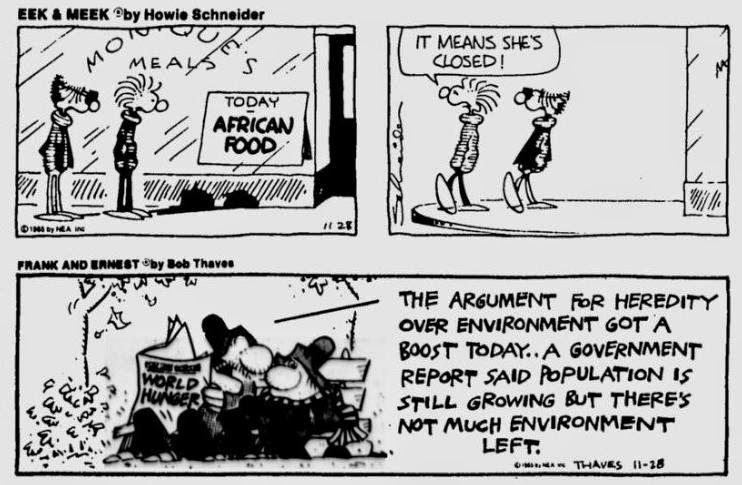 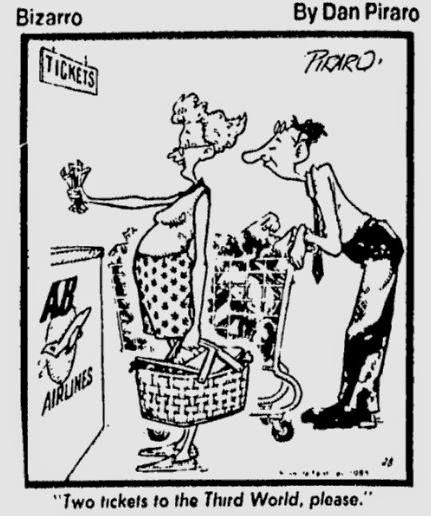 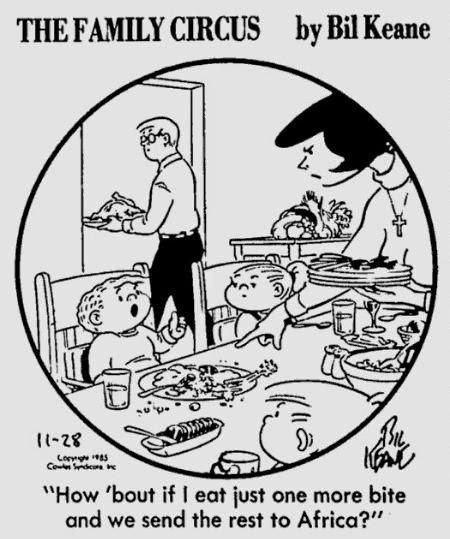 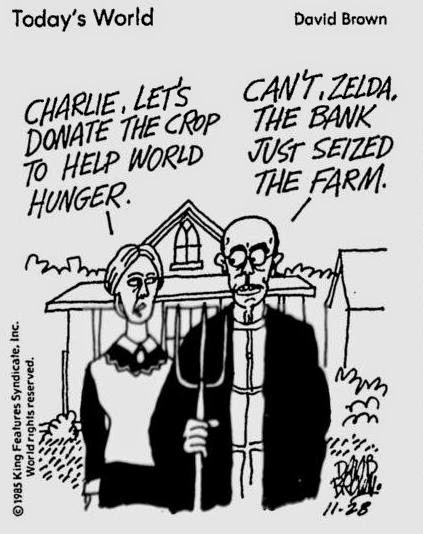 Because of the special status Thanksgiving has in the States, some papers either printed the relevant strips a day early, or held them back for the day after. 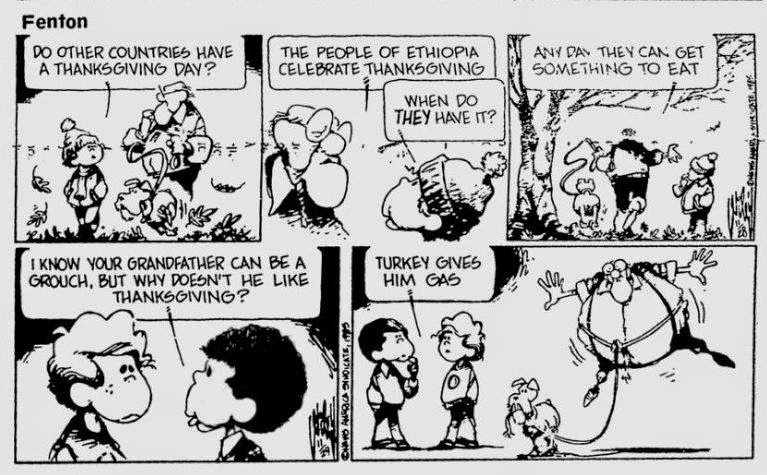 One rather unusual installment was during an arc in Marvin which was a retelling of The Wizard of Oz. 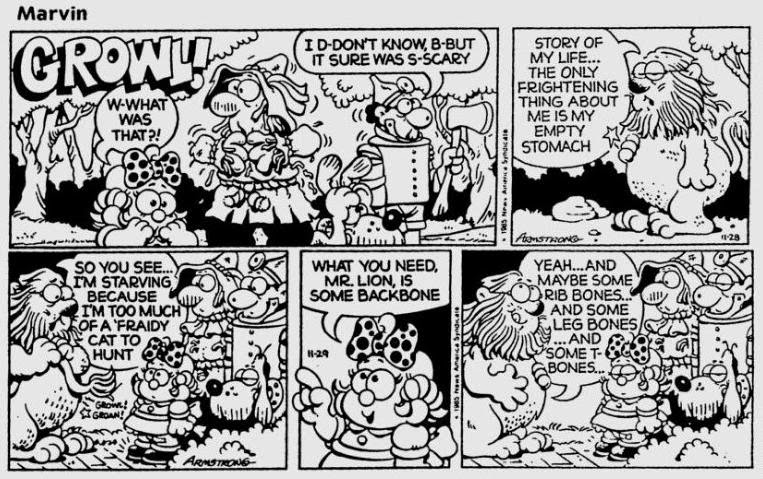 Some serial strips were slightly more ambitious, and tried to implement the subject into their storylines with varying degrees of success. 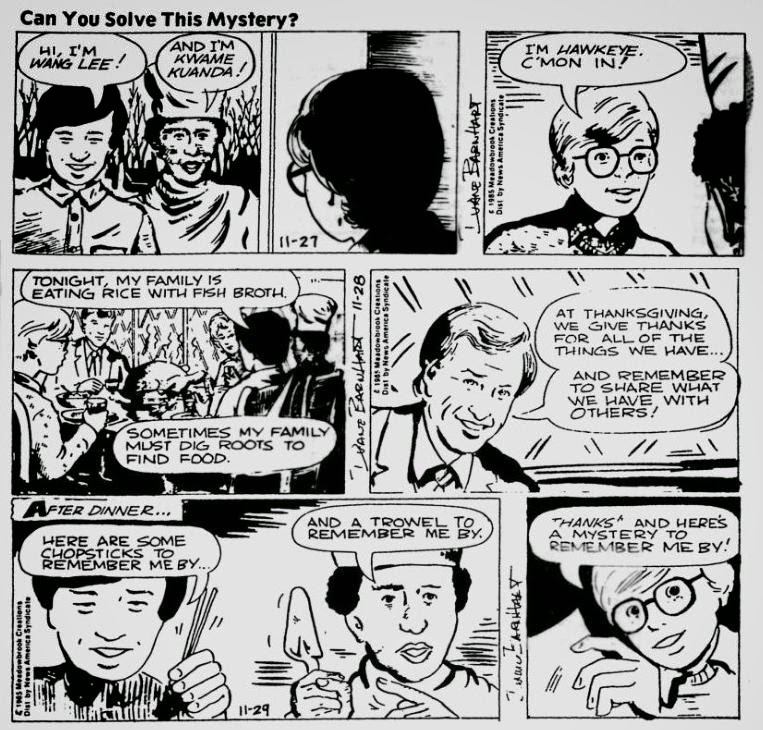 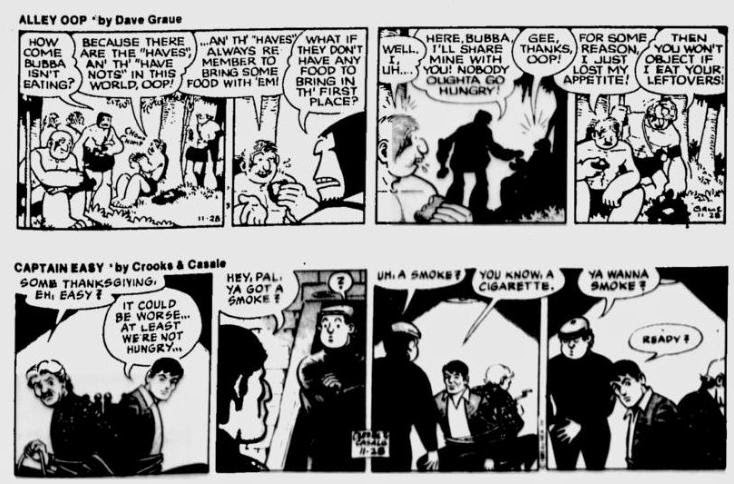 The clumsiest attempt to reconcile this noble effort comes from Stan Lee's Spider-Man, narrative consistency be damned.  There's even a noticeable bulge along the box wall to show where the extra text was roughly inserted almost as an afterthought.

There's a reason Superhero stuff shouldn't address real-world concerns; they're basically escapist fantasy, totally unsuitable for exploring concepts where strongmen are able to brutalize purse snatchers and bank robbers in dazzling feats and displays of power, but are unable to address corrupt world powers half a continent away.  Not that that hasn't stopped adults who've grown up on the stuff from trying. 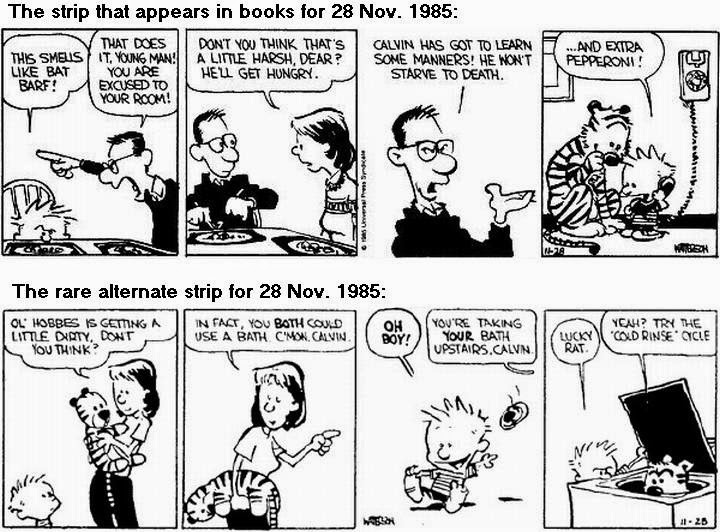 While half of papers got the washing machine version, others got the dinner scene.  It's as if Bill Watterson realized that he had the opportunity to be part of a larger organization, and regretted it when he had the chance.  As a first effort, it's okay, but not great.  Other strips handled the theme of hunger or starvation more memorably.

One thing that surprised me amidst the sheer amount of available material was how much of it was cobbled from truly obscure sources.  The most surprising result was discovering Hartland, by Rich Torrey, which is basically a Bloom County ripoff, using Binkley and his dad as models.  (Another comic, Committed, lasted longer)

There were two comics that had Sam as the first of a duo in their title.

While going through the online archives, I only managed to make it up to the 'M's, before deciding I'd had enough.  WARNING - they get worse as you go along. 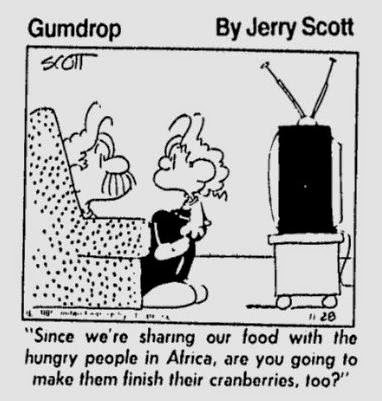 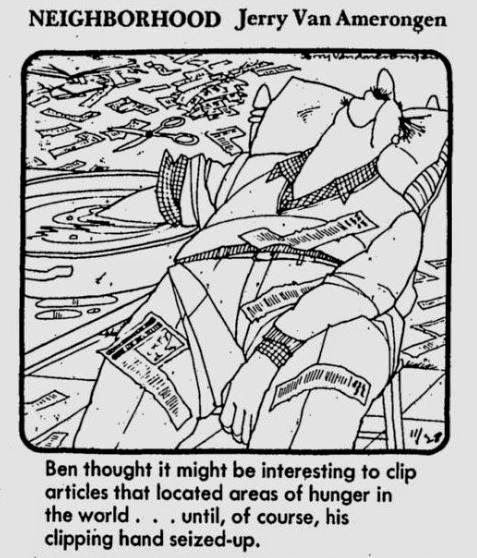 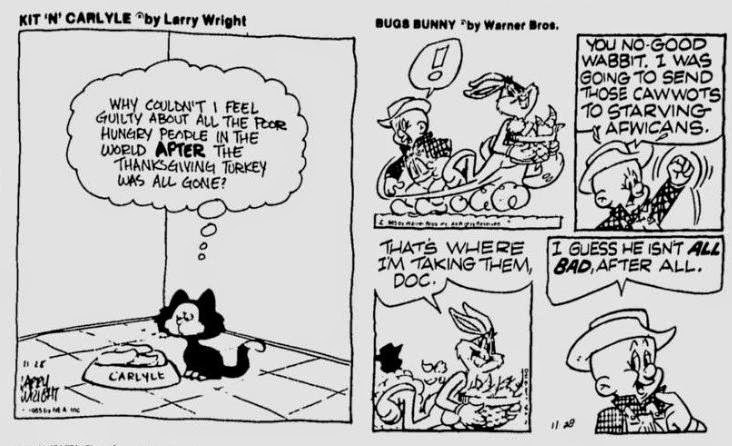 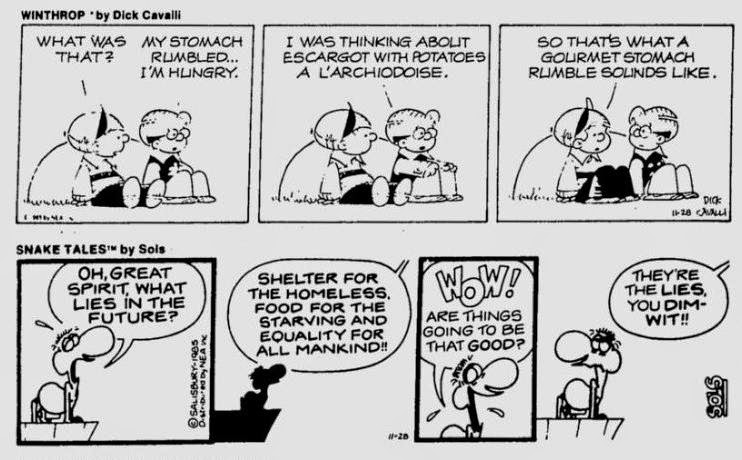