Last week, there was an article about some old-school translated Manga along the vein of Mr. Arashi's Amazing Freak Show.  Among my quest to find published Manga I could read (this was the dark dark days before scanlations), I scoured unlikely places in search of this reluctant material in the hopes of finding anything that might satisfy my itch, no matter how lousy.  In a gaming store, I came across publications of exotic material such as Comics Underground Japan, Panorama of Hell and random issues of Venus Wars.  Of course, I only read these books in the store, not wanting to make an impulse purchase I would regret later.  I don't regret not buying these (though I'd like to see select stories in Underground again) because I wasn't much of a fan of the stiff art, and wanted something I would reread on a regular basis.  This is my prerequisite for any book - is it good enough that I'll want to keep it on my shelf for posterity and inspiration later?  I didn't purchase the Freak Show book because the artwork and story were completely underwhelming and unattractive to my eye, save for one tiny exception on the credits page. 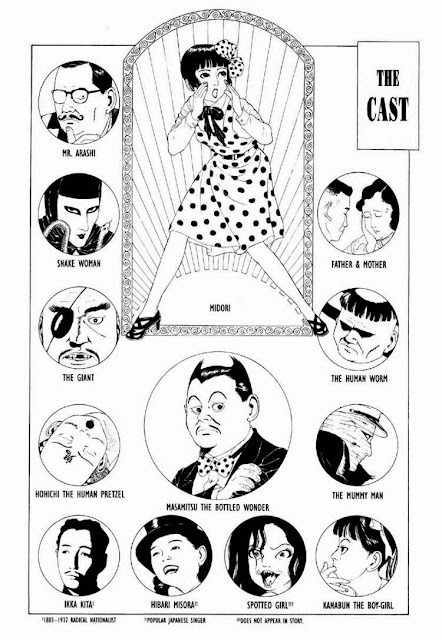 I went through the entire book, hoping that this character would show up, and she never did, because she seemed better drawn than any of the other people in the book.  It wouldn't be until years later when reading an entirely unrelated Manga that I found out the meaning behind this random exclusion: 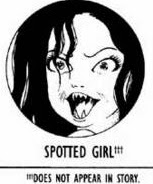 Turns out The Spotted girl was actually someone who showed up in Reptilia by Kazuo Umezu of Drifting Classroom and Fourteen fame.  I even pointed it out to the reviewer, who never even noticed this until I revealed it to her.  The embarrassing thing was, she'd also read the Freak Show Manga, and didn't make the connection until then.  In addition, I showed the picture of the Spotted Girl in an earlier comic post before.  I wonder how many people would've made the connection? 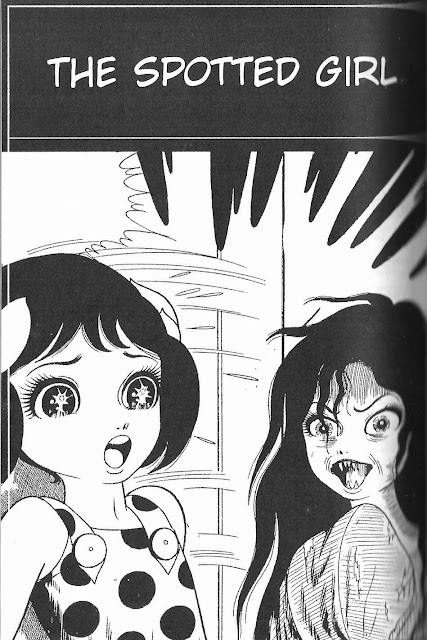 These kinds of visual in-jokes can be confusing to people not already used to the visual lingo that's so prevalent to them.  One of the many barriers to licensing Osamu Tezuka was his numerous nuances to interjecting humour into normally serious stories or sudden changes in art styles, which would've played havoc with someone expecting a more conventional (and consistent) style.  One can only wonder how confusing this would've been without explanation.  The most popular rendering of other artists is by using cartoony characters based on 60's gag Manga, or by overly dramatic blank Shojo eyes.  Likewise, whenever anybody wants to reference Umezu, it's usually in the vein of his shadowy wide-jawed screaming expressions.  Anybody who sees these instinctively knows what these are referring to.

There was another Umezu Manga, Cat-Eyed Boy, which I purchased upon the mistaken assumption that it would have the same crawling insanity that was typical of Drifting Classroom.  Turns out his works like any other authors, can be pretty hit and miss.  They were a series of loosely unconnected stories where the protagonist was overly ineffective in helping out, and was mostly reduced to being a spectator in his own book.  Normally, this wouldn't be too bad in and of itself, but when you've got a bunch of loosely defined powers, some degree of competence is expected.  For all its rather tame stories and unremarkableness, there's one scene in particular that stands out for me: 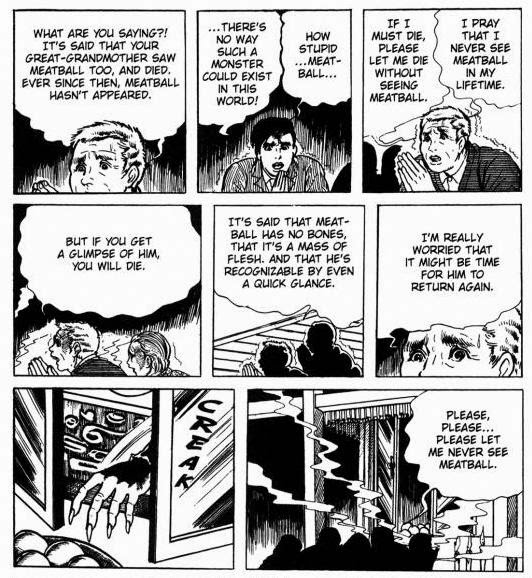 Whenever I see this, I can't help but think of Robert Crumb's nonsensical Meatball comic of the same name.  I like to amuse myself in thinking that there's a Japanese monster going around hitting people with meatballs and inadvertently changing their lives for the better.  Which makes the old man's reluctance to meet up with the dreaded meatball monster that much funnier - he doesn't want his life to improve - he's happy enough being miserable on his own. 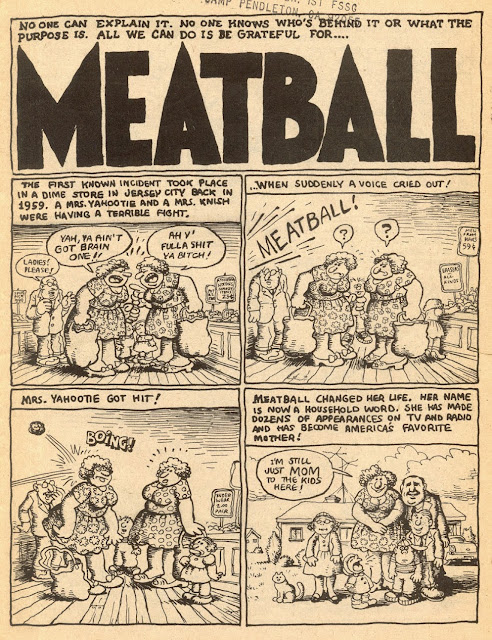 Now, thanks to the internet, we have forums that explain references that might not be obvious to first-time readers, including cameo appearances of people in the style of Nobuyuki Fukumoto, who, for the moment, is still somewhat of a cult figure.  Granted, there's bound to be all kinds of spoilers within, but that's only to be expected.  At one time or another, we're going to be exposed to certain tropes that the rest of the world already knows. Though contrary to expectations, knowing how the story turns out is less of a deterrant and turn-off than you would expect.  As long as we've got some general knowledge of how things are going to turn out, we're not going to feel as cheated, and can pay more attention to the other story elements that we would've missed the first time around, rather than focusing on a small insignificant piece that's not relevant.
Posted by DeBT at 11:12 PM