It's Anything But Cute

There was an online satire of Starbucks' attempt at using an advertisement that was in a similar vein as MAD's Fold-ins.  Naturally, MAD didn't take this tribute lying down, though as one commentor stated, they had the chance to create an appropriate word by using the first and last halves of "Starbucks", but maybe that would be considered too risque for the once unrespectable magazine.  Now that they've sold out, it's become just another tool of "the man". 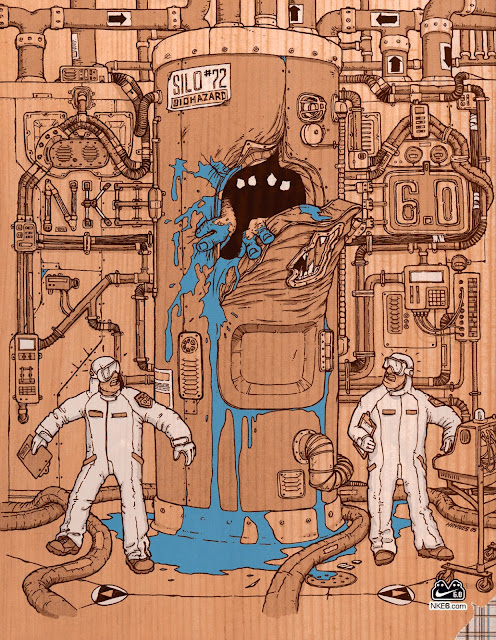 In the early years, advertising in MAD magazine was only possible if they were spoofs of merchandise they were not sponsored by.  Often, these photographic pictures were the only chance MAD writers and editors would show their face without it being caricatured by one of their trademark artists.  Nowadays, ads are shown freely, but the mean streak is gone.  There's little attempt to parody any of them, since that would run the risk of alienating their sponsors, even though the satire would be more likely to be remembered.
Of course, Starbucks' attempt isn't the first time that others have used the infamous Fold-in to get attention.  It's been parodied on The Simpsons, various webcomics as well as Garfield.  Even the great (not yet late) Jack Davis who has had a long successful stint in advertising and movie posters fell prey to this tack.  But his stint at replicating the long-standing back page of the humour magazine was rather half-hearted to the point where you could figure out what the hidden picture was just by mentally folding the two halves on your own.
Years of creasing the back pages to the point where the final image is hinted at the creases has resulted in mentally figuring out the puzzle by sight alone, and covering up the text at the bottom.  In most cases, rather than buying two issues (one to fold and one to keep in perfect condition as per William M. Gains selling tactic to obsessive collectors), you can save yourself some time and agony by just covering up half the image and putting a thumb for the text at the bottom.  At the height of the Fold-in craze, the final image could be notoriously difficult to figure out, but straight buildings and stiffly positioned people made solving the puzzle easier without help.  Rarely will you get a picture of someone in profile that isn't instantly obvious.

In the late 2007, there was a series of Dodge Caliber ads that upon first sight, looked like just another typical car advertisement.  There was some kerfuffle on comic forums about cars being out of the price range of the intended readers. 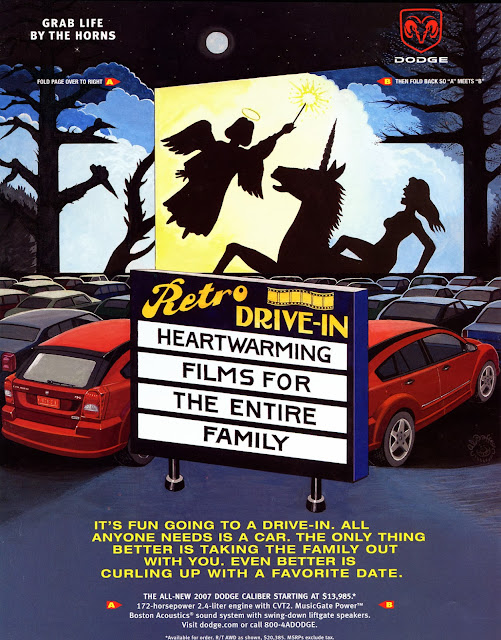 But considering that their audience were largely in their 30s, and their subject material contained either talking heads or shock violence, it was kind of like complaining about all the blood in a R-rated horror movie.
What struck me about these was that they were of higher quality compared to recent Fold-ins.  Al Jaffee admitted that he had trouble thinking up new themes that would resonate with today's media-savvy audiences, and that his wacky inventions that were in his old articles would be considered old-fashioned today.  The concept of having a phone in a car or self-stirring cups were concepts we could only dream about.  (Though safety balloons for everyday use is too wacky even in an hyper-security nation) 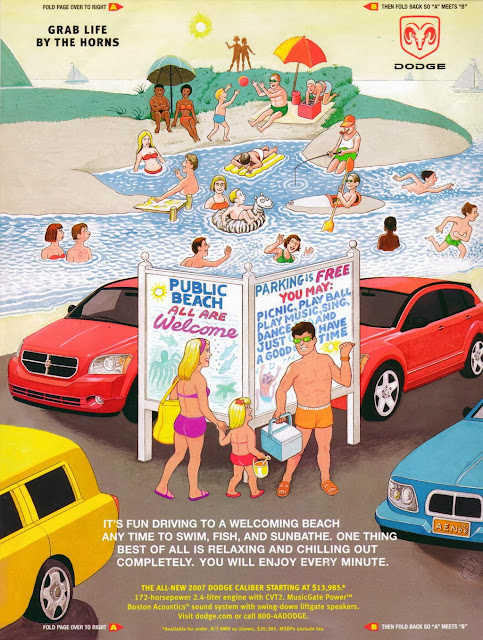 If the creator's efforts seem less inspired over time, it's likely from the pressure of having something important to say every issue, and that can weigh heavily over inspiration.  Creative instinct can be stilted from the lack of following your personal needs no longer suiting your readers.  Chances are if some effort's been put into it, there'll be some hidden words buried in the picture that won't be apparent until you actually fold the page itself.
I suppose there's no greater motivation than an increased paycheck. 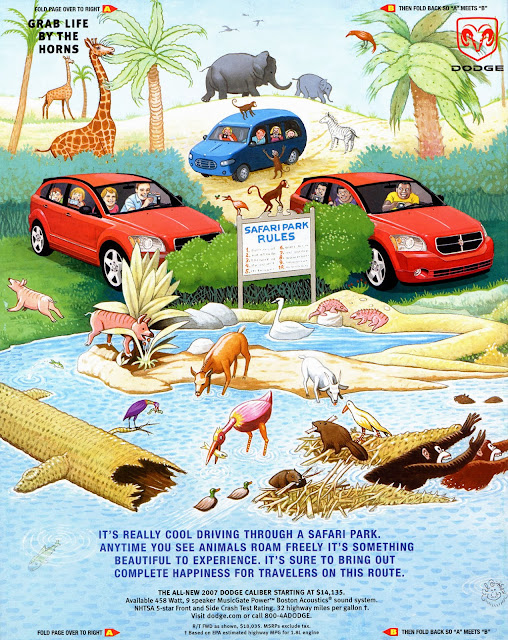 There's now a collection of all of the Fold-ins from the 1960s to 2010, which is basically an extended version of Fold This Book!, that only selected a few samples throughout the magazine's publishing history.  In the earlier copy, the full page was shown on one side with some commentary at the bottom and a snapshot of the cover it appeared in, and the folded image in a neater cut than you could ever attempt without rulers and protractors.  I have no idea whether these ads are part of the package, as I haven't seen the insides yet, but am willing to state a retraction if I'm wrong.
Even though it was a short stint, I wouldn't mind seeing this kind of creativity from advertisers again.
Posted by DeBT at 7:56 PM