One of the things I regret that other countries have more of that we don't is the news summarized up in comics.  Taiwan has their insane Sims-based version of the news and Japan is known to have the headlines converted into Manga.  The closest we've got to that are editorial cartoons, which can give the public reaction to the subject, but not really give any context to the material in question.  Unless you're already familiar with the latest hype, much of what's being shown may not make much sense, especially if they're seen years later after the shock has worn off and the world has forgotten what's happened.  Fortunately, there's still other comics that I'm reminded of that perfectly parallel these kinds of situations.  Unfortunately, these incidents happen rarely, so I have to take opportunity of the chance when it happens. 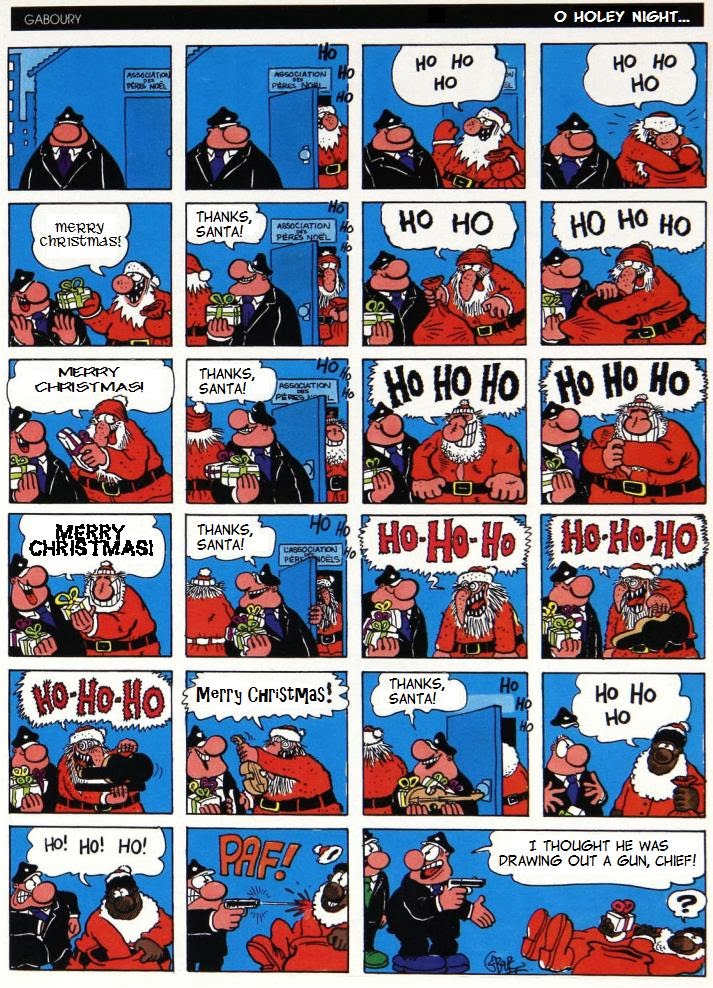 Just recently, there was some controversy over a news announcer who proudly proclaimed that the appearance of a Black Santa was an aberration.  (Equally disingenuous along those lines is the claim that Jesus was White, when it's more likely that his skin was more likely to be darker given the region he was in, before becoming whitewashed into the Hippie-Boy we know today.)  To further add to the controversy, there was an Indiana University that had a Jazz-playing Black Santa on a bulletin board with questioning statements of whether such a person would be suitable for the job, inferring that a Black man would be more likely to visit the Ghetto and steal your valuables. 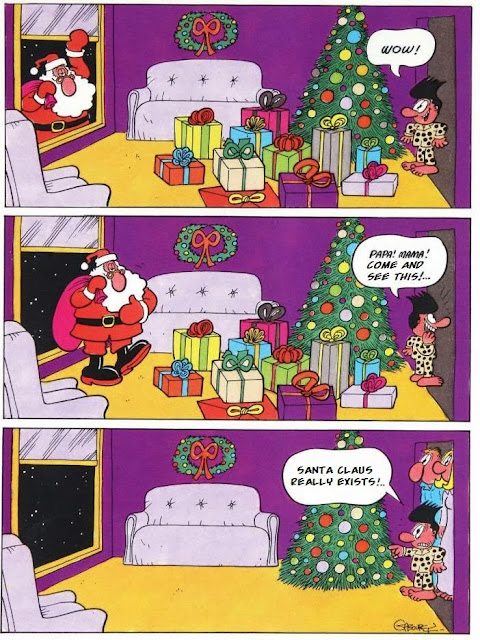 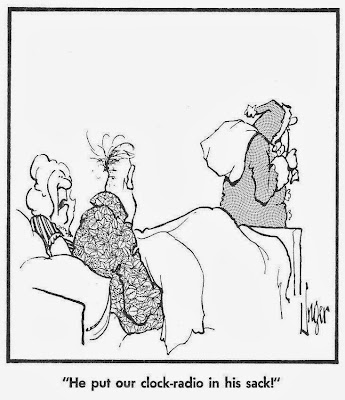 Then there was the harrowing tale of Sexual Harassment at a Comic Convention where a female comic creator was routinely hit on and put down by a fellow male comic creator.  I suspect the amount of natural teasing (which has never felt natural to me) is so ingrained in male mentality that their offensive treatment towards women is their default setting.  As has often been pointed out, their passive-aggressive hostile behavior would be considered completely inappropriate if vented towards men.  You never hear of male CEOs being described by the kind of suit they wear, but that double standard is always used to describe a female power figure.  Sadly, this isn't the exception to the rule.  There have been untold accounts of men blatantly attempting unforward advances towards the fairer sex while casually dismissing their work as inferior and any claim of abuse as being completely irrational. 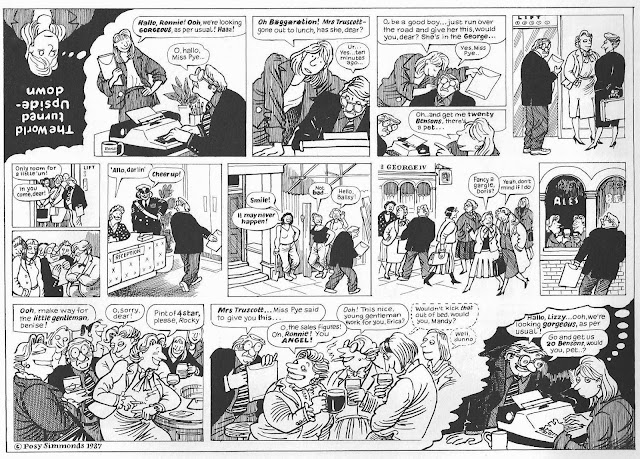 Even with great empathy and understanding, it's difficult for men to have any idea of how off-putting this unwanted attention can be, given how much of a attention magnet they tend to be.  It wasn't until I reached the end of this Posy comic that I understood how unusual the above scenario was, since it looked perfectly normal to me.

Lastly, to the surprise of no one... 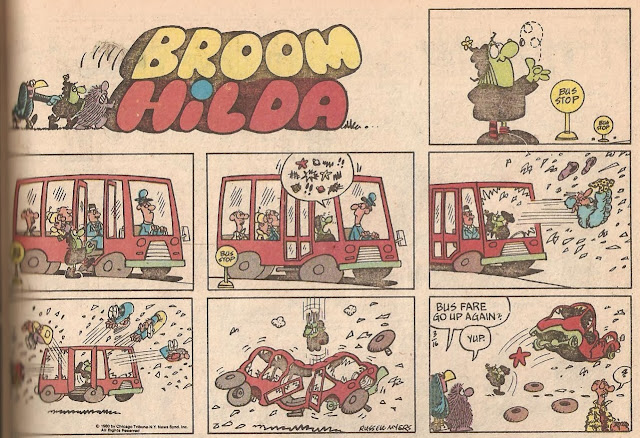 As long as we're getting closer to the New Year, I might as well show some Prescient MAD predictions.  The magazine is known for creating fanciful horoscopes into the future with amusing plausible outcomes of tomorrow today.  But there are times when their other parodic features can either wind up being completely spot on (or be fodder for inspiration) for the following.

In a list of awful TV shows that only lasted one episode, attention was paid to a notable show titled Heil Honey, I’m Home!, which was basically putting Adolf Hitler and Eva Braun in a sitcom setting with Jewish neighbors where wacky shenanigans would happen.  You'd think this tasteless episode would be the result of ignorance in the same vein of Hogan's Heroes, but this was shown in the enlightened age of 1990.  To make matters worse, many of the Nazis portrayed on these shows were played by none other but actual Jewish people who took Mel Brooks' The Producers level of embarrassment to full effect.  The only thing that could be more embarrassing would be if Jews were responsible for inventing the fetish dominatrix Vitch of Concentration Camps.  Oh wait, it turns out they actually were, and this blatant spread of pornography was the only window to spreading information of the horrors that happened at the time.  Which goes to prove that the fastest way to spread a new piece of technology is to show some skin on it.  The internet only started out as a forum for nerds to talk in Compu speak until somebody figured out the Turing code for showing pictures and things evolved (devolved?) from there.

In MAD there was an article on Future Groundbreaking Sitcoms, which ended with... well, see for yourself. 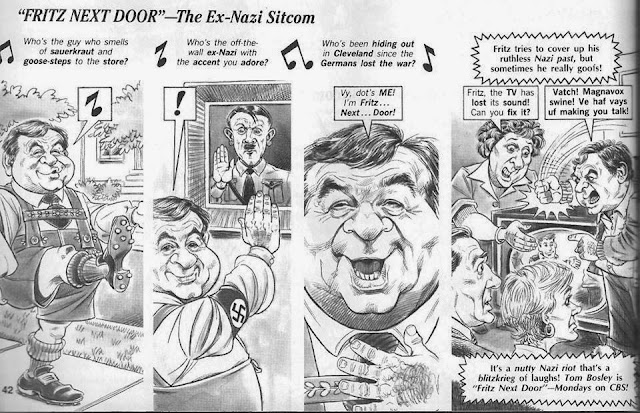 Lastly, there's the Minute Maid commercial where Popeye and Bluto were on much... friendlier terms with each other than usual.  I'll just leave this here to jog your memory.

Apart from the Quaker Oats commercials where Popeye had a temporary change of diet, this could count as an extreme example of character assassination were it not for Popeye's natural flexibility to adapt to any situation no matter how absurd.  Obviously the inspiration for this commercial came from the MAD article about the Rarest Animation Cels in History.  Any guesses whether there would be any Cels of the above commercial in an age of Computer colouring?  If so, the claim could still be entirely valid.

In an age where Slash fiction between characters of the same sex even happen to glance at each other from across a distance (it doesn't even have to be on the same continent or planet) you're sure to find reams of text devoted to the obvious forbidden love that's just threatening to tear apart the fabric of society.  Yaoi and Brokeback Mountain just made an underground obsession culturally acceptable, even if some courts show reluctance to let same-sex marriages become a reality.