On Moment of Cerebus, the question came up of whether there would ever be a comprehensive collection of all the alternate comics and short stories that while not shown in the regular 16 phone book albums, were still entertaining in their right.  Everything ranging from the five missing issues (#51, #112-113 and most of #137-138) to supplementary stuff only seen in the issues (ElfGuest) to the various fancomics when Cerebus was starting out and was at the peak of its popularity among Indy cartoonists.  (Particularly the Teenage Mutant Ninja Turtles crossover which could have some copyright issues)  Then there's the colourized silent specials for various anthology magazines and a two-page redraw of an early conversation with the Regency Elf, no to mention the numerous ad promotions, fancomics, editorial feedback and numerous head-sketch parodies of the Aardvark in various disguises.

While most of the above can be found with some creative searching on the few websites devoted to the maddening comic, there's one that's remained elusive despite it being indirectly tied to the Cerebus narrative.  That would be Cerebus Dreams II (no relation to the first, which was fittingly drawn by Conan artist, Barry Windsor-Smith), originally printed in the headache-inducing Aardvark Vanaheim in 3D before being reprinted years later (in a more understandable format) in the 10th issue of Following Cerebus.

Dream imagery is a large part of the Cerebus mythos, with imagery and runaway narrative taking place against the backdrop of what's happened before, but that wouldn't show up until later.  On its own, there's nothing particularly interesting about it.  Cerebus floats past some weird objects while suspended in perpetual free-fall with the maddening association of dream logic.  What may not be apparent upon first sight is that it's actually a reimagining of this scene from the first part of Church & State: This may be easily passed over by many readers who aren't used to cursive prose, especially if they're impatient at "getting to the action", and isn't relevant to the rest of the plot, so I'll break it down in the following:

Most Holly: Cerebus had a dream last night.  Cerebus was flying over this body of water and there were these doors all around him, just sort of floating above the water. 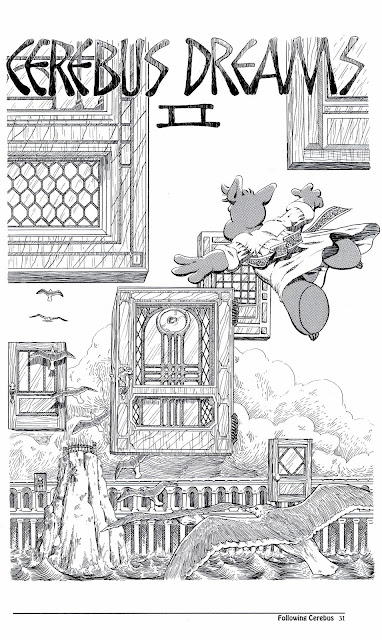 Up ahead, Cerebus could see this stone column sticking up out of the water and Cerebus flew toward it.  When Cerebus got to it, the water had risen almost to the top.  There was this stone post and on the post was a box and in the box was a crown.  Cerebus tried to grab the crown but a gust of wind came up and blew Cerebus away.  Then Cerebus was blown against this big glass door and it broke and Cerebus was stuck. 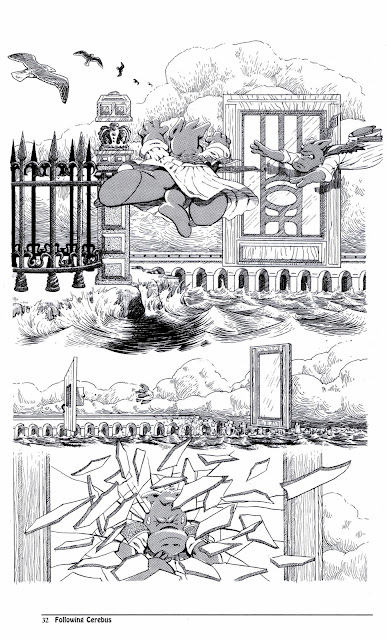 Then the glass door started floating back towards the stone column which turned out to be a statue of Cerebus.  Cerebus kept trying to get out, but he was stuck. 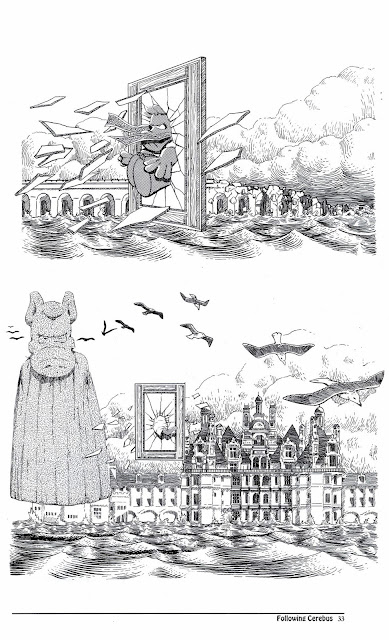 As Cerebus got closer to the statue, it started to crumble to pieces.  Cerebus thought he was either going to be crushed by one of the falling chunks or squeezed against the statue's forehead. 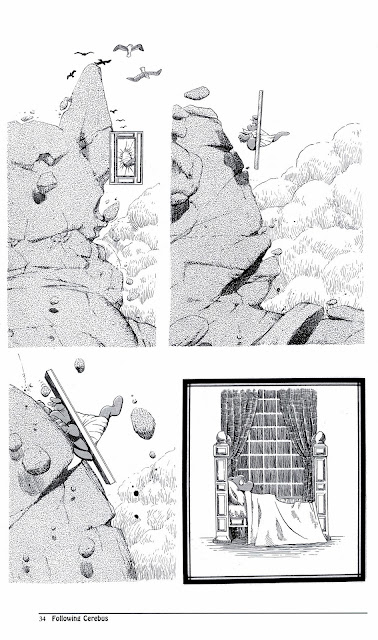 Muffin: And what happened Great Cerebus?
Most Holy: Cerebus woke up with a craving for raw potatoes and onion soup.
Posted by DeBT at 8:53 AM