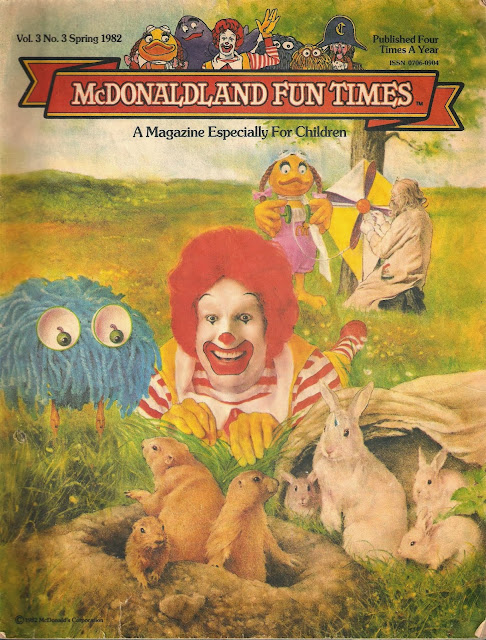 Of all of the McDonaldLand Fun Times that I picked up in my regular visits to the fast food restaurant, this is the only single issue I've kept over the years, because I felt it had the most quality stuff inside worth keeping.  Right away, the front cover has a level of painted realism that would gradually be lost in later installments which would become increasingly simplified.

A slight warning - some of the easy puzzles have already been solved.  Not by my own hand I assure you, but by my mother who's able to find word association with the greatest of ease.  This was nothing more than a simple exercise to pass the time.  I should also mention she's a monster at Boggle and Scrabble where I struggle to string together anything longer than four words.  It's no wonder I hate playing these games with her, because even when playing with a handicap, she routinely beats the pants off everyone else in the room. 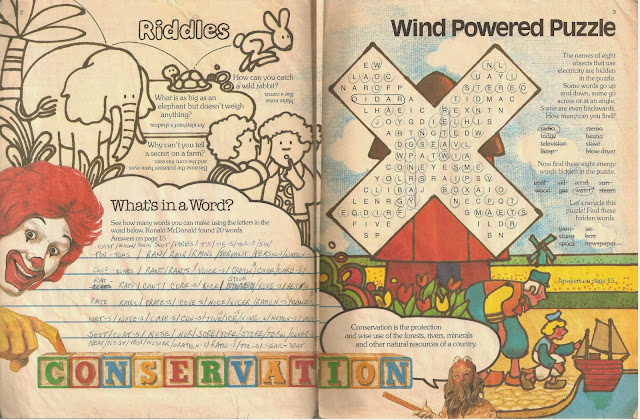 Next, we get a little taste of the influence of the environmentalists craze that was beginning to pick up steam in the 80's.  What I liked to imagine was the process the "junk" would've taken inside the machine to produce the total product at the exit. 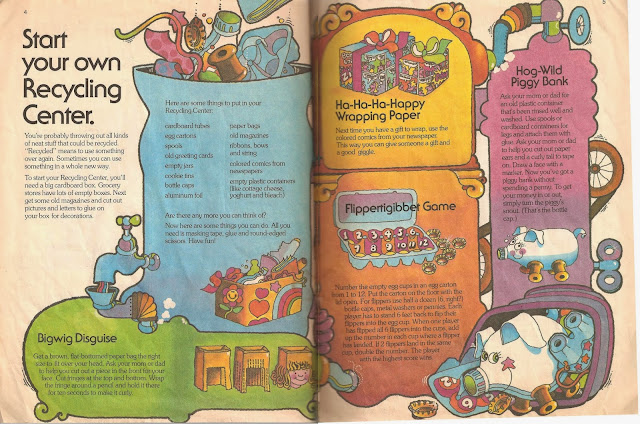 Confession time - I've never actually read any poems that showed up here, and I always skimmed over this page because it wasn't very interesting to me.  Also, sans its text, it was very similar to the page next to it. 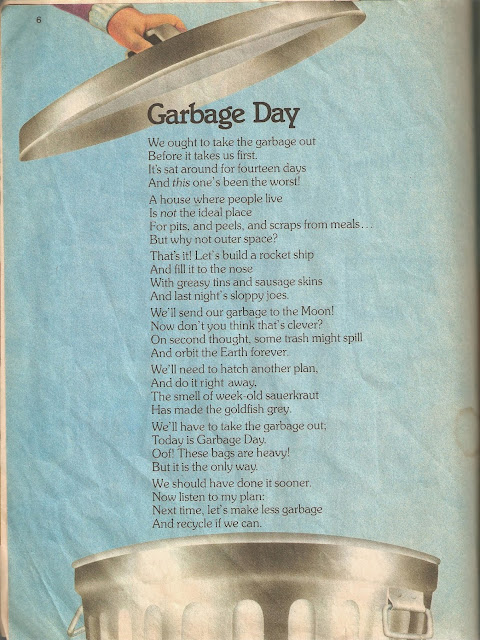 Draw-it-Yourself pages must be the easiest part of a children's book to do.  Just leave a mostly blank page and allow the reader to do your work for you.  Since I was abysmally neurotic about drawing anything that would be perceived as imperfect, I never bothered to fill in the page.  Besides, the side details and background colouring were enough for me. 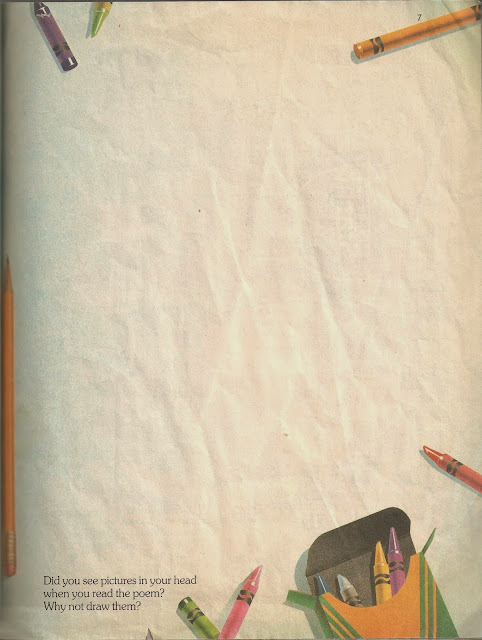 Keeping in the theme of protecting the planet is a slightly amusing look at the various ways you can succeed and fail to save energy through various means in the form of a board game.  The environmental message was something I superficially thought was perceived important enough to warrant keeping since it was "sending a message", and anything that didn't have any overt commentary wasn't worth its time. 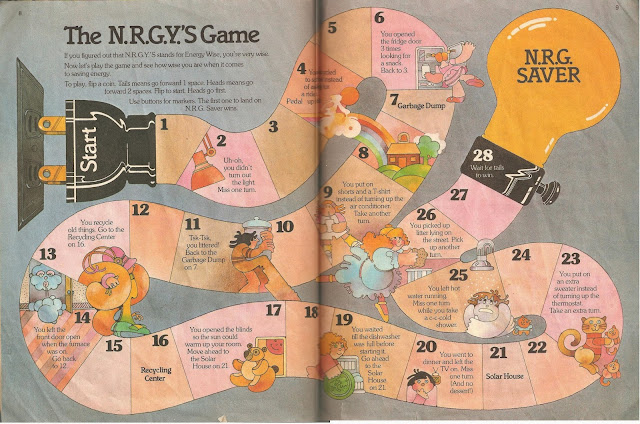 The second reason for keeping this was this explanation of the symbiotic relationship between crocodiles and plovers.  In addition to reminding me the name of those birds, it was also a handy reminder of the potential direction McDonalds could've gone.  The overall impression is something that would not feel out of place in a Rudyard Kipling Just So story. 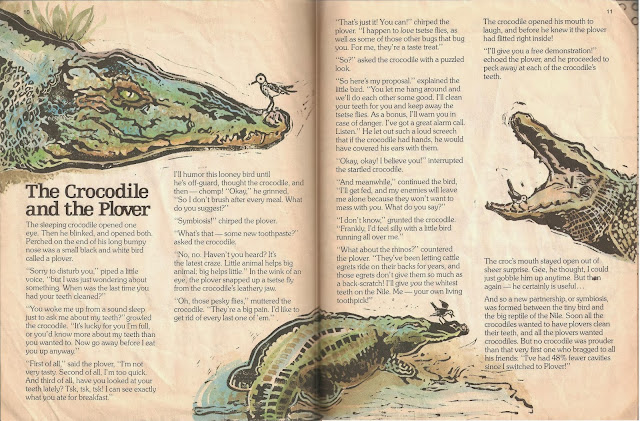 So far, we've got word puzzles, childcraft instructions, environmental tips, a Porquoi story, and a few riddles added to the mix.  Something I just realized now - there's a surprising lack of the McDonald mascots in this pamphlet than you would think. 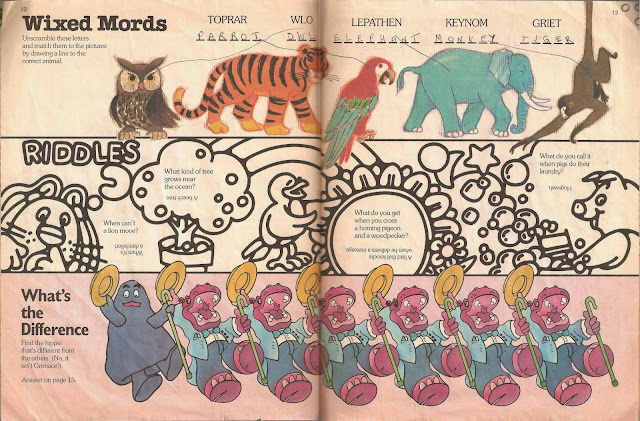 The number one reason I kept this magazine was for the second board game at the end.  Normally, these kinds of games are passable due to their luck factor (and having to use a coin instead of dice), and seems almost redundant with the NRGY game seen earlier, but what saved it was the monkey's facial expressions. 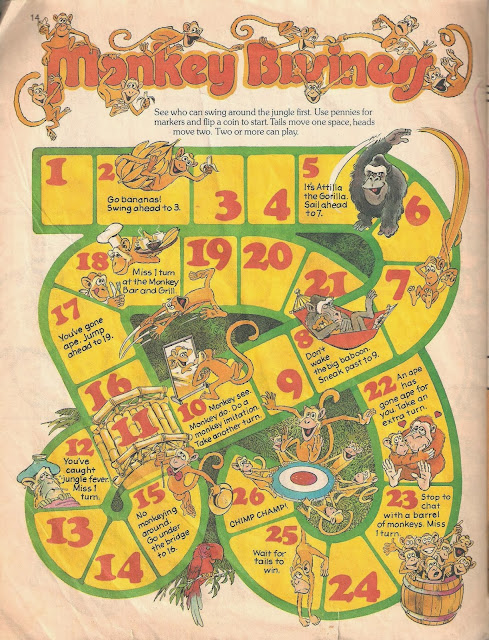 Then for completists, there's the answer page, most of which have been solved already.  Including the answers to the picture right above the answers.  I understand there's space restrictions and all, but that's kind of cutting corners there isn't it? 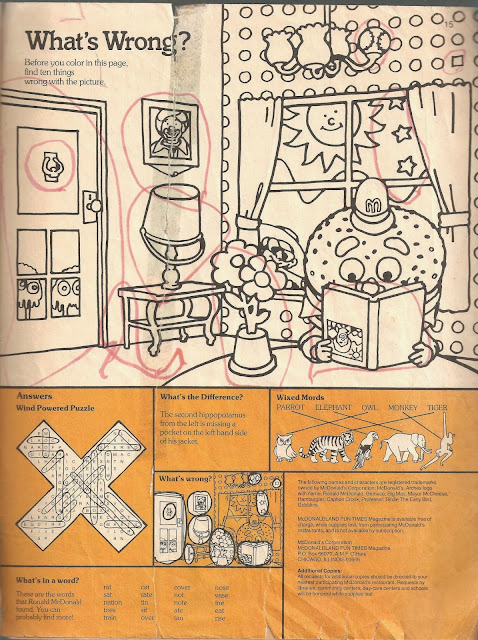 At the end, we get a perfunctory inspirational message from the clown mascot himself. 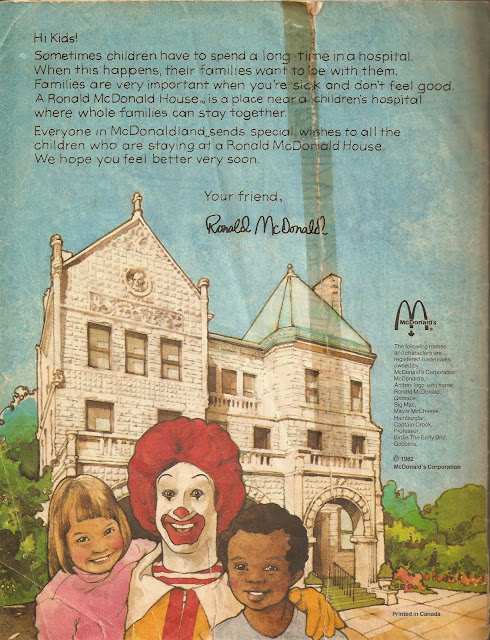 The only other memorabilia of the McLFT I have is a tiny cutout of a character sheet that was part of another board game that I foolishly took a sharp instrument to.  Because of this, I felt unwilling to keep a part of nostalgia that was obviously disfigured, so I got rid of all of the Fun Times, confident that they would reside in my memories, and wouldn't need them to reference any explanation to anybody unaware of their existence. 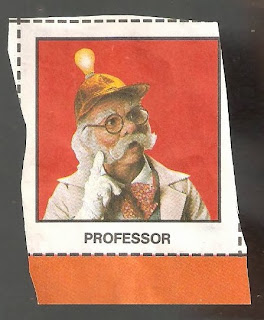