One of the things I outlined in Mathematical Equivalence of Comics (one of my blog posts that I'm most proud of), is that there were comic pages tackling topics of varying length depending on the kind of comic used.  Something I'd like to expand on is that there are some ideas conveyed through comics that some cartoonists may choose to portray a message that depending on how much of the message they want to get across.

It's not unusual for cartoonists across different continents to express similar sentiments since they display universal themes.  One of the hallmarks of a good author is how effective they are in stealing other's ideas and passing it off as their own.  If they're good at it, they won't be called out on their plagiarism until they're dead.  If they're especially good, posthumous criticism won't deter their fans from enjoying their work at all.  "Stealing from one author is plagiarism.  Stealing from multiple is research."  In other circles, you get the rare case where you have the same idea, but expressed in a different way.

There was a Feiffer comic about a man who continued to write harsh criticism of people in power, even as they continued to express their dissatisfaction upon his efforts.  Until one day when the higher-ups decided to change their tactics.  It makes for a somewhat sobering read. 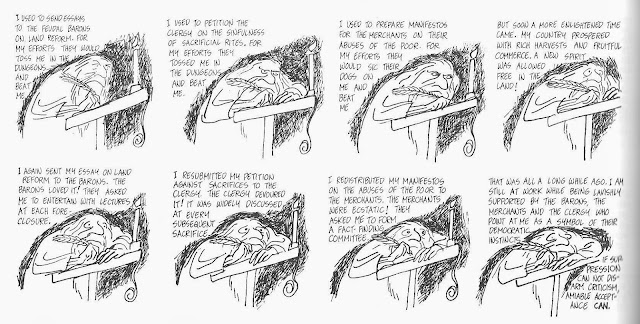 But many people might not want to slog through what would be an intimidating wall of text with static narrative.  So rather, Quino manages to accomplish what Feiffer did with the barest amount of introductory exposition allowed, which results in a more dramatic and enlightening coverage of the same issues. 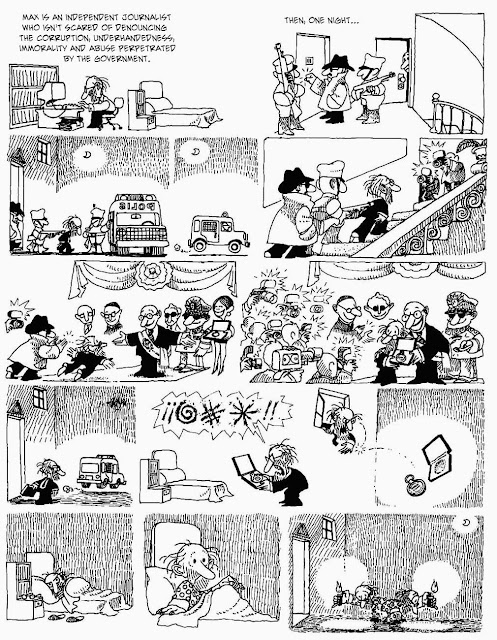 In this Posy comic, the adults talk among themselves about the lessons enforced upon the children on the meaning of animal life and mortality. 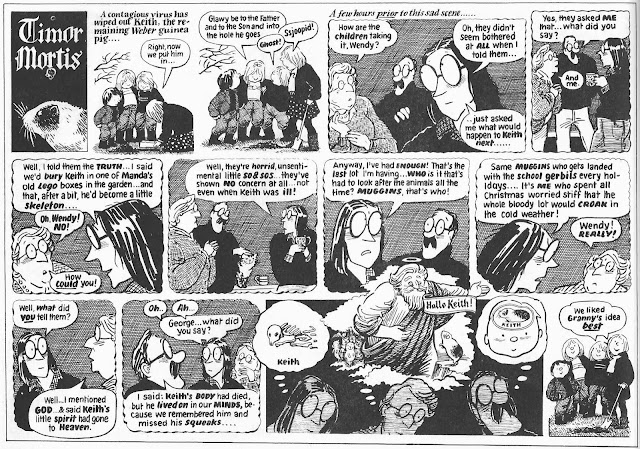 Now compare that with this For Better or for Worse Sunday comic.  There was some discussion about how Grandma's fantastical telling of God painting the leaves individually was somehow less worthy compared to Elly's rational explanation of how nature works.  It reminded me of a line from the novel Life of Pi where the Indian boy dreaded the day where all sense of wonder would be lost to the dry statistical analysis of reality. 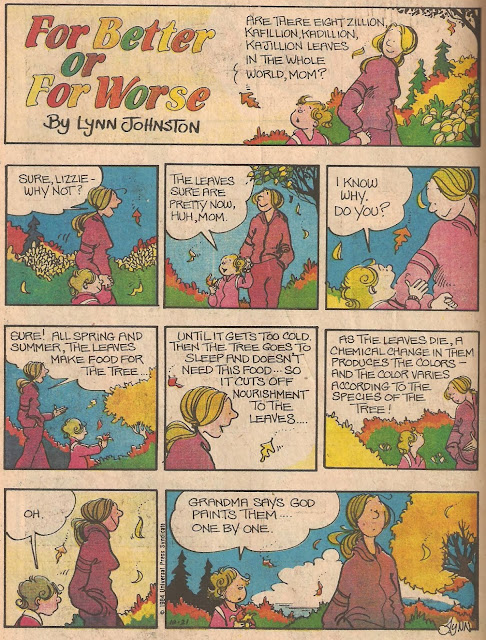 Even though people know that Walt Disney was cremated, they still like to believe in the urban legend that his frozen head is cryogenically frozen beneath Disneyland.  The explosion of Science Fiction has meant that understanding how the universe works has also undermined the exploration of said universe.  There's little to no possibility of Flash Gordon-style adventures happening anytime in the future.  Then again, there's still believers in the Flat Earth Society and Hollow Earth theory, so sudden acceptance of rational thought isn't a possibility anytime soon.

There was a recent news article about how China was attempting to stop people from speeding by having fake police cars along the highway.  Sure, you could go ahead and zoom past an empty police car, but would you want to take the risk?  Naturally, this reminded me of two relevant comics about deterrence through false imagery. 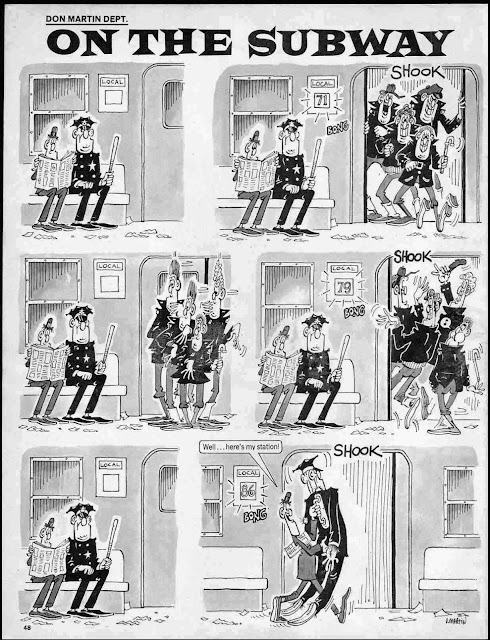 While Don Martin uses fake policemen as a deterrent from punk gangs, Broom Hilda goes in the opposite direction for security. 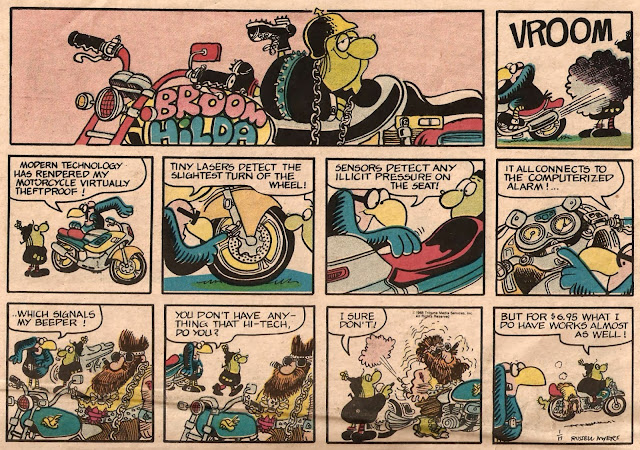 MAD's Al Jaffee is well known for his many contributions to the magazine, especially his MAD fold-ins, MAD inventions and of course, his Snappy Answers to Stupid Questions. 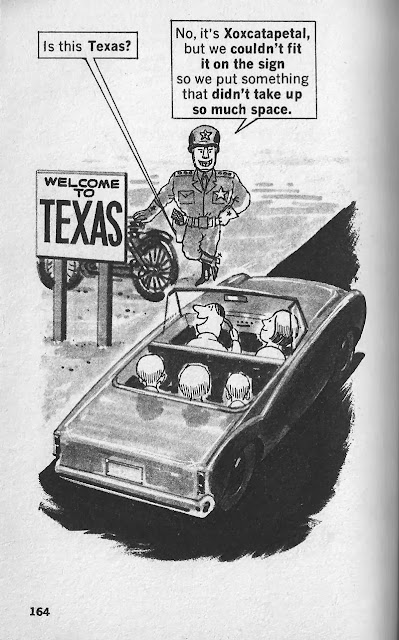 Although Al Jaffee didn't invent the concept of Snappy Answers (it may have originated as early as Foolish Questions by Rube Goldberg), he's strongly associated with the joke.  Near the end of a Comics Journal interview, he mentioned a fan who gave him a typical SATSQ book with all the blank balloons filled in with repetitions of the question itself.

Other than repeating the question back verbatim like a Smartbot, you might be wondering how you could possibly make an already short joke shorter.  Herman found an alternate way with one minor difference - by eliminating the snappy answer entirely.  Rather than the answer, the joke takes the form of the question, since the answer would be completely obvious to anyone. 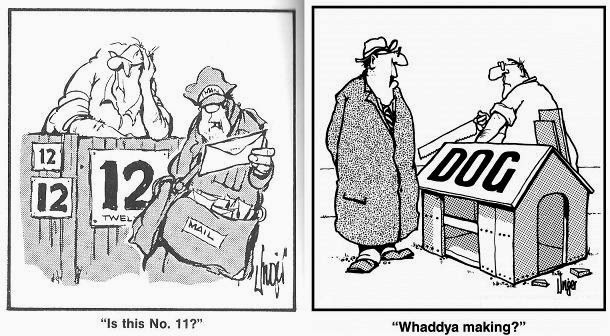