There was a recent Sci-fi article about how Science in recent Science fiction movies tends to be overshadowed in the face of flashy gunfire and explosions.  But it lost points for putting the awful Nicolas Cage movie Knowing on a pedestal, and reminded me of a previous post I made about some of the problems I had with that movie, and the painful recollections I'd rather not have remembered in the first place.  (One of the major problems is that the Nicolas Cage character has no real influence over the natural disaster that's about to happen.  He has as much chance of affecting anything as an ant has against the rising tide.  It's outside his sphere of influence, and all he accomplishes is being there when disaster strikes.)

Rereading that post reminded me that there was another Manga I'd been meaning to talk about.
Some months ago, there was a debut controversial one-shot Manga, Koe no Katachi, about a deaf girl being bullied in middle school.  The editors were concerned about the realism and portrayal of bullying, where they almost wound up not publishing it.

Upon reading it to the end, it's more about the aspects of bullying than displaying actual authenticity in being deaf.  But its inaccuracies for some scenes still feel "off" for me.  Not the technical detail of the hearing aid, which is pretty close to my personal model, but the interpersonal issues themselves.

So far, my biggest issue is the girl's passive forgiving nature, which is pretty much the Japanese norm for the idealistic portrayal of what's considered attractive in a woman.  Somebody who's willing to constantly forgive and suck it up, no matter what happens.  It's also a big part of the Japanese mentality that the group is more important than the individual.  As one of my favorite mangled sayings goes, The hammer that sticks out get nailed in. 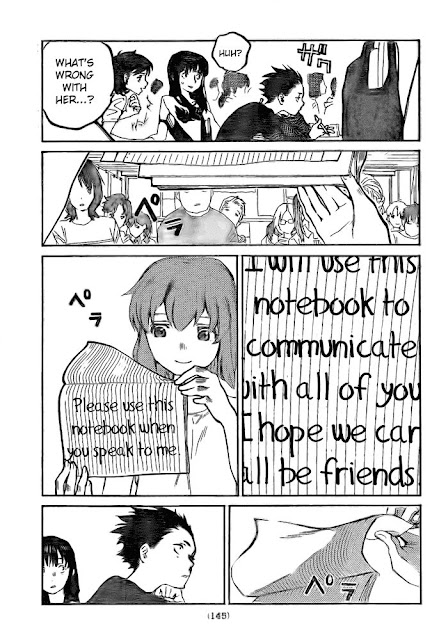 First off, her main mode of communication is to use a wide paper board, much like a children's notebook.  It's a quick visual shorthand to show her talking, but is somewhat inefficient for communication in an age of tablets, cell phones and Blackberries.  Not everybody has pre-painted wooden signs that can be lifted out of hammerspace for easy use.  There are far more efficient ways to communicate, though they would be considered visually distracting or difficult to convey consistently.  (Let alone display an air of innocence) There was a comic, On the Odd Hours which had an unique way of some deaf characters communicating via sign language, but those instances are few and far between.

The class's main problem towards the deaf girl only really begins when she wants to sing at a contest when its clearly obvious that she has no natural talent for singing.  This handicap extends far beyond the simple disability of not hearing things properly.  This isn't the kind of thing that can be overcome by hard work and practice.  Despite all the speech preparation, there are all kinds of slight intonations and pitches that are subtly undetectable to the deaf ear.  My deaf sister has perfect pitch, and even SHE is completely tone deaf.  All the experience in the world won't make up for the fact that our hearing is always going to be slightly "off", and thus are unable to determine our weaknesses when we feel our voices are perfectly fine.  Otherwise, when we talk, we come across as positively normal. 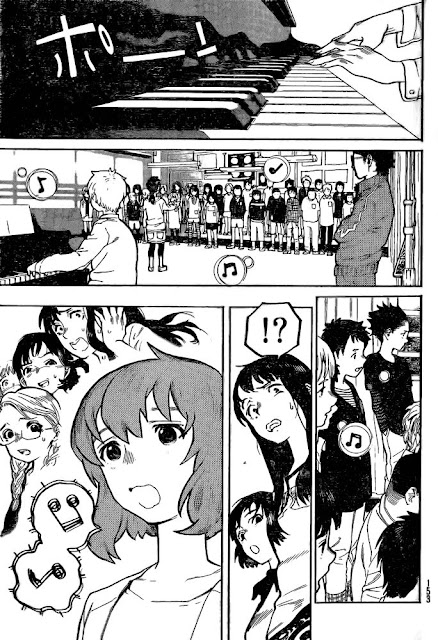 Nowhere during the story does the deaf girl display any comprehension of human speech beyond a few sustained guttural noises that barely resembles human language.  It took me YEARS of intensive training to get to the point where I could make my thoughts sound comprehensible to the average ear.
BeforeIwastaughthowtousepunctuationandtiminginmysentencesmywordswouldsoundlikethisbecauseIhadnoideathatpeoplecouldn'tunderstandanythingIwassayingsinceitsoundedperfectlyclearinmyhead.
I was among the first deaf students to have an oral interpreter present for me during High School.  Prior to that, there were no such programs for Deaf students having extra help beyond some hearing aids and FM systems (which never worked properly enough for me).  At the time, it was considered unusual to allow Oral interpreters to be present during formative years when they're normally available for College or University students, when they're considered to be more valuable use then.  Which is completely backwards, since High School is where our studies start to become serious, and if we have no idea what's going on in class, we're not motivated to pay attention, and are mainly left consulting our guidance books.  While we might've been able to skim our Grade classes using these books, it's not enough, since the teacher will be talking about stuff not available in the textbooks.  Otherwise, we could all have encyclopedias dumped in our laps and not bother going to school in the first place.  (Wikipedia notwithstanding) 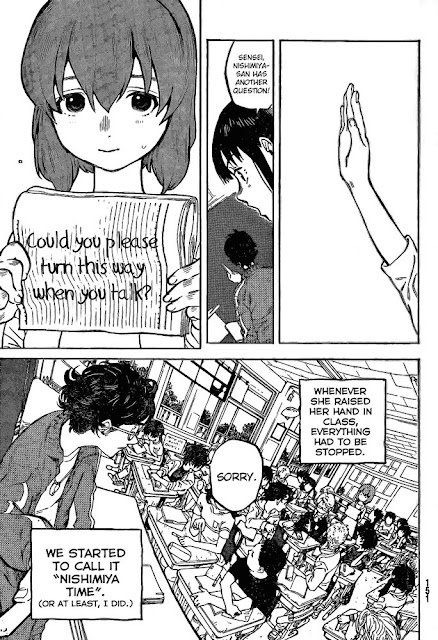 An interpreter would also solve some of the problematic aspects of class, such as demanding that the teacher constantly face forward when talking, repeating what was said to catch what was missed, and having snippets of dialogue going on around the room.  You'd be surprised at what you don't know when you're intensely focused in one specific direction. 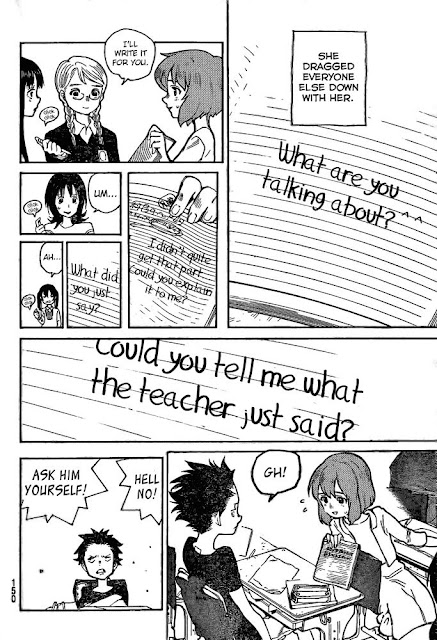 My mother fought long and hard to ensure that I would have an interpreter present during my secondary education.  However, the school continuously opposed her on the grounds that there was "no money in the budget".  When it comes to not wanting to pay extra fees, that's their most reliant excuse.  However, she kept her dignity and cool throughout, always maintaining a degree of respect, even as she was silent screaming inside.  Eventually, after repeat selling and prompting, the school relented, but would only pay for half of the classes in the first year.  This meant that the higher cognitive classes, such as English, Math and Science would have an interpreter, while lesser important classes such as Gym, Drama and Art would not.

In the end, my mother was vindicated when the teachers in the classes where I had an interpreter commented on my participation and remarkable sense of humour, while the classes which were interpreter-free noticed how sullen and uncooperative I was.

To this day, my mother continues to fight for interpreter funding and is a consultant for Orally deaf.
The One-shot was daring enough that it was decided that it would become serialized, but in light of these portrayals giving an accurate representation of an actual deaf person, I'm not holding my breath. 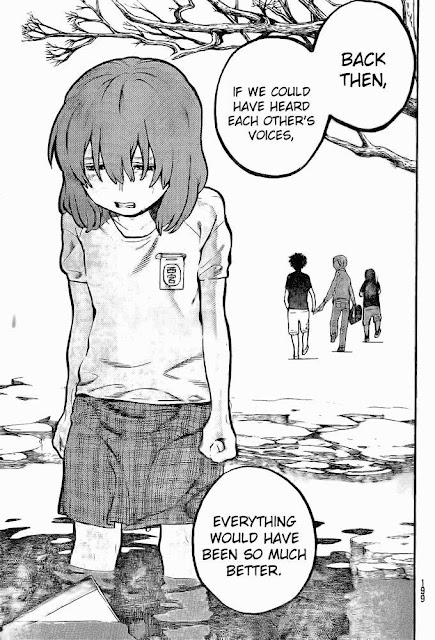 Language is everything.  If there's no easy communication between two people, there can't be any open dialogue.
Posted by DeBT at 1:17 PM