In the 4th volume of BellyButtons, which is a cruel highschool single panel comic, the tale of intimidation and bullying of Butt Monkey beanpole Karine, there's a brief uplifting moment when she comes upon an albino musician who composes a song based on his first impressions.  However, this poignant scene is put off by some weird editing choices. 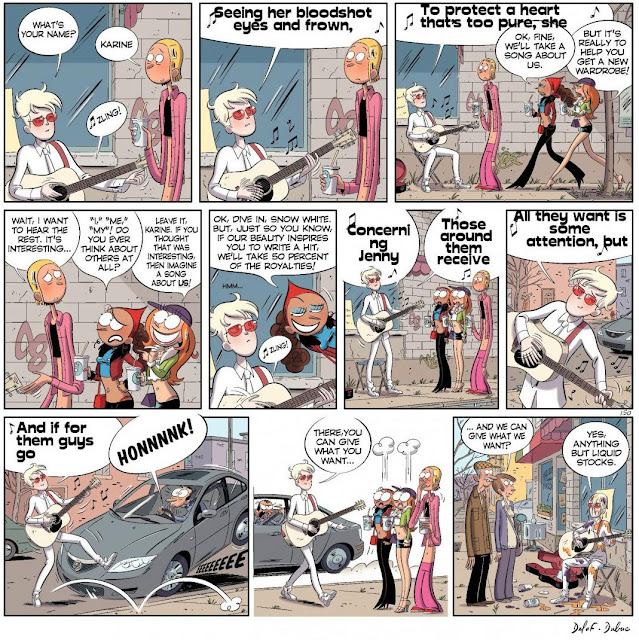 In addition to the musical font being larger than usual, some of the text seems to be missing, including the name of Karine's other "friend", Vicky in the musical interlude.  Mostly what makes this stand out is that his song doesn't seem to rhyme properly.  Otherwise, his synchronicity with the passing car would be far more impressive.

Something I've found while doing various Garfield edits on paintshop is that when I deal with large batches of varying fonts, the text can have varying accounts of spacing between words.  However, if the text size is increased too much, the extended sentence is left hiding inside the margins, away from prying eyes until either a smaller font is chosen or the margins are increased.  I suspect that's what's happened in this case.
If this was the only time it showed up, I wouldn't pay much heed.  But it shows up again later, and is most noticeable when at her lowest emotional ebb in the series so far, having been framed for a crime she didn't commit, Karine notes her thoughts and feelings in her diary, all of which are painfully left incomplete.
How could the Cinebook editors possibly miss this oversight? 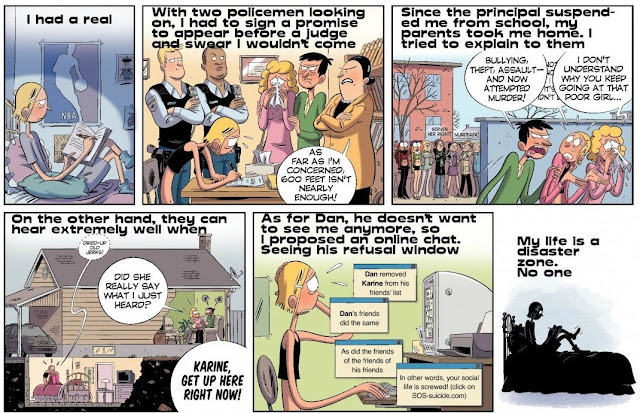 For most of these, I'm left wracking my brain trying to figure out how these sentences could've ended.  Without the French album in hand, I can only guess at the following:

Panel 1. bad day today.
Panel 2. near Melanie again.
Panel 3. what happened.
Panel 4. I'm grumbling to myself.
Panel 5. made me feel even worse.
Panel 6. understands me.

The perplexing thing is that the lyrics for the song in the first page above is reproduced in full in a later scene when she meets Albin the Albino again.  And then it reverts back to its bad habit of ramping up the volume to levels where it's impossible to make out the words.  Usually when I'm missing the odd word here and there, I can fill in the blanks with some helpful hints or consonants, but there's none of that here.  Fortunately, a scanlation of the 5th album helps complete a lyric that I would've figured out anyways: 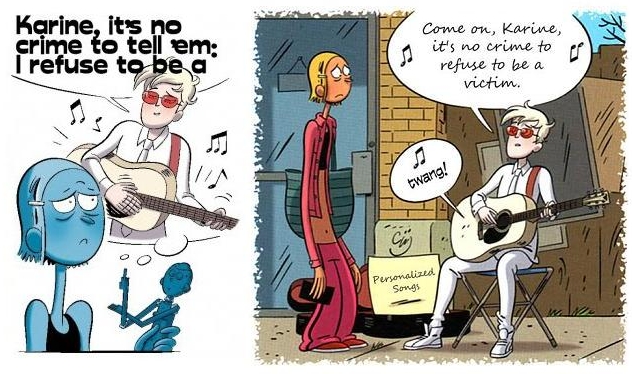