August Enough for You? 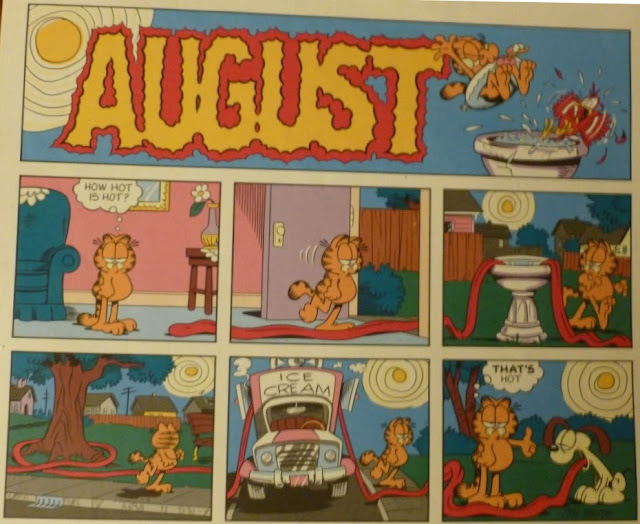 Sorry for the slight delay for this month's Garfields.  It's hard to think of a proper pun that'll fit the name of a month every time that'll fit the context of the comics in question.  Fortunately we've got something that'll slightly fit the tone and theme of the month in question, even if we have to force it into a pun that almost kind of works.

For the most part, the blame for this slipshod scheduling falls squarely on my shoulders.  I've been over-indulging myself on leisure activities in order to relieve myself from the perceived stressful situations I'm currently in, and plumb forgot to update yesterday because I was more concerned about finishing a DVD that was due, and I kept putting off putting commentary for the Garfield comics because I figured I could whip something up in a hurry.  By the time I figured out what time it was, it was already midnight.  I could simply just post the images first and then add commentary later, but even on a rush order, I'm something of a perfectionist, and will struggle to find the right word that'll fit the sentence I'm searching for.
The party theme for this month is probably the most sadistic one so far, bordering on psychological warfare.


The Threaten-to-Have-a-Party Party
Here's a great way to have a cruel laugh at somebody else's expense.  Take party paraphernalia to a library and act as though you are about to cut loose with a wild bash at any second.  The beauty of this party is that there is nothing they can do to you because you are doing nothing wrong!

The above would surely qualify for a scenario dealing with problem patrons in the library.  While being a librarian is fraught with the stereotype of an elderly lady shushing everybody who dares speak above 15 decibels, latest developments have strived to make the library a friendly area that'll attract members of the community to encourage them to share their favorite reading materials.  Even so, the increase in technology hasn't improved the manner of the occasional weirdo who'll walk through the doors.  One of the most effective tactics I remember involved a flasher who was traumatizing everybody in the vicinity.  Rather than confront him and raise a disturbance, the librarian faced the voyeur and when he showed her his privates, she calmly said: "I've seen better."  The flasher looked embarrassed and left without another word.  This is the kind of thing that won't show up on your finals.

In conclusion, we end with an answer to that immortal riddle: How do you make an Elephant Sandwich?