It's Raining, It's Pouring, My Old Man is Snoring 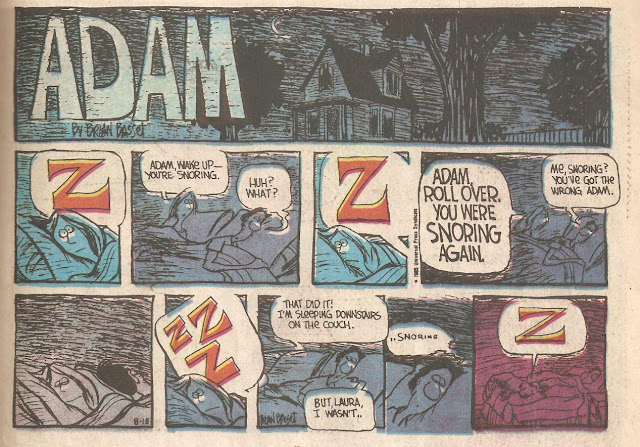 Just recently, my mother had trouble getting to sleep because my Dad was making noises in the middle of the night.  When it comes to sounds, my mother is something of a light sleeper, especially if the offender is outside her bedroom door.  (I've had to stay completely silent when on my late-night excursions when my writing inspiration kicks in)  So you can imagine her frustration when the perpetrator of sound pollution happened to be lying right beside her.  To make matters more infuriating, even after prodding and pushing the offending person to stop the noise, the perpetrator barely took notice of the assault on his person, and promptly stayed asleep, leaving my poor mother feeling more tired and awake than ever..  For her, getting up is easy.  It's staying asleep that's hard.  Oftentimes, she'll spend the night awake dealing with her personal insomnia all on her lonesome.  It's very annoying when you're tired and everybody else seems to have an easier time falling asleep than you.
The next morning, my Mother confronted my Father about this annoying habit, which he honestly admitted to not remembering even happening.  Furthermore, he denied ever indulging in any snoring despite all proof to the contrary.  Even if there'd been a tape recorder handy, it's doubtful that it would've convinced him of his midnight misdemeanors since he would've laughed away such evidence.  To him, he finds these accusations against his person funny.  (More on this later) 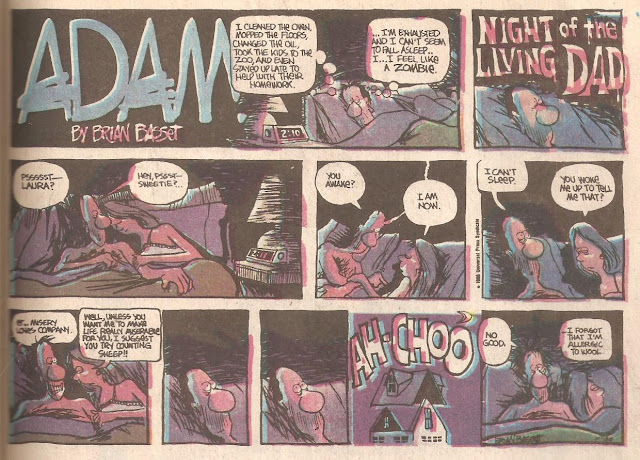 In contrast, my father is the very opposite of this condition, which infuriates my mother to no end.  He can fall asleep at the drop of a hat, often without any need for meaningless buildup.  His choice spot for rest and relaxation is where countless men have chosen for their refuge: in front of the television set.

Usually, he'll be watching some awful B-movie with terrible jokes, and he'll be really enjoying himself, when all of a sudden, overcome with a wave of euphoria, he'll suddenly falls asleep sitting up.  Sometimes he'll be eating his supper at the table and then he'll nod off with his head hanging slightly above the plate, with his utensils still in his hands.  Often, he'll sleep sitting up for a good while, while the action continues in front of him unnoticed, and then wake up and then continue watching the program without caring about missing a large chunk of the narrative.
This narcolepsy would be alarming if it occurred anywhere else with frequent happenstance, but it only happens when he comes home and relaxes.  Dad is completely unable to handle movies with too much plot, since he hates trying to figure out what's going on, and when he tries to pay attention from beginning to end, he'll be constantly asking questions such as "who's that guy?" and "why did he do that?" like an annoying member of the audience asking questions throughout the whole theater.
He doesn't really care about catching the whole essentials of the story, and is content to catch little snatches of comprehension here and there.  He'll watch anything that's on TV by jumping right into the middle, while my mother can't stand watching something without a plot synopsis or summary.  This is particularly evident since we're now in an age of multi-episodic TV series plots compared to the episodic episodes of yesteryear.  Trying to jump into a new series by jumping blindly into the second episode loses all the impact if you haven't seen all the buildup outlined in the first episode.  This is why I increasingly prefer to watch TV series on DVD, so I don't have to worry about missing something, especially if in the next episode, it opens up to a rather unorthodox flashback or something, leading me to wonder if I missed something or if I recorded the wrong channel.

I'm a little of both camps, since I'm constantly living in a world where I seem to be missing the script and nobody's bothering to correct my lines.  That's why I've take steps to ensure that all the comic links in my sidebar go straight to the first strip, baring some exceptions, depending on whether it's serial or episodic. It's always good to make a good first impression.

Getting back to the bedside manners, my mother was undergoing some heavy painkillers to deal with some recent dental surgery, and was planning to listen to some relaxing nature sounds on tape to unwind.  It was at this point that dad pointed out that his meditation method was plucking dandelions and mushrooms off the lawn.  When he's outside in his element, being outstanding in his field, he feels totally at ease, and suggested using that method of relaxation for my mother.  Mom understandably wasn't convinced, since she's more likely to participate in Reading than Weeding.
The thing to understand about my dad is, he's not really a sadist - he's a gentle soul who wouldn't hurt a fly.  But he takes great pleasure in the suffering of others.  He finds such tragic comeuppances like Mom's insomnia amusing.  At least when they're not happening to him.  To him, that's the pure essence of comedy.  (To a certain extent, this is true)  The problem is, he's the living embodiment of schadenfreude.  He loves nothing more than to poke fun and tease the members of his family for what he considers to be "silly mistakes" that could be easily avoided.  In a sense, this is pretty much the essence of humour.  What makes it somewhat unbearable is his take on what he perceives as "funny", often verging in the realm of awful puns and bad jokes.
In comparison, the rest of the family tends to go for more sophisicated humour.  When I found out that Mom was going for a dental checkup and going to a party later, I told her to "have as much fun as a root canal".  The problem is, Dad is mostly French, and any mangled metaphors I tell him will be utterly lost on him, since he's unaware of such idiom.  On the one hand, it's good that I don't have to suffer more
On the other hand, it's somewhat of a lost cause not having a potential audience get my jokes. 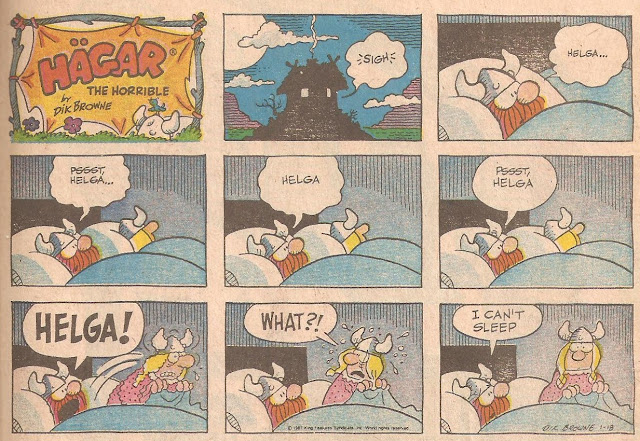 It's raining, it's pouring,
My old man is snoring.
He went to bed
And got bumped on the head
And can't get up no morning.
Posted by DeBT at 9:16 PM