Of all the months, June in particular is the only one most relevant to Garfield, since its the anniversary of when he first started.  It must be nice to have a month all to yourself without having to go through the trouble of having to rename it to the month of Garf like some certain dictators who stole days from February so theirs would be longer.  February haters would be proud. 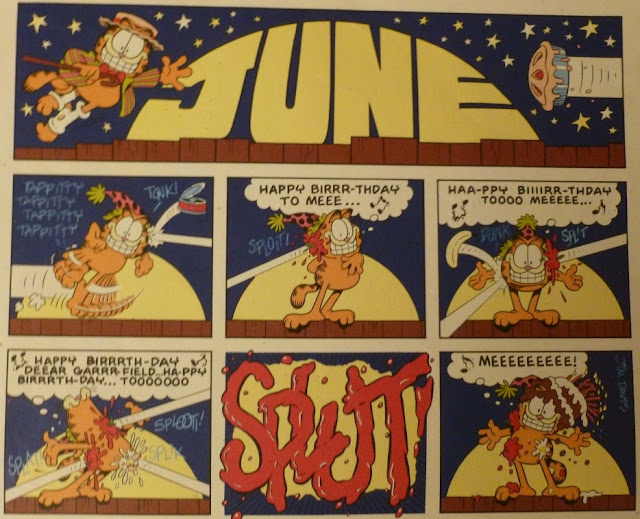 Since it's not an actual celebratory holiday that would infringe on other cultures, Garfield's birthday is the only annual event (apart from Christmas) that can be built up anticipation to its eventual arrival, even as the fat cat has eventually expressed exasperation and regret upon news of essentially becoming the oldest cat alive next to Felix and Heathcliff.  (Peg-Leg Pete doesn't count, even though he's Mickey's foil, since he looks more like a burly dog than a cat)  I created a comic in tribute to this ritualistic birthday, but while looking up comics with the keyword "birthday" in them, I found a spare set of strips which briefly mention Jon's birthday on July 28th.  To no one's surprise, this happens to be Jim Davis' birthday as well.  Two guesses who this cartoonist is meant to represent.

Then for the back cover of the 1989 calendar, Year of the Party has the following description:


For June, the actual month of Garfield's birthday, the Greatest Celebration of All -- featuring Garfield's favorite sport! (Can you guess what it is?)

You know what theme it's going to be, don't you? 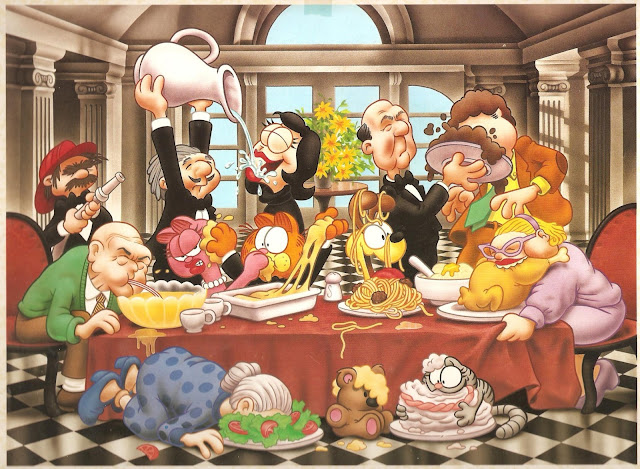 Invite guests with good senses of humor and serve no utensils with the meal!  Good foods to serve at a party of this nature are spaghetti and banana cream pudding.  Oh yes, hold the party in a room that can be hosed down afterward. 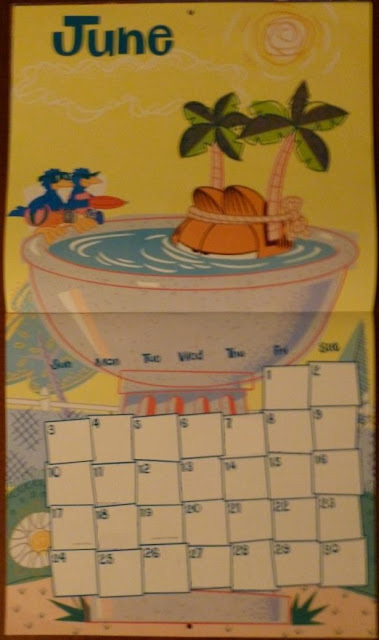 I'm pretty sure we all saw that coming.
Posted by DeBT at 6:18 PM