Back in the early 2000s when Manga began to take enough of a serious handhold of the French market to the point where they became less of a niche publication that grew large enough to dominate a comfortable cliff for themselves on the massive mountain that makes up the BD market did other artists begin to stand up and take notice of this interpretation on their medium that was diverting attention from their usual readers and decided that they wanted in on that action.  (How's that for a run-on sentence?)  This led to several rather embarrassing Euro-Manga projects that were just as hastily cobbled-together attempts at cashing in on the new big thing and were just as bad as some Ani-Comics produced over here.  Fortunately, for every 100 failed attempts, there's at least an exception to the rule.  That answer to Sturgeon's Law found home within the pages of a French anime magazine, Coyote, and was one of the most ambitious interpretations of Anime and Manga; Sentai School.
As you can guess, the school is basically a collection of every genre cliche that could be found within a typical school setting.  What really sells it is the amount of detail packed within each page, which is filled with references to multiple popular Mangas.  There are spoofs ranging from Yu-Gi-Oh! to Great Teacher Onizuka in the first volume alone.  Enough material was done to make up five volumes total.  The main cast (shamelessly ripped from the TVtropes page) from left to right consists of:
1: Toa Girara: The fat guy, Big Eater and accomplished cook. His French name is "Toi" (you). So everytime somebody says "you", he answers "Me?"
2: Keiji Jasper: The effeminate and cute guy. Very gentle, loves animals, real and stuffed, children's cartoons, can do Puppy Eyes and wears a pink jacket. That cute side hides a evil personality called dark Keiji, unlocked via a cursed rubik cube.  When present, he's always in a bad mood and dresses in black.
3: Hongo Wing: The dark and badass guy. He loses his temper very quickly and wears his collars up.  Is also related to his uncle's Villain school across the street.
4: Ken Eraclor: The Hero and coldest one. He hides the fact that he's an unfinished Artificial Human and lives alone with his Robot Dog, Nonos 2 ("Bony 2"), since his builder abandoned him. He's very dense, never smiles, and understands things verbatim.  He's fascinated by mysteries and their solving, and explain solutions while wearing typical Detective Conan glasses. Problem is, Ken is always wrong.  A good reason could be that he mistakes fairy tales books with method ones.
5: Duke: ( Only One Name ) Spoof of Duke Fleed from UFO Robo Grendizer and resembles him physically. The cool guy, he plays the guitar and has a cute pet, Chibi Goldo ("Chibi Grendi", a spoof of Grendizer). 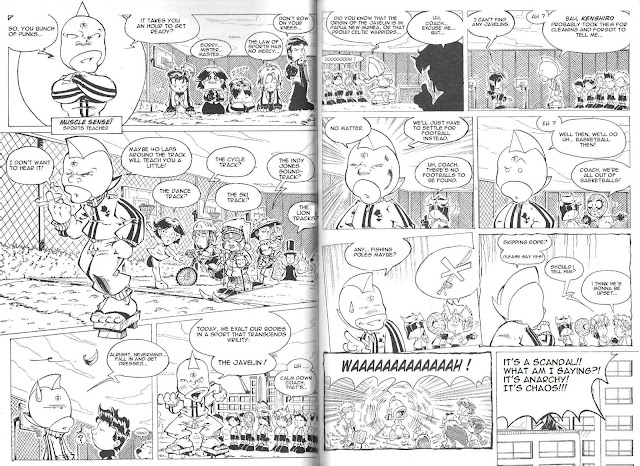 While this is a fairly typical setup for the Superhero school that's emblematic of the X-men, this is a MANGA Superhero school we're talking about here.  As is typical with these things, hardly any valuable teaching time takes place.  Their gym teacher is none other than Kinnikuman  of Ultimate Muscle fame.  In the above scan, Kinnikuman briefly mentions Kenshiro who's none other than the same uber-serious protagonist of Fist of the North Star fame. Only here, he's regulated to being the school janitor, which automatically makes him an Almighty Janitor.  His distinctive face is visible on the Detective Conan cover in the penultimate panel below.
In addition to the chibified versions of popular and old-school Manga veterans, there are also chibified versions of American heroes.  Spider-Man is an exchange student at the school, and there are frequent appearances of a dark cloaked figure named Matt Ban as opposed to a Batman who was an assistant to military aircraft gun turrets during the war.  This Batman expy is touring the halls of Sentai School in order to gather research for his personal Superhero school back home.
For the uninitiated, Judo Boy is a 60's Anime featuring a wandering Kung-Fu like protagonist who is well-known for his stiff stock pose, as seen above.  It's something of a running gag that every time he shows up, he takes up that exact same stance.  Just check out the Anime opening and take a look at the 1:15 mark.  There's all kinds of inside humour involving Anime that was broadcast in France, so some of the subtleties might be lost without some annotations.  For the most part, figuring out some of the 70's character designs is something more of a challenge, while others are easier to find out via reputation alone.  Care to guess who their school doctor is?
Considering the relative obscurity of some of the characters and the potential copyright infringement issues, it's understandable that this hasn't been translated over here.  Amazingly enough, this series hasn't even been scanlated.  This English version present is my attempt at transcribing the interiors via Google, so any mistakes made is on my head.  From these select pages, I've made it seem like that attention is focused more on the Principal, Ultra Sama and his staff rather than the students in a kind of Boston Public way, but they're just as much involved with the relative craziness that generally goes on around the school.  It just happened that the most noteworthy scenes just happened to have them front and center.
In short, it's basically the Manga equivalent of Mini Marvels and Tiny Titans.  The difference being that while those titles summarize up company-wide crossovers to a young audience, Sentai School takes place in an imaginary universe where clashing realities exist together in harmony.  (Love Hina lives across the street from Maison Ikkoku)  In fact, it'd be easier to say that portrayal of romantic comedies just happen to focus on the relationship between people while ignoring the humongous fistfight taking place a few blocks away.  Parodies of different titles that don't interfere with each other is easier than forcing all stories to adhere to a single narrative.  It's all about perspective, I guess.  People are more likely to prioritize their favorite newssites from one topic over another.  Some people prefer to go straight to sports while others prefer to go to politics and financials.  The rest of us go to the Funnies. 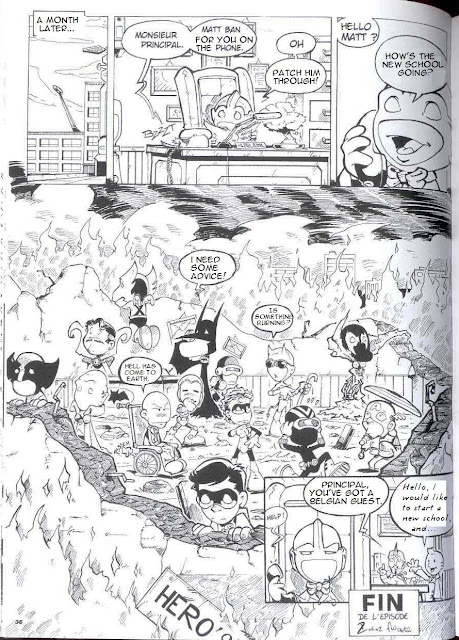 In light of how ultra serious portrayal of American S-heroes with never-ending storylines have become, and how those attempts at reflecting "reality" have overshadowed the lighter funnier stuff, it seems apparent that  Marvel and DC simply aren't interested in producing comics that aren't heavily male-centric with a cynical worldview.  Being unable to immediately duplicate the sales successes of popular comic overseas probably has something to do with it.  Their loss.