There was a recent article about why there aren't as many Canadian S-heroes as compared to American ones.  Obvious exceptions such as Wolverine, Northstar and Deadpool came to mind from Superhero enthusiastics, but as pointed out on a forum, those are more American creations than actual Canadian ones.  Even the Canadian Superteam Alpha Flight is more popular in the States than the country it's supposed to appeal to.  Other than the name of their home location, they display no traits that could be considered essentially "Canadian", save for Wolverine's love of beer.  But that's such a generic cliched interpretation of Canadian ruggedness that it could be considered mildly insulting if culturally insensitive.  Otherwise, it just looks like playing fun against perceived notions of WHAT a Canadian hero might be.  And that's approaching the slippery slope of just what IS Canadian that's such a baffling enigma to wrap around. 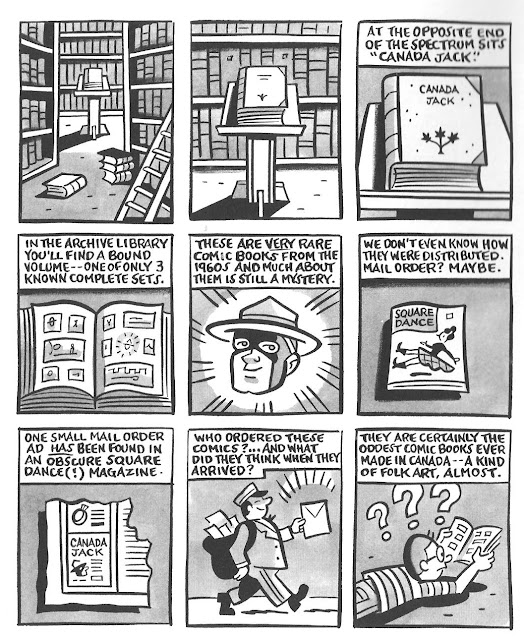 If we're going by easily recognizable iconic traits, that would include Mounties, beavers, moose, Canada geese, the Maple Leaf, Maple syrup, extreme cold, etc.  Popular foodstuff such as poutine and bagels are surprisingly left out.  There are various anthropomorphic interpretations of Canada that show Canada as either the younger weaker brother to the US, or a rugged lumberjack outback.  (Incidentally, I wouldn't mind seeing an anthropomorphic representation of our country from a Canadian perspective similar to Scandinavia and the World and Hetalia)  In terms of cultural identity, it's often said that the United States is the Masculine and Canada is the Femenine.  Rather suitable since the earliest iconic representations were Uncle Sam and Mother Canada. 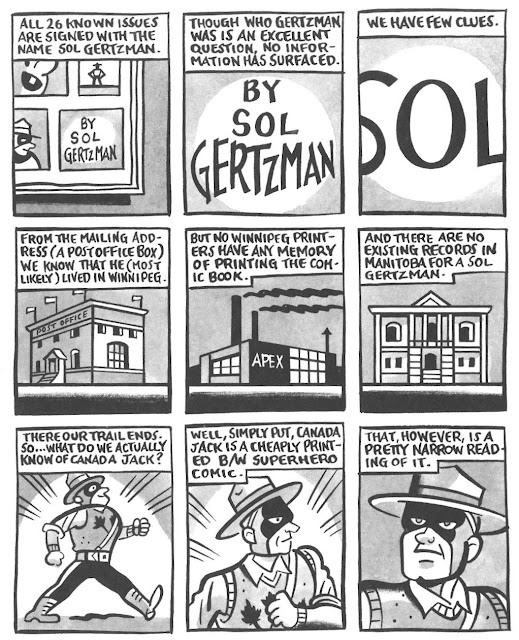 Part of this oversight is that Americans simply have a stranglehold over this genre to the exclusion of all else, that whenever any other country tries to ape their jingoistic patriotic style, they come off as clumsy rip-offs based on long-running archetypes rather than new characters growing up organically.  When that idealism is transferred over, it comes off looking patently ridiculous.  Draping a whole body in the Canadian flag isn't grounds for pride in the same sense that it is for Americans, and is somewhat embarrassing.  While Americans revel in their identity, Canadians tend to be more laid-back, and their identifying notion can be simply summarized up as "Anything that's not American.  And not British either."  The closest equivalent to a jingoist hero wearing their patriotic heart on their sleeve would be the caricature Canada!Man (Jean Chretien) from the satrical pages of AngloMan.  We're probably closer to Australia in terms of identity. 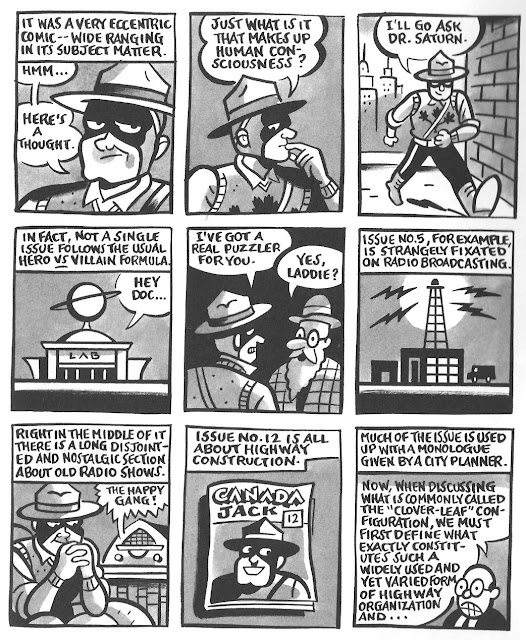 Furthermore, the first Canadian Superhero comics were not exactly what you would call consumer friendly.
They were closer to Indy comics since they were available only in black and white.  Compared to the more attractive colour versions from our southern cousins, we never really stood a chance.  The lack of marketability of our cultural sensibilities basically scared us off.  We simply couldn't compete in that field, so why bother?  The only way to contribute was to join their ever-increasing numbers by joining their comic companies. 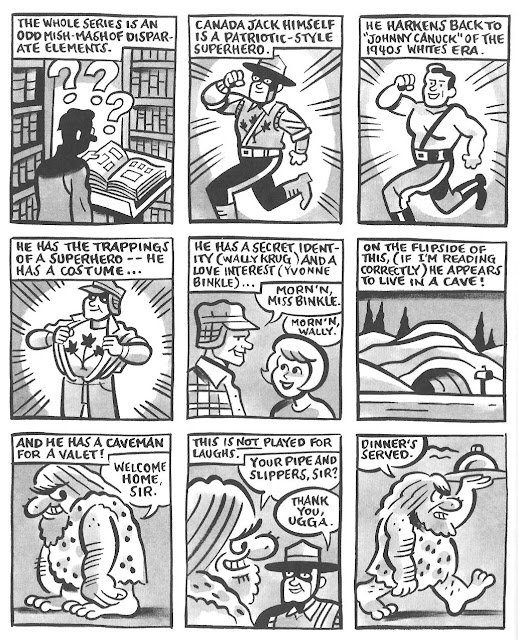 If a Canadian wanted to contribute to the Superhero genre, the only way they could be noticed would be if they contributed to the widely known commercial heroes already populating the magazine racks.  It eventually became a vicious circle of attention and attrition.  Either they attempt their own take which would become overshadowed by the competition in their own country, or they join the ranks of the larger comic companies in public view.  Considering the competition, the results of actual Canadian S-heroes is rather small. 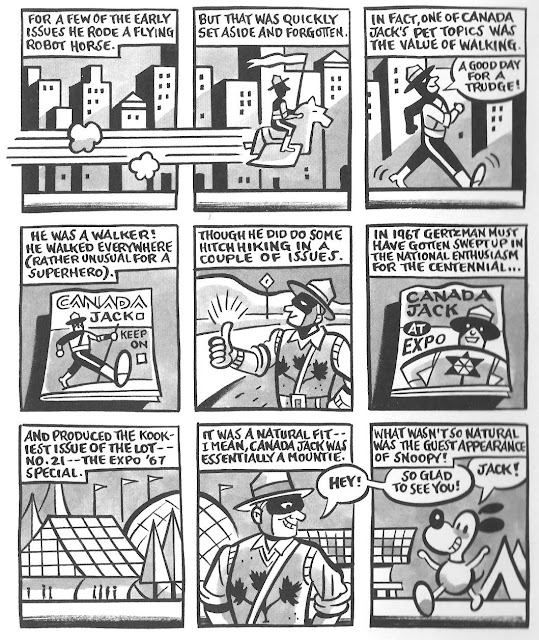 The closest equivalent to actual Canadian heroes is forever emblemed on the Mountie, whose daring deeds done during the Gold Rush, when keeping law and order amongst hundreds of opportunists in a hostile cold climate were the stuff of legend.  S-heroes are basically glorified policemen in colourful garbs, and the Mountie follows that trait perfectly.  This also brings up the question of WHY there aren't more comics based on Mounties?  One possible reason is that the legend of Sam Steele's accounts of keeping law and order during the Gold Rush with nothing but simple graces and never firing his gun while on the job would make the whole concept somewhat unbelievable.  Another is that on the other end of the spectrum is that today's Mounties are responsible for just as much outrageous scandals as they are responsible for remarkable accomplishments.  A better reason is that much like the Zorros and Tarzans and Buck Rogers of the ages, Mounties just fell out of favor when appearances eventually saturated the market.  But maybe after a long hiatus, they're due for a comeback.  I prefer to think of the rambling speech from the pilot episode of Due South where the ineffective Canadian ambassador tells Benson Fraser that their greatest strength comes from being thought as less effective than they really are.  Underestimate us at your own risk. 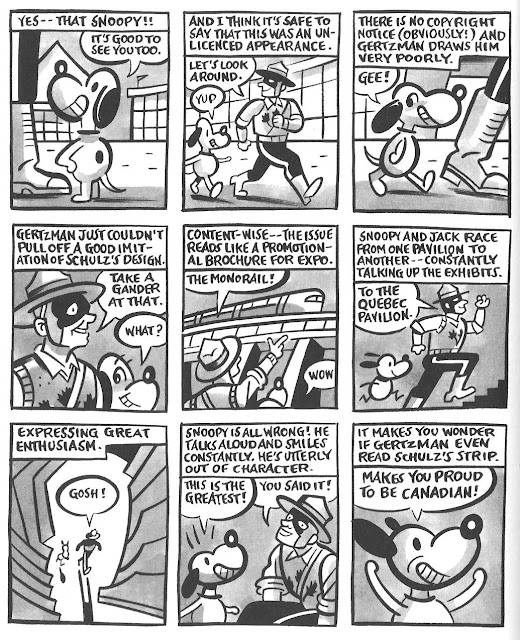 We may be considered a second-rate country compared to the grandeur that's the United States, which proudly proclaims itself as number one in pretty much everything, from the largest cities to the best sandwiches to the biggest monuments, while Canadians are more reserved in their accomplishments.  We may be seen as a second-rate country, but we're going to be the BEST second-rate country out there!  Of course, this brings up the inheirent danger of displaying the traits of the Ugly Canadian, where we proudly dismiss the faults of the United States for their foolishness while overlooking our faults on similar grounds. 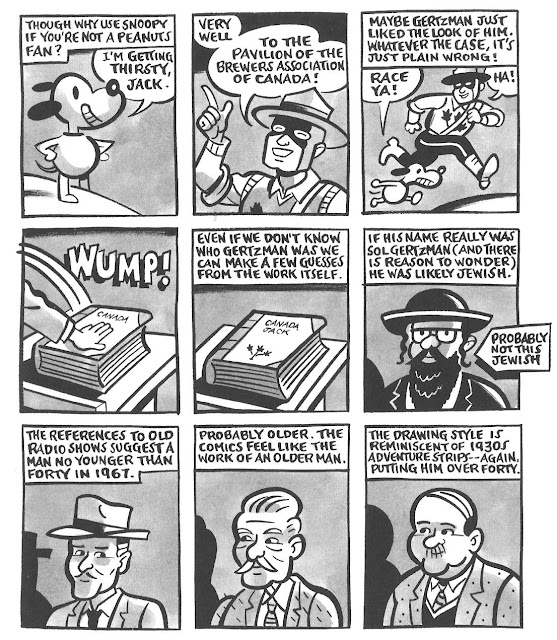 Until the advent of Manga showed that there were alternatives other than superteams relying on shared universes  that'd been built on for decades, the idea of alternate S-heroes that could be popular without relying on the pulp upbringings that made them popular seemed like a pipe dream.  Particularly with the trend of plainclothes heroes who use ordinary household items such as fishing poles, yoyos and even their bare hands in contorted combinations to go on adventures, the same way that a child with imagination will take their favorite toy and run wild with it. 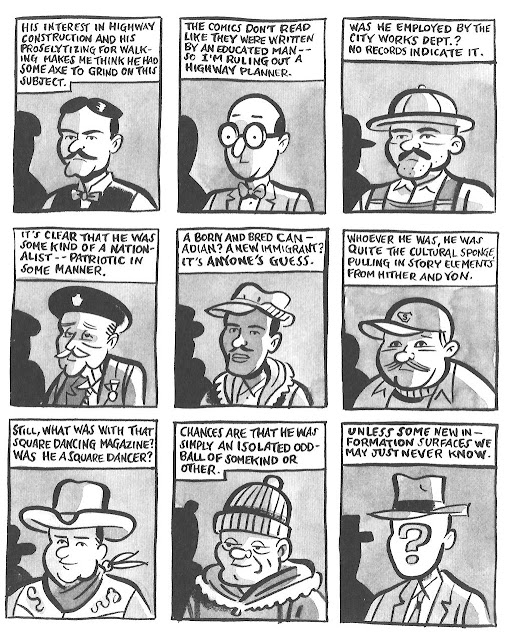 If this post sounds a little rambling, it's because I'm not that fully versed in Superhero comics.  I could've mentioned the creator of Angloman's Northguard, about a Quebec socialist wanting to prevent a hostile conspiracy takeover to combine both Canada and the U.S., but given the obscurity of the subject, I doubt anyone would've known what I was talking about, and their eyes would've glazed over.  Using comics to tackle home topics is pretty typical in repressed dictatorships and open societies.  The only problem is that they can be regionally and subjectively specific, leading to in-jokes that won't make any sense to someone not subscribing a newspaper and getting facts that'll give the plot more sense in context.  These manifestos are not necessary universal truths that can be spread to a world market.  Sometimes they're just highly personal to an extent.

Mostly, I just really wanted an excuse to show the most amusing part of Seth's Great Northern Brotherhood of Canadian Cartoonists.  (The G.N.B. Double-C for short)  It's a comprehensive look at Canadian cartoonists and their lesser-known works.  For those of you hoping to see more pages of the elusive Canada Jack, you're going to be disappointed.  The actual Canada Jack was closer in theme to Johnny Canuck, and unlike his counterpart who tended to go about in his usual flying ace wardrobe or barechested, Canada Jack wore a Maple Leaf logo on his shirt.
Posted by DeBT at 10:09 PM