A few days ago while browsing a second-hand gaming shop that was selling a bunch of Nintendo Power magazines, I was hoping to find either the earliest or last issues, when buried within the promotional material, I came across an amazing find that had me hyperventilating in a gasping reaction that must've sucked out all the oxygen out of the room.  I found a bunch of old Gazette Comics for sale. 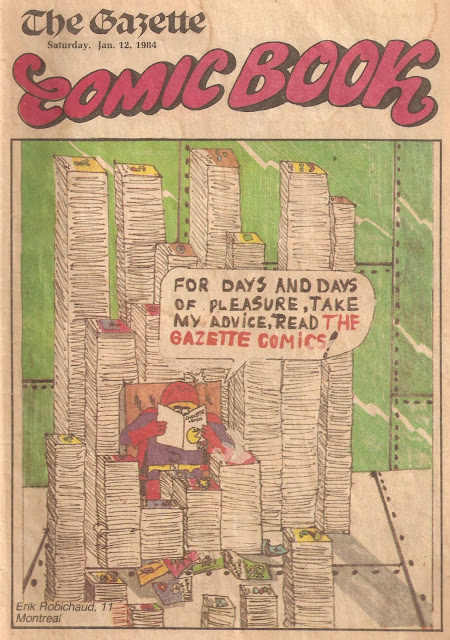 I'd had dreams where I was scavenging somebody's basement or bargain bins and finding the very newspaper comics I'd been yearning to find more of all my life, and always woke up depressed once I found out the reality.  Faced with this find, I forced myself to calm down and test myself to make sure I wasn't dreaming.  Once I made sure this wasn't an elaborately designed fantasy, I went to work sorting through the comics to check for any duplicates I already had, keeping a wary eye on my growing pile to make sure no one would dare snatch my valuable prize away from me when I wasn't looking.  (Not that anybody seemed interested in what I was doing anyways)
I'd given up any hope of ever finding any more of these valuable treasures, especially at this late date, so seeing these old familiar comics was nothing short of stumbling into a secondhand clothing store and finding an old family heirloom. 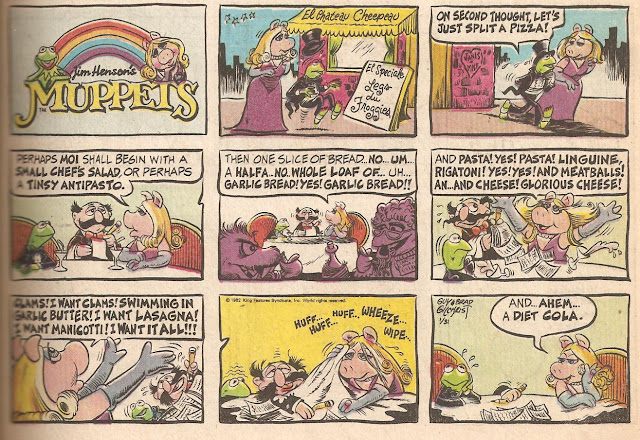 I was so excited that when I paid at the register, I didn't even bother to count my change.  That might not seem much to you, but it was a major defining moment in my life.  The whole trip home, I kept envisioning images of horrendous disasters happening to me, which would've surely spoiled these newfound treasures and all my attempts at sharing these comics would go to naught.  As is the case for the curse of paranoiacs, nothing bad happened to me along the way.  Not even a hint of a sudden downpour or a car driving dangerously in my blind spot.  Obviously the forces that were conspiring against me weren't paying attention that day. 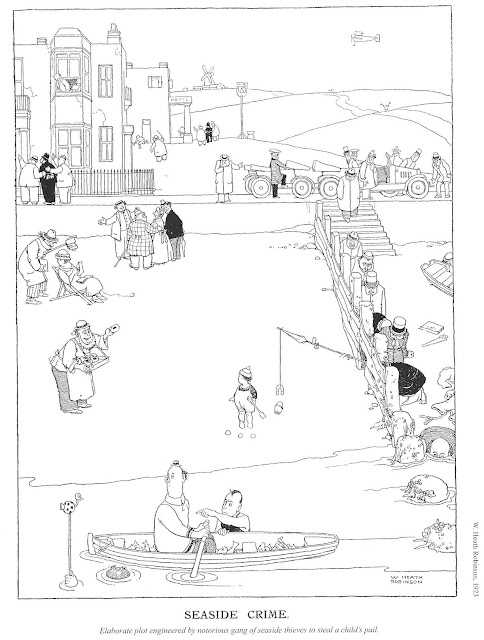 These new old comics predated my current collection, and had a few familiar titles such as Heathcliff and The Lockhorns, as well as some forgettable comics like CatFish and Lolly.  The early Gazette comics also had Jack Kirby's adaption of Disney's Black Hole.  Sadly, many of the prior and subsequent pages are lost, which may be one reason why our mysterious benefactor decided to dump the majority of these comics.  I'm completely missing the entirety of 1981, but since there were adaptions of The Watcher in the Woods, The Last Flight of Noah's Ark, Condorman, and The Devil and Max Devlin, I'm probably not missing much. I'd never really questioned the design of these newspaper Sunday comics, when they were in the exact format of regular comic books.  Only now while browsing these old comics did I realize that it was in conjunction to the Newspaper version of S-hero comics, Spider-Man, Superman and The Incredible Hulk. 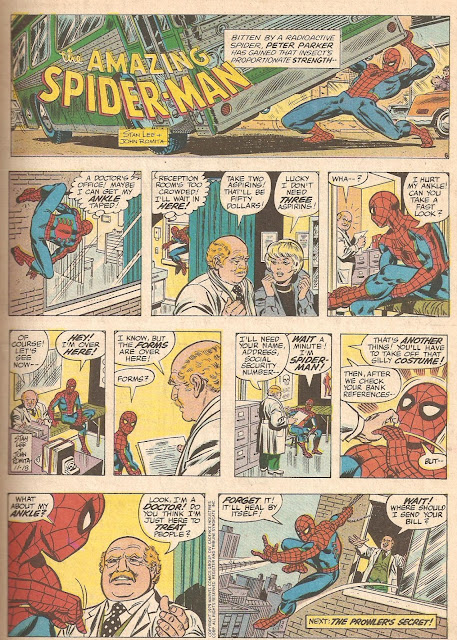 Years later when they moved away from the serious stuff and focused more on childish family-friendly funny material, they changed the content but kept the design until mid-1987 when they reverted back to a more conventional newspaper style.  It was disappointing in more ways than one, because in addition to losing a consistent layout, several comics no longer had the throwaway panels that made the comics such a pleasure to read, and they were packaged in a flimsier format compared to their previous version.  It's also why finding newspaper comics after that date is somewhat of an uphill struggle, because they don't fit the typical size of a regular comic book, and wouldn't be found in a comic bargain bin.

Not that I had much success in finding these there in the first place.  Back when these newspaper comics were plentiful, I once went to a comic shop to see how much an extra copy I had was worth.  The answer was not much.  There wasn't much of a market for these things, especially since they didn't come with a price tag, and were unavailable in a regular collector's market.

Among the newest worthy comics were some more copied Wizard of Id comics... 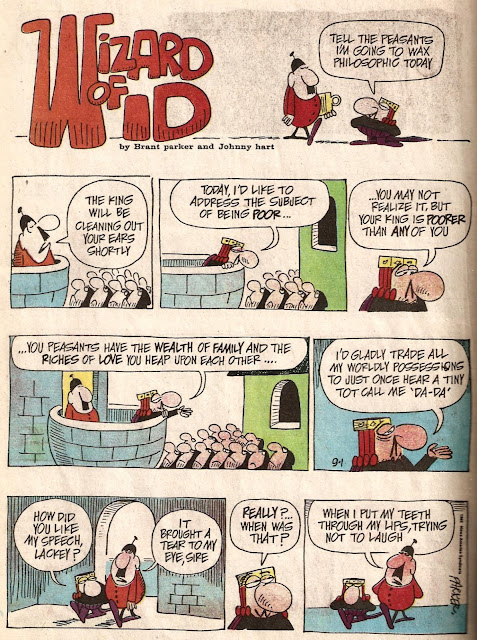 ...and another Hager in his castle... 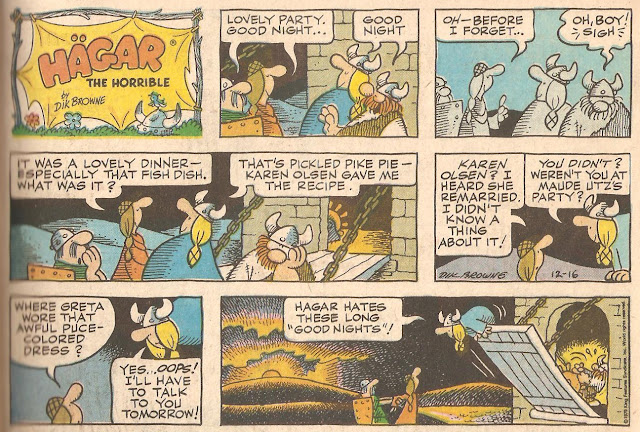 ...and a few Hermans that were missing from the early Sunday collections, particularly one that was present on the cover, but excluded for some reason. 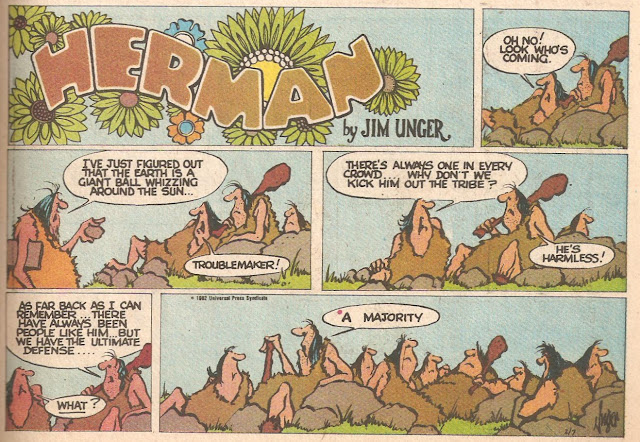 Amazing as it sounds, there were actually past times where I came across Gazette comics that weren't mine, and passed up the chance to acquire them.

The very first time was when I was in Grade school, and noticed a few select comics holed away in a cupboard of the lunch room, along with Johnny Crow's Garden, Snow White and Rose Red, a dinosaur book that was bloody violent, and an insane French comic about a racecar driver being plagued by a rival wanting to sabotage him.  (There might've been a waterfall involved)  Wanting to find these books again was what inspired me to learn how to be a librarian, so I could find comic stuff without embarrassing myself by asking.  (Look in section 741.59 if there isn't a Graphic Novel section.  You're welcome)  If I'd had the selfishness and courage to actually take these comics home with me, I might've saved myself some trauma of "if only" later down the road. 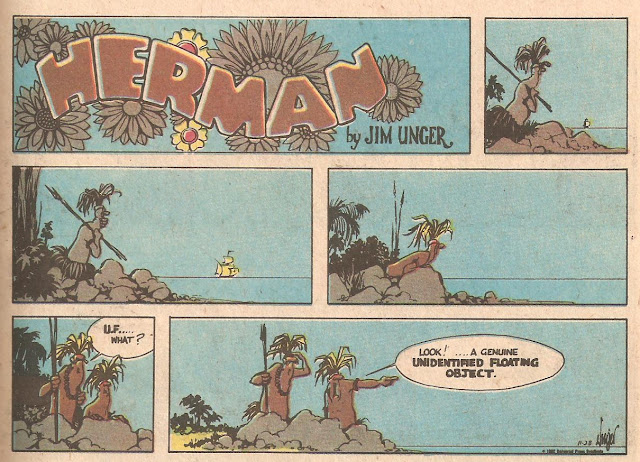 The second time was when I was a garage sale, and actually saw some comics bundled together for sale.  The only thing that stopped me from succumbing to temptation was the fact it was encased in plastic, and the only visible cover was an issue I already had.  I saw no need to purchase a bunch of comics I already had, and was too intimidated to talk to the owner to try to negotiate the price down, so that too was lost to the sands of time.  When I got a similar offer at a comic/card convention years later, this time I didn't hesitate to jump to the bargain, even if it meant buying more issues I already had.

For the third missed attempt, I never actually saw the comics in question, but it was when I came across a worthy second-hand comicbook store that stored not only old European comics, but also acquired new ones at discount rates.  Seeing their impressive collection of old Spirou magazines, I asked by chance if the owner happened to have any old Gazette comics lying around.  Turns out he'd actually HAD the comics I'd wanted, but threw them away two years ago, when he was unable to sell any of his stock.  If only he'd held on a little longer... 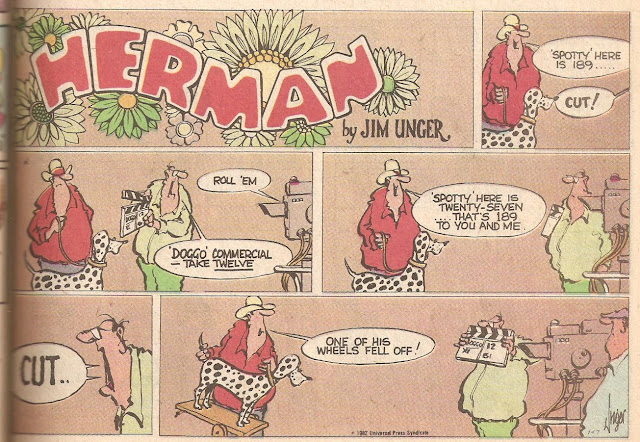 There was another minor point where I passed up another old Gazette comic, but it was in a ratty secondhand comic shop where the back issues were so slipshod and disorganized that they weren't even packed in bargain bins - they were pilled on tables everywhere, with no discernible filling system evident.  It was a real challenge to find anything there, and when I found the item in question, it was so ratty and filled with comics I had no fond recollection of, so I declined to purchase it.  (Besides, the hefty price scared me off)  So finding these comics in excellent condition was nothing short of a miracle.  The old adage of one man's trash being another man's treasure was never truer than that day.

What's especially amazing to me is that even though I hadn't seen these comics in years, I was still able to remember how some of them "sounded" when I re-read them the second time, by only focusing on the pictures and not the combination of image and text.  It certainly reads a lot differently once you understand what the heck's going on.

An added bonus was more of Pat Brady's (Rose is Rose) debut comic, Graves Inc., one of the first comics I ever wrote about, and never thought I would have a follow-up to. 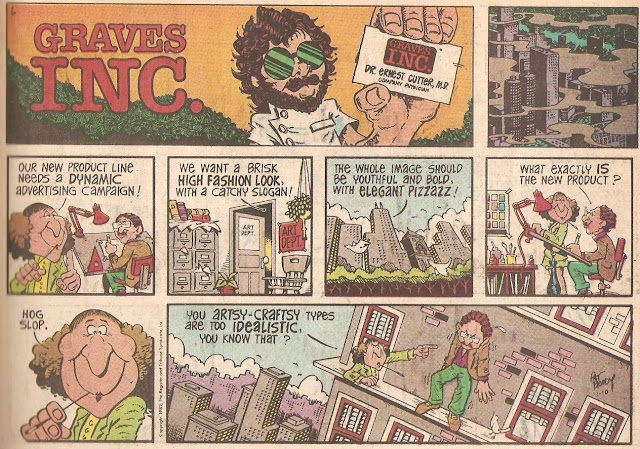 One thing that's apparent - this is obviously not a conductive working environment, and Pat Brady really enjoyed drawing looming buildings.  Below is the largest group shot of the major characters of Graves, though for some reason, Margie the cigarette-holder lady isn't among them.  It's too bad - I would've liked to see one of the women holding up their business cards. 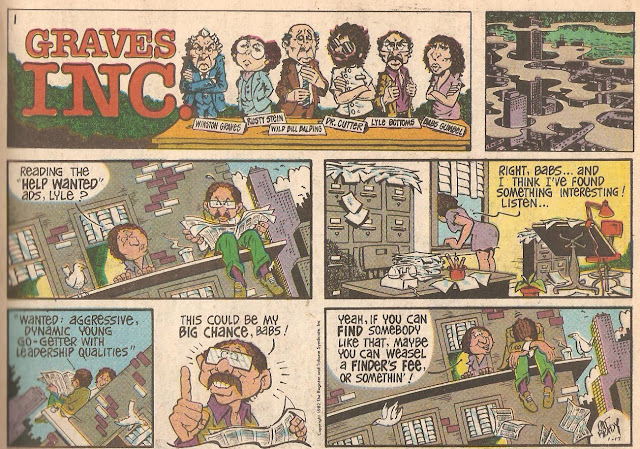 The workers at Graves Inc. are so accustomed to going out on ledges that they've become immune to the terror of heights and falling.  In fact, falling might be considered something of a relief to them. 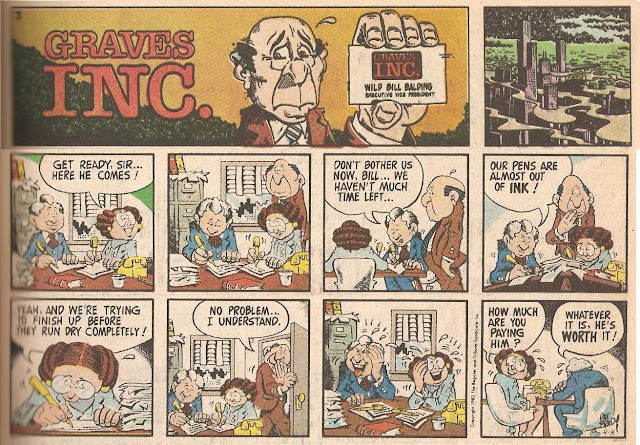 I slightly modified this one to show the Vice President, (he replaced Dr. Cutter, who never appeared in any of the comics I have) who looks visibly nervous, and fits the theme better than the medical doctor did.  From what little I can gleam from this sample here, he's generally clueless about the going-ons in his company and little more than a figurehead. 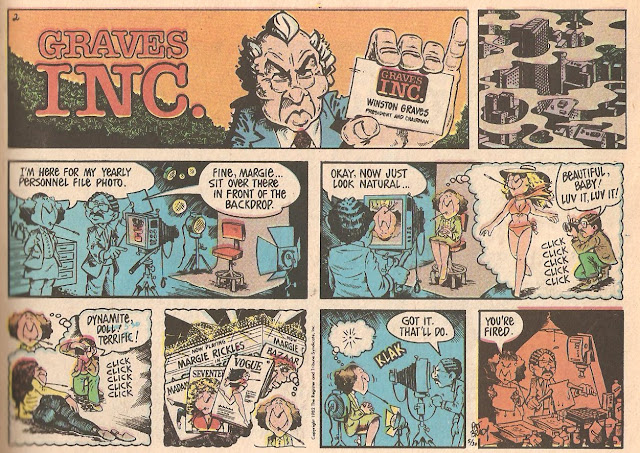 Pat Brady excelled more at showing his character's imaginations, which can be seen from Margie's Illusions of Grandeur here, but the comic still felt more mean-spirited even back in the era of greed, and was eventually replaced by the more easygoing humour of Duffy.

I've saved the best for last.  One of my greatest regrets was that I was missing my personal copy of this particular Sunday as seen here:

When U.S. Acres was brought back to life on a spinoff Garfield link, the image was recoloured to the best of their recollection. 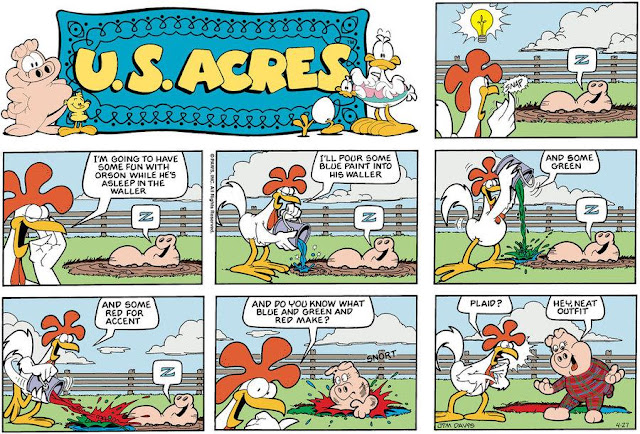 Now, here for the first time in years is the ACTUAL comic as it first appeared, and it's akin to a psychedelic colourist's nightmare. 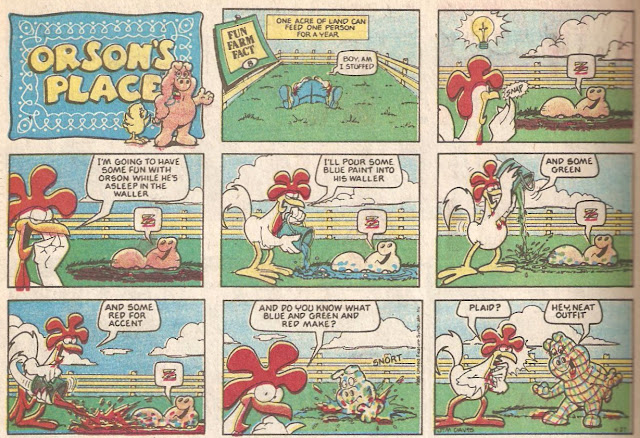 So yeah, the original certainly was quite far-fetched, affecting Orson's entire body.  They certainly did their best to capture what must've been in the original, but they were quite off the mark.
Posted by DeBT at 8:41 PM