The Simpsons may be using their characters to recreate Akira, but they're not the first American attempt to parody the classic Manga.  That feat was accomplished much earlier, back when Marvel still had the license and westernized it in a flipped colourized form.  Nowadays, that kind of practice would be considered sacrilegious, but their production quality was remarkably high considering the amount of detail.  While other properties would've been content to keep colour details to a minimum, reducing crowd scenes to a similar pattern scheme, entire buildings were individualized with tinted windows reflecting the sunlight. 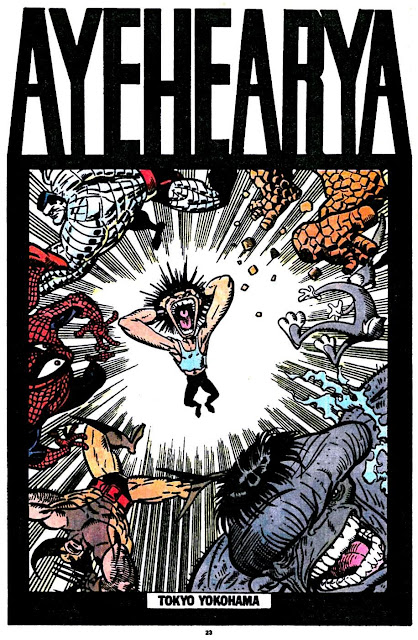 Too bad that level of quality wasn't applied to the parody, which reverted back to its usual colour scheme, which appeared in the pages of Marvel's What The--?! magazine, a comic title that's notoriously difficult to find online, since search engines typically ignore common words.

Following First Comics' Lone Wolf & cub model, the individual Manga chapters of Akira were packaged in a large batch amount (64 pages at a time) allowing for a longer reading experience that would be impossible to appreciate in a shorter format.  Even so, the lack of natural chapter-ending cliffhangers made it notoriously difficult to jump directly into the story, even if you'd started from the beginning.  Not to mention characters didn't bother recapping the plot mid-story made it difficult to follow the breakneck plot.  As a result, recap and character sheet pages were introduced at the beginning of every issue, long before such things became a regular feature in modern-day comics. 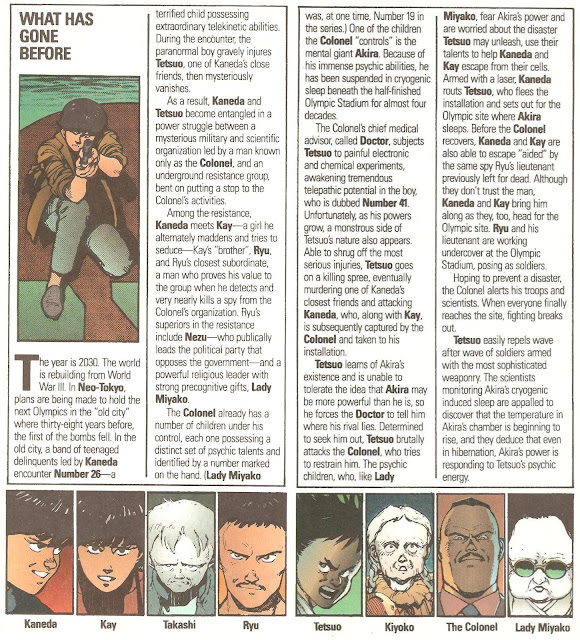 Something I miss is the use of bolded names to make the main characters stand out during the plot description.  Obviously, I never bothered to read these until I'd already had the previous issue in question so I could understand what the heck they were talking about.  The recap page had more text than the main comic itself, but also helped clear up some confusion of what was going on all this time.
Obviously, Manga was still in its infancy when being introduced to an American audience, so it's understandable that the current perception back then would've been somewhat skewed.  In short, don't expect too much of a faithful adaption of the original, but more of a tongue-in-cheek tribute.  (With gratuitously ugly artwork, warts and all) 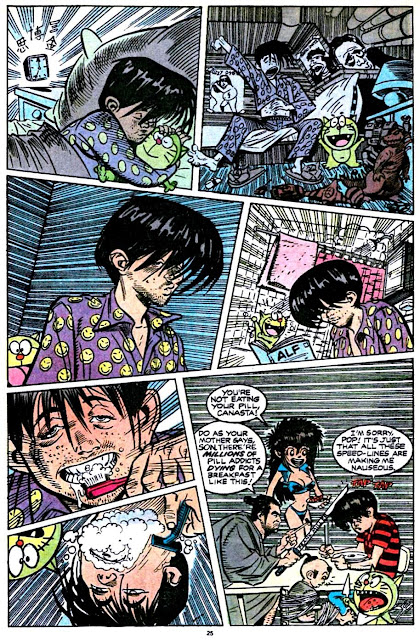 Believe it or not, this is pretty much a faithful rendition of what happens in the first volume of Akira. 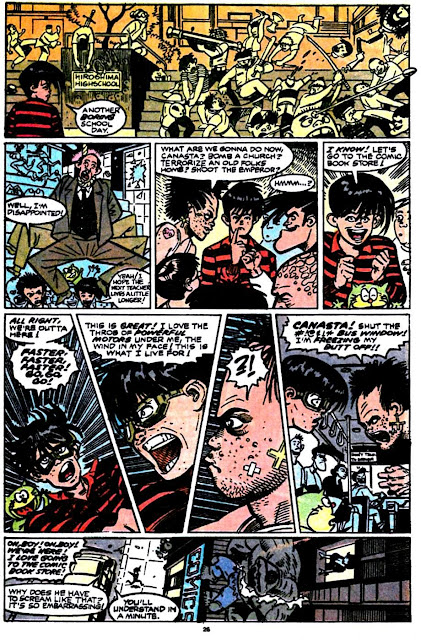 What comes up in the next page is something I'll be going on at length later. 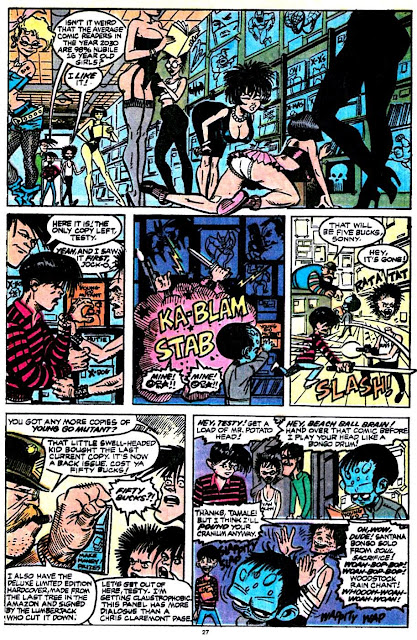 There's something that Oliver Chin of Viz's marketing mentioned in a Going Global article about female customers; "It's funny how adults change their habits as they get older.  Most boys dream about attracting swarms of girls.  Why don't more men (i.e. comic retailers) want to attract female customers?"  The ironic part is that once Manga started becoming popular, men who'd been leering at bikini-clad Superheroines began resenting the new crowd of women intruding their private lairs and expressed open hostility towards the new fanbase for liking the wrong kinds of comics.  That, and  these women weren't model celebrities entering their stores.  Then once SuperHero movies like Thor and The Avengers started gaining a female audience, fanboys started complaining that women were only getting into comics because they were becoming mainstream in their acceptance, and claimed that women were getting interested in their heroes for the wrong reasons.  (As opposed to the right reasons?  What are those?)  There's just no pleasing some people.

Of course, I've only heard about this second-hand.  I've never seen that kind of No Girls Allowed mentality here.  But then, I'm deaf and male, so that might influence my perceptions. 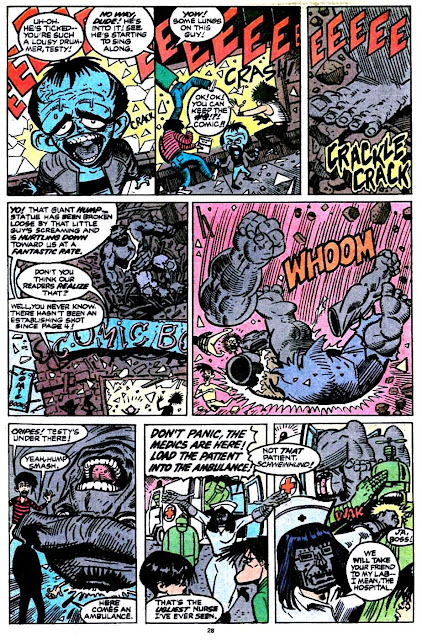 What was extremely striking about Akira (other than the lush Winsor McCay backgrounds) was the fact that the characters with psychic powers didn't needlessly exposition their abilities at every given opportunity.  When I first read it (around the 2nd volume) I kept waiting for someone to explain their perfectly obvious powers, and was amazed that they never got around to it.  I knew what I was seeing, but wanted someone to clarify it for me, which must've been frustrating for comic fans used to having everything spoonfed to them.  Since then, I've grown used to not having clear-cut answers for everything, and enjoy having puzzling scenes that'll reward their deeper meaning upon rereading.

Something else I don't appreciate about modern comics is the constant use of captions to identify the location where the current event is taking place.  Most likely, this practice is influenced by Hollywood scripts where the setting is always in question, when it should be the characters themselves who should provide the clues.  The good guys will be at one consistent spot, while the bad guys will be plotting elsewhere.  It shouldn't be this difficult for the reader to figure things out themselves. 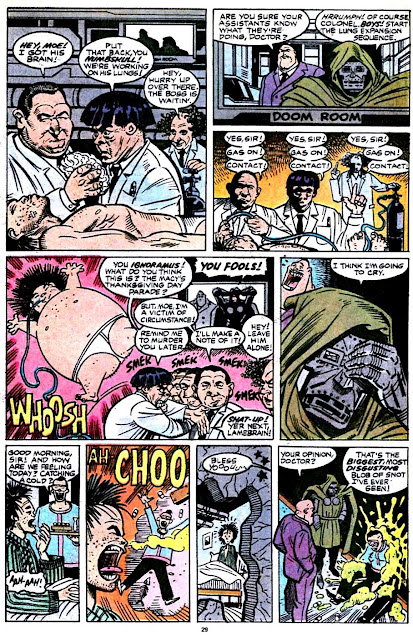 What The--?! was basically Marvel's version of MAD, only with their own pipeline to producing parodies of their existing comic lines, which was how they could afford to have their characters make appearances in these panels.  Also, Doctor DOOM wearing a nurse's dress is somehow more disturbing in written form than in reality. 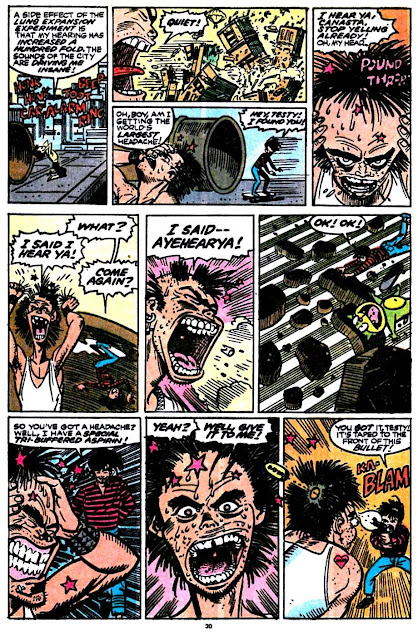 What ruins this parody from being a classic is the ending.  And it's not the lame Akira reveal that does it - it's what comes after.  (The wonky word balloon placement for the last two panels don't help either) 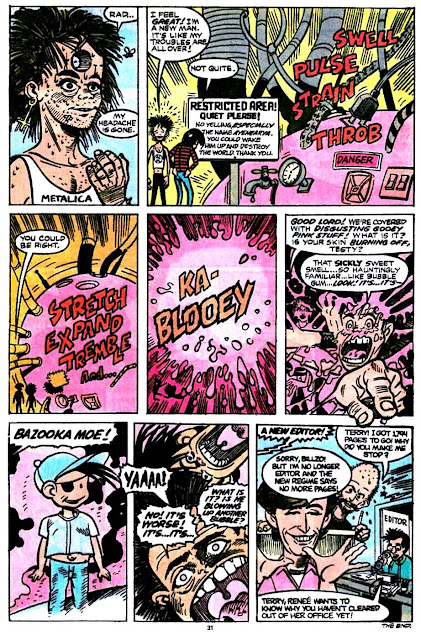 The perplexing final panel was explained on the comments forum of the defunct Scansdaily post these images came from.  In addition to guest stars from Marvel comics, there would also be biting commentary from writers, artists and editors from the Marvel Bullpen inserted in these stories.  The result is just as jarring as what's present here.  There's a busload of in-jokes that I'm not privy to, and I've always been wary of office politics, so I can't help you much here I'm afraid.  At least this should help clear up much of the confusion this conclusion would otherwise portray.
Posted by DeBT at 6:51 PM