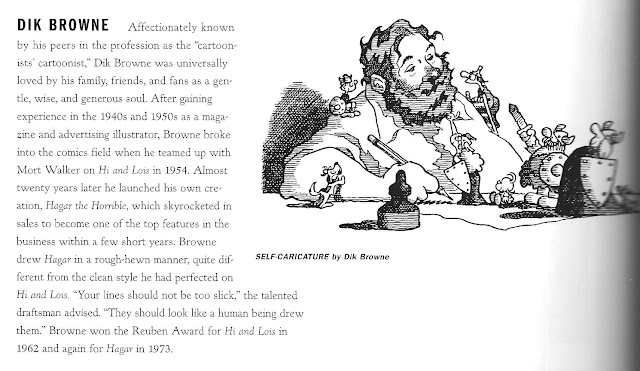 Sorry for the lack of updates.  I've been extremely busy with personal stuff, and haven't been able to devote as much time and energy to writing as I'd like to.  I was just barely able to update my blog for the monthly calendars, which if I didn't fanatically devote fre the beginning of each month, wouldn't be motivated to write anything in the first place.  Somehow during all the rush, I forgot about the anniversary of a certain red-haired fat viking until I saw an Onion article of Dik Brown's son who expected more recognition of the 40-year old comic.  Only then did I remember that I meant to show a personal tribute from Chris Brown who took up the mantle of his father's work, feeling it would serve as a helpful reminder of when he took over.

If this little disclaimer hadn't been made, audiences would be hard-pressed to notice any significant changes, since Hagar's remained a stable character for years, unlike other legacy cartoonists who've been taken over, such as Wizard of Id and Adam, though there was a brief two Sunday comic interval where the Hagar character designs seemed slightly off.  To make up for this glaring oversight, here's the introduction to the Hagar the Horrible animated special.  Apart from a few beer commercials, there's surprisingly very little animated content of a bloodthirsty viking father.