A Knockout From Orbit

I'd like to say that my lack of blog updates is due to personal events infringing upon my life, and that would be partially true, but not as life-threatening as it actually sounds.  Lately, I've been preoccupied with replaying the Zelda Skyward Sword game and sneaking snippets of playtime in between my available free time.  I'm currently playing it on Hero mode, which, as any Zelda affectionado can tell you, is quite the challenge.  Fortunately, just before I gave it back to my sister, I managed to save up a whole bunch of craftable items
Playing the game all over again is at times slightly easier, and slightly harder.  I now know what I need to do, but I have to avoid getting hit three times.  Fortunately, the enemies and puzzles are left defeated and solved, otherwise the whole experience would stink of Nintendo Hard territory.

Also, at times when I have a planned blog topic, but don't have the relevant scans ready, I find it necessary to delve back into my archives to find an alternative placeholder until I have my presentation ready.  Normally, this wouldn't be a problem, but I'm something of an Obsessive-Compulsive personality when it comes to unfinished projects.  I simply find it extremely difficult to concentrate on anything else until I get whatever Sword of Damocles is hanging over my head.  On the one hand, this keeps me from thinking about other stuff because I'm so upset over not having the relevant materials around.  On the other hand, this intense focus helps me keep focused on getting the job done, otherwise, I'd never get my projects off the ground in the first place.

So as a means of apology, it's time to make a mini-contribution to the now sadly-defunct Orbit Project.  (Probably should've saved the available comics while they were still available) 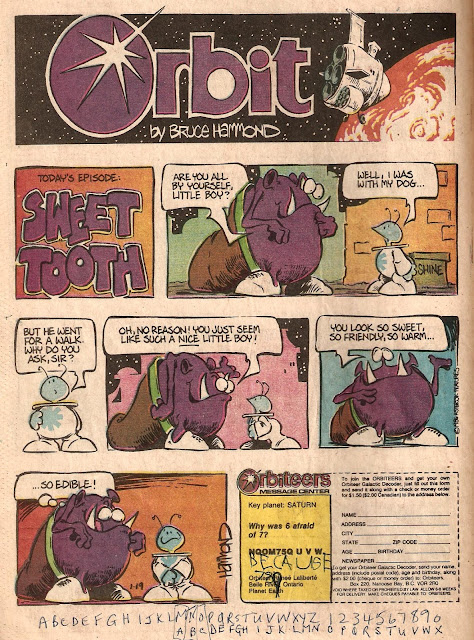 This particular trilogy of strips starts off on a rather innocuous meeting with a rather benign alien.  Of course the old adage "Don't talk to strangers" isn't constantly repeated ad nauseum by overly concerned parents for a reason.  Pay no attention to the scribbles near the bottom.  They're early attempts to decipher the code toe the riddle, which any well-reasoned adult with child logic should be able to solve. 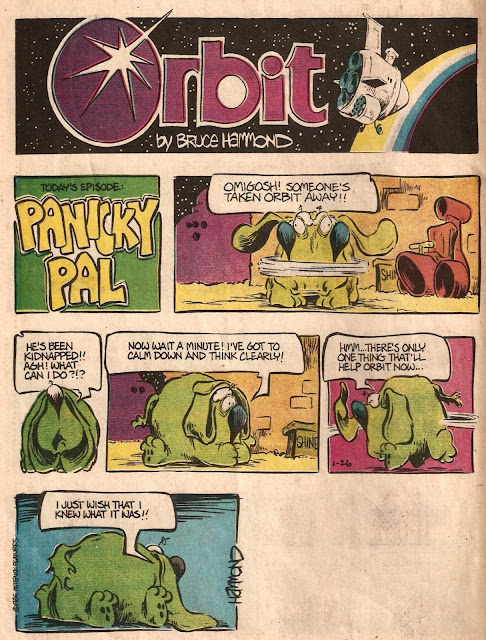 Presumably, there were all kinds of in-between events that took place between the Dailies and the Sunday comics, which should be evident with Tyrone's reasonable panic over Orbit's sudden disappearance.  Pay attention to a certain familiar-looking device in the background... 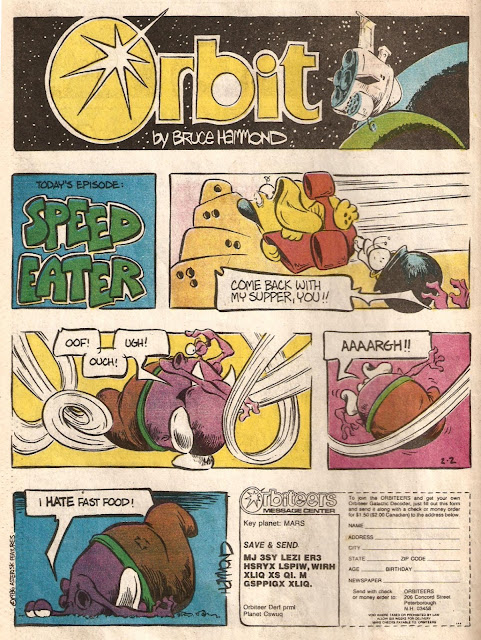 In the end, Tyrone makes an unlikely rescue using Orbit's Christmas Hoverbike.  At times like these, I'm left wracking my brain at how this series of events could've played itself out in between the intervals of the last comic and this one, all leading up to a rather silly pun.  Any contributors out there care to take a guess, or better yet, find the original Orbit comics to help fill in the gap?
Posted by DeBT at 8:51 PM