There's been some rumblings in various sections of the blogosphere about the possible return of TokyoPop, even though it seems mostly limited to digital delivery, OEL Mangas and their last major hit, Hetalia.

As much fond memories as Tokyopop has for making the attractive $10 package possible, let's not forget that their founder, Stuart Levy, has a history of Attention Deficit Disorder when it comes to promoting Manga.  At first, he seemed all up for wanting to deliver what was accurately described as "Film comics", but his constant reliance and kissing up towards the Movie industry (such as his hyping up the currently unfinished Priest Manhwa) began to grate on the nerves of faithful fans.  Before long, their once-powerful company collapsed under its weight of acquiring dozens of B-level Mangas while running out of surefire hit titles and being reduced to Fruits Basket, whose release date between volumes kept being spaced further out to boost sales of their other sagging titles which were all competing with each other as well as the competition.

Rather than hype up the return of Tokyopop, I'd much more appreciate a return to the underappreciated Mangas of the CMX line.  CMX had its fair share of problems, such as a reliance on Mangas that had no Anime tie-ins, and C-level Mangas that felt subpar compared to the competition, which offered much more exciting titles.  Of the wide variety of titles present, only Tenjou Tenge and Gon have been saved from license hell.  One thing I meant to mention a long time ago was that in addition to displaying their early volumes in stiff binding, CMX Mangas seemed to have dozens of little scraps of paper sprinkled throughout the pages, which looked like cigarette confetti.  That was one niggling detail that seemed to escape everybody's collective memories.
As long as we're giving some lip service to the CMX line, I might as well devote some attention to some minor mistakes in the cult favorite, From Eroica with Love.  In The Laughing Cardinals arc, where Klaus boards a plane that happens to be hijacked by terrorists, the following monologue ensues: 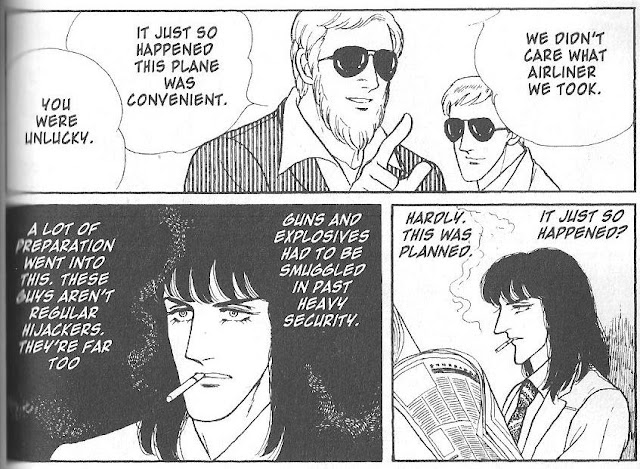 "They're far too" what???  Sophisicated?  Professional??  Prepared???  Classy????  Smarmy?????  Cool??????  Not knowing how the sentence ends gnaws on my brain like a woodland tick in the throes of a termite field.  It doesn't let go that easily.  Another barely noticeable example is in a short story where Lawrence is rattling off a list of the hotel's quality benefits.  If you look closely, there's an extra line nearby the 2nd "It's" there.

Lastly, there's this opening to the 13th volume of the multi-arc of The Seventh Seal that continues from where the 12th volume left off.  At first glance, there doesn't seem to be anything unusual about this page.  The only problem?  The previous volume was the 1st part, and it's erroneously labeled as the 3rd part, when it should clearly be the second. 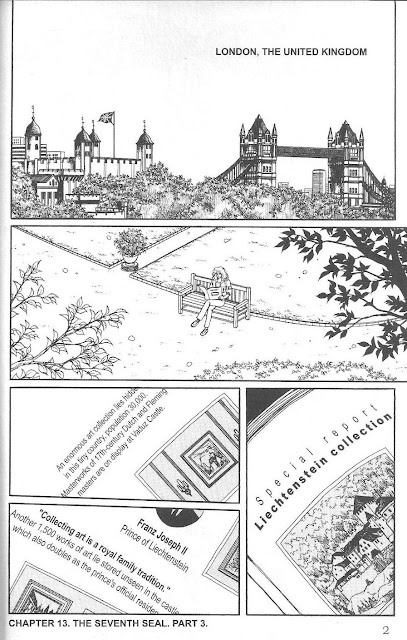 These kinds of detail might get ignored by the majority of people who want to get to the next balloon, but it still bothers me.  Part of why I like having comic images on my computer is so I can do some creative editing to correct the little details that were missed the first time around, or clean up some bubbles or images where there's specks of white or black dots creating visual eyesores that distract me from appreciating the whole page.  I'm funny that way.
Posted by DeBT at 7:34 PM