It's hard to believe, but there was once a time when The Simpsons first debuted that there was concern from parents that Bart Simpson and his dysfunctional family would be seen as a bad influence on children.  Two decades after the legendary show made its debut, it's now no longer seen as shocking, but neither is it as groundbreaking as it once used to be.

Back when Bongo comics released their premier comics of the beloved animated TV show, they did so on the premise that it would take up the story ideas that couldn't be implemented on the show itself.  After various hits and misses, it could be argued that the comics were inspired from the "reject" pile just as often as the show itself.  Even the Halloween Specials don't have the same ring of honesty to it, despite the various warped interpretations of the family.

In January 16, 2000, Bongo briefly branched out into the newspaper world by releasing the Simpsons comic strip; an impressive 3/4 of the newspaper page, taking advantage of the extra space for longer setups and multiple punchlines than other typical comic strips.  However, as is with all media tie-ins, it was gone within a year.  It's just as well - despite starting out promising, it suffered from that cardinal sin of American comics; over-reliance on talking heads in the hope that lengthy speech balloons full of exposition and funny sayings would create humour.  Bill Watterson had the right idea of focusing on dialogue between two characters rather than rely on punchlines that would grow stale within a week. 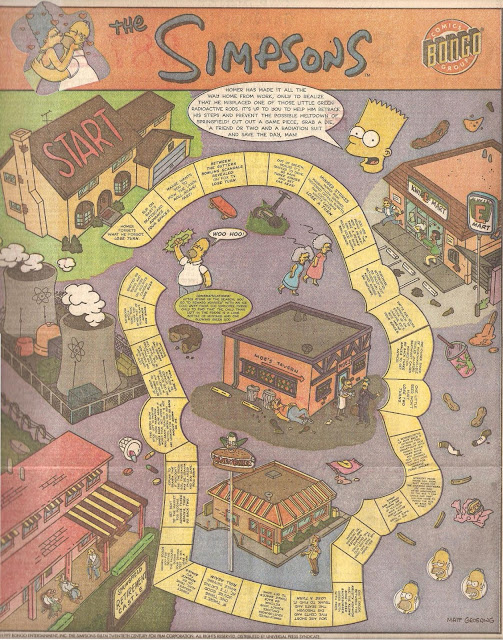 Part of what made the show work was the themes and dialogue between the characters, and that's sadly absent on the printed page where the need to demonstrate as much information within a short time frame as possible.  Around this time, I was beginning to grow less enthusiastic about saving newspaper comics and only bothered to save the comics I figured were worth re-reading.  These are all the ones that I've got so far, save for a rather lame parody of mock movie posters, with Montgomery Burns doing "The Whole Monty".  (You're welcome, BTW)

For some reason, the few available comics found online are only present in black and white, as this (sadly shrunk) Peanuts tribute can testify.  Even though the title heading is in colour, perplexingly enough, the rest of the comic is present in plain black and white.  The Peanuts homage is one of these comics I should've saved at the time, but only the first row was clever enough, and the remainder didn't seem worth the hassle for the extra room. 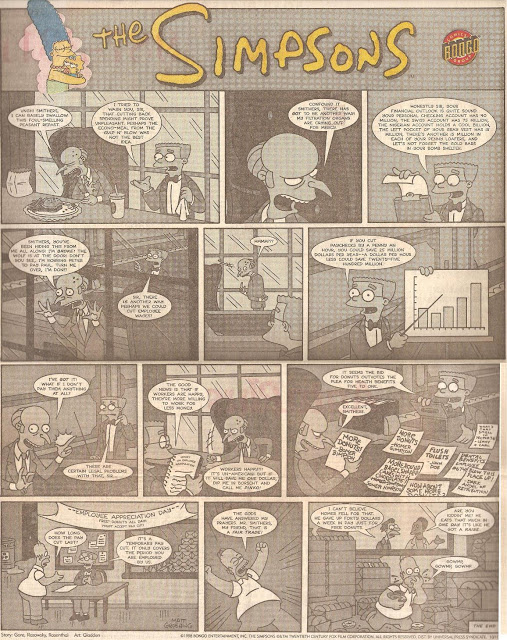 The TV show was helped by a crack team of writers who pooled their efforts and were led by a show runner who helped focus their creative energies towards a specific destination.  So is it any surprise that a comic spinoff would fail to emulate the same high standards as the show?  Not to mention the creative limitations of crafting a story using any of the Simpsons characters within the "unrestricted canvas" of an extra-large Newspaper page.  There are times when having extra space can prove to be a great inspiration, and there are times when having all that extra room can be just as much of a deterrent to creativity. 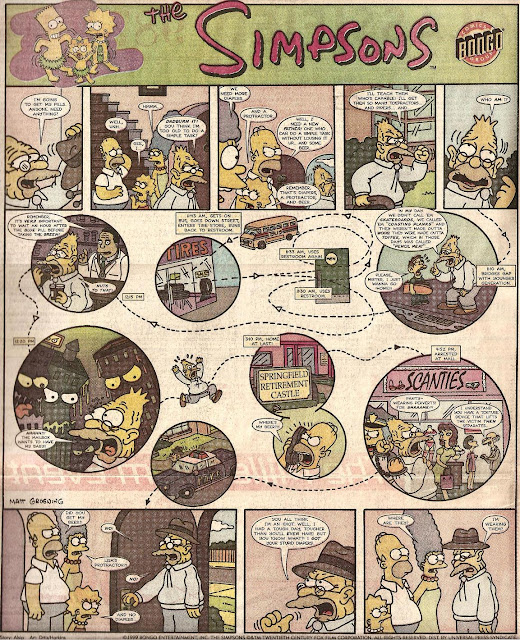 The Simpsons went from a defining media sensation that revolutionized the television industry to a Flanderized version of their former selves.  An impressive account of the rise and fall of The Simpsons can be found on this site which likens the first seven seasons to the "true" Simpsons, and all the other seasons that've happened later to be Zombie Simpsons.  It's probably the most comprehensive history of the show that's not based on the book The Simpsons: An Uncensored, Unauthorized History.  I haven't read any of it, but what I've heard is that most of the show's success comes less from the creator, whose concept was originally based on a rushed drafted version of Matt Groening's family in order to prevent using his character designs from Life in Hell.  There were still instances where the creator didn't quite understand the ramfications of his controversial ideas, such as his insistence that Marge Simpson have rabbit ears underneath her hair.  Sometimes it's the other oddballs of the group effort who wind up making the largest contributions. 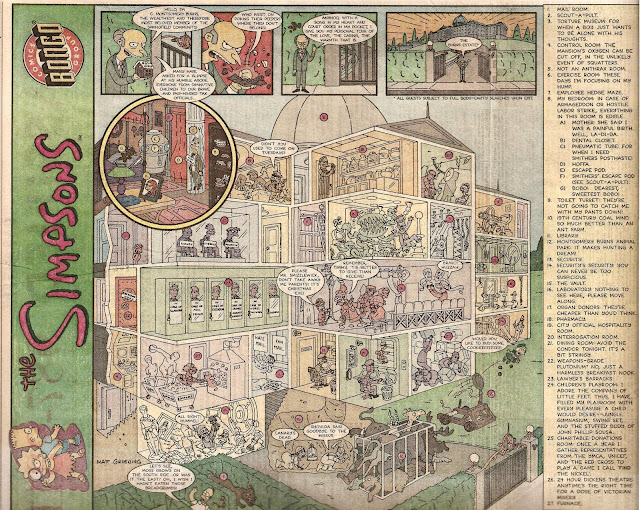 For those who don't have the time to read through the whole fascinating history, here's a brief summary of what led to the show's decay: 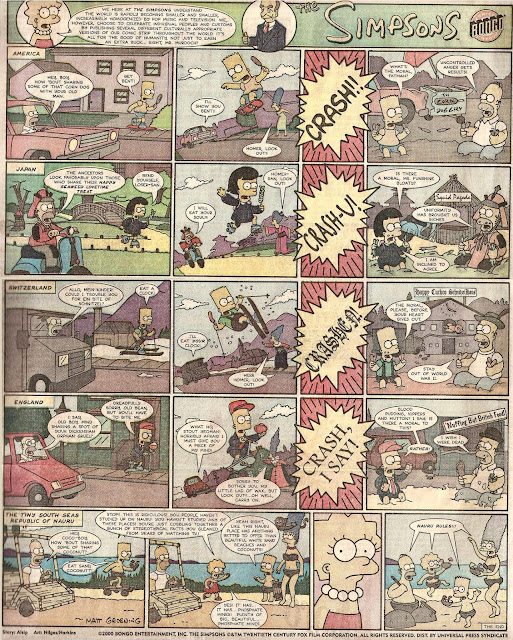 What's surprising is that these comics were planned to be reprinted in a later book in 2004, but that never came to fruition.  The fact that these comics are somewhat lacking in the overall humour department might have something to do with it.