Adventures of "Calvin" and Aaron

Some faithful fans of Calvin and Hobbes were notable disappointed when Bill Watterson announced that there would be no more of his legendary comic strip after a 10-year run.  (Actually, with all the sabbaticals he took, it amounts to a little over 8 1/2 years, but who's counting?)  With the sudden demise of an imaginative strip, syndicates and networks rushed in to fill in the vacancy.  This led to mixed results, ranging from TV shows such as C Bear and Jamal to the very Canadian Stickin' Around.

So when a certain spiky-haired kid made a sudden reappearance in a well-drawn (if overwordy trying-too hard) comic three months later, it came as a welcome surprise.  This has been posted before on a Calvin fansite, but I've never seen it in colour, and sought to correct that oversight. 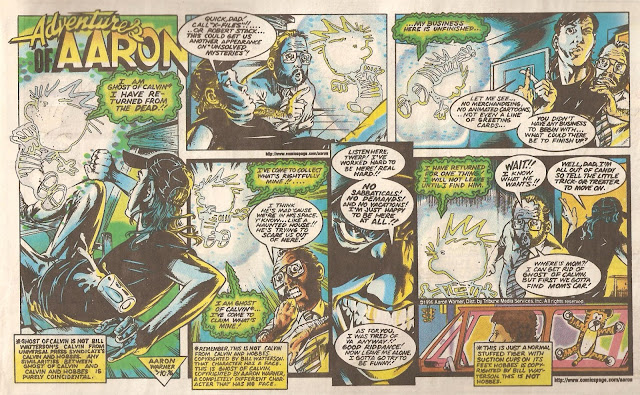 What's less well known is the little sidebar commentary that was present in some newspapers who bothered to splurge on the extra content.

While there's never quite been another Newspaper comic that's captured the imagination of readers everywhere, Naruto could be considered the closest equivalent.  After all, the two do share a certain similarity in spiky hair and rebellious attitude.  However, there's a certain difference in how their mentality is portrayed. 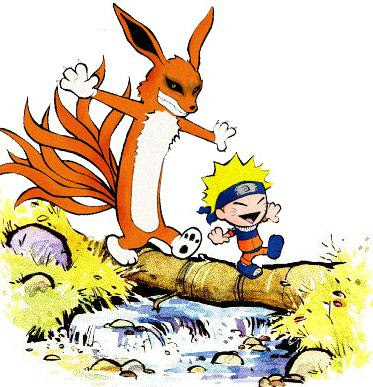 Calvin's practically a dead ringer for many of the symptoms of Asperger's Syndrome.  He's obsessively interested in Dinosaurs to the exclusion of everything else, has a vidid visual imagination, shows little social concern for anyone who isn't an animal, and has more fun on his own than with other people.  Whereas, Naruto has a tendency to act impulsively without thinking, has trouble staying still, doesn't always understand what's being taught to him, and is somewhat hyperactive.

In short, while Calvin appeals to the Autistics inside us, Naruto more likely appeals to the ADHD crowd.  This is certainly reflected in the later storylines where numerous plots are introduced and dropped within a time frame, even as Masashi Kishimoto continued to veer off into various tangents towards his inevitable conclusion.  One can only wonder what the next major media sensation will have signs of.  Synesthesia, maybe?
Posted by DeBT at 9:20 AM