Shortly after I read the Peanuts 1973-1974 collection, I was suddenly inspired to do a homage based on Good Old Gregor Brown in Sikoryak's Masterpiece Comics, where various literary classics were re-interpreted into their closest comic equivalences.  Considering the amount of humor and existential despair in Peanuts comics, it seemed a natural fit for Kafka's absurdist bureaucratic stories conjoined with some of Peanuts' more memorable surreal daily strip runs.

Sadly, that's the only reference that I feel knowledgeable about doing.  If I was more familiar with the contents of the other novels and comics presented in MasterPiece Comics, I would be more confident in producing more works.  Maybe somebody else out there will pick up the slack.

To compensate for the lack of available literary content, here's the opening of Genesis as portrayed by Jean Effel, best known for his depictions of the Garden of Eden in La Creation du Monde.  The fact that Adam and Eve are naturally naked with their privates showing, may explain why he's not better known over here, despite his ligne claire style. 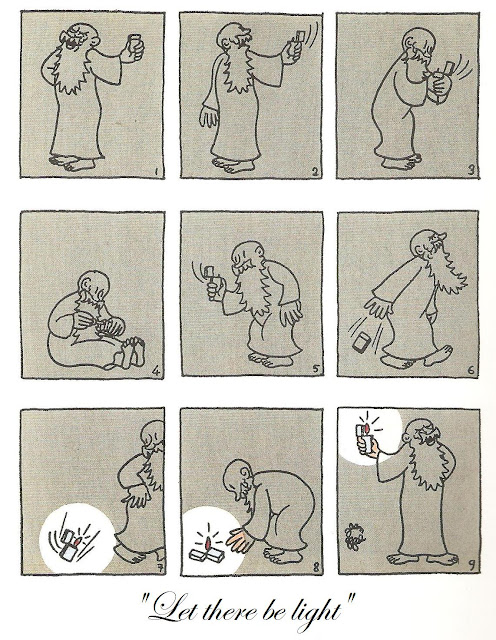