Usually, the main aim of a newspaper comic strip is to tell funny jokes. If the characters are easy to merchandise, that'll help keep their creators afloat since their longevity can be attributed to their reassuring appeal on the funny pages. But sometimes you get a strip that defies rational analysis.  Shoe is pretty difficult to make a profit from, since the characters aren't exactly what you'd call snugly. The daily strips are more whimsy, and the Sunday strips are like mini-essays in their own right. 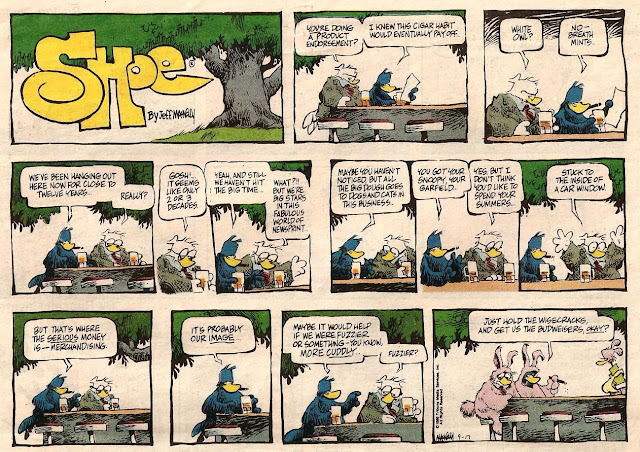 Shoe is in an unique position where it has "funny animals" working in the newspaper business, yet it isn't even considered a mascot of sorts for the workplace. Save for the books and coffee mugs, the scope of actual product that can be linked to the strip itself is rather limited. 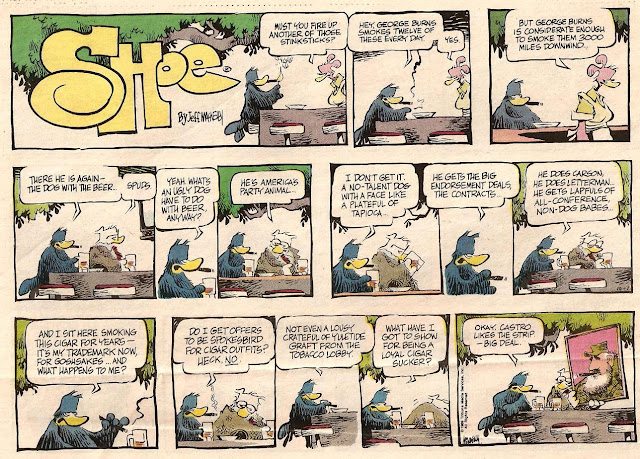 The online store only has a select few items related to the strip, the most memorable item being the Skyler's Boot Camp series, originally collected as a and now available for a free download. Skyler's Boot Camp comics were a surreal experience in what was a normally an everyday life comic. Every year or so, Skyler would attempt to go away from the pressures of school, and go to regular camp, but somehow, he always managed to make his way into a military institution, which is pretty much the opposite of rest and relaxation. The highlights was seeing this essentially wimpy kid try to reason his way out of the military's harsh training and failing. 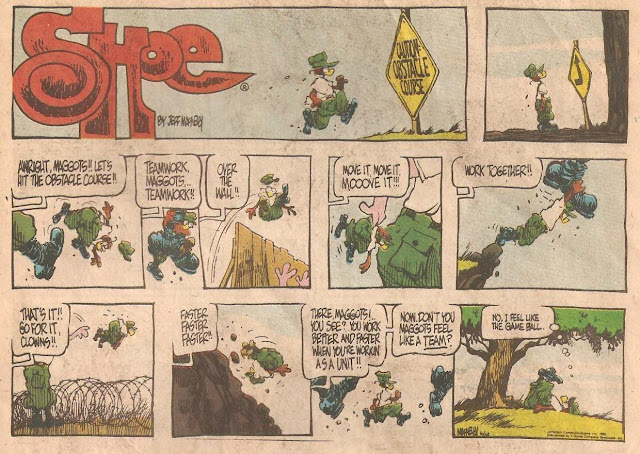 The collected Boot Camp strips only go up to the 80's when they started petering out. There was another Boot Camp story in the 90's when Skyler actually intended to go to Boot Camp, since every previous experience of him trying to escape just led him further inside the military quagmire. So when he signed up, he was completely mystified when he wound up at regular camp instead. The day activities of doing banal play activities left him looking for booby traps and potential threats where there were none. Imagine Sosuke Sagara on a lesser scale. It was a brilliant satirical take on Post Traumatic Syndrome for soldiers unaccustomed to civilian life, and I'm sorry to see it wasn't included. Maybe it will be someday.
Posted by DeBT at 11:08 PM