Dave Sim of Cerebus fame just recently announced that his monthly project of using photo-referenced girls as a parody of fashion magazines, Glamourpuss, would be coming to an end because of low sales.  This was shortly after his failed attempt to emulate Maus with his Judenhaus one-shot, which failed to take the world by storm.  The fact that it focused on the same insular comic book market that increasingly became one of the many things that drove him around the bend at aiming his unorthodox material at a particular niche audience might've had something to do with it.  To get an idea of what I mean, Judenhauss was an analytical look at Antisemetism through the ages, and near the end, references were made to praiseworthy Jews who were spared from the Holocaust were mainly limited to comic book creators.  An admirable sentiment, if somewhat limited in the larger scheme of things. 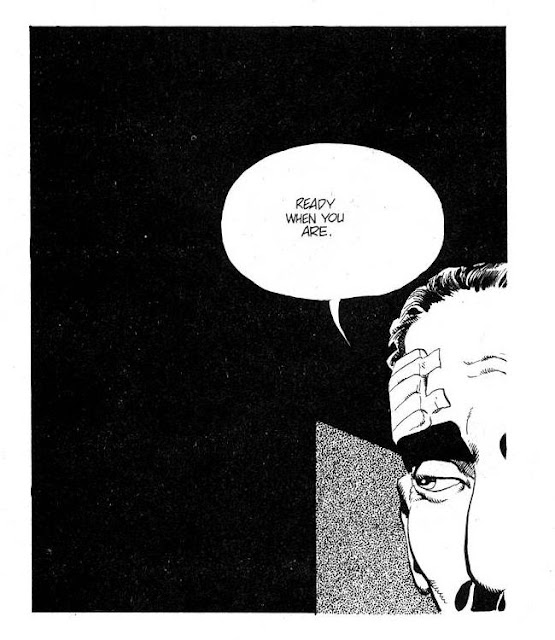 The cancellation of Glamourpuss was probably inevitable, since there was no single coherent ongoing narrative, and the comic was devolving into insanity in later issues. In addition to his Cerebus Kickstarter program suffering a setback due to a fire destroying his originals has led to an outpouring of praise and recognization of the man's works around the comics blogsphere who put it much more succinctly than I could.  This has also led to a surprising offer from Fantagraphics to take ownership of Cerebus for one of their reprint projects, which would take some of the edge off worries of reprint  costs and keeping Cerebus in circulation.  So faced with this generous deal, what was his response?  An insistence to make this matter public rather than do a backroom deal.  Mystifyingly enough, he feels that his work wouldn't be up to Fantagraphics New York Times style reporting, even though no such claim was made.  Feeling insecure that Cerebus wouldn't be up to par for the high standards of Fantagraphics? Producing an influential and intimidating body of work isn't praiseworthy enough? 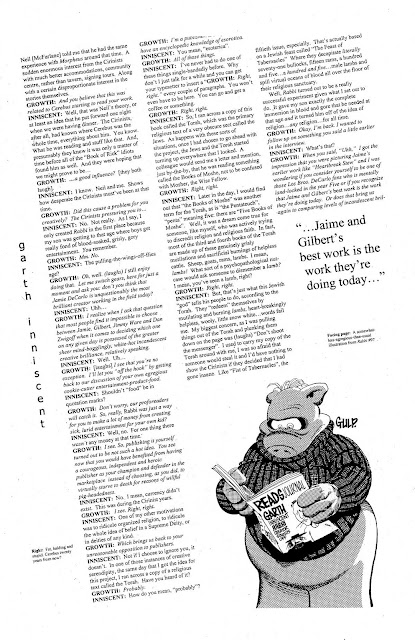 Ironically enough, there WAS a point late in Cerebus when he did a parody of the Comics Journal, part of the Fantagraphics editoral line. (These pages are a spot-on parody of the Comics Journal, right down to the blurbs distracting attention away from the attractive pictures) While the last arc is often lambasted for its heavy-handed religous screed, Latter Days also has some of the funniest Cerebus moments in it. It's probably just best to focus on the stuff at the beginning 2/3rds, and ignore the last half when Woody Allen appears.

As Dave Sim admitted to himself, Cerebus was never quite a hot seller, even back when it was revolutionary.  Only a smattering of interested parties would even dare to crack open this intimidating tome.  Personally, apart from the few masterpieces early on, the majority of Cerebus can be considered for hardcore comic fans only.  Cerebus was always something of an odd beast, even when it was being published.  The few tie-ins that WERE allowed by the creator would've been impenetrable by anyone hoping for some explanation or clarity.  Upon flipping open the pages of a random book, the average reader would be completely flumoxified with the going-ons of the sequence of events, particularly anything to do with the Roach, the S-hero parody pastiche.  Anybody wanting to jump into this serious undertaking of the Earth Pig's "adventures" would have absolutely NO IDEA of what to expect, let alone get any satisfying explanation for anything that was happening.  They would be put off by all the rampant confusion, and go seek easier-to-understand comics elsewhere.  One such example was when Cerebus made a rare crossover appearance with other independent comic creators, such as the Ninja Turtles and Spawn.  These would happen outside of the main story narrative, and wouldn't be considered canon by Dave Sim's standards.  To someone who had absolutely NO IDEA of the many inside jokes that were inherent within Cerebus at the time, a new reader would've been absolutely mystified with a certain piece of fanart shown in the Spawn 3-issue miniseries, Violator, written by Alan Moore.  (Yes, THAT Alan Moore)


As has been pointed out, one of the major sales resistance points of Cerebus has always been the certain lack of explaination of exactly what Cerebus is about.  There's simply no description of the contents or summary on the back of any of the 200-500 phone book collections.  There's not even a blurb of the contents, or a list of the cast characters.  Disappointingly enough, any serious attempt to analyze Cerebus on a issue-by-issue basis have all been suspended before they even finished the first volume.  Of course, Cerebus is the kind of comic that defies categorization, and can't be simply pigeonholed into one specific category.  Is it a satrical take on Conan the Barbarian?  Is it a parodic take on the underlying face of politics?  Is it an analysis of religion and corruption of power?  Is it a look at the life of a single woman growing up on a mountainside?  Is it a biography of the last days of Oscar Wilde?  Is it an attack on feminism with ties to the Comic Book scene in the late 80s?  Is it a play on the author / creation mindset?  Is it a tribute to a bar?  Is it a homage to F. Scott Fitzgerald and Ernest Hemmingway?  Is it an increasingly detoriating descent into madness?  Is it weird?  Cerebus is ALL of these things and more.

It would be nice to have the whole run of the legendary comic, as well as some of the one-shot comics that were never fully collected, such as the issues making up Cerebus Zero, ElfGuest, some of the colour short stories, and even a collection of the comic covers.  Including the run of covers with some problematic advertising on them.  (Only Guys has the ingrained covers essential to the story)  For all his devotion to his craft, it's surprising that Dave Sim hasn't taken full advantage of the unpublished works and promotional art of his Barbarian Aardvark in various comic anthologies and fan contributions.  Until Cerebus Fangirl pointed out a rare hardcover printing of all the covers (issue 113 isn't included, since 112 was a double issue), I wasn't even aware that such a thing existed.

While having Cerebus reprinted at a smaller size would be feastible for a more attractive model on the bookstore shelves, (something that's been done for foreign publication), it would also play havoc with the immensely teeny-tiny text that shows up in the later books; creating a discrepancy between volumes, something that readers hate.  There's also the question of whether some of the smaller volumes, particularly the Mothers & Daughters arc would be collected in a larger and more attractive format.  Of course, that also brings up the uncomfortable misogynic rant in Reads, which is where the slide into insanity begins.  (Some would argue it was always there to begin with - it just didn't become obvious until that point)  Of course, as it has been pointed out, Cerebus becomes immensely more enjoyable if you ignore the prose in the later books and just focus on the comic portions instead.

As a self-righteous self-publisher who's held steadfast to being in charge of his own comic for some 25+ years, Dave Sim is in a ballpark all by himself.  He was able to make his vision of publishing the comic equivalent of a Russian novel into a reality.  He foresaw the benefit of collecting his lengthy issues into one comprehensive package, when comic stores decried his practice for doing so, because they were detracting from sales of his past issues.  He constantly employed innovative use of the medium in ways that is STILL just barely influenced by 1% of current cartoonists.  And he did it all on a 20-page monthly basis.  (Having Gerhard do the backgrounds didn't hurt either)

And yet, Dave Sim probably feels reluctant to go hand in hand with another comic publisher after holding steadfast to not tying down to any comic company that would dictate their own agenda over the cartoonist's ideas. However, Fantagraphics is on a different level than the so-called Big Two that's been the main focus of the American comics industry, and is a completely different beast altogether. As an Indy publisher, they're closer to Dave Sim's onnus for self-creation, even though he's the most successful model AND the cautionary tale of being too involved with your own comic for too long.

Then again, Dave Sim claimed that Cerebus would never be translated into other languages, because of the immense translation and redrawing hurdles, and yet it's available in Italian and French. Likewise, being a Luddite, Dave eschewed any attempt to share his Magnum Opus online, yet finally broke down for sponsoring the Kickstarter program, which suffered something of a minor setback with the fire and all.  It's not obvious upon first glance, but these smattering examples are pieces of evidence that he CAN change his previous POVs. Maybe not the most problematic misogynist ones out there, but the ones that matter when it comes to staying fiancially active.

EDIT - it turns out that after a teasing fling with Fantagraphics, IDW will be printing the 300 Cerebus covers instead.  Whether this will lead to their publishing the remainder of the epic revolutionary descent into madness of the main comics remains to be seen.
Posted by DeBT at 11:02 AM