The Smartest Thing About MangaMan is the Title 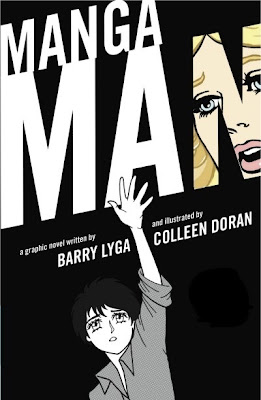 When it was announced that writer Barry Lyga and artist Colleen Doran were going to team up to give their tribute to Manga, I was apprehensive but wary about their proposed story of a Manga character falling in love with an American girl. It wasn't so much the pitch, but rather the execution I was worried about. Would the material stand on its own, or would it be an embarassment to look at? For the record, I might as well admit that I'm not at all familiar with either creators, save that Colleen Doran oftentimes claimed to be the first American "Shojo" artist, given that her designs for flamboyand wardrobes and long flowing hair would constantly grate on the nerves of comic editors who couldn't stand seeing such effeminite drawings from a FEMALE CARTOONIST. 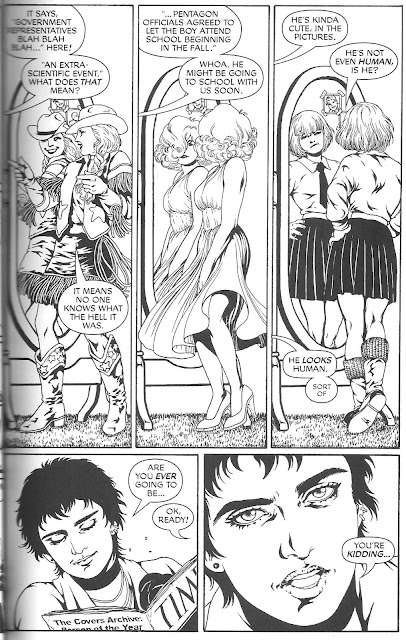 From the minimalist cover alone, you'd never guess that Ryoko, the titular MangaMan himself, had long flowing hair that wouldn't look out of place in a Shojo (or Shonen) Manga, but certainly looks out of place in a High school with a more restrictive dress code. This hairstyle would constantly change throughout the story, first from being cut short, to warping to spiky proportions representing whatever mood he was in. Even so, he's quite a far cry from the other MangaMan design on Anime VHS covers.

I went into the comic with low expectations, hoping that they would be dashed. They weren't.

I wanted to like this story, but the amateurish setup and execution kept preventing me from doing so. It was only 125 pages long (with extra pages allotted for chapter title and reused artwork) but it still felt like an eternity to get through. It's never a good sign when I need to take a breather every few pages in order to gather up strength to prepare my brain cells for the next onslaught of visual and verbal abuse. I was reminded of similar Manga-themed works based on Sandman, particularly The Dead Boy Detectives and Death: At Death's Door, which were less than successful spinoffs of Neil Gaiman's main storyline. 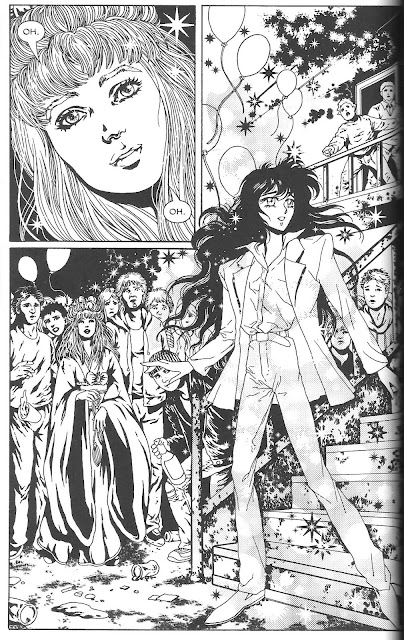 Compared to the typical dark plots that Barry Lyga is better known for, such as his Fanboy and Goth Girl, the setup in MangaMan is more lukewarm than anything else. Part of the appeal of Manga is that it represents a different kind of worldview that's oftentimes very un-PC when compared to the kinds of themes that they're likely to explore. (Even though many of those themes oftentimes take place at school where Japanese people spend the majority of their lives at, which explains the constant reuse of that setting - they stick to what they know) That kind of risque could've been expanded into a literal metaphor with Marissa finding some kind of inherent heightened risk or danger from hanging around Ryoko in a sort of reverse bad-boy archetype, since he doesn't quite follow any of the usual rules that make up such rebels. But it never quite goes down that path. It's as if Barry Lyga thought up the concept overnight and then just stopped expanding any possible creative output that such a scenario could involve.

In addition, Ryoko's extreme reactions to the slightest things such as seeing an attractive girl or simply raising his hand in class sends the students around him in turmoil because they cause disruptions every time he does so. It's that kind of overreliance of extreme excitement that turn off people from enjoying Manga in the first place. 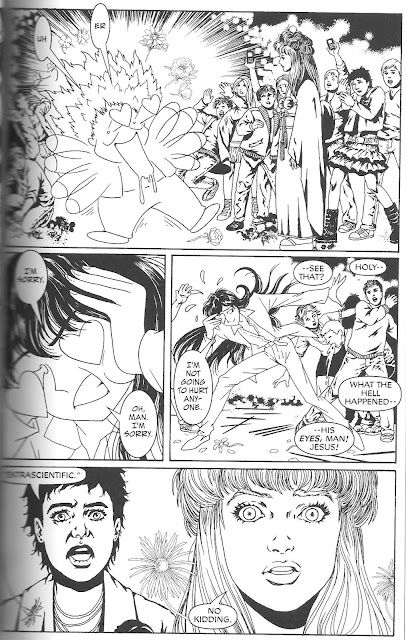 Where it gets problematic for me is when the story ventures into Grant Morrison territory, with the MangaMan testing the borders of the American comic conventions. That makes it just another comic breaking the fourth wall without fully expanding upon the consequences of doing so, and becomes a tipping point of stealing ideas from other people. If you're going to rip off obvious sources, you'd better be sure to take that concept all the way to the moon.

Another failing was a certain detail about the Federal agent in charge of looking after Ryoko. Although the Government guy claimed to be familiar with Manga, he still freaks out when Ryoko symbolically conveys the "Kaju" monsters. Anybody familiar with Manga would already be used to characters doing emotional representations happening in the background, and shouldn't be surprised by such common occurences. Maybe it'd be a little different seeing it in real life, but even so. 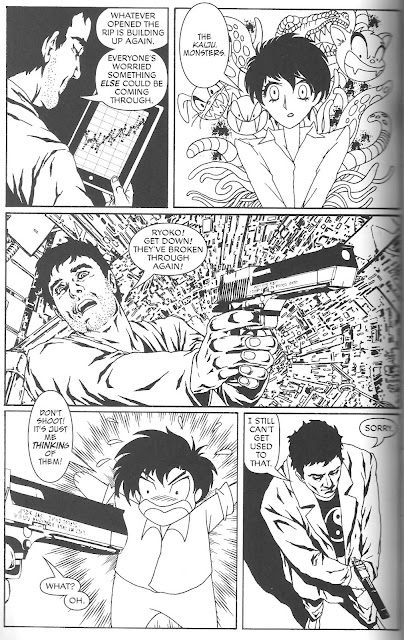 If anything, it could've been more about culture clashes, and trying to cope. One particular example is how every time Ryoko does any movement, no matter how mundane, he leaves trails of "speed lines" lying around, creating a mess. This could've been avoided by trying to rein in that mode of expression by studying old-school animated cartoons where anthropomorphic animals would display "thinking" or "yelling" lines that gradually fade away. If there's one thing Manga characters excel more at than Western comics, it's training. Another factor that could've been expanded on might've been how anybody can tell what anybody else is feeling with their subtle facial cues. Manga characters are basically an open book, compared to realistic faces, and Ryoko could've wondered how anybody could tell what anybody else was thinking, since there would be no telltale signs. While he could've just as easily resisted on the grounds that he wouldn't want to wind up looking like one of those narrowly-slitted serious rival guys, this kind of coping would have to be necessary in order to deal with his new world.

It was as if the writer saw the potential popularity of Manga and wanted to cash in on the broadest Manga tropes without fully exploring the wide range of topics available. It's like reading a sex manual from your grandparents. They may be experts in the field, but the way they describe the act feels old-fashioned and out of date. It's less than reading the Kuma Sutra, and more like cliff notes versions hastily scribbled down from Playboy. No matter how much care has been put into it, something about the material just feels 'off' somehow.

It leads one to wonder just what possible audience this work is intended for. It has realistically defined detailed people, which would appeal to connoisseurs of realistic art, but Ryoko's overreactions would sour them. The background details are lovingly rendered, but the Manga segments would be old hat to any major Otaku. The theme of love overcoming all obstacles is as universal as ever, but the overall theme would be too juvenile for older people. It tries to aim for both audiences, and winds up pleasing neither. It IS possible to create a work that'll appeal to both demographics, but sadly, MangaMan isn't it.

In general, I felt it was a story with squandred potential that could've been more imaginative than it allowed itself to be, and wound up poorer as a result.
Posted by DeBT at 4:26 PM