With the sudden popularity of The Hunger Games, American markets have finally decided to give some attention to the Japanese movie that was very reminiscent of the tone of the trilogy of books; Battle Royale. There's even been talk of adapting BR into a television series. Beyond the problematic aspect of the limited storytelling scope of a classroom of teenagers being forced to kill each other, lest the collars around their necks blow off, it feels like Hollywood is just scrambling for old properties that wouldn't have been allowed after the Columbine shootings. If you're going to chase after societies ruled by sadistic game shows, there's really only one title based on that concept that hasn't been approached yet; National Quiz. 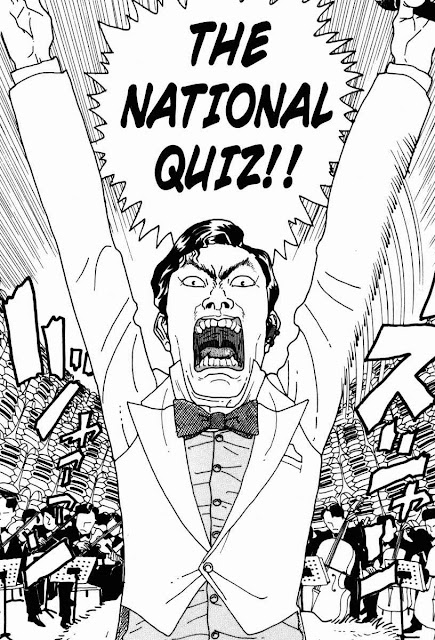 Written by Reiichi Sugimoto and drawn by the inimitable Shinkichi Katoh, the National Quiz is a regular tour-de-force. In the world of the National Quiz, the Japanese government is run by a state-mandated dictatorship with Terry Gilliam-like overtones that depends on a quiz show to appeal to the masses. Pretty much every camera angle involves the show host wearing various disguises and constantly changing scenes in order to ramp up the excitement of the players up to 11. What makes this particular parody of humiliating Japanese game shows impressive is the number of contestants that're required to make such guilty fare acquire successful viewing. Battle Royale had 42 students fighting for survival. The Hunger Games had 24 children fighting for same. By comparison, Survivor has 16 contestants, and Amazing Race has 22 contestants in pairs. Even Jeopardy and Wheel of Fortune only have a mere paltry three people. How many contestants does the National Quiz get? A whopping 500 CONTESTANTS. A DAY. 365 TIMES A YEAR. 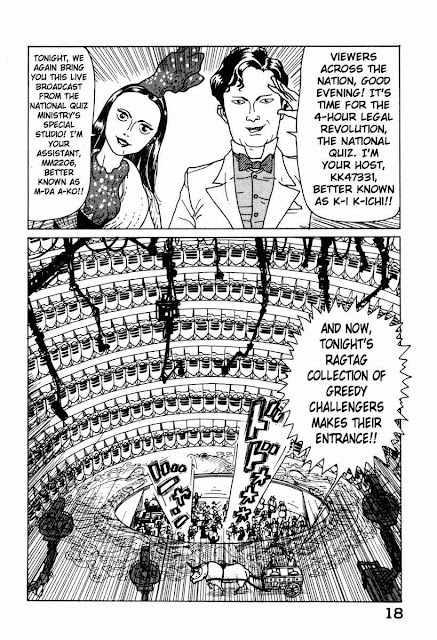 But what is it about this game show that's so highly competitive that it'd require so many people to try out for it in the first place? Well, even though there's a large number of contestants, most of them will be eliminated from the first round before the day is out. In order to qualify for the prize, you have to correctly answer 100 multiple-choice questions in a row. Failure to do so will be open grounds for dismissal. However, if you manage to beat the odds and answer the final question correctly, the government will grant any wish you have, no matter how mundane or far-reaching it is. Want to live the rest of your life in luxury? Done. Want to have a bully murdered? No problem. Want a cure for a destabilizing disease? Perfectly reasonable. All that needs to be done is for you to win the National Quiz. To get an idea of how far-reaching consequences of the National Quiz is, it can even influence foreign policy in other countries that are indebted to Japan. And in this world, Japan is such a powerhouse that it can easily suggest elaborate acquisitions in exchange for lenient reductions without question. 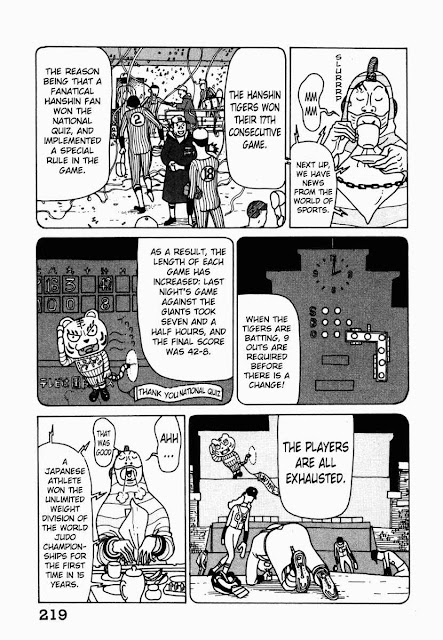 Although these are multiple-choice questions, don't be fooled into thinking that they're easy - many of the questions are very difficult, which reduces the number of contestants by more than 90%. The lucky few who've managed to answer all the questions without cracking up under pressure are admitted to the final round where they can compete for the final prize. The rewards are large, but it comes with high risks. Unlike the Hunger Games or Battle Royale, there's no punishment of death if you lose early on. However, if you make it all the way to the final round, but get the answer wrong, you'll be branded a war criminal and put to hard labour for how much you wagered in order to get your wish granted. The main character is the announcer who originally went on the National Quiz, lost, and now is the most popular host for the show. While K-I K-Ichi puts up an excited front in front of the cameras, off stage, he hates what he's forced to do, and only gets through the day by numbing himself to the whole experience. Inwardly, he knows that he has no choice but to follow the state doctrine. 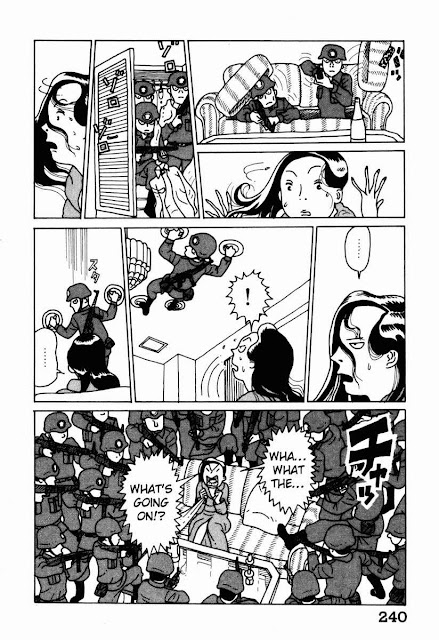 In addition, he's also estranged from his divorced wife and child. Despite his prestige and popularity, he's still a political prisoner. In his position, he's unable to see either of them, since all of his spare time when he's not on the National Quiz is spent withering away in his cell or memorizing lines for the next show. Despite their misgivings, there's surprisingly no real bad blood between the ex-wife's successful business and her daughter's reluctant desire in wanting to see her father. 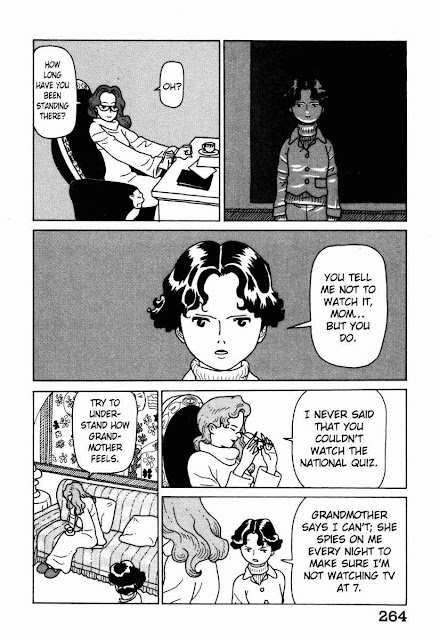 Other people involved with the National Quiz include: 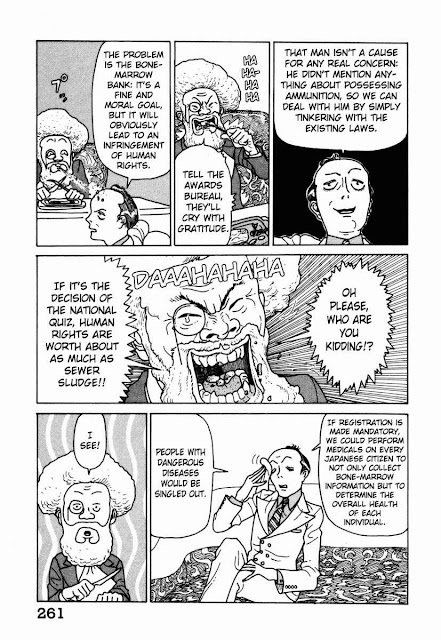 Unknownst to K-I K-Ichi, there are other factions that are also against the National Quiz, including daily protesters, an amateur terrorist group calling for the assassination of the game show host, and a snake-woman spy from the Republic of Sadogajima who wants to overturn the decisions made in the National Quiz by invalidating the public's feelings for the show. Together, they hope to take down the dictatorial National Quiz by letting the public see for themselves just how unfair the whole system is. (Though they'd need to implant at least three suicide volunteers in order to get past the luck-based 100th question, which seems to have been forgotten, but that's a minor complaint) Through their secret alliances, can they succeed in their goals to have such an oppressive political system removed? 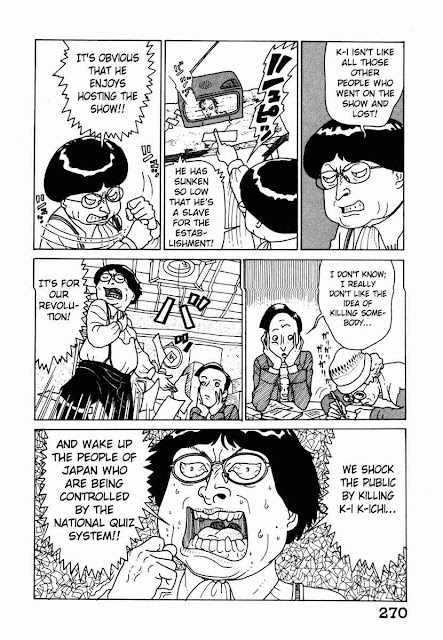 ...Well, the way things turn out could also explain why it hasn't been picked up yet. Things aren't reverted back to the status quo, but nothing is completely settled either. The first time I read it, I (among others) was disappointed in the ending after such a strong debut and follow-through, but it makes sense the more you think about it.

On the one hand, it's rather courageous for a mostly humourous Manga to make its serious point right at the very the end. The only other place I've seen do that is in another Japanese short story from Monkey Brain Sushi; Mazelife. In Mazelife, a man named "K" is extremely anxious about thinking and emotions, and goes about into wanting to simplify his life by making himself into a robot. But he quickly finds the process of creating a formula for covering the most basic things, such as making a sandwich, would be more work than actually living life, so he decides to create a God to do his thinking for him. And that's when the fun begins...

Despite the ending, the National Quiz Manga remains just as satrically brilliant as it did almost twenty years after its inception. The whole time I was reading it, I had absolutely no idea what to expect next, even though it kept moving towards an obvious goal. This is the kind of over-imaginative story that looks best in its comic form, and would cost a fortune if it were cast in live action. (500 individual contestants per game?) It also doesn't suffer from the sin of most Mangas that openly rely on stock poses in order to save energy on drawing the story. No two drawings in National Quiz are ever alike. Each single panel is a beauty to behold, and the surreal landscape is ultimately mesmerizing. In addition, it's short - only 4 volumes, or two omnibus collections. Pretty much every page left me wanting more, and that's the best results an author can hope for. 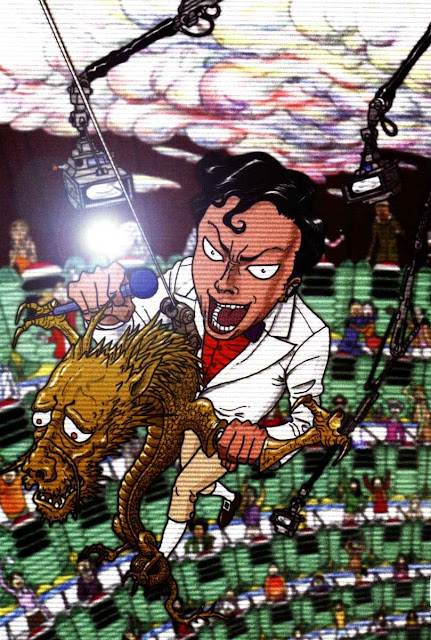