Like any other kid, I spent most of my Saturday mornings watching cartoons on TV. Over time, after watching the same cartoon multiple times, I began to notice some annoying little inconsistencies, such as how a sign would be flipped up and be briefly blank on one side, before showing the hidden writing later. I now know that this was to cut down on production costs, because who’s going to notice that insane attention to detail? (Eyes dart around nervously)

One particularly erroneous example that annoyed me was when the Coyote accidentally rocketed himself to China. I didn’t object to the fact that a rocket would’ve likely burned itself up upon approaching the Earth’s core. I didn’t complain that the Coyote escaped the gravity of the symbolic inner planet much faster on his return trip. No, what I found indefensible was that the Coyote changed directions midair at the very last second. Remember, he fell into the hole feet first, so by all rights, he should’ve landed on his feet upon re-entry instead of his head when he did that U-turn on the cliff face. 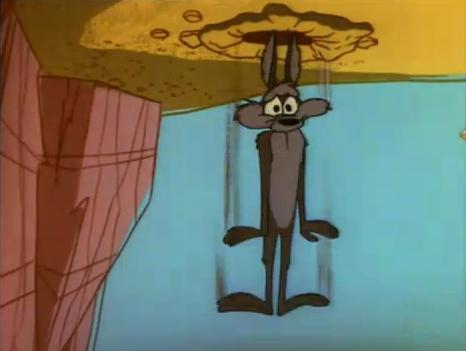 The Gummi Bears is a remarkable anomaly in that there's practically NO merchandising, which is quite rare for a Disney property. I’ve been enjoying watching the frist three seasons on DVD after not having seen the show for years, and catching all the little things I missed the first time around. One thing that really jumps out at you is the attention to continuity even among the stand-alone episodes. The Gummi juice only worked on humans once a day, despite it working for Cavin in the first episode. Likewise, there was some discrepancy of size reagarding the humans and bears; Duke Igthorn seemed twice as large as Cavin, but was later toned down to a more reasonable adult height. Sometimes the Gummis would be as high as Cubbi, and other times, they would be their normal height. In addition, the magic words for Zummi's lighting spell kept changing with every writer who couldn't keep that little nugget of information straight. Otherwise, the mistakes were kept to a reasonably small number.

Until it was pointed out that Princess Calla played a much larger part compared to knave Cavin, I didn’t even notice that it was her who was holding the knight-in-training on a piece of rope. Then again, in my defense, it went by very quickly, and was sandwiched between two short clips of the boy bashing an ogre’s head with a piece of meat, and looking impressed at the contents of the Great Book, so it’s easy to see where the confusion lied. Taking a closer look at the screenshot, I'm wondering where his legs are resting. Any ideas? 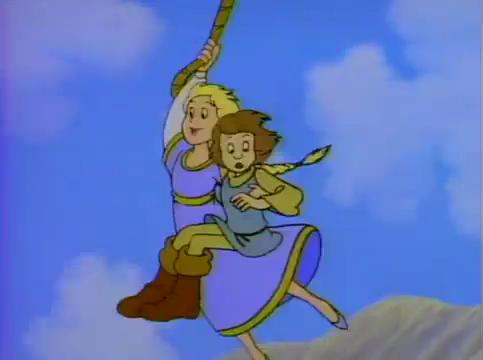 Another detail that I didn’t notice in the opening was the inconsistency of was Cubbi rolling towards the ogre in Up Up and Away. Do you see anything wrong with the following screenshots?

Simply put, the ogre is falling backwards, when in all likelihood, he should be plunging forwards. That's not how physics work. The ogre is obviously on the take and deliberately taking a fall. It's rather embarrassing that I never questioned the unnatural movement despite seeing it multiple times in the revamped opening. Reading multiple martial arts Manga has ruined cause and effect for me.

In The Crimson Avenger, there’s a scene where Cavin is framed for stealing the King’s ruby studs, despite being nowhere close to the man when they were taken. (Then again, this was during the medival ages where being caught with stolen items was all the proof they needed) Can you tell what’s wrong with this picture?

Hint - a certain horse is standing in midair a little higher than it should be. Otherwise, the horse is resting on a very narrow stretch of sidewalk. As admirable as it is to praise a quality show for high production values in animation and story, sometimes it’s just... FUN to find silly preventable mistakes like these. It makes you wonder if the animator badly mangled the top of the horse’s head, and didn’t bother correcting it, since hey, who’d notice?

Given the flush animation, you'd be hard pressed to find any heavy Anime influences for the overseas cells in Japan. Though there is one notable exception; remember the weird trapped wizard from For Whom The Spells Holds with the rooster comb glove on his head? That’s Dr. Tenma, Astro Boy’s father. These are the kinds of details you only begin to appreciate years later. 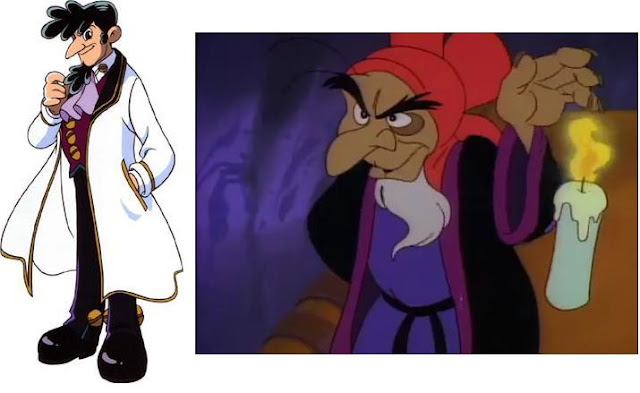 Despite these niggling complaints, I really hope there's a continuation of the remainder of the Gummi Bears episodes. I never saw the epic two-parter finale, King Igthorn. The last episode I ever saw on TV was The Knights of Gummadoon, where a castle appeared once in 100 years, and the fact the episode ended with a book closing in on them, I thought for sure that was the last episode, since I never saw any more of them after that until today. I don't even have the luxury of downloading said episodes, since there aren't any Srt. subtitles. I waited 20 years to see the Gummi Bears again. I can afford to wait another six years for the next DVD set. I just hope that it'll be soon.
Posted by DeBT at 11:32 AM