Video Games - My Salvation and Bane

Sorry for the lack of posts last week. I was all set up to create a post after going on a writing spree from some sudden time off on Thursday, but that was only for a short story whose entire concept was scribbled on a scrap of paper, and took the afternoon to lay the basic skeleton structure. By the time I was all finished, I'd only managed to throw away two pieces of paper out of my pile of notes, and I hadn't even started on a blog topic yet.

I decided to use the last post for a placeholder, and was all ready to show it, when a friend introduced me to another online gaming site full of free games. Normally, I regulate myself to playing widely unavailable Nintendo games on emulators, with savestates so I don't have to replay the annoying obstacle course 100 times just to fail one last tricky jump before the end. However, some of these games looked rather addictively fun. One of them was The Asylum, where you try to treat various mentally damaged stuffed animals through means of hypnosis and therapy. (Ironically enough, I had the most difficulty with the autistic hippo and had to restart several times using the electroshock device underneath the bed) It's recommended that you play the hairy penguin last, since there are references to other patients. 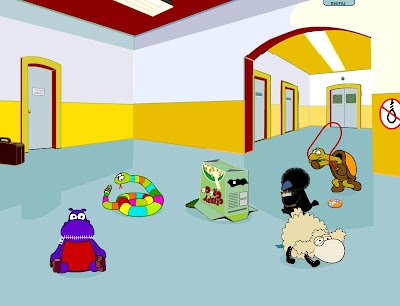 The shortest "game" I ever played isn't really a game, but actually an educational scale model of the Universe according to size, and may remind people of a certain Simpsons couch scene that's inspired by the NFB's Cosmic Zoom.


The reason I keep coming back to these addictive platformers at the risk of damage to my frontal lobes and general health is because videogames are the only thing that make me feel alive. Even when I become incredibly irritated whenever I'm interrupted or make mistakes, there's nothing like the thrill of getting that elusive item after hours of searching. Solitaire simply isn't enough for me.

For the most part, playing these games is just something to occupy my time while I wait for the next Mario or Zelda game. However, waiting for Nintendo's next release when each game can take up to two years to complete simply takes too long, and I seek out gratification elsewhere in order to get my fix. For that reason, I seek out other hacks of their previous games that're extended "expert mode" versions of their games, or Indy games that rely on exploration. New Super Mario Bros. and Treasure Adventure are highly recommended. Pretty much any game that borrows the sense of joy (and frustration) from playing these gaming classics is high on my list.

Besides, their stories become more elaborate with fancy graphics and inane dialogue, while adding absolutely nothing new to the gameplay. I don't need a long-winded motivation to bash in some bad guy's head every five minutes. I just want to be able to explore and gather as much stuff as I possibly can. (Incidentally speaking, the first time I played a Mario game was on a Black & White television, and I thought the goombas were human faces walking via moving mustaches. Now there's an interesting alternate backstory right there)

I keep playing even though I know that it causes me undue stress with every failure, and takes away time and concentration from things I should be doing. All that matters is getting 100% completion on everything, no matter how insignificant. This is the kind of thing that Achievement Unlocked appeals to me, even though I get rewarded for doing the most basic things in typical sidescrollers, it eventually gets harder to get those remaining few goals in order to get the desired 100%.

For the past few days, I've been obsessed with Burrito Bison Revenge - a game about a minotaur who wants to beat up hundreds of gummi bears using various wrestling poses for daring to steal his wallet. (Don't ask about the excuse plot. Just enjoy the insanity) 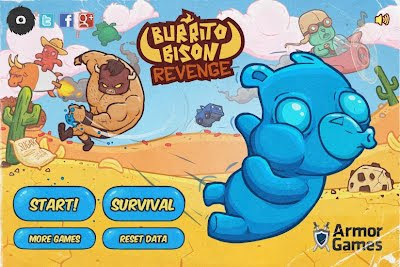 The challenge comes from trying to complete the majority of the mostly luck-based missions. And indeed a lot of the missions seem statistically impossible, even if you increase your odds by buying more bears to the game. Early on, the only way you can advance is by buying certain powerups after you've earned a certain amount of money. One of the first you'll want to purchase in a hurry is the Increase money from defeated gummies option. At first, you'll have to monitor your actions early on to ensure your chances for victory. But once you've received a certain amount of powerups, you can pretty much leave the screen alone for several minutes and be guaranteed that the action will continue from the minotaur bouncing around even without your constant guidance. You can check back sporadically to use the powerups once in a while, but if you're not concerned about getting the highest score, you needn't bother.

Actually, Bison Revenge is nothing more than an improved version of Nacana Crash, which takes its character sprites from a dating simulation game. It's a game that starts out with some minor schlub standing all alone in a corner when all of a sudden out of nowhere, this cute girl on a bike crashes into him, sending him sprawling off at high speed, where he's routinely punched by any girl who dares to get close to him. (In short, just another day in Haremville) The exceptions are two boys who are in the way who either slow him down or change the angle of his movement, a long-haired brunette who blocks the next girl the guy gets next to, and a glasses girl who can end the game prematurely. The objective is to get the guy flying for as long as possible.

In a sense, Bison Revenge is the American version of Nanaca Crash that's gotten the Kirby effect where instead of some poor schlub being beaten into submission, it's now a powerful macho male figure beating up other weak creatures for money in order to get ahead.

Nanaca Crash's instructions only give a few basic pointers while ignoring any potential hints that could actually help the player, and have to find out for themselves. For instance, at the beginning, after you select your angle, you have to HOLD the mouse button until you've got your power setting. Too many novics make the mistake of only pushing once, assuming the game will wait for the next click. Also, while the game normally stops when you land in the bosom of the green-haired glasses, that's only if you're on a rebound. If you've been kicked by a girl beforehand, then you're given the biggest combo in the game. But you have to be quick - wait too long, and the game will be over at that point. I've only been lucky enough to get bounced from TWO consequentive glasses girls in a row. And then I hit a blonde guy and all that forward momentum got shot upwards instead. 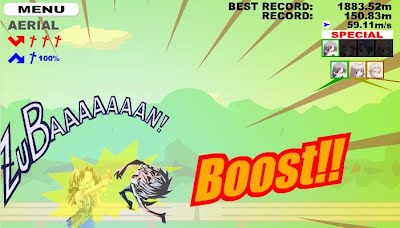 Another thing that isn't apparent is that after you hit the long-haired brunette, you have a chance for a special Comic Force Field with one of the other violent girls at any multiple of every 100 meters. And you can't use her own special against herself. Too bad there isn't one for the guys, since that would be rather amusing. The girl in charge of the special attack is the same girl who crashed into you at the beginning, and I suspect she's reacting to the "love triangle" between the guy & the rival girl, and depending on who's present, each girl has a different effect.

The glasses girl gives you Double Impact, which doubles the distance for the next five girls who hit you. This includes combos as well. 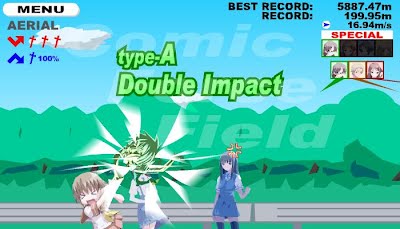 The brown-haired girl gives you a Charge Blast that takes up all your pent-up energy and releases it when you're on the verge of stopping. 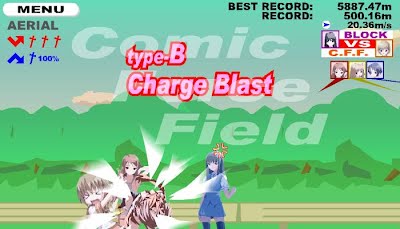 The blue-haired girl makes you a Parachute Death Sentence, that lets you teleport (fly) across the field over 100 people. 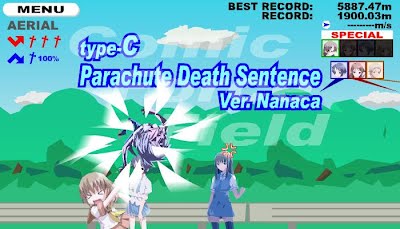 The blonde girl gives you a Bound Boost which doubles your bounces on the ground instead of slowing you down. 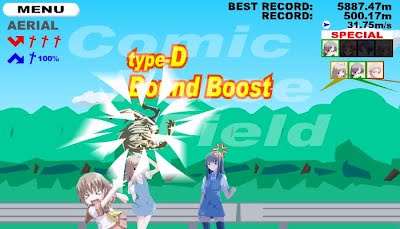 To be able to hit these elusive targets, you need to take advantage of the midair bike collisions. It may not be apparent, but there are two different cycling "boosts" that you can achieve at certain heights. If you're falling towards someone you don't want to hit, you can click the mouse to use up one of the three available red boosts. Alternatively, if you're bouncing up off the road, but want to hit a target below and to the side of you, use the blue booster to bounce down and reach your girl. Unlike the limited midair boost, this'll gradually refill its meter in midair, but only in the middle of the sky. Too high or too low, it won't register in the "sweet spot" zone.

During the course of playing these kinds of games one of two things can happen. Either I accomplish everything the game has to give me, or I grow tired from the intense repetition that's involved. Either way, it sets me up for a bout of severe depression afterwards. I only grew tired of Nanaca Crash after it became apparent that there was no possible way I would be able to beat my previous score of 14,000 Meters. The last straw was when after a particularly good combo, I was suddenly stopped due to a bad bounce. It also didn't help that the only possible "Good ending" was the same, whether it was 10 meters or a 10,000.

After achieving multiple highs from finishing everything a game has to offer, the down invariably comes, leaving me to cope with my fix and focus on other stuff that I've been putting off. And so, the cycle continues. 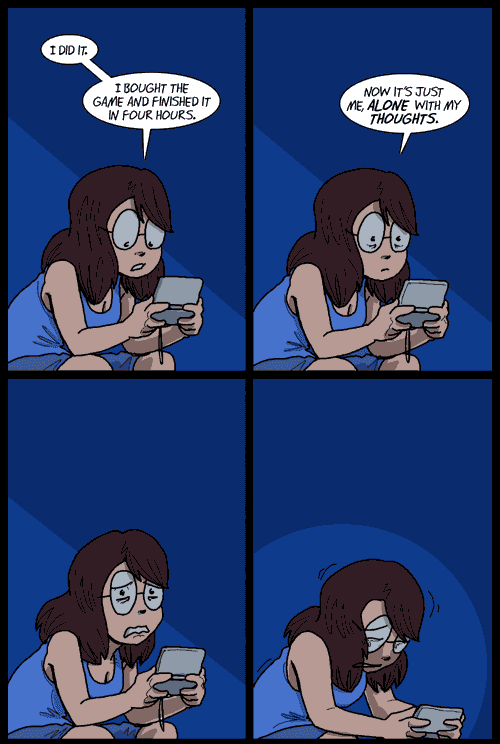