To the sharp-eyed observers noticing the numbers at the bottom of one of the Shoe comics in my last post, they're actually notes from my mother trying to crack the code to the Orbit codes that could only be deciphered by subscribing to become a primary member of the Orbiteers, by using the code symbol of the Key planets as a reference point. 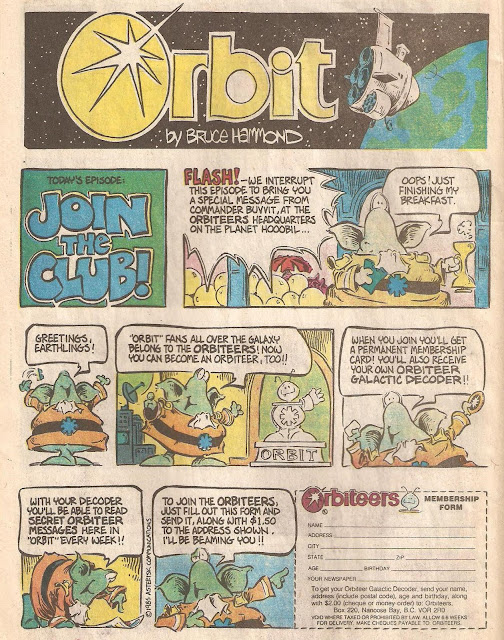 Or at least they would be considered undecipherable if the codes needed to figure out their hidden messages were more complicated than just using a cipher wheel. (Better known as moving the alphabet several letters away from each other) It also helped that there were spaces in between the nonsensical words, so I could figure out how long the sentence was. Once I was able to figure out what certain key words were in one, I could use them to fill in the blanks for another, especially if I already knew the answer to the joke. This made it easier to break down their 36-character cipher (numbers were part of their coding system).

At first, I ignored these little meaningless words since they weren't imperative to the narrative, but it began to gnaw at me over the years. I'd had these comics since my childhood, and it gnawed at me that there was something about them that I hadn't memorized backwards and forwards. Over time, I was able to compile a comprehensive list of answers to a feature that was largely overlooked. They're not exactly on the same level of "Be sure to drink your Ovaltine", but they're still kinda amusing:

1. Orbit fans across the galaxy welcome you to the Orbiteers!
2. Have you gotten your Galactic Decoder yet?
3. Hi Earthlings. I am happy you have joined the Orbiteers!
4. You get a pooched egg.
5. My pet glurb. Has 329 purple tentacles, one blue eye. Answers to the name "Cuddles".
6. If you eat uncooked Plokberries, your antennae will curl.
7. Used planet hopper in good condition. Needs new Stardrive clutch.
8. He had a leaky Woof.
9. My big brother is mean. He won't play with me because I'm only 647 years old.
10. One planet in nice neighborhood. Bring your own atmosphere.
11. Because there's no present like the time.
12. Because he has had his Flue shots.
13. Put them in a Barking Lot.
16. Because 789.
18. If you have any donut jokes, send them to me, I collect them.

14-15 were advertisements to join the Orbit Fan Club, and requests for readers to send in their alien fan art, and 17, 19-31 are missing. This isn't from any Sunday comics I don't have, but from the latest Orbit comics no longer bothering to fill in that little blank spot. Whether this was from the newspaper refusing to print these little extras or Bruce Hammond's laziness at updating these silly little extras was something that was never adequately explained. However, it came back without warning for the duration of the strip's run before it was unceremoniously canceled. 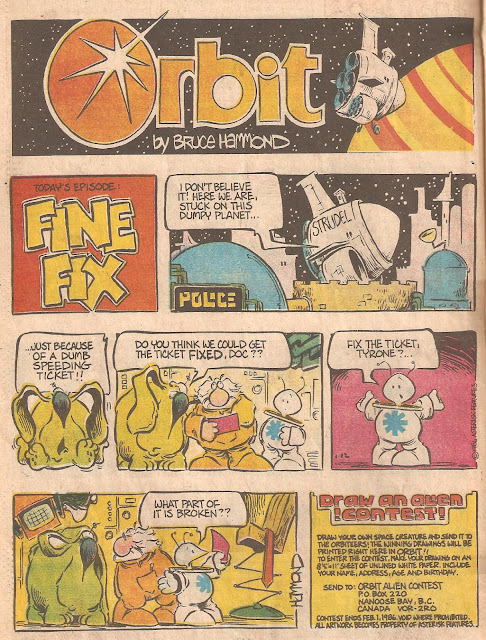 So far, of the 46 Orbit comics, only 30 of them had secret codes attached to them. (To simplify matters, I didn't include the early comics which didn't have the extra yellow box, or the other Sunday comics I was missing) The final breakdown for which planets were used tallys as follows:

Uranus seemed to be the least popular choice for some reason, with Jupiter coming a close second, and every other choice being closely tied. No guesses for why Earth wasn't chosen.
Uranus was also the one that was the most difficult to complete, since there weren't any others it could be used for, and the puzzle it was used for (no. 9) gave no clue to its contents.

For those curious about the questions to some of these answers, here's the English cheat sheet referenced to the relevant answers above. (Though you could try to reverse-engineer the results yourself) Only No. 1 is excluded, since it was the only one that appeared in complete gibberish. 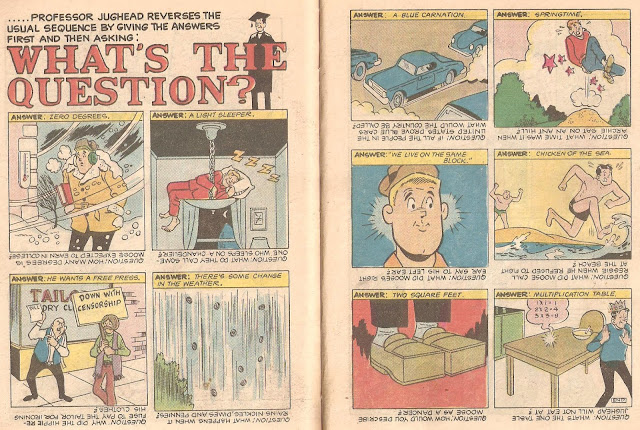 32. What do you get when you cross an ice cube with a pig?
33. Why did the cat eat lemons?
34. What's green with red spots?
35. Why do birds fly south for winter?
36. What do you call a carrot that talks back?
37. Why is hot faster than cold?
38. What has two humps and lives at the North Pole?
39. What runs from place to place without moving?
40. Why did the duck go to Congress?
41. What do you get when you cross a fig newton with a college student?
42. What city has the most lights?
43. What do you get if you don't pay your exorcist?
44. Why did the baker go out of business?
45. Why is caring for baby rabbits hard?
46. Fymblurt Nurb. Head Coach Phrugg Stadium Alderbaran V
Posted by DeBT at 10:07 AM