Usually, Mother's day is a general celebration to give begruding respect to the people who gave birth to us, and to have a day to themselves to make up for all the trials they've had to endure from their children during the course of their lives.

However, I'm usually stymied around this time of year due to an unusual coincidence. My mom was born in the spring, which means I'm struck with a double whammy of trying to find adequate presents for both Mother's Day, and then her birthday. Since my parents are notoriously difficult to shop for, unless they give specific hints on what they want, I'm usually at a loss on what to give them. I know my mother likes flowers, but my dad always gets her perennials, which die out when summer is over. At least they last longer than the snipped stems in flower jars, which fade away after a week or so, but that only leaves me with either a card or candy.

For years, I was able to breeze by on the assumption that I could get away with murder by giving tribute with a self-made card I created myself, without having to splurge any money on an actual merchandise-driven Hallmark card. (That, and I was notoriously cheap, and looking to save money in any corner possible) However, these cards were not to be considered shoddy knock-offs of the original material - they were to be comic-designed masterpieces with running commentary throughout them. I can never create a story unless it makes a point of some kind. 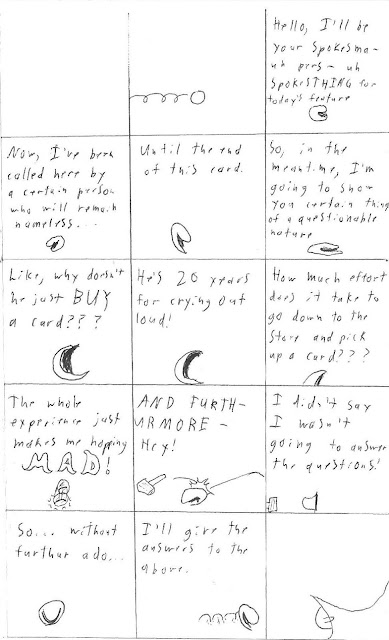 Depending on the subject material, or whatever theme was happening at the time, I would base the conflict within the card in related context, such as when we got rid of our old refrigerator, or had to move multiple heavy boxes. Most of them were family-based in-jokes, that would only make sense in context, though I would still try to create them so anybody could understand them. Another obstacle is that it's very difficult for me to reread my old material, since I worry that it won't live up to my unusually high standards, and I'm extremely embarrassed with what I've written. (Though pretty much all artists and writers are their own worst critics) 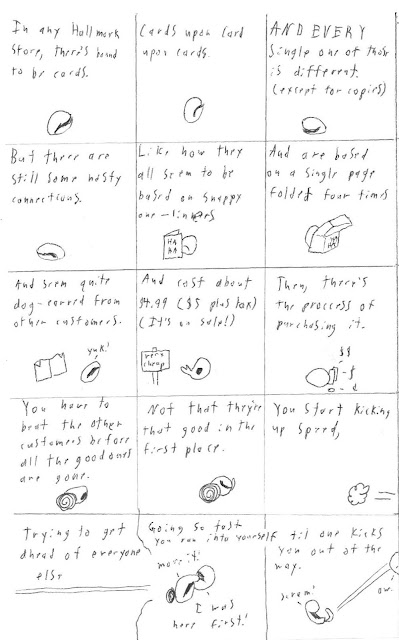 If the text looks difficult to read I apologize. My handwriting has always been extremely messy since I was little, and hasn't changed, unless I'm concentrating hard. I generally hold my writing instrument between my thumb and middle finger, resting against my ring finger, with the base of my palm lying against the paper until I reach the end of my word, then move back until I'm finished. This is why computers are a Godsend to me, since I can concentrate on the message, and not worry about how sloppy my handwriting looks. 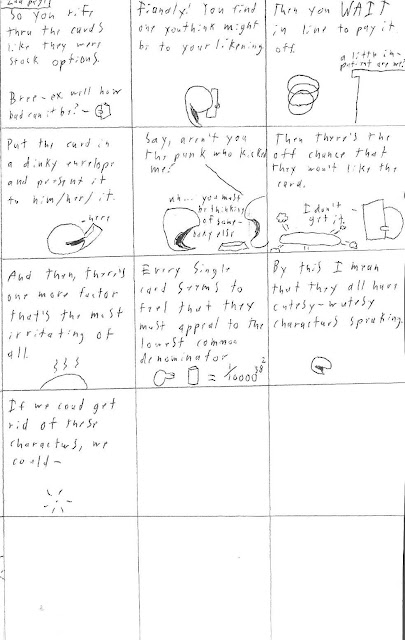 The punchline to this was something I stole from a Ren & Stimpy comic, where Ren was shaking the TV screen after trying to play on his Yak fundraiser sympathies using a teary-drenched nonsensical song. References like these completely flew over their heads, and I never intended for anybody else to see them, until they popped up after a bout of cleaning up the office, where old obsolete papers were kept long after their relevance had passed. 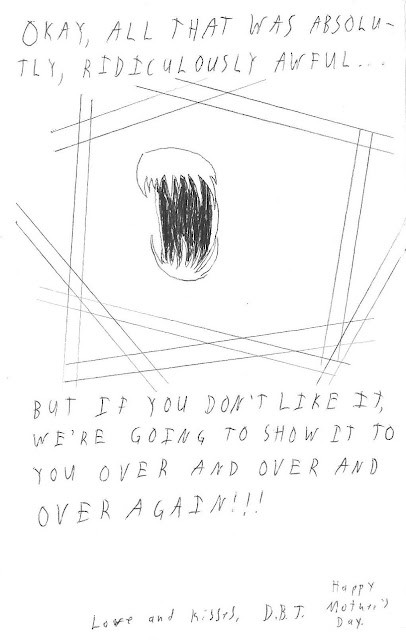 As amateurish as this attempt was, it's nowhere as impressive as my first attempt, drawn on a large leftover piece of paper for a College project which had over 60 panels of the talking ball talking to himself on the dilemma of having both celebrations being so close in approximation to each other, to which he proposed an announcement that after a hefty deep breath, on the other side of the page was him shouting through a microphone, "HAPPY MOTHER'S BIRTHDAY!!!". Sadly, since it was larger than the other cards, it was presumably recycled and lost to the ages.

In later comics, I would increase the cast with the addition of an ostrich who had a beak very much like Cyril Sneer's, and would use his legs as arms. Even though he was never named in any of them, I always called him Scritch. (I had no name for the talking ball, which I designed as a kind of idealized version of myself) This gave the ball somebody else to talk to instead of monologuing, as well as a potential antagonist to spur him on and allowed for a slightly wider range of unusual comic tricks, such as having Scritch's fluffy body be replaced by a word balloon, or his 3-toed legs resembling fingers. It also gave me an opportunity to stretch what little drawing skills I had. 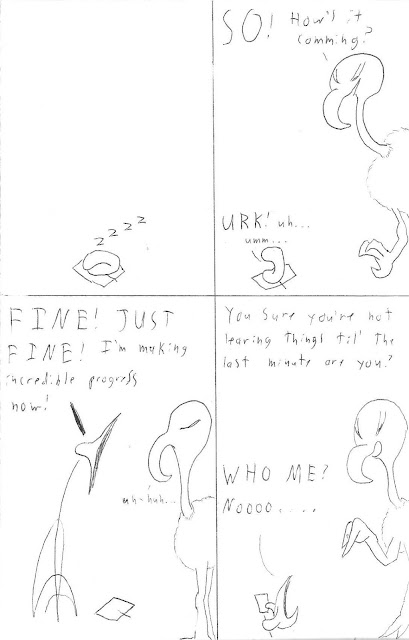 However, due to lack of practice, I gradually found it increasingly difficult to draw the ornery bird in relation to the panel. If I'd bothered to draw more than two times a year, it might've not been so hard, but drawing is not really my forte. (That was more my sister's field) I never bothered making a sketch beforehand, because I couldn't stand the screeching scratch of pencils on paper, which always sent shivers down my spine. Ironically enough, I was resistant to using pens in grade school, because I didn't want to lose the opportunity to erase mistakes, and once I found I preferred the sleek movement of pens, it was extremely difficult for me to go back. Recently, I've found I prefer pencils with soft lead, which helps resolve my dilemma somewhat. 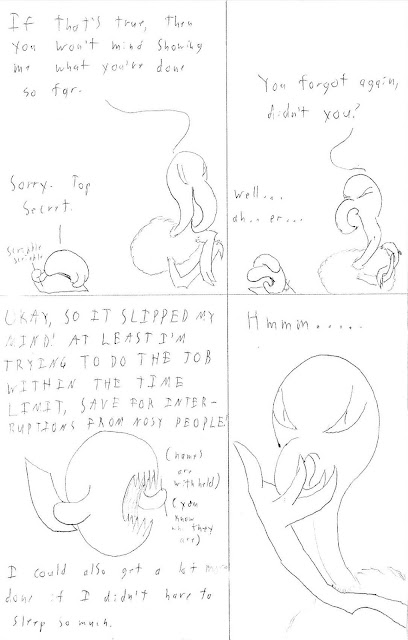 For some reason, my scanner is having a difficult time giving a clear image of the 3rd page here. No matter how many times I scan it, it comes out looking faded, even though every other page looks fine. It'd probably look clearer if I photocopied it, but I don't have one handy. Hopefully, it should be clear enough. Hopefully I'll replace it with a clearer image in the future. 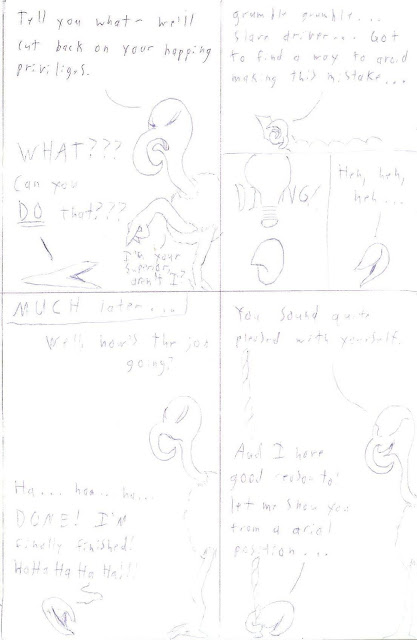 In case it's not clear here, there's 100 cards in the form of the spelt out celebration words, "Happy Mother's Birthday!". I can't remember if I counted the number of strokes I used or not, though it's likely there are duplicates. 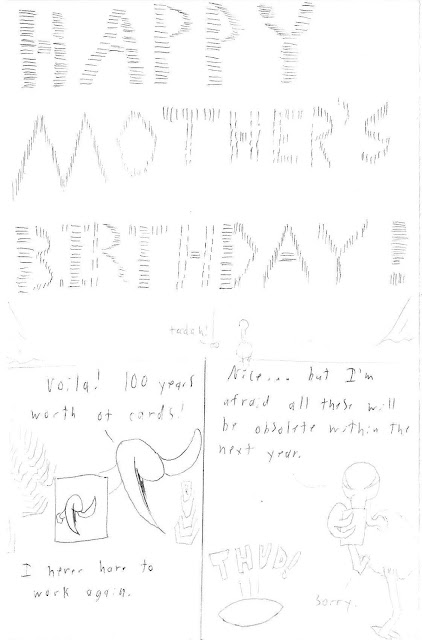 Even now, having devoted today's blog entry for my mother, I still have no idea on what to get her for her birthday. Short of buying her an actual fancy cake, and cleaning up the place, I'm pretty bereft of ideas.
Posted by DeBT at 11:51 AM