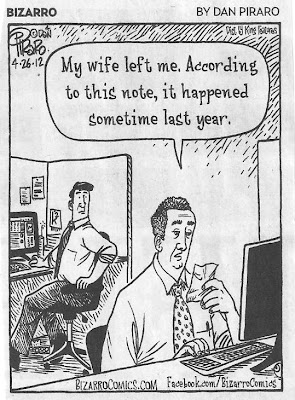 I rather liked Thursday's Bizarro comic, since it certainly reflected on a certain trait of mine - I have a notoriously bad memory for things that aren't written down. Since I'm deaf, I have a terrible auditorial memory. Things literally go "in one ear and out the other". I much better remember things if they're written down instead. I live among the way of thinking that "If I don't see it, it doesn't exist". This is further impounded by my daily experiences, when I'm introduced to who I think are new people, and then I'm told that I've met them before. I practically forget anybody I don't meet regularly over a two-week period, and am constantly amazed that there are people who can remember someone they haven't seen in years. I once did a presentation for a teacher who hadn't seen me since kindergarten, and she said she recognized me from my eyes alone. Considering that people's eyes don't change much throughout their lives, it's certainly a handy reference, but I'd still find that an insurmountable challenge. I'm usually too focused on the person's lips or face, and the outfit they're wearing. If they change their clothes or shoes on a regular basis, I'm in big trouble.

Getting back on topic, I have a tendency to leave lots of scraps of paper containing my notes or story ideas lying around, which doesn't sit well with my residents, since they're forever complaining about my creating a mess. But I thrive under these conditions where I have multiple concepts strewn about in a seemingly haphazardous manner that's actually an organized mess of spontaneous creativity, and can combine two ideas that normally wouldn't be considered otherwise. (This is mainly the inspiration for several of my mash-ups I've done) When I can see certain visual reminders, I don't have to struggle to keep every single thought running in my head reminding me to do certain things all the time. I used to keep a post-it-note at the front door to remind me to turn off the outdoor lights if I woke up early, but it was taken down because it "looked ugly", and I eventually forgot about it. 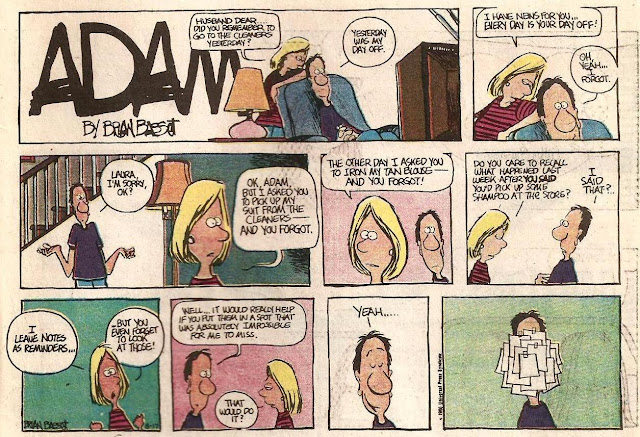 Alternatively, when I don't see some notes after awhile, when I see them again, it jogs a creative bank in my brain that fires it up for potential possibilities. One such example would be a single sentence consisting of "Midas = Pt", which inspired the following story below:

The God who’d granted the king his wish saw his torment, and popped out from wherever he’d been hiding and watching the king in the first place.

God: (amused) Well, are you enjoying the gift I’ve bestowed you?
King: (despondently) Not as much as I thought I would. I’ve never realized how garish so much yellow around the palace looks.
God: (factual) Well, that’s the price you pay.
King: In addition, I'm going mad with hunger, because everything I pick up, even with another golden instrument turns into gold the instant they touch my lips.
God: Well yes, you didn’t exactly specify on any restrictions or limitations for your wish.
King: To make matters worse, my powers wound up alienating my entire staff and family, save for my daughter who stayed behind, only to turn into a solid gold statue right before my very eyes.
God: (annoyed) I already know all this. I saw it happen. I’m offering to -
King: And with so much gold around, it’s actually driven the value of gold right into the crapper. I now realize that there are more valuable things on Earth than just shiny yellow metals.
God: (Impatiently waving hand) Yes, yes get on with it. What do you want instead?
King: I want everything I touch to turn to platinum.

A few days later, there was a castle made entirely out of platinum with a platinum throne containing a skeleton with platinum robes, staring at a statue of a platinum girl. For some reason, the smile on the skull beneath the platinum crown looked content.

The flip side of this strategy is that I'm notoriously nervous about reviewing my notes because I'm nervous that any of my old writings or ideas might not be as good as I thought they might be. Also, there's a LOT of stuff I've written down, and it's somewhat of a struggle to go through all of them, because they're so personal. If I read a particularly emotive sentence, I'll have memories of what I was thinking when I wrote it, the emotive state I was in when I wrote it, and the event that influenced it. I can't remember people I've met a month ago, but can remember the psychological state I was in when writing something. It's a lot to take in all at once, and I have to dillute it through a strategy of winding down by pacing around the room, preparing a little snack, or watching a show I've taped. Practically any procrastination skill that'll keep me from going over my old stuff.

Usually, my first outlet for avoiding such deeds is the addictive allure of V-games. The adrenaline factor I get from trying to collect everything and get 100% scores is the only thing that makes me feel truly alive. So far, Angry Birds is the first Video Game I've played that actually makes me want to procrastinate myself to do some actual writing. The puzzles are so touch-sensitive and repetitive, that it's actually counterproductive into convincing me to keep playing that I want to do anything other than destroy every building block. Savestates would be a bigger help into keeping me playing, but I'm not sure if I'd want to bother.

A better motivation for spurring my creative juices is having a deadline to produce such works at a time they're available. Another is having a specific topic to work from. All I need is a little push in the right direction and I'm good to go.

Of course, this system of having everything in plain sight has a certain drawback. Being constantly surrounded by the covers of my favorite books means that I'm constantly reminded of what the contents are. I already know what the punchline will be before I even get to the end. However, my memory for newspaper Sunday comics only peters out at 1996, when Calvin & Hobbess retired, and the number of readworthy comics in the paper continually declined. The best way for me to be continually surprised by a story I've read is to hide it somewhere out of sight, then come across it again unsuspectingly, reread a relevant passage I'd somehow long forgotten, and be pleasantly surprised by the results. 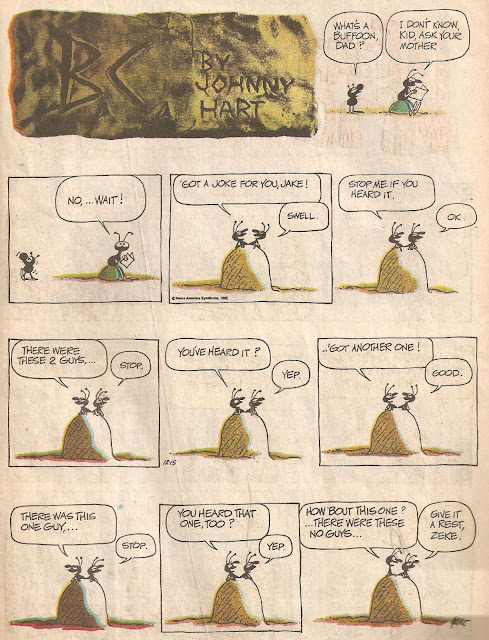