Ripped From the Headlines

On Thursday’s Doonesbury, there was some confusion regarding Roland Hedley’s tweet of his point bulletin sound bite message where he was giving up-to-date accounts of what was happening in the region he was in. A trait that has gotten lesser reporters in trouble for alerting troops where they were going to attack in advance to the media. (Thus giving their targets time to readjust their strategy) EDIT - just remembered it was Geraldo who did that during the Iraq Gulf war. This reminded me of a certain duo of Sunday comics that I was naturally confused by.

On one side of the page, I had a Cathy, which ended with an unseen sound effect from behind an elevator. 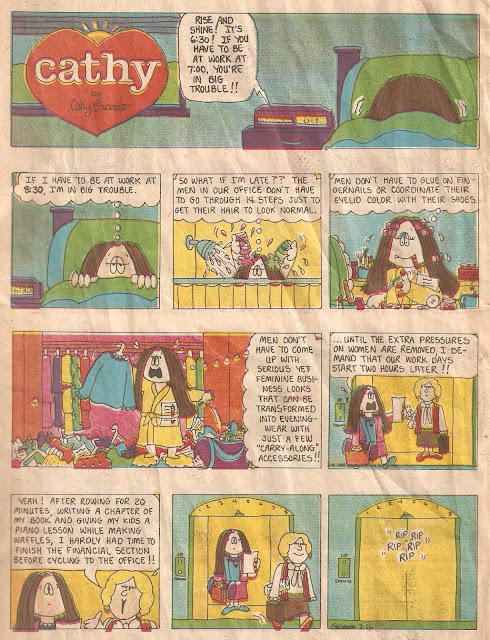 Coincidentally, that very same sound had a very different meaning for the throwaway panels in Adam right across the very next page. At the time, I didn’t know that RIP could be abbreviated for Rest in Peace, and thought it meant that the milk carton should be torn up and thrown away. 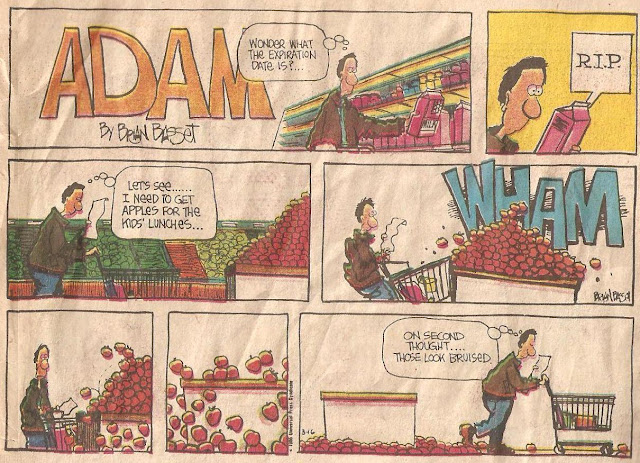 Still, this was a very rare occurrence of two completely different strips having a common element at opposite sides of the spectrum - one at the beginning, and the other at the end, somehow (but not quite) linking them together. I often make a big show off how cartoonists lift ideas from each other, but this kind of synchronicity is probably almost impossible to accomplish nowadays.
Posted by DeBT at 8:35 AM