Growing up, I was introduced to various children's magazines that I looked forward to every month. Some, like Sesame Street and the McDonaldLand's Fun Times I threw away once I outgrew them. (Nowadays, I'm still regretting having done so, because I'd like to see them again) Others, like Chickadee, Electric Company, (and later Kid City) I still kept because I had fond attachment to what I read in them. Magazines generally have a shorter shelf life than most, and that's kind of a shame, because there's occasionally some imaginative concepts and drawings that simply aren't collected anywhere else.

In Electric Company, it wasn't unusual for them to have 2-page articles focusing on various comics I'd never heard of. One such example was of Ask Shagg, an edutainment strip that answered various questions involving animals. 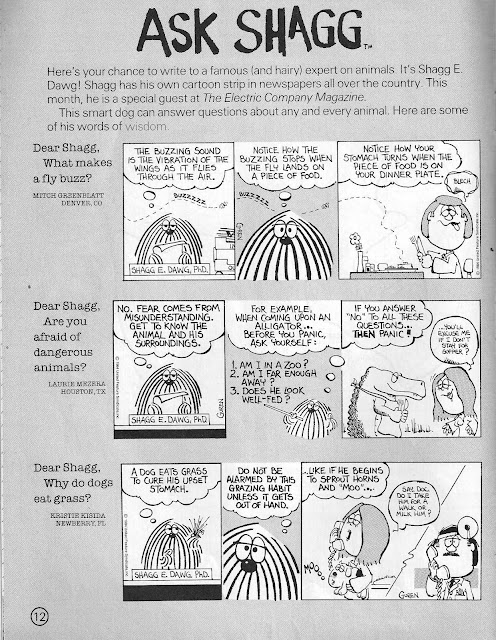 I don't know about you, but I think the deadline's kinda passed for submitting any entries to Electric Company headquarters, though there's still an online forum if you've got any questions. One that won't be answered is why the official site doesn't seem to be working, while the fan site is. 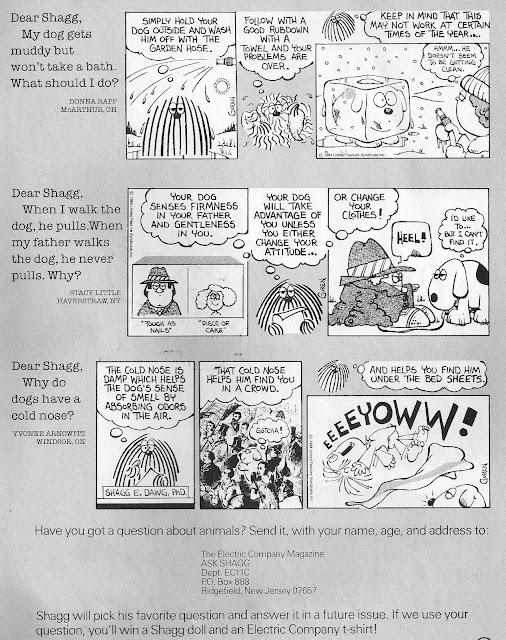 The magazine even had a tribute to the Upside Downs of Gustave Verbeek, even though they didn't use the Black & White images from the actual book in question. 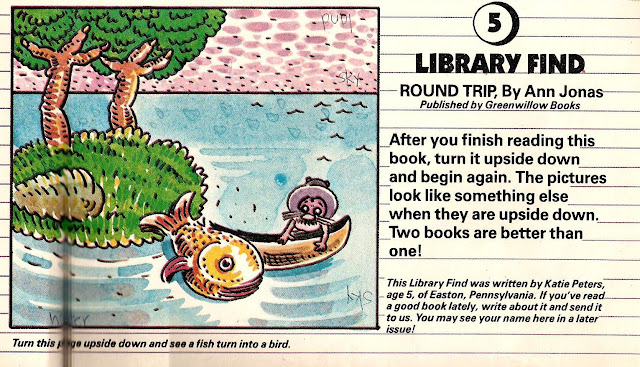 Instead of MAD's fold-ins, there were Fold-its, which took a slightly different take on the concept. A single page would be shown, presenting a perfectly normal scenario... 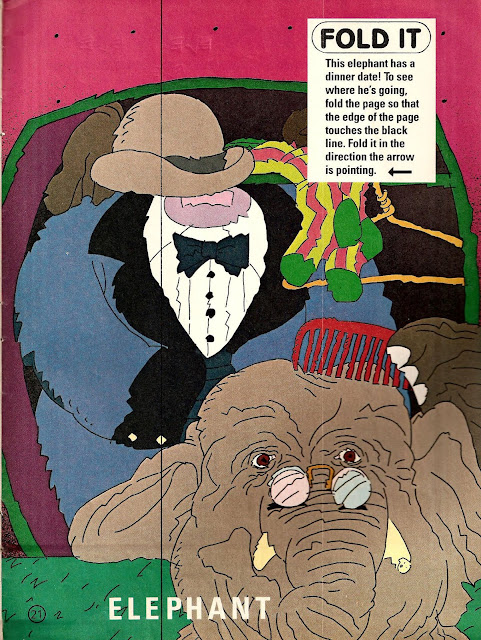 ...until it was folded in from the image and letters on the other side of the page. I've combined both pages for a more complete picture. Also note that there's some filled in blank words relating to the subject in question. 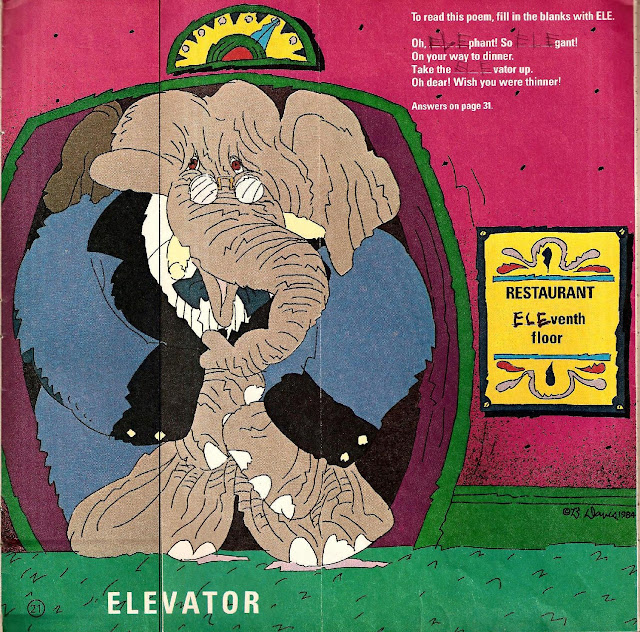 Like so many people, Electric Company was my very first introduction to the world of Spider-Man, and this particular issue was quite ambitious in showing a wide selection of the various villains that populated his world. 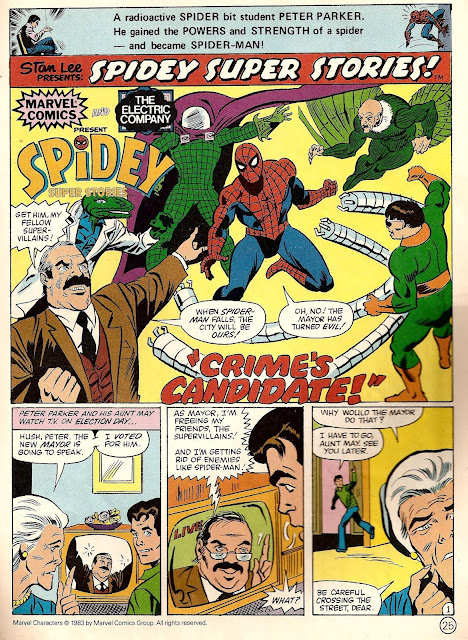 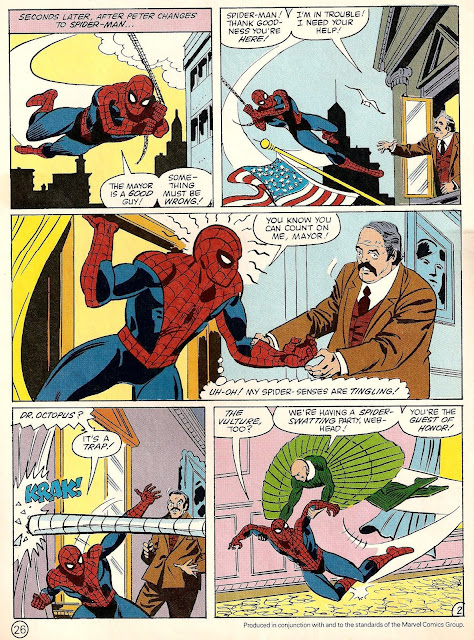 Of course, at the time, I had no idea that actual Spider-Man comics existed outside of this magazine, and thought that all S-hero comics were typically 4-page long serials, with quick resolutions to their hackened plots and just further bolstered my assumptions that S-hero comics were disposable garbage. (Whether this is still true nowadays is still up for debate) 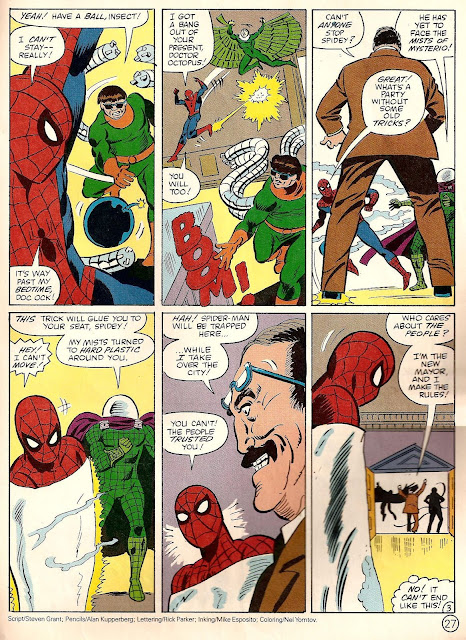 I've always been perplexed as to why the most commonly reproduced section of Electric Company comics seem to come from Spidey Super Stories, which are even more simplistic and stripped down versions lifted from the TV series, when the samples here seemed to be of higher quality. One of the few online searches I found had the full version of Spidey's origin story I was more familiar with. 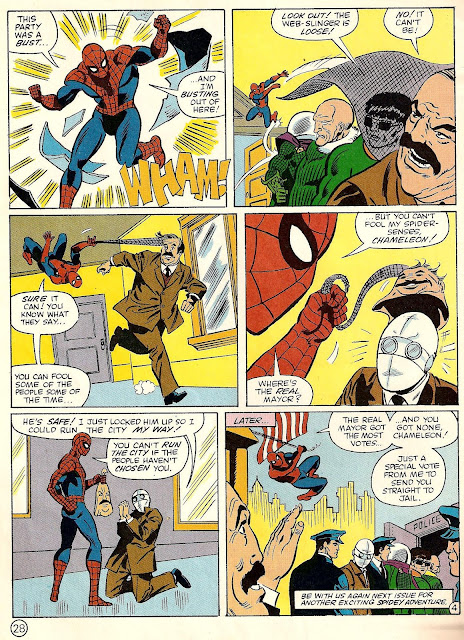 Another monthly tribute would be a Make Your Own Cartoon, which was basically a children's version of "choose your own caption" that would later be picked up in The New Yorker. The difference being that unlike being a subtle incomprehensible reference, these entries were more likely to be quick punchlines typical of tickling children's funny bones. 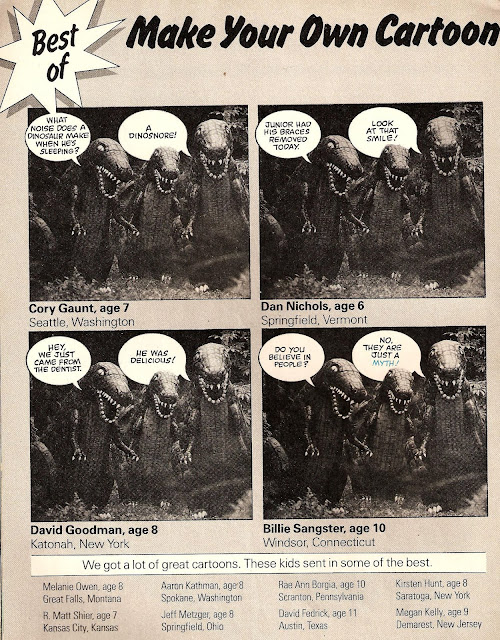 You may have noticed that there have been various coloured words in some of the pictures shown. These are chosen advanced words that were considered too difficult for elementary children to understand to expand their vocabulary, and would be further explained at the end of the Magazine, with some additional comics explaining what each meant. Of course, anybody worth their salt would be able to understand the meaning behind those words when used in the correct context. Saying something like "His anatidaephobia was really bad" doesn't really help explain what anatidaephobia is. 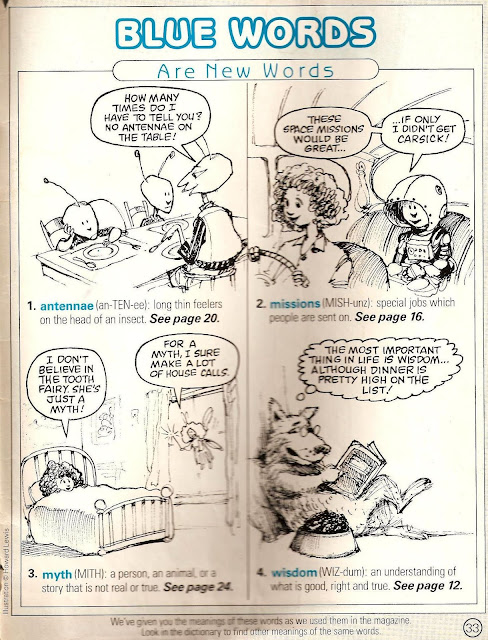 Personally, I felt that the decline of Electric Company started when they stopped doing any more comics that appealed to me. When the number of comics declined from 2-pagers to 1 pages, and eventually dropped off altogether, I finally cancelled the magazine out of disappointment. If I wasn't going to get my comic fix there, I would have to look for it elsewhere. Unfortunately, the only available choices that appealed to my tastes were too childish, too different and too far between. It wouldn't take until the availability of Manga exploded before my purchasing habits suddenly changed.
Posted by DeBT at 11:33 PM