Year of the Bears 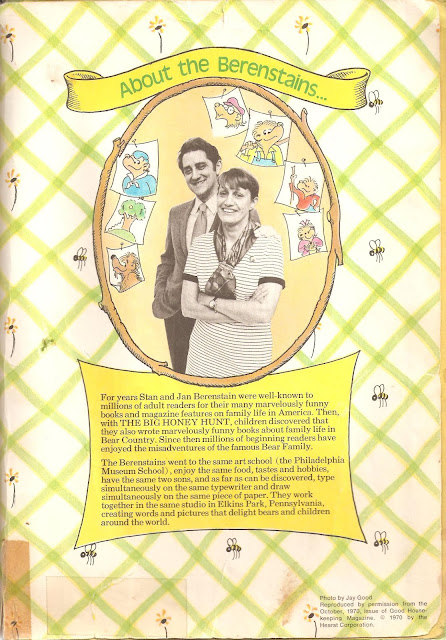 Jan Berenstain died earlier this week of a stroke after continuing the writing duties left by her husband Stan, who died in 2005. Stanley and Janice better known as Stan and Jan Berenstain were prolific children's authors who produced an astonishing amount of books in their lifetime. I remember that one of the stories that they though would never get animated was "The Berenstain Bears and Too Much TV", which with its message of "turn off your TV, get off your duff and do something else" would be totally counter-intuitive with their sponsors who would insist on their audience paying attention to their commercials. Amazingly enough, this episode DID get animated, but for the 2003 show, not the 1985 show, which some old fans still prefer.

Everybody's feelings about when they start to outgrow their childish interests vary, but for me personally, their quality decline started with "The Bearstein Bears and Trouble with Pets". The other books released a few years back weren't BAD per se, but they lacked the creative spark that their earlier books had. In essence, once the Bears started catching on, Stan and Jan became factory outlets, producing material, no matter if it was good or not - their built-in audience would gobble it up nonetheless. It's always a disappointing experience to see a beloved franchise literally disintegrate before your eyes, as fans of various Mangas and Cerebus can atest to. (I'm still sore that the McDonaldland Fun Times magazine started becoming more slipshod in their covers and contents even though I no longer go out for eats there) There was no need to update the Big Honey Hunt when the old cruder illustrations still had enough charm of their own. 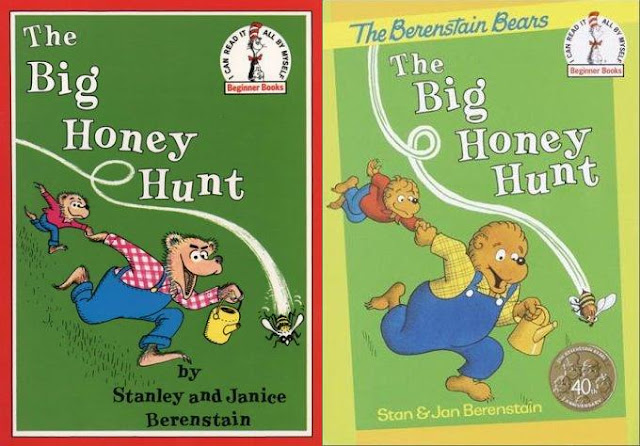 What I'd really like is not a continuous reprint of the later years, when Stan and Jan were struggling to come up with ideas that would relate to (ironically enough, considering the nature of the Bears) Nuclear families, and artwork that looked less polished compared to earlier printings. Particularly the oversized Berenstain Bears Almanac, Nature Guide and Science Fair books, stuffed with all kinds of rhyming trivia. Even a children's book reviewer who normally loathed the Bear's newer books, but tolerated them because her son loved reading them. 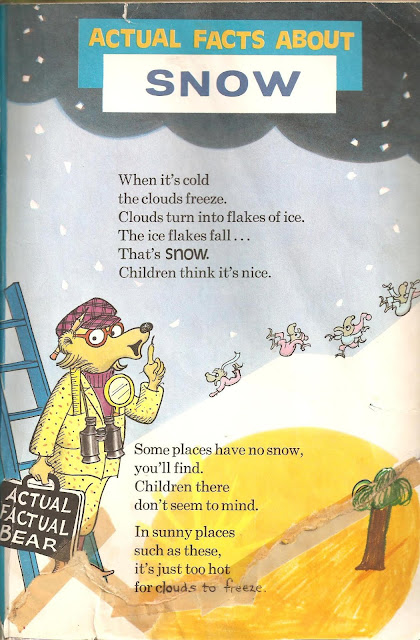 I have a particular fondness for the Bear's Almanac, especially since my Mother went out of her way to rescue it after it was going to be thrown out of the library. There were a few torn pages, and it was literally falling apart, but nothing that a little tape and rewrites could solve. (It wasn't until I saw an extra copy at a school library that I found out there were bears on a beach near a palm tree, which hadn't been included in the illustration) 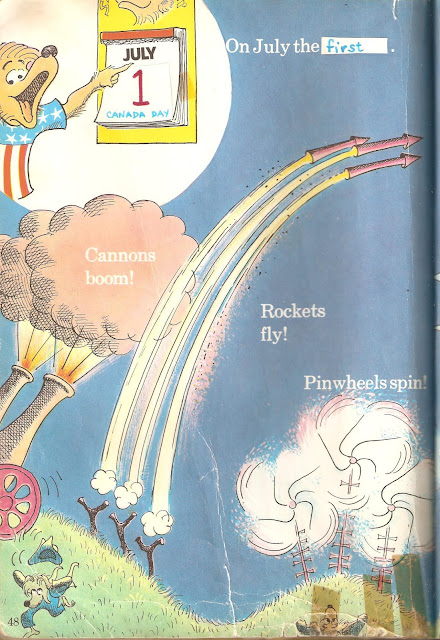 What's particularly interesting is the "revisionist history" that's done for a few holidays. Since so much American media were threatening to confuse the cultural identity of Canadians (having very few successful commercial outlets of our own), we had to struggle to make our mark known, so we wouldn't be too confused when given conflicting messages. It's one thing to be told something, and another thing entirely, when you see something yourself. Especially if 99% of the source of your information comes from reading, and you have a terrible auditorial memory. What are you going to trust? What you hear, or what you see and read? 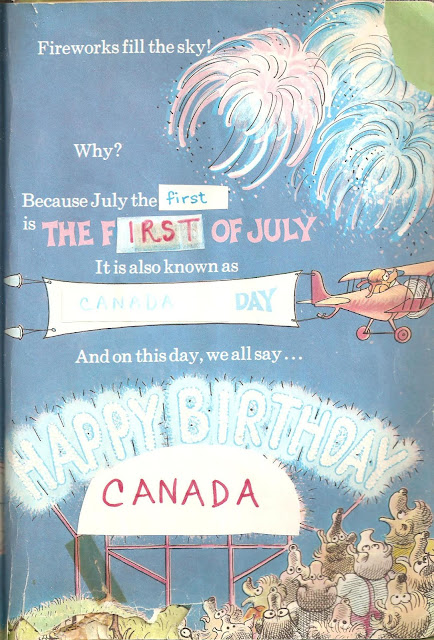 Therefore, unconvincing edits were added to the page, even though it ruined the rhyme. (For the curious, the original stanza for the above is "U.S.A.") Of course, my mother's attempts to preserve cultural identity failed to change Brother Bear's stars & stripes shirt to a red maple leaf. Her photoshop skills could only go so far. 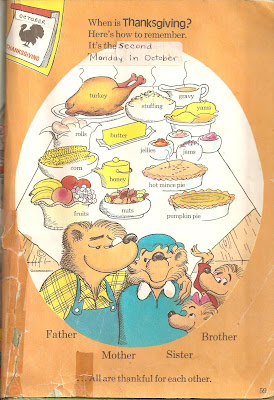 The other instance was where the Bears celebrated Thanksgiving. Like the July holiday, Thanksgiving isn't as important as it is in Canada compared to the big kerfluffle it's given in the States. Since Canadian Thanksgiving is more about celebrating the end of harvest season, it's importance is faded away in the background with the arrival of Halloween, and thus, we're spared the triumvirate of three holidays at the end of the year. We're given a reprieve for a month before getting to celebrate Christmas (or Hanukah, Kwanzaa or whatever December holiday you celebrate). 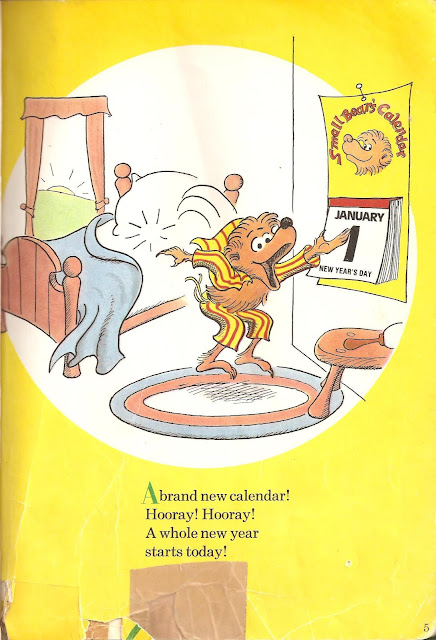 It's this beginning page that I have the most fond memories of though. Back when I was still learning how to talk, my sessions were being taped to give proof that I could speak, and thus be eligible for oral education. When asked to tell the story, I started out by repeating the the words on the page in blunt monotone, each sentence being recited with minimal effort. It wasn't until I was stopped and told to act like I was actually there that I changed my tune and started talking animated and excitedly Since then, I've taken the lesson of varying the sound of my voice to express my moods and haven't stopped. (Well, except for when I'm in one of my black moods) 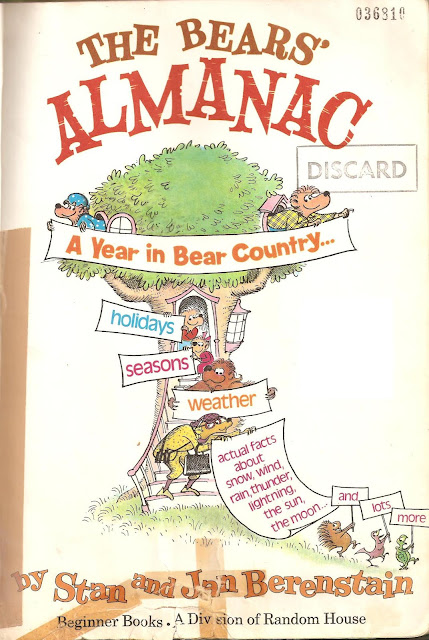