It’s quite a coincidence that today’s Pooch Café has a strip about a dog walker relieving her stress of being with Poncho through art therapy. For the past three months, I’ve been going to art therapy sessions every Monday. (We just finished our term this week) Originally, I wanted to aply for a creative writing course, but since it’s not considered mandatory, I couldn’t get an interpreter present, which would hinder my enjoyment of the class. The art therapy was given to me as an alternative. Initially, I was rather hesitant, since my art skills isn’t exactly my strongest point, and never quite rises above stick figures.

This last project was where we were to give our overall impression of the art therapy, and I did it in the form of a bar graph. If you look closely at the left hand side, you’ll see that the line doubles back several times before venturing out a bit, then gradually becoming more bolder, doing elaborate designs, though there are a few low peaks, and the whole thing starts tapering out near the end with one final flourish in the form of fireworks. Truth be told, I was beginning to grow a little tired of the whole thing, and was kinda relieved it was over. 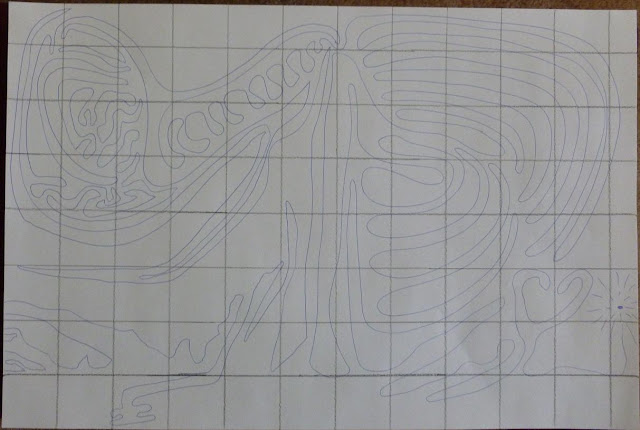 Part of what worried me at first was that I had no confidence in my drawing ability. Even though I was told that it wasn’t the actual quality of the work that counted, but the intent behind it, I was still too much of a perfectionist to ever want to apply for something I wasn’t good at.

Fortunately, I needn’t have worry - our first assignments were to create a poster out of magazine clippings. My first instinct was to organize these clippings into their various subjects - animals, kinds of animals, technology, people, backgrounds, etc. but there were too many of the dang things, and I had to abandon it for future reference to concentrate on my own project. 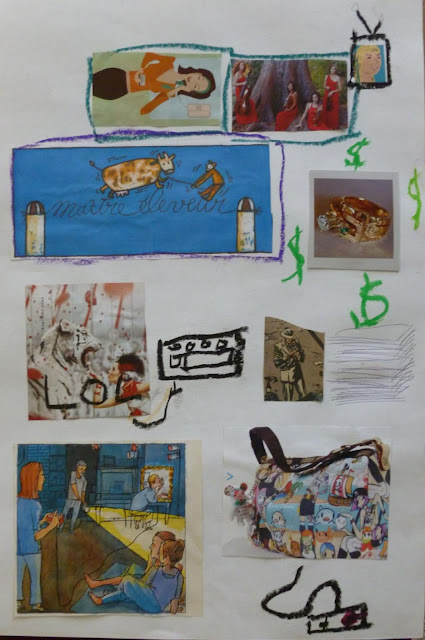 This was a consistent occurrence - I had to improvise in order to find suitable art shortcuts in order to show the point I was trying to make. One of our first assignments was to do a portfolio of things that calmed us down. I had great difficulty in finding a picture of a computer or video game monitor that I recalled being buried in the great stack of available photos. (Turns out somebody else had already chosen the very images I intended to use) since I couldn’t find an approximation for a computer, I used a picture of albino circus tigers, hastily added a very badly drawn keyboard, and put the letters LOL on top to represent LOLcats. (I told you I was pressed for time!) In addition to the various TVs on top, I also had a ring surrounded by dollar signs (having money), a stack of comics (next to a private dick), a Ben Kachor picture, and an Anime-influenced handbag connected to a NES controller (even though V-games drive me nuts, they're the only thing that make me feel alive). 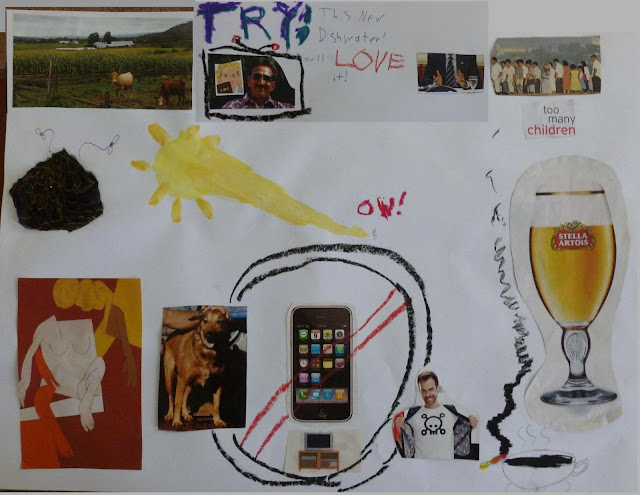 The flip side of this assignment was doing one of things that stress me out. This one I entered with great enthusiasm, since there’s nothing I enjoy more than complaining about things that bother me. In order from top to bottom, there’s nature (hence the cows), trying new things (a commercial for a new product. “TRY! This new dishwater! You’ll LOVE it!”), wearing a suit & tie, little children, crowds, being poor (flies going in and out of a wallet, not a dung heap), the sun in my eyes, being unable to control my body, dogs (from a bad experience while collecting money on a paper route), not using computers (a compliance line [yes, I know it’s backwards] through an iPod, the closest representation to a computer), fear of death (actually pretty low on my list of fears, since once I’m dead, all my problems will be over, but decided to add it in), beer, coffee and cigarettes (stimulants that wind up riling me up).

I always had a tendency to put more detail in my work than other people's. Yet I was still envious of the select few who could actually draw with a pen and paper. If there is one constant, its that I enjoy putting things in order. Well, other peoples stuff. My own? Not so much. In this project, we were to rub wax on the paper first before putting paints on the page to create a kind of visual aftereffect. I didn’t know what the actual results were supposed to be, so after I found out later, I tried to rub wax on the black part in the middle. However, the result was tearing a hole in my work, so I had to abandon my attempt at creativity. 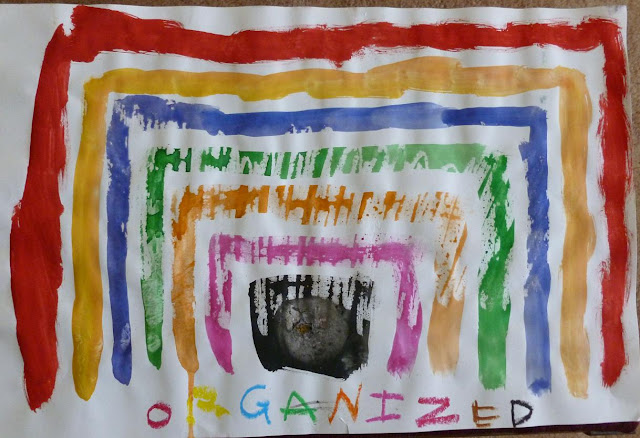 One of the group’s favorite projects overall was where we were to combine various clipped-out words and sentences, and arrange them into any kind of order we wanted. I do SO enjoy putting together common themes from different elements, as my Garfield remixes can attest to. I entered this with great relish, coming up with not one, not two, but three different sentences, each one focusing on a certain theme. 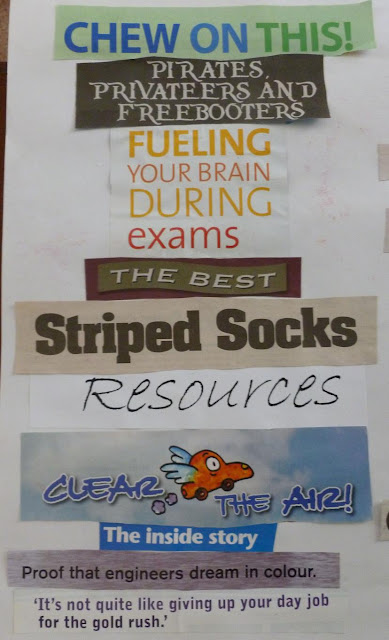 The second one was just something I put in together from a few sports metaphors to fill in the space in between. (For further details, the car in the middle is missing its tires) 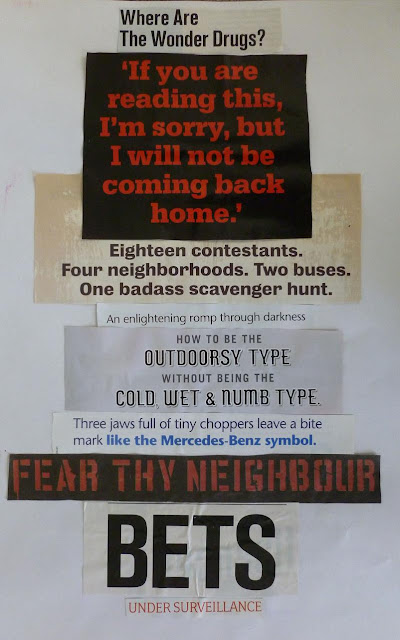 The third one was a thinly veiled reference to Battle Royale (I'd been reading the Hunger Games), and how Survivor-like shows can force desperate people in need for publicity to drive to ever more escalating stakes in order to get a little attention to themselves in order to fuel their private obsessions. 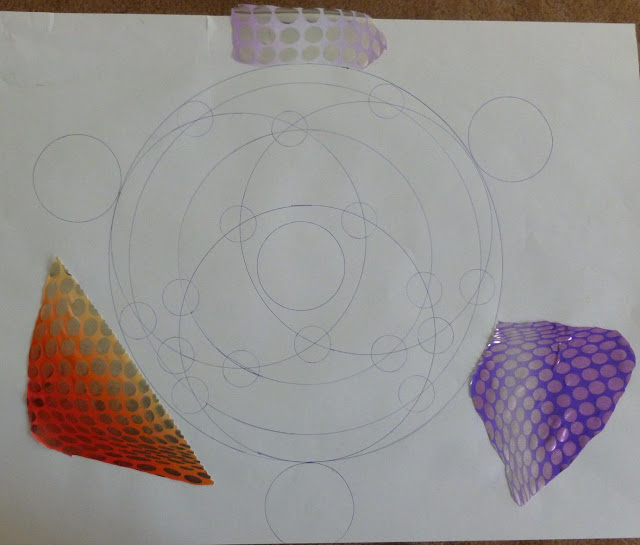 The one I’m most proud of is where we were to do a visual representation of the inside of our brain. For this, I used a collaboration of Venn diagrams, each link having their own circle of experience, and making connections with other larger circles in the field. I added the cloth patterns at the side for visual effect. It’s just a shame that the paper wasn’t large enough to contain the missing half of one of the “outer circles”, but I made up for it in my second diagram. 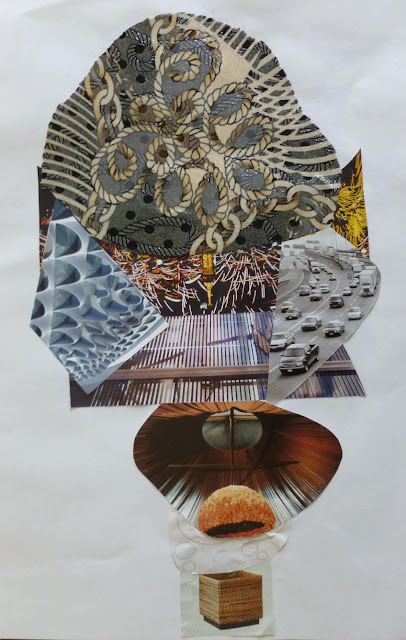 Actually, I wasn’t quite satisfied with my second attempt, because it felt like I was beginning to repeat myself. The looping tangle of knots, the highway of information and various other lines all converging to a singular cerebral point, which was contained within a tiny container. As I often like to say, “I don’t just think outside the box, I AM outside the box.” 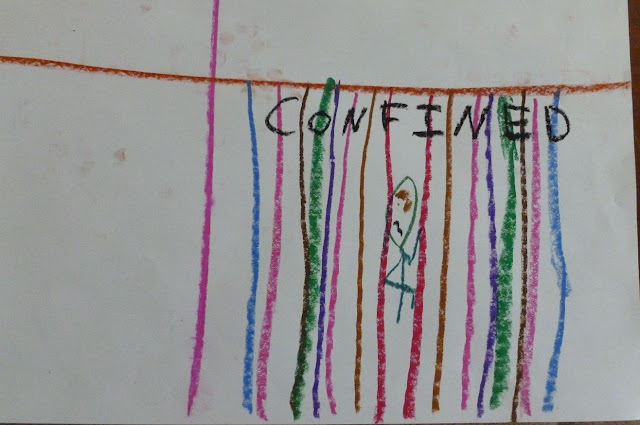 However, it wasn’t all fun and games. There were several sessions where I was feeling very down and didn’t feel like creating anything. This one was after I arrived late, and was playing catch-up with the warm-up exercise, which was to create three random emotions, and the last one was to represent what we were feeling right now. I didn’t have time for the first three (couldn’t think up one anyways), and only concentrated on the last. At the time, I was feeling constantly restrained, that my activities and lifestyle were under constant scrutiny, and there was no hope of escape. Everything I did was under suspicion or observation, and nothing could escape notice. This feeling of oppression was further compounded with my next project: 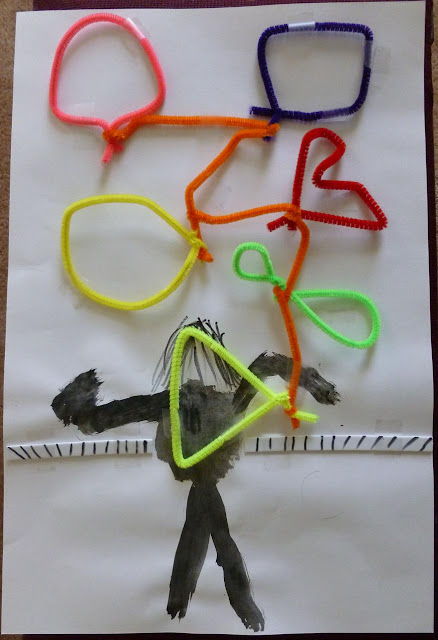 This fairly innocuous-looking diagram of wire frames was actually the result of one of my major emotional meltdowns. We were supposed to imagine what would happen if we woke up one day and found ourselves into a world that was utterly to our liking. Upon hearing this mandate, I underwent a severe state of depression, and didn’t feel like continuing for three reasons:

1. I was unable to give an adequate vision of what my perfect would would be like with the available materials.
2. It was a HUGE project, and any attempt to show ALL the necessary details worthy of replicating my ideal vision would fall short in the limited time span I had.
3. It would just further serve to show just how far removed my fantasy life would be from reality. The prospect of creating something perfect that could never be was too depressing for me to comprehend. Besides, if any of us actually woke up in a world where everything went our way, we would be beset by paranoia.

Eventually, I was talked down into limiting the scope of my vision to a specific job I would like, which was to be a writer, overlooking various projects. Hence the conductor in charge of an orchestra of various multicoloured windows, all being controlled by his keys. (Upon further observation, I should’ve used multiple keyboards, as benefiting a church organ)

Overall, it was a unique experience, though I would prefer to concentrate on my writing, and wouldn't object to joining a writing class.
Posted by DeBT at 1:05 PM