With all the hooplah over Newt Gingrich's self-imposed portrayal of "family values", I'm surprised that no one's bothered to remind the public about the man's past behavior when Gingrich was dealing with his own martial problems around the same time he was attacking Bill Clinton for having "relations" with an intern. Remember, this is the same man who believes in not allowing gays to marry because it would threaten the sancity of marriage. 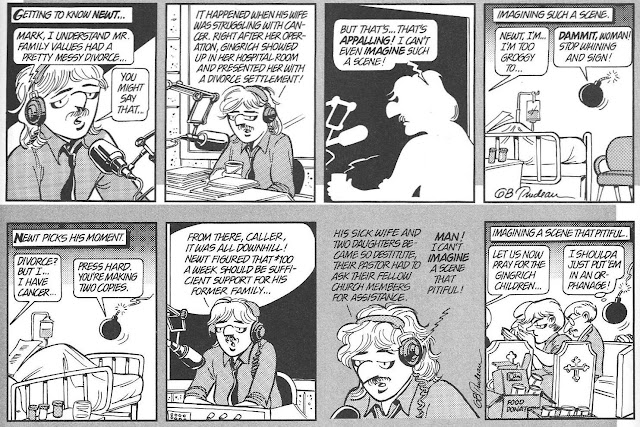 There was a time when Doonesbury was cleverly written (if boring) satire of current events, but lately, it's become somewhat lackluster compared to its heyday. I was always disappointed that Gary Trudeau never portrayed Obama as a stethescope back when he was championing for Health Care. Heck, even a floating medical light would've been preferable. Now Obama's regulated to the corner of invisible Presidents along with Jimmy Carter, because he's become too intangible to portray. Even Feiffer couldn't manage more for the latter than a floating cloud in the form of a smile.

So with a flagging Democracy who's supported the SOMA/PIPA bill (before it was shot down due to an internet blackout*) because they were getting backing from Hollywood sponsers when no other corporations would bother sponsor them, it would be high time for the Republicans to make a strong stand and portray themselves in a flattering light. (While diverting attention away from their biggest supporters)

Only problem is, of the two representatives who've bothered to gain enough support and media hype, neither Newt Gingrich or Mitt Romney are suitable candidates for the head of the party. Their actions and manners have been regulated to shouting matches, and the whole result is so embarassing that I don't even want to look. The whole point of a debate is to present a proper counter-argument to an otherwise convincing soundbite, not to let your opponent self-destruct on their own issues alone. Where's the sense of fighting and fair play there? I'd rather have a worthy opponent defeated by reasonable logic rather than have them self-implode from their own inepitude. It's cases like these that make the other side look good by default, and that's no way to run a country. Similar to how it was better that Hitler was kept from being assasianated, because doing so would've made him a martyr, and he was already doing such a good job self-sabotaging his own plans, the allies felt it was more benefical to keep him alive. So too do the Democrats come out ahead by letting these two hotheads fight over similar territority.

What's strange is that for all the outrageous misdemeanors and deeds that they've done, people still feel that they're the best choices, because of their name recognizeability. (The worst part may be that Sarah Palin wouldn't even rank among the worst choices) But considering the amount of damage they're doing to their brand name, you'd think they'd rethink the whole "no publicity is bad publicity" angle.

Or maybe it's not that amazing after all. Like Doonesbury, MAD was capable of producing timly comics that could remain relevant years later. I don't know when this was published (probably around the S & L scandal) but it's still timely today. 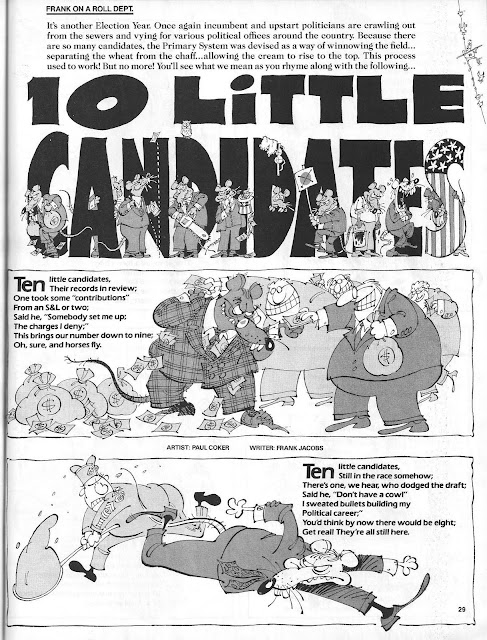 It'd be hard to read all these descriptions and not have a name come to mind. I was planning to post these later this year, but the recent insanity of the campaign trail has has forced me to show this earlier than I ever thought. 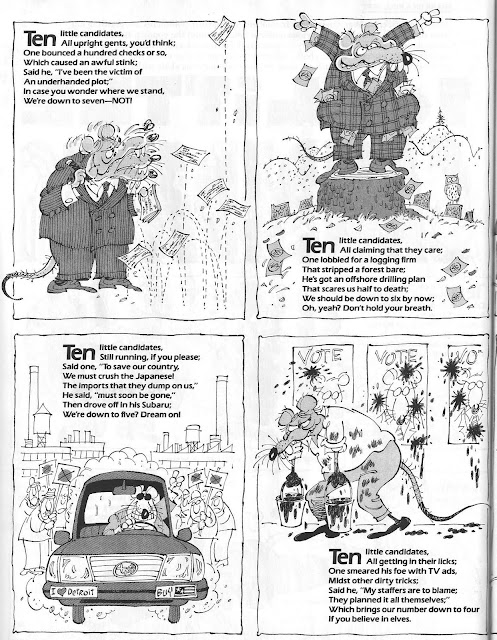 A minor artistic quibble - I was often confused when I saw that the rats behind the title letters didn't quite line up with the lyrics. The first four were exact matches, but after that, they were only sporadically related. Turns out they work if you follow them via how they'd look via a double-page spread, and not numerically. 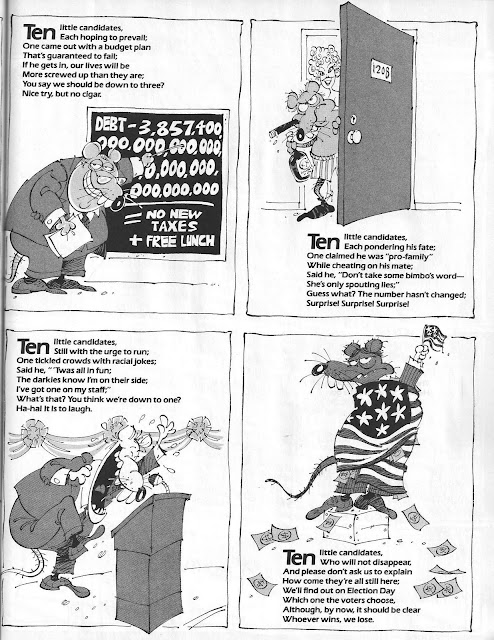 If you've ever wondered about the infeasibility of the political system, most politicians are actually lawyers who've gone on to better business and publicity. That's how they start getting their funds and arguments - from their experience in court. Does politics begin to make more sense now? 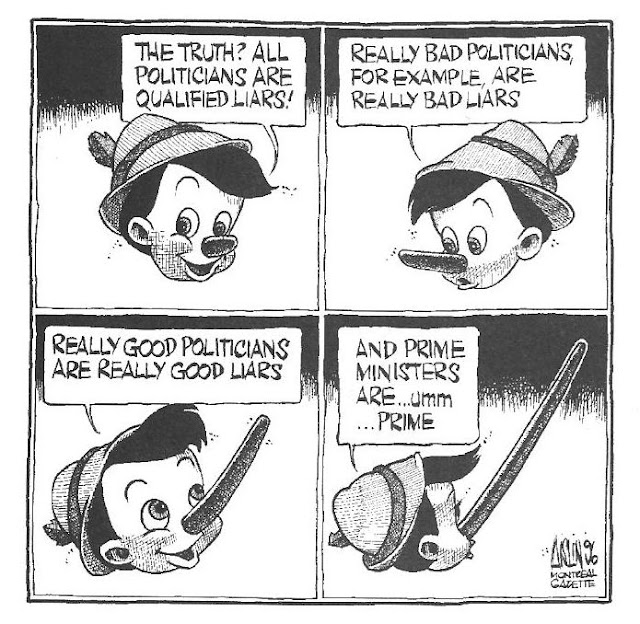 So far, the wisest course of action is not to vote for anyone with any significant value, but to vote against the most reprehensible choice, as so portrayed in this comic by Barbara Brandon, Where I'm Coming From, which is basically the Black female version of Feiffer. (Whatever happened to her anyways?) 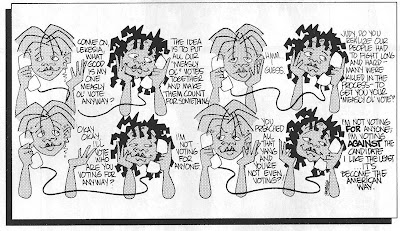 This is not a case of choosing between the devil you know and the devil you don't, but making the choice between whether you want manure shoved down your mouth, or being forced-fed high quality fertilizer. Remember when nutbars such as Ross Perot were forced to form third parties since neither side would support their views? The only problem with that strategy was that the voters couldn't take them seriously, since there was no chance of them ever getting voted into office. Sounds perfectly reasonable compared to the current nuts currently on the job. 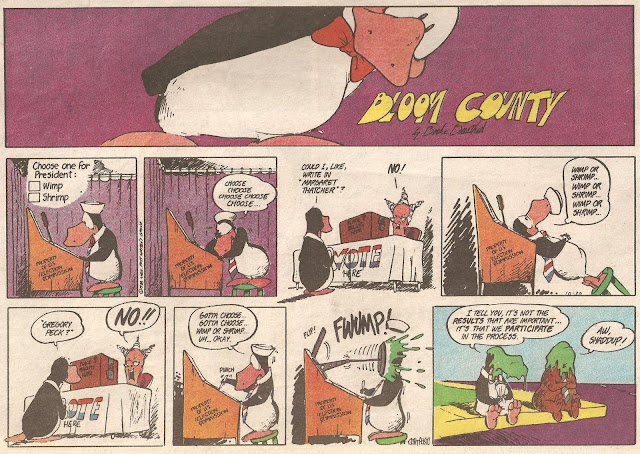 *Though that didn't stop the FBI's assault on Megaupload, though that was an entirely separate organization two years in the making, which gave a definite scare to other file-sharing programs.**

**And now there's ACTA, the European global equivalent to SOMA, which is threatening on a wider scale.
Posted by DeBT at 11:55 AM