One of the fondest surprises is finding comic treasures in unlikely places in your own abode. I found a stash of Alan Moore’s Violator comics that I always thought had been recycled since my Mom took them away from me because they were “too violent”. I found an old newspaper Sunday comic in one of the most common places for losing things - under the couch. It was slightly folded, but I still remembered the “noise” made from the comics, even though I hadn’t read them in years.

In this case, I was given the task of cleaning out my sister’s old filling cabinet full of her old art and school stuff that she didn’t want to bother looking at again. Some people are a little sensitive about revisiting their early material, since they’re understandably wary of wanting to view their work again after a long time. (In my case, I worry that I won’t be able to do justice to my early writing, and my best stuff’s behind me) Here, I found an AngloMan comic that I’d long since forgotten that was used for a Media project. In view of the anniversary of the Montreal Massacre (one day late) that led to a severe creation of gun laws, it seems like an appropriate contribution. It seems really normal nowadays, but there was extreme pressure at the time, and it almost didn’t get passed in the first place. 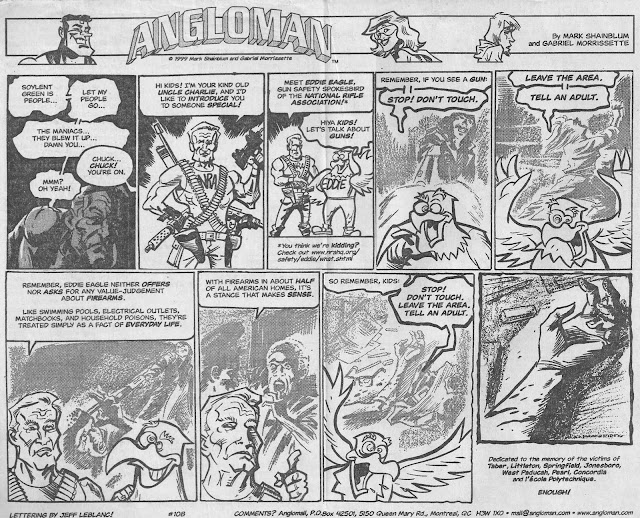 With Stephen Harper being rather lenient with the long-gun registry and undoing years of gun control, this becomes even more relevant. (Oh, BTW, that link up there no longer works, but you can see said relevant eagle here)

I thought a Conservative majority would be good for two reasons. One - it would be a refreshing change of pace, and end years of uncertainty living in a minority government. And if things turned out to be not as welcoming as promised, it would spur the opposing parties (i.e. the Liberals) to step up their games after years of confidence running the country on autopilot.

Secondly, if the Conservatives turned out to be just as corrupt and controlling as their opponents, we would be able to take charge ourselves and demand better from our government. Brian Mulroney’s stint wound up crippling and dividing the then-Conservative party, leading to a Liberal surge for the next 15 years.

Indeed, after years of being warned that the Conservatives “had an agenda” with nothing to show for it, hairline fractures are finally starting to appear on the surface of the unblemished Conservative base. Criticisms that had been silenced when Harper was a minority are beginning to show themselves, and complaints are finally rising to the surface.

However, things are no longer looking as rosy as they once appeared. With the NDP in disarray without Jack Layton’s influence, and the Liberals being reduced to a skeleton crew, this projected outcome appears to be less and less likely. Without a strong alternative to the current ruling power, let alone a strong personality that can bring politicians together, we’re in for a long declining slog.

I didn’t mean to be so depressing, since humour is more my kind of thing, but given the current state of affairs, I don’t know how long I can afford to stay silent. To make matters worse, I know that something is wrong, but I have no idea how to go about solving it. This isn’t like one of those heroic quests where you’ve got a clear-cut bad guy to go after, and have various weapons to pick up along the way. Here, there’s no guidebook, let alone a helpful roadmap to show you which path to take. It’s all open-ended, and it’s up to you to figure out how to solve things in the face of overwhelming opposition and convincing arguments that can be brought down by reasonable logic.

One of the best self-defenses the Government has is an unapproachable element that makes approaching said laws and regulations such a bureaucratic wall of red tape that it’s almost impossible to understand the underlying mechanisms without help.

All that's necessary for evil to triumph is for good men to do nothing.- somebody, maybe Edmund Burke?