With the Tintin movie opening in America's movie theaters tomorrow, we'll face the answer to the question that's plagued long-standing oponents and faithful followers of the series for years - will the property be a hit or a miss with Americans? I've often heard the argument that Americans can't identify with the boy simply because he's too much of a boy scout. But Astro Boy and Superman are also considered boy scouts in their own right, and no one disputes their popularity, even though they've fallen out of favour recently. Perhaps their fears stems from Tintin not having any powers, save for cunning, resourcefullness, and nigh invulnerability in the face of danger. Who could possibly identify with such an improbable character?

Quebeccers were fortunate enough to have a sneak peek at the movie, due to Montreal being the comics capital of Canada. Since it's more French there than anywhere else, they've got plenty of French imports that would be difficult to find elsewhere. Early reviews were mostly on the negative side, many of them from The Guardian for some reason. The fandom is equally divided between two camps of the old guard and the potential new audience. I haven't seen the actual movie itself, save for a few scenes sneaked here and there from the trailers alone, but even though what I've seen fills me with a weird sense of glee, I still have reservations about seeing an American version of the Belgian reporter. I wasn't that crazy with the Nelvana animated series, even though it was extremely faithful to the source material, because it still didn't feel like an accurate rendition of the Tintin books which I took (and still do) great pleasure reading from.

With such an iconic and popular property, it's inevietable that there would be warped versions of the boy reporter. And indeed, Tintin has been used for practically anything. From Iraq-stylized commentary, to Left-wing anarachist revolutions, to Lovecraft homages to Prison Break parodies to S-hero stories. However, no one else does elaborate satires of the Belgian detective than the country that spawned him. Herge was extremely protective of his property, correctly feeling that nobody else other than him would be capable enough of presenting accurate versions of Tintin.
Not that's stopped others from trying!

One such cameo appearance was late in Joanne Sfar's The Rabbi's Cat, where the titular cat and his owners come across a familiar figure while traversing the continent of Africa. In an interesting role reversal here, the Rabbi's cat got his power of speech from eating a parrot, only to unexpectantly lose it later after taking the lord's name in vain too many times, and encounters a dog who was capable of talking to his owner, but gradually lost his ability to do so once Captain Haddock appeared on the scene. 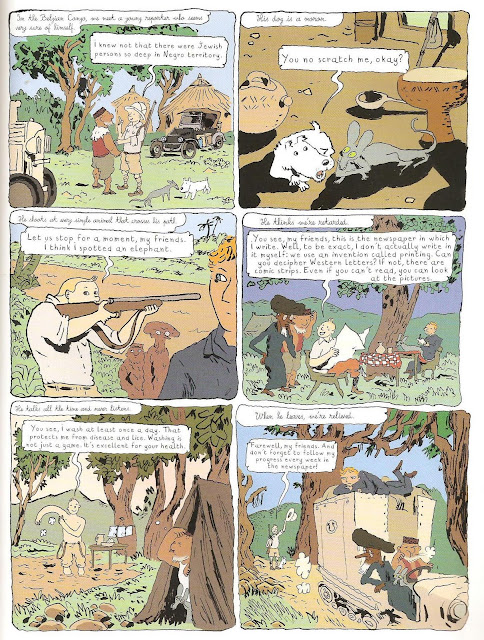 I have to admit that as much as I admire Sfar's creative output and wealth of subject material, his actual stories and art style leaves me cold. Fortunately, there's still plenty of other works to purvey even if once particular storyteller doesn't match your tastes. Heavy Metal is famous for having loads of European material between its pages of scantly-clad female covers. One particular story that popped out was Raul Fleetfoot. (Strangely enough, his name was reverted to his native language, Raoul Fulgurex in later translations) 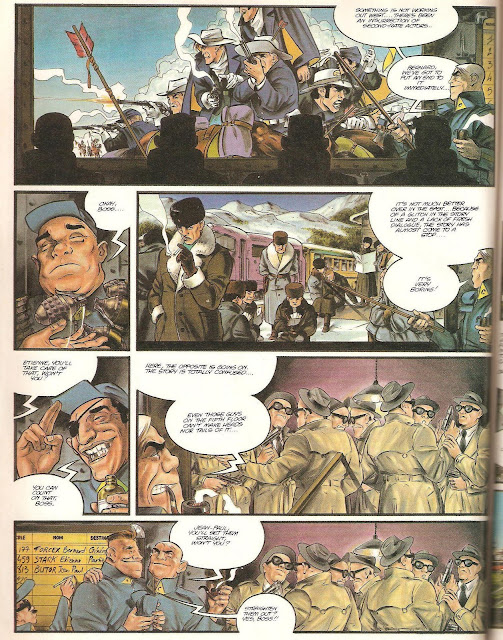 Raul is part of an organization of inspectors who're assigned to infiltrate comic stories and make sure that things are going according to the script. They do their best to make sure the story stays on target and doesn't deviate from the plot. Think of them as real hands-on editors. They have to be capable enough to deal with the same dangers they might encounter while following the protagonists. Anything ranging from sudden typhoons to cannibalistic pygmies to sudden pitfalls to immediate cancellation.

However, things start to unravel when the lead investigator falls in love with the female protagonist of a pulp fiction story he's involved with, and saves her from assassination from a generic tough guy. As punishment, he's reassigned to the high-risk section where he's in put in charge of a certain individual...

It should be pointed out that this investigator is something of an idiot. He means well, but always puts his own needs ahead of the company's, and by the end of the series, he has trouble following complicated concepts, even when they're explained in point-note form. He might've not initially appeared this way, since even at the beginning, he was somewhat bright, but as the series goes on, he becomes more reckless until he's a disaster magnet just by showing up. He doesn't even have to do anything, but just stand there and events will spiral out of control. 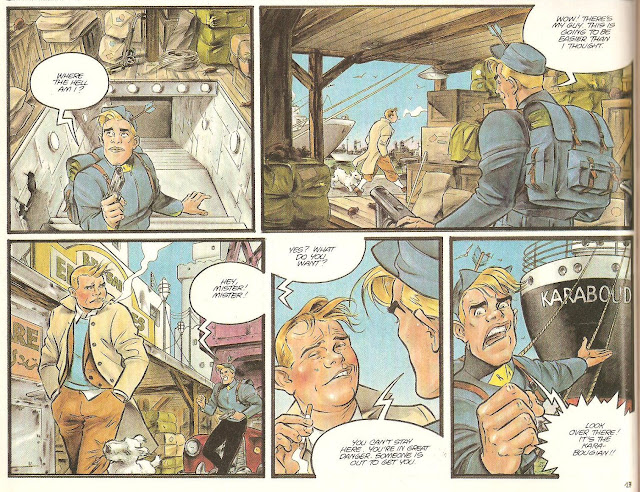 It's only when we see the Tintin character here that we see he's an unflattering portrayal of the boy we like so much. Here, he's less of an idealistic youth and more of a cynical coward who already knows the cards are stacked in his favour, and won't hesitate to run the other way once faced against the slightest hint of a threat. 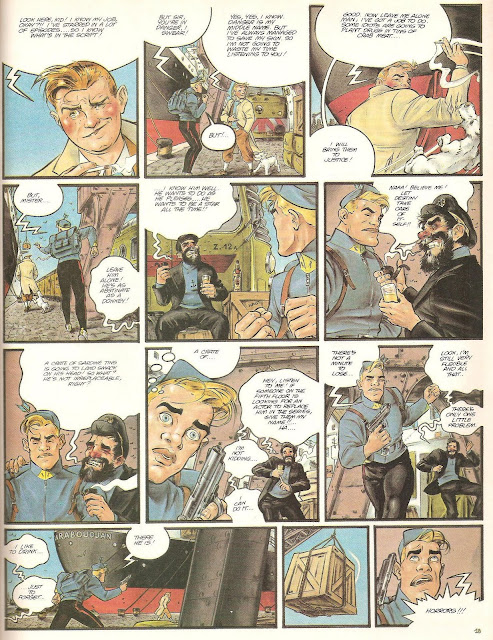 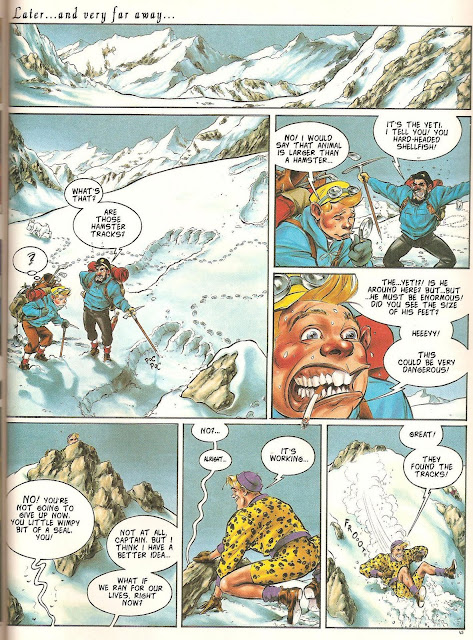 Raoul Fulgurex also has the best ironic use of a racial caricature of the offensive Chinese villain. I won't reveal it out of fear of revealing the surprise. Personally, I feel that the second story is the weakest overall, since it's just a straight parody of King Kong. The Heavy Metal version also has a significantly censored version of the giant ape's huge... red... schwong that's naturally covered up by a carefully placed screaming balloon while the hairy beast's on a rampage. (This doesn't really count as a spoiler)

However, things start getting back to lunatic levels in the third and final book where the executives become dismayed at the quality of the stories they're in charge of nowadays. They're reduced to the level of Foreign films, where there's long stretches of time, sparse dialogue and almost no action happening. As a result, they decide to "spice" things up a bit, so their services will be back in demand again. They plan out their clandestine meetings in a certain wardrobe that should be quite familiar to long-time readers. 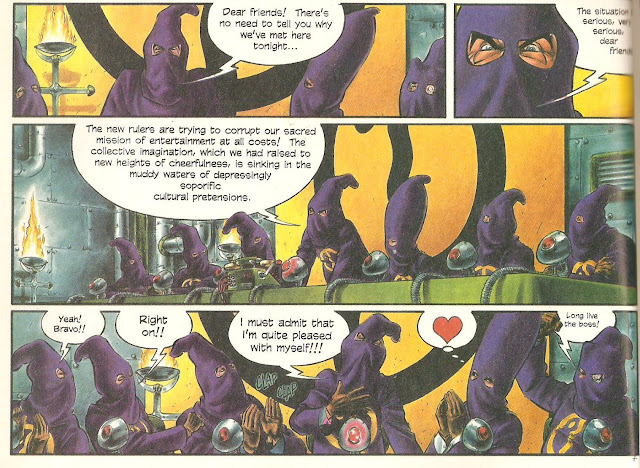 To accomplish this, they intentionally sabotage the very boring stories that're they're rebelling against. This means that the people in charge are now doing the very thing they were trying to stop in the first place. And just in case things weren't confusing enough, time travel is also involved. For this reason, a cameo appearance of Valerian (of Laurie & Valerian fame) pops up near the end. The in-joke may go completely over the heads of anyone who isn't already familiar with these two, but the basic gist is that these are time / space travelers from a future Earth. 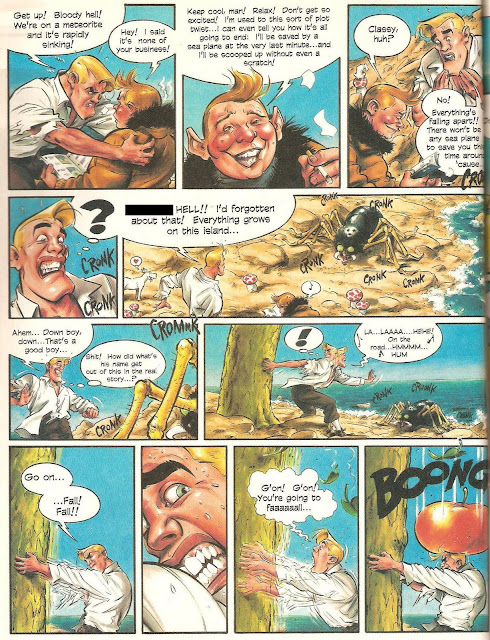 There's even a gallery of the various people who pop up in these adventures in the albums. Like so many portrayals of large casts, they're easier to appreciate when you're more familiar with the source material. Anyone interested in reading these stories can find them in Heavy Metal issues January 1992, January 1994 and September 1996 respectively. 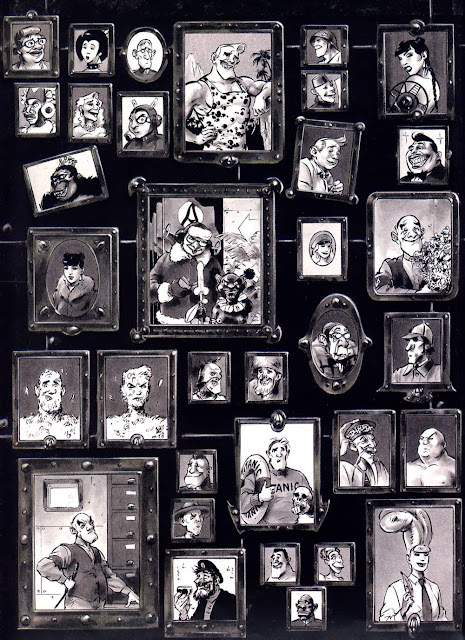 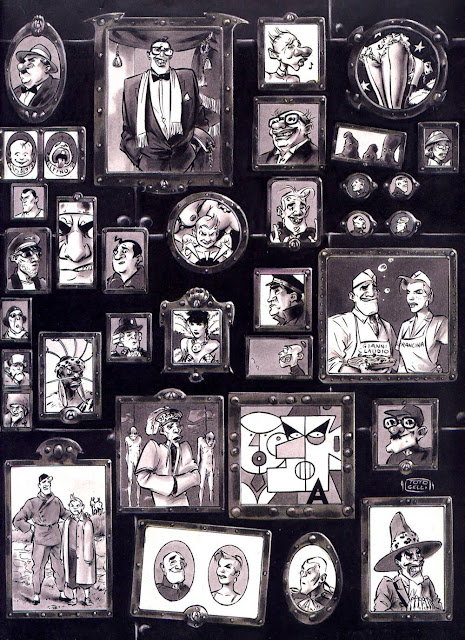 On the other side of the coin, we have what's considered to be a modern-day Tintin in the form of an anxious young boy named Jules from The Adventures of Jules by Emile Bravo. I've done my best at doing an amateur scanlation of the relevant pages to make the material more comprehensible. Any mistakes made are Babelfish's and mine. The following pages are from the second book where the titular character notices a certain newspaper article while seated next to a familiarly-clothed old man. 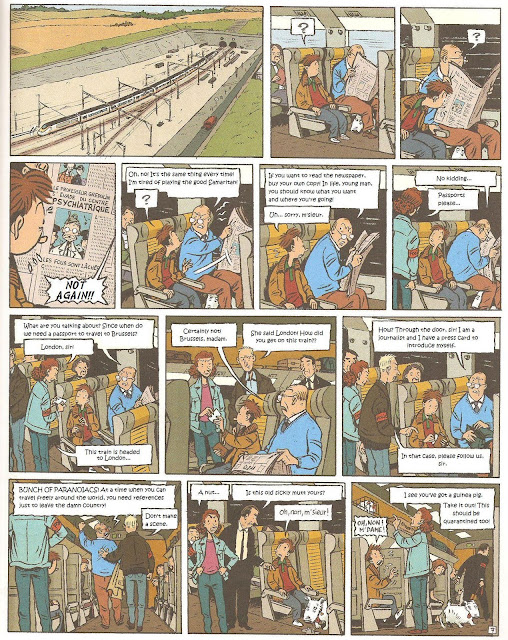 In order to save Jules' pet from euthanization, Janet's mother, Gredulin Wilkins, a renown scientist bypasses authority by proclaiming a few little white lies to ease the process along. 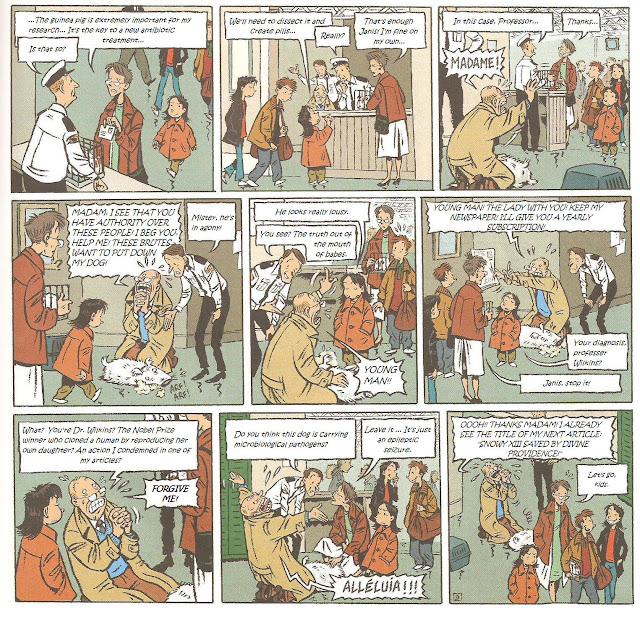 Shortly after the kids leave the train station, trouble strikes when the scientist suddenly disappears, along with Jules' pet guinea pig. 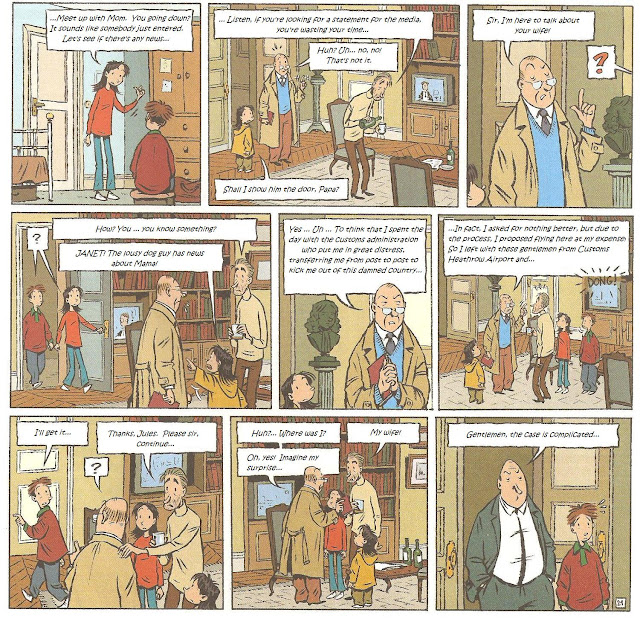 As a result of a misunderstanding, the police are on the lookout for the missing scientist, and an accomplice who's none other than Jules' pet guinea pig, which is why the children are stifling their laughter in the page below. This might be considered a slight spoiler, but the mad scientist who's photo was visible in the newspaper had something to do with Gredulin's sudden disappearance. 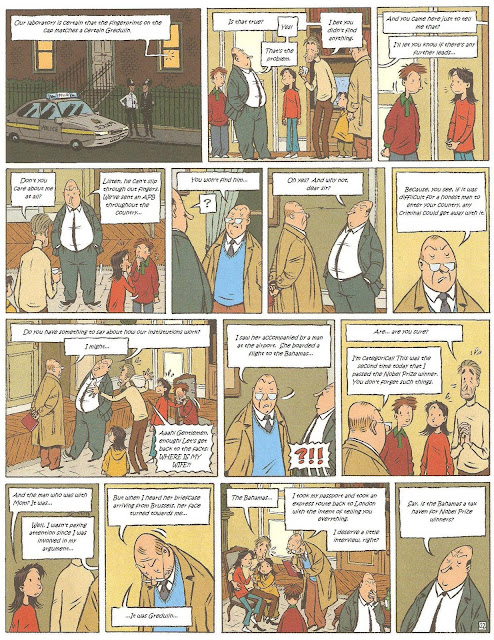 The resulting fallout from the questioning leads to the final exchange between the reporter and the policeman here: 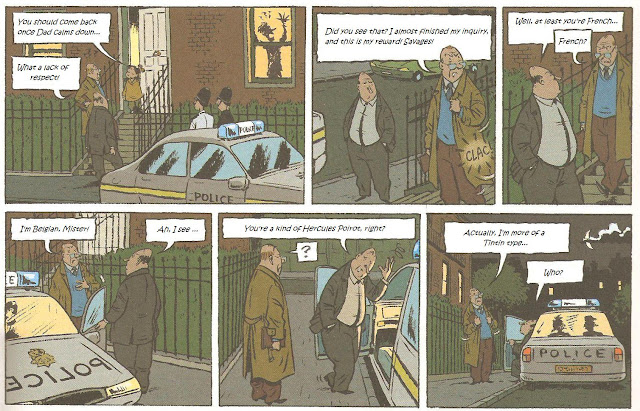 Even if Tintin tanks in the U.S., it can take solace in that it drew in a high level of international numbers and $1.45 million in Quebec theaters. That might not sound like much compared to the blockbuster numbers that're usually bandied about, but multiply that figure by maybe 50 states, and you'd get a more respectable figure that make studio heads spin. It's a little unusual that a movie created in America was first shown overseas before being shown in its home country. But when you consider that the subject material is more popular practically everywhere else, it sounds like a wise business decision. All that's needed is to wait and see if supply will create demand for the original source material, namely the Tintin books which is where the real magic takes place. I'm willing to guess the answer will be "yes".