Well, after an unusually long period of uneventual weather, it's started snowing again. Every year, Canadians live in perpetual denial that maybe, just maybe we won't get caught in a torrential downpour of snow that'll blanket our entire nation, and despite the proclaimations of Global Warming, we're still caught by surprise every year. Very often, we feel like the Coyote in the first minute of the Roadrunner cartoon, Freeze Frame. We know it's coming, but we still live in the dismissive hope that it might not come this year. It doesn't matter if the days are getting colder. Some particularly stubborn people refuse to admit the truth until the calendar says so for the first day of winter (December 21st), even as they're wading in hip-deep snow in their khakis. We're still clinging onto the memories of Summer, unwilling to believe that the season's changed, and wanting to embrace the fleeting moments of warmth, even if we have to parade around in our shorts to prove it. It's only until the first flecks of snow starts to fall that we decide now might be a good time to put our winter tires on, which everybody who wasn't a full-fledged procrastinator, had already done.

The difference from other forms of precipitation is that unlike rain, which tends to evaporate fairly quickly, even with multiple puddles around, there's little chance of snow disappearing anytime soon. What's worse, the lingering white stuff have a tendency to multiply in the forthcoming days, with more flakes coming from the heavens to punish us for whatever misdemeanors we were completely unaware of, and have no idea what we've done to deserve this.

Back when Adam was still being drawn by Brian Basset, there was a brief annual tradition that started with his kids making an unusual snowman on the front lawn.

This was followed up the next year with a more ambitious project, showing the househusband's true motivations in completing his chores. As much as he lamented his job (as opposed to working for something that actually paid), there were instances where he began to slouch off his daily duties in favor for the simpler pursuits of life, such as lazing around. This often resulted in Adam delegating his cleaning, and having his kids for doing the chores for him. This would be understandable as a way to decrease division of labour, since his family was responsible for a lot of the messes that happened in the house. Not to mention that the few perks, such as enjoying his TV shows, baseball games and sleeping in were constantly denied him, which explained why he was so cranky all the time. With his Pyrrhic victories, he was a perpetual loser, all his carefully prepared plans come to naught. 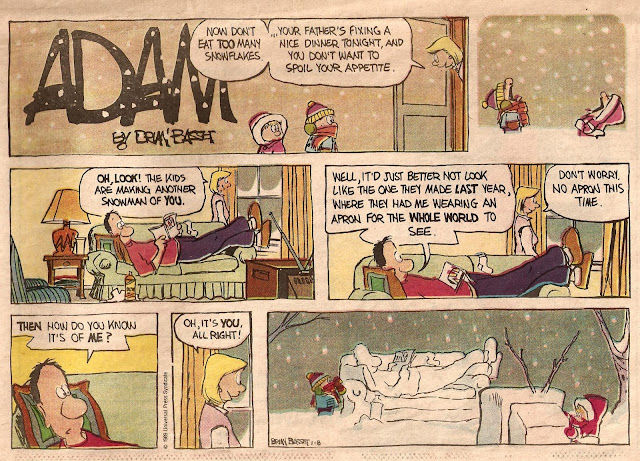 Obviously, his children didn't agree with his policies, which led to the finale presented here. Unsubtle criticism through their medium aside, you've got to admire their artistic drive. Certainly nowhere near Calvin's cannibalistic snowmen, but just as damaging.

If this trend had continued, one wonders just how far his children would've gone to get on their dad's nerves.
Posted by DeBT at 6:50 PM