A recent remixed Garfield comic had all the vowels removed. It was very reminiscent of a previous strip I submitted where I erased all the letters containing Garfield's name. (Embarrassingly enough, my submitted version missed two L's that I'd overlooked, and an L the administrator didn't notice either) As with anything relevant, I was reminded of a similar comic strip: 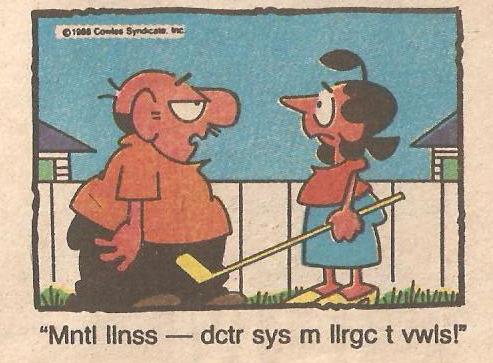 This kind of thing is not unlike the Torah, which dispenses with all hints of vowels completely, making interpreting their texts immensely difficult, unless you're already versed in the Hebrew language. With only the shape of the words, and not the vowel notations, you're heavily pressed upon recall for which sounds go where. This is made even trickier if you're not fully versed in the language. However, this kind of thing is more useful for me elsewhere. I've had plenty of practice putting together bits and pieces of missing words, thanks to some defective Close Captioning.

When I was still watching TV with an antenna (positively antique - I didn't get cable until the turn of the century) care had to be made so that the angle of the receiver would have good reception for the majority of the channels. Otherwise, it would be impossible for me to understand what was happening, since the captioning would be a complete mess, the picture would prove useless, and audio was no help. Even if the reception turned out to be perfect, there was still the threat of the VCR tape itself becoming corrupted from overuse. I found that I could prolong the tape's use by taping over later hours that hadn't been used yet, and taping over random intervals instead of pinpoint hour times. This made rewinding to past shows an immense chore, but was worth it to prevent having even a single sentence left out.

And even then, that wasn't a guarantee. Sometimes, the show itself would have wonky captioning where the words would hardly show up at all, or they'd come at slow write-as-you-hear intervals similar to the news channels. What would make this even more irritating would be shows where the captioning was inconsistent, but the commercials were perfectly okay. There's a sponsor who knows where their priorities lie. 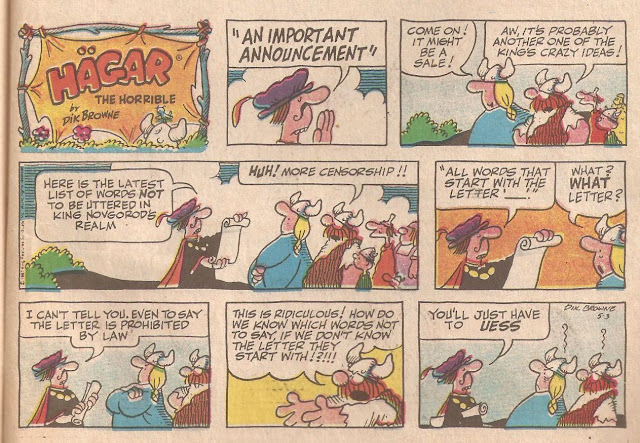 Very often, missing little snippets of dialogue or conversation is a great hindrance in jumping into a conversation. Too often, I'm confused about the nature of the dialogue. I have no idea what these people are talking about, their rapid-fire pace makes it extremely difficult for me to find a lull or break to jump in; and very often, these people won't always be facing me when they talk, so I can't read their lips from the side. It's equivalent to watching two different TV shows on two televisions from across the room, and only getting bits and pieces of what's going on. The ping-pong nature of the dialogue means that I'm constantly playing catch-up in trying to decipher their latest words, and only catching the last snippets of their words. And this problem is multiplied if it's taking place in a noisy environment, like a party, and other people decide to join the mix. As such, any attempts to intervene without help is a losing cause. This is why it's extremely necessary for me to have an oral interpreter present for group gatherings, since any attempt to engage otherwise would only end in confusion.

However, it's not enough that people face me and speak s-l-o-w-l-y and clearly in a preferably quiet environment. I also need some natural gestures to help guide me through the conversation and have certain key words highlighted. A lot of words look invisible on the lips, and sound too similar to each other. Emphasizing the first letter of each important word is a big help, but also using hand gestures to animate and illustrate verbs that might otherwise be difficult to understand. For example, somebody said that they were something that I thought was either "Shaft her", or "Chapter". But by holding an invisible steering wheel and turning slightly, I understood what he was saying was "Chauffeur". It's these little movements that help me better understand what's being said. Alternately, they could simplify it by substituting "driver" instead. 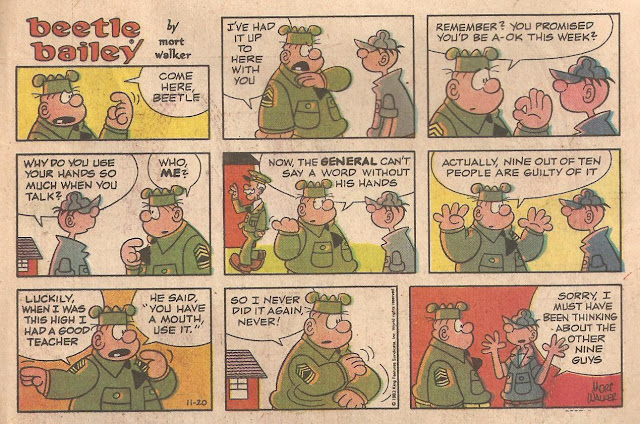 Indeed, with Close Captioning, a lot of sentences were trimmed down or reduced to cut down on speed-reading time. (Because people watch TV to relax, not to do H-work) There were a lot of subtleties on Sesame Street that I missed because not everything that was said was shown. And trying to read a Muppet's lips is no help either. It's equivalent to reading Old-school Anime character's mouths.

Because I relied on the decoder so much, I became so attuned to its use that I resented shows that I wanted to watch, but couldn't, because they weren't close captioned or subtitled. So it was a complete surprise when a movie was shown on the big screen at my school, and I asked if captioning was possible, because maybe everybody else might also want to know what was going on. I found out that day that people normally prefer to see movies without annoying black bars at the bottom of the screen obscuring the action. It was a real eye-opener for me, but it left me feeling very much out of the loop, because I still couldn't tell what was really going on without reference.

Another area I have difficulty in are words that sound completely different from how I think they're pronounced. For the longest time, I thought anxiety was pronounced Anhk-I-Eh-Tee, instead of Ang-Zy-Eh-Tee. Likewise, I pronounced Epilogue as Eh-Pile-Oh-Goo, instead of Eh-Pill-Log. It's not the kind of word that comes up often in casual conversation.

While not being able to watch as much TV as I can because not everything is close-captioned or subtitled is a great deterrent at keeping me off my duff, it still feels like a disservice because I'm left out of some mainstream entertainment the rest of the world enjoys in my absence. One instance was where a Facebook friend recommended the British series Are You Being Served? Upon his recommendation, I started watching a transcript on Youtube with transcribed audio, but the results were laughably awful. At the 0:50 mark, the following dialogue is "spoken":

"Insurance against African nations. The seller was better look the other way pedophile made."

When in actuality, what was really said was,

"I'm sure it's against staff regulations. Still, I'm always prepared to look the other way."

Part of the reason it's so lousy is because it's transcribed by Google, which takes the most commonly heard sounds, and chooses the top searches, rather than deciphering them properly. As a result, since it's interpreted by a computer rather than a human, all we get is babblespeak. So far, Youtube captioning is still in its infancy, though I've been told that early captioning on TV was also a mess before it became more widespread nowadays. 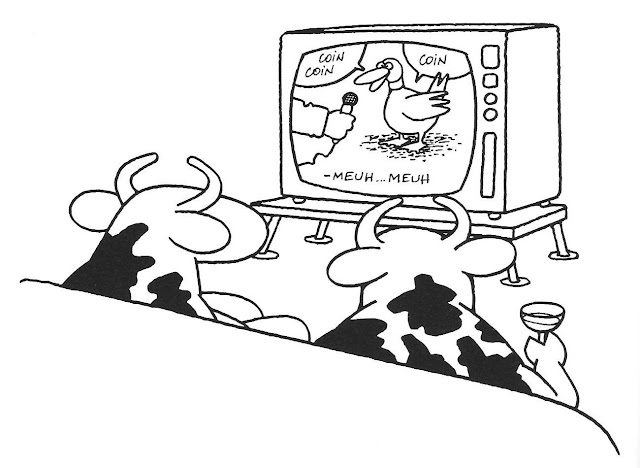 As long as we're on the subject of captioning, I might as well mention another pet peeve of mine - DVDs where the main movie/show is captioned/subtitled, but the special features are left alone. It's like the companies don't even bother to give special attention to the hard-of-hearing since "they wouldn't be interested". Well, we'll never know if they're not transcribed, will we? It's the rare features that go out of their way to make sure everyone is included, and those ones I am grateful for, even if the special features are nothing more than self-congratulatory interviews of the cast members.

At least they're not as bad as DVDs that just flat out refuse to caption any of their shows. What makes this more painful is if any of these shows were Close Captioned on TV, but aren't captioned on the DVD itself. I can't enjoy the David Suchet version of Poriot, Degrassi the Next Generation, and a bunch of other shows I foolishly thought would be available later. The greatest recent offender is FlashPoint, which had captioning for the first season DVD (special features included!) but was completely absent in the second season DVD. I have to catch the second season on reruns so I can catch up on what's happened.

Another annoying feature of Close Captioning is when the text is several seconds below the spoken lines. It's like having the sound be out-of-sync with the actor's lips, and it reduces my enjoyment of the show. The worst offenders are channels where the captioning is not two or three seconds behind, but are 10 seconds behind the pace. This means that I have to memorize the actor's movements beforehand, and then choreograph them with the words later. This usually isn't too bad when there's only two characters on the screen, but it play havoc on my memory when there's a brisk back-and-forth conversation between three or more people, with no clue to who's speaking next. This is also another feature of interpreting - I'm usually always two or three seconds below the conversation, and usually have to act quickly to play catch-up if I want to contribute to the conversation. If I wait too long to say my piece, I'll lose my turn during the heat of the moment. 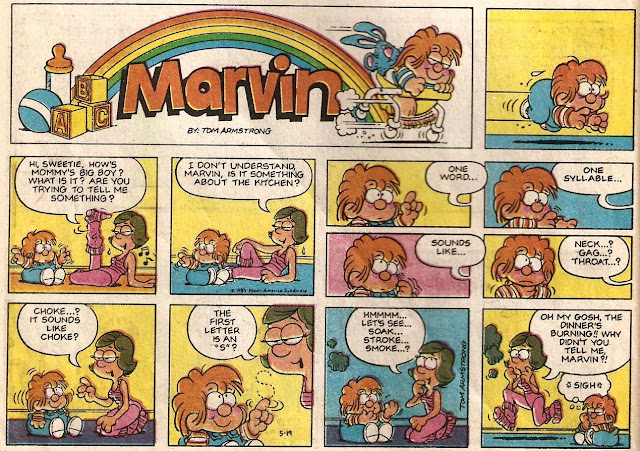 This is why comics is my medium of choice. The only inherent danger of not understanding what anybody's saying can be attributed to ink smushed across the page, word balloons improperly placed, the artist's failure to get the writer's script across, or lousy panel layout. But at least the lines are there to be seen, and reread at our leisure. If I want to know what somebody's said, I need them to retrace their words, and chances are they'll never quite capture the naturality of their first time.

For as much as people complain about comics not being able to compete with movies, they should be concentrating on what comics can do that movies can't. Until these annoying setbacks in enjoying DVDs is resolved, comics will be my drug.

Addendum - I have no idea if Blue-Ray resolved this problem, but I have no desire to get one, when DVD works just as well, and I can stop the DVD and resume from my last playspot.
Posted by DeBT at 7:05 PM