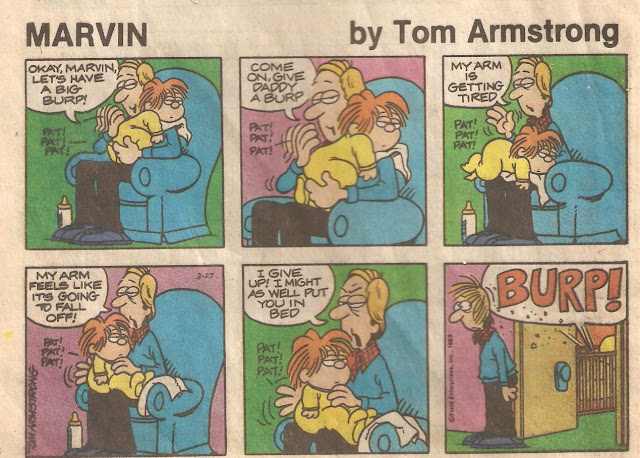 Before Tom Armstrong became better known for creating a baby comic, he made his first debut with a collaboration with Tom Batiuk. (Yes, THAT Tom Batiuk. Apparently, there are things in cartoonists' pasts that are more interesting than the strips they create) However, since I know practically nothing about John Darling and don't have any scans of him, we'll have to settle for the baby. 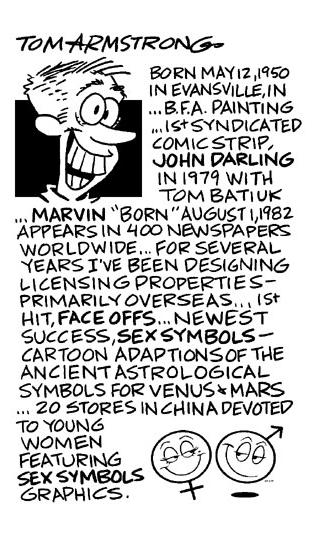 Marvin was also the first instance I ever got of a comic being further condensed. While most comics are normally shown without the title page and throwaway panel, my newspaper outdid themselves by removing several panels that weren't necessary. 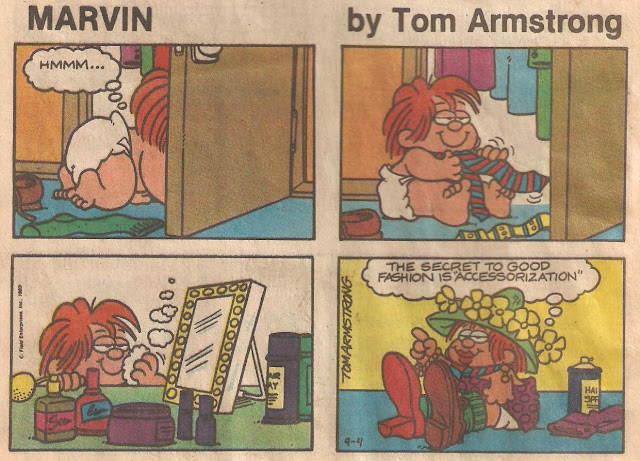 In other cases where the other panels were mandatory to the punchline, they were squished together. As far as I know, no other strip suffered as much as Marvin did, but it was one of these things that help spurn the additive/reductive element of comics. 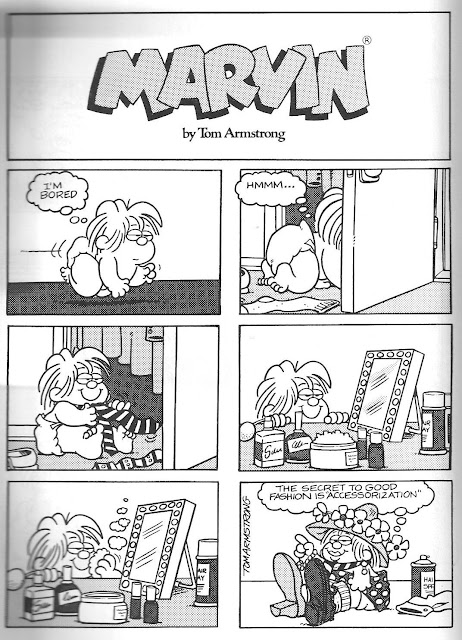 There's been some speculation that Marvin was inspired by Garfield, since it shares some striking similarities -both feature a small destructive creature that eats a lot and only communicates by thinking. Since Marvin was debuted around the time that Garfield started to take off, it's not unreasonable. The difference is that one is a baby, and the other is a cat. For some people, there's not much difference, save that babies eventually grow up, unless they're cartoon babies. 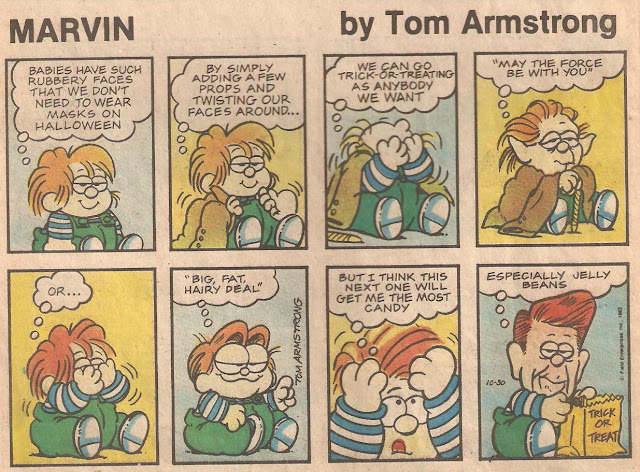 Now there's a scary thought for you - babies' faces frozen in the shape of famous dictators. I have to admit that when I saw Marvin's face in the last panel there, I thought he was impersonating Frankenstein. I wasn't very immersed in politics, let alone American politics. I didn't even know we had a Prime Minister until Brian Mulrooney got caught up in multiple scandals. At the time, I thought he was a nice guy. (I was young!) 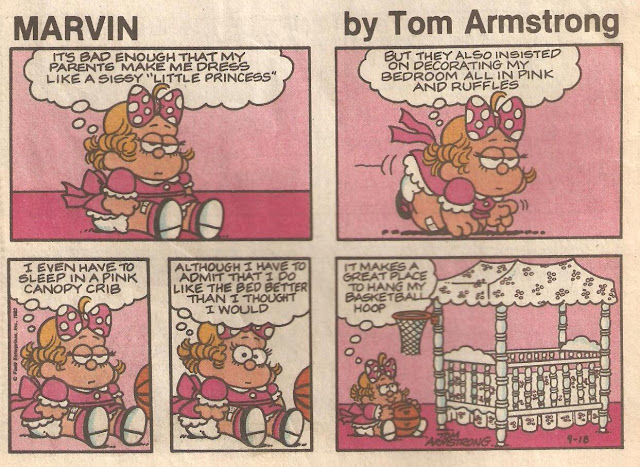 The Garfield comparison is even more pronounced when you take Cousin Megan in consideration. She's clearly the closest thing to competition that Marvin has. From these few examples, we get the sense she's clearly more ambitious than her cutesy outlook implies. 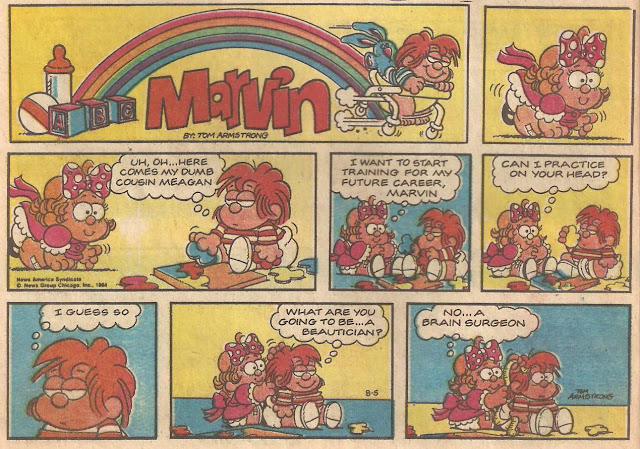 However, a cursory check on TvTropes showed that she hadn't shown up again in years, and was only briefly mentioned in a recent strip. 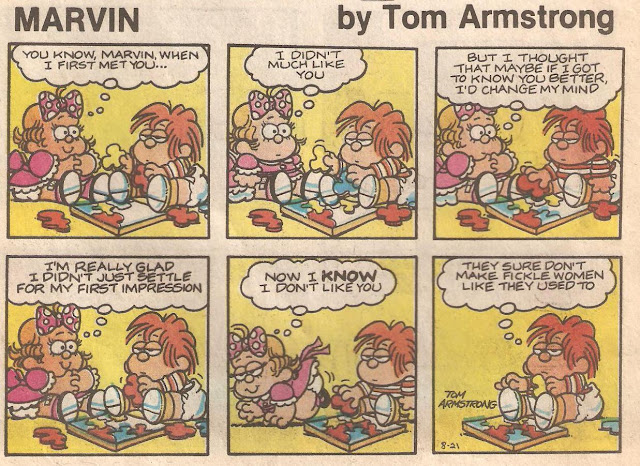 There was some controversy when Marvin started changing, not just in his character design, but also when he started expressing actual human speech and interacting with his parents without resorting to baby talk. In addition, he started standing up and walking as opposed to crawling around. But there was a strip that showed he was capable of this much earlier. 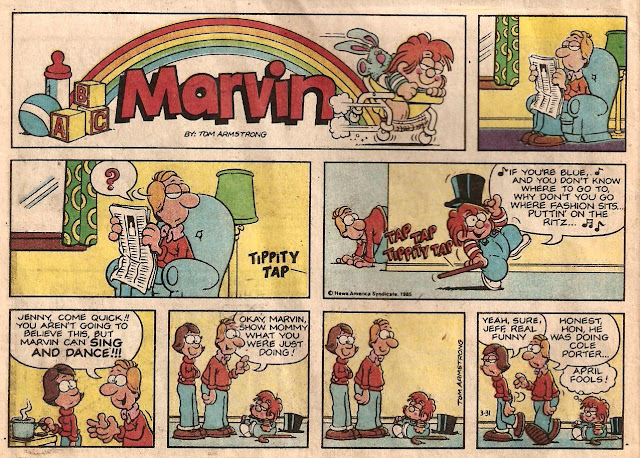 For those curious where the title image of Marvin running in his baby stroller comes from, this strip looks like a good originator as any. 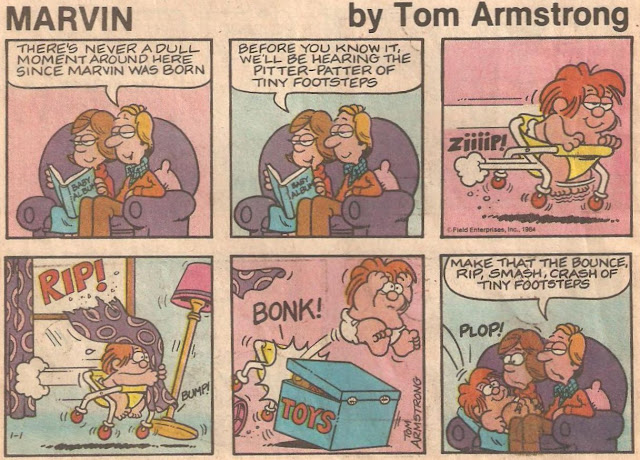